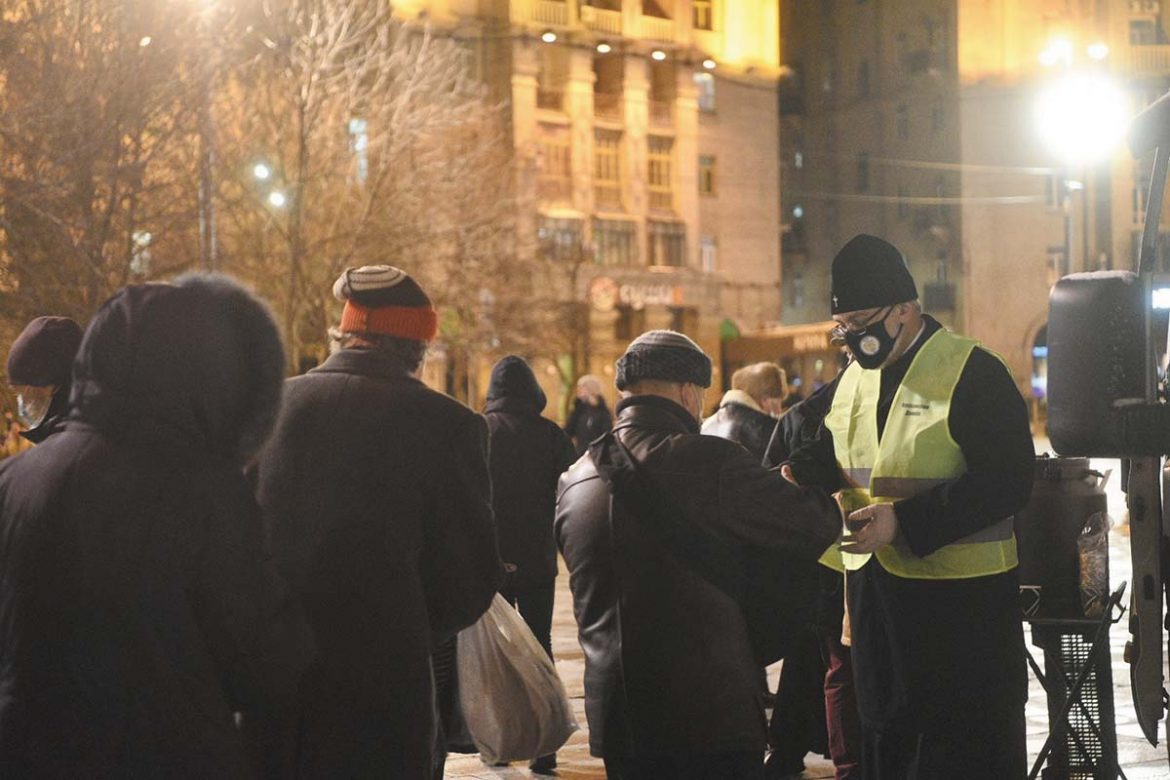 Archbishop Daniel (right) distributes nourishment on the streets of Kyiv in March.

SOUTH BOUND BROOK, N.J. – The Saint Andrew Ukrainian Orthodox Society in 2020 marked its 30th anniversary since it was founded in December 1990. The organization’s mission continues to support the rebirth of the Ukrainian Orthodox Church in Ukraine and to promote Christian ideals through charitable and humanitarian efforts.

Its humanitarian aid projects have helped refugees in Ukraine, with aid provided in Kyiv, Pereyeslav, Chernihiv, Ternopil, Chernivtsi and Mariupol. Through its Soup Kitchen Program, which is boosted by the annual Souper Bowl Sunday soup fundraisers that are organized by local chapters of the Ukrainian Orthodox League of the U.S.A., over 4,000 hot and nutritious meals are provided per month at cafeterias, churches and social service centers in Ukraine.

While in Kyiv during March of this year, Archbishop Daniel, who was joined by the Rev. Taras Naumenko of St. Vladimir Ukrainian Orthodox Cathedral in Philadelphia, participated in the Soup Kitchen Ministry of the Orthodox Church of Ukraine (OCU). With the blessing of Metropolitan Epifaniy of the OCU, a food station was set up with the assistance of Roman Kholodov, Ivan Mychko, Deacon Ivan Tsiko, Vitaliy Fernati and Deacon Andriy Sydor. More than 200 individuals were cared for and fed in the early spring temperatures that dipped below freezing. The need is great, Archbishop Daniel noted, who said he was honored to have been able to assist these people on behalf of Metropolitan Antony, the clergy and the faithful of the Ukrainian Orthodox Church of the U.S.A. (UOC-U.S.A.), especially the members and supporters of the St. Andrew Ukrainian Orthodox Society.

St. Andrew Society in 2020 successfully raised funds and supported ongoing and new projects, including assistance to the elderly in Kyiv and in the Donbas region, various outreach projects that support the needy, including the production of sanitizers and providing supplies for Social Services of the Orthodox Church of Ukraine, and direct financial aid for families devastated by floods in western Ukraine in the spring of 2020.

The St. Andrew Society also aids seminarians studying in the U.S. through the Rev. Lewytzkyj Seminarian Scholarship Foundation, which was founded in 1990 in memory of the Rev. Dr. Wolodymyr Lewytz­kyj (1896-1969). More than 800 scholarships have been awarded since 1990.

For 2020, St. Andrew Society has provided philanthropic assistance totaling $55,276 to those in need. This ministry is possible through the support of the faithful, the parishes and chapters of the Ukrainian Orthodox League.

In the planning stage, new charitable projects are being developed for the Poltava, Vinnytsia and Khmelnytsky regions.