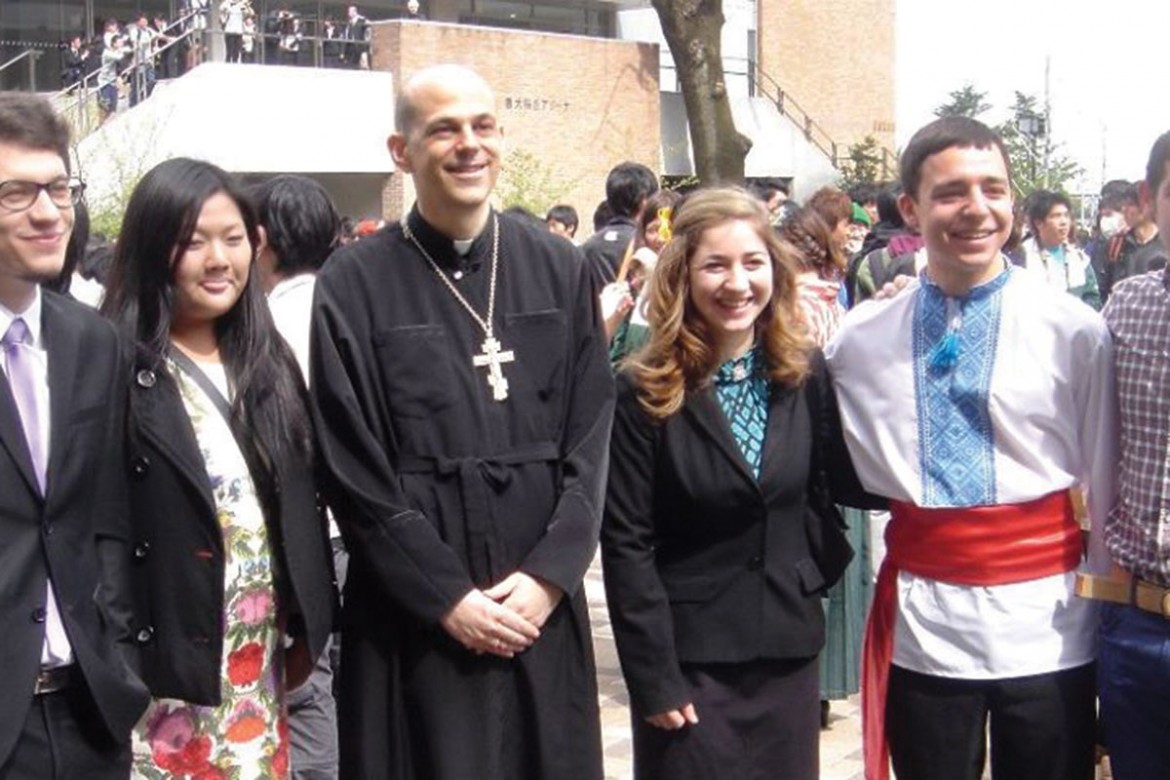 The Rev. Paul Koroluk in Tokyo with students of the Tokyo University of Agriculture on graduation day in 2013.

TOKYO – Orthodox Christianity was first introduced to Japan in the 19th century by the Russian Orthodox missionary and saint, Nikolai (Kasatkin, 1836-1912). The fruit of that work is the autonomous Orthodox Church in Japan, which in 2006 comprised 67 communities served by two bishops and 22 priests.

The mission’s founding is tied to the unique life path and the priestly vocation of U.S.-born Paul Koroluk. What brought him to Japan in the first place was not religion but Aikido. The martial art was his passion, and he wished to pursue it here after completing studies in nuclear engineering at the University of Michigan. In Japan, he met his wife, Misako, whose curiosity about his religious background eventually led to her conversion to Orthodoxy – and to Mr. Koroluk’s rediscovery and reconnection with his Ukrainian Orthodox roots.

In 2004, a small group of Ukrainian families in Tokyo turned to the Ukrainian Orthodox Church – Kyiv Patriarchate (UOC–KP) with a request for the creation of a mission. The Patriarchate responded favorably, Mr. Koroluk enrolled in theological studies through the Antiochian House of Studies and was ordained by Patriarch Filaret (Denysenko) during his visit to the United States in 2006.

Today, 25 years after first arriving in Japan, the Rev. Koroluk is pastor to the Ukrainian Orthodox mission and an adviser to a Japanese intellectual property law firm. His remarkable background serves him well in his work with a community that is committed to advancing Christian universality by embracing diversity. He refers affectionately to his priestly vocation as “the best job in the world” and insists that the mission is the outcome of the dedicated work of all the faithful together.

Meeting in a borrowed space

Since its first liturgical service on Palm Sunday in 2007, the mission has assembled semi-monthly and on feast days for liturgical celebrations and sacramental services. Without a church building of its own, the community benefits from the generosity of Anglican Bishop Ohata of Tokyo and meets for worship at St. Alban’s Church in the Kamiyacho business and diplomatic district in central Tokyo, just across the street from the Tokyo Tower. Its services alternate between Ukrainian-English and Japanese-English.

A small community founded by and originally composed of Ukrainian expatriates, St. Jude’s is open to people of any nationality and welcomes “all who come with sincere intent, whether or not they are Orthodox or Christian.” Current attendance at services can vary from six to 60, with major feasts and special memorial services drawing the highest levels of participation.

Ukrainian Catholics have also participated actively in the mission’s services at various times. As Father Paul explains, “In the beginning, although the founders, with one exception, all identified as Orthodox, Greek-Catholics became the most faithful members of our community – they came every week.”

The community includes students from Ukraine, a number of whom are enrolled at the Tokyo University of Agriculture, as well as transient expatriates on their way to other countries. For most, Japanese is the primary language of communication, while those who are in Japan only for a short time rely on Ukrainian or English. This year’s Easter celebration included faithful of Japanese, Ukrainian, Hungarian and Greek ethnic backgrounds.

Like Eastern Christian parishes elsewhere, St. Jude Mission is committed to the ethnic roots and traditions of its mother Church, yet balances this with openness to people of all cultures and backgrounds. This inclusive perspective has shaped the mission’s vision and informs its strategy as it looks to the future. By attending to the ethnic and cultural diversity of its members, the mission cultivates intercultural exchange. Traditional forms of Ukrainian Orthodox creative expression, such as the writing of icons, the decoration of Easter eggs, the preparation of the traditional, 12-course Christmas Eve meal and the staging of the Nativity play (Vertep) are enriched through the active participation of Japanese adults and children.

Cultural integration also works the other way, and Father Paul speaks proudly of a significant recent accomplishment: “We completed, and now use, the first modern Japanese translation of the Liturgy of St. John Chrysostom…. However, the Orthodox Church in Japan–Moscow Patriarchate continues to use the translation by St. Nicholas, which is in an aristocratic, Meiji-era Japanese that few people in Japan today can understand.”

The mission’s ministry includes remembrance of the past and respect for those who fell in wars and other disasters.

Its Facebook site (www.facebook.com/StJudeTokyo) reflects the community’s activities along with significant religious events in Ukraine that inspired them. A case in point is a photo of Patriarch Lubomyr Husar (Ukrainian Greek-Catholic Church) with Metropolitan Dymytriy (Ukrainian Orthodox Church–Kyiv Patriarchate) at the Kruty memorial service, which took place in Kyiv in 2010. At the request of its members, the Tokyo mission held its own requiem service in 2013 for the repose of those who perished at the Battle of Kruty.

When Ukraine’s Ambassador to Japan Mykola Kulinich suggested a memorial service to honor the victims of the 1932-1933 Holodomor, St. Jude Mission began to organize annual ecumenical services, at which Orthodox, Catholic and Protestant clergy have offered prayers in Ukrainian, Japanese and English.

And in March 2012, preparations were under way to mark the 25th anniversary of the Chornobyl nuclear disaster and the first anniversary of the Tohoku earthquake and tsunami, which caused the devastating Fukushima Daiichi nuclear disaster. The mission shared a prayer of Patriarch Filaret for the victims of both disasters. Recited in Ukrainian Orthodox parishes throughout the world, that prayer had a special resonance at Tokyo’s St. Jude Mission, whose Japanese and Ukrainian members recited it at an ecumenical memorial service. No doubt it was also integrated into the community’s historical narrative and emerging identity.

Looking to the future

St. Jude’s is a trailblazing church community that promotes openness over exclusion, and Father Paul points out that the mission learns much about hospitality from its Anglican hosts. It has become a meeting place across ethnic and cultural boundaries, one that consciously seeks to demonstrate the universality of the faith through its activities. In practice, this means opening the door to all who seek spiritual services – even across denominational lines. 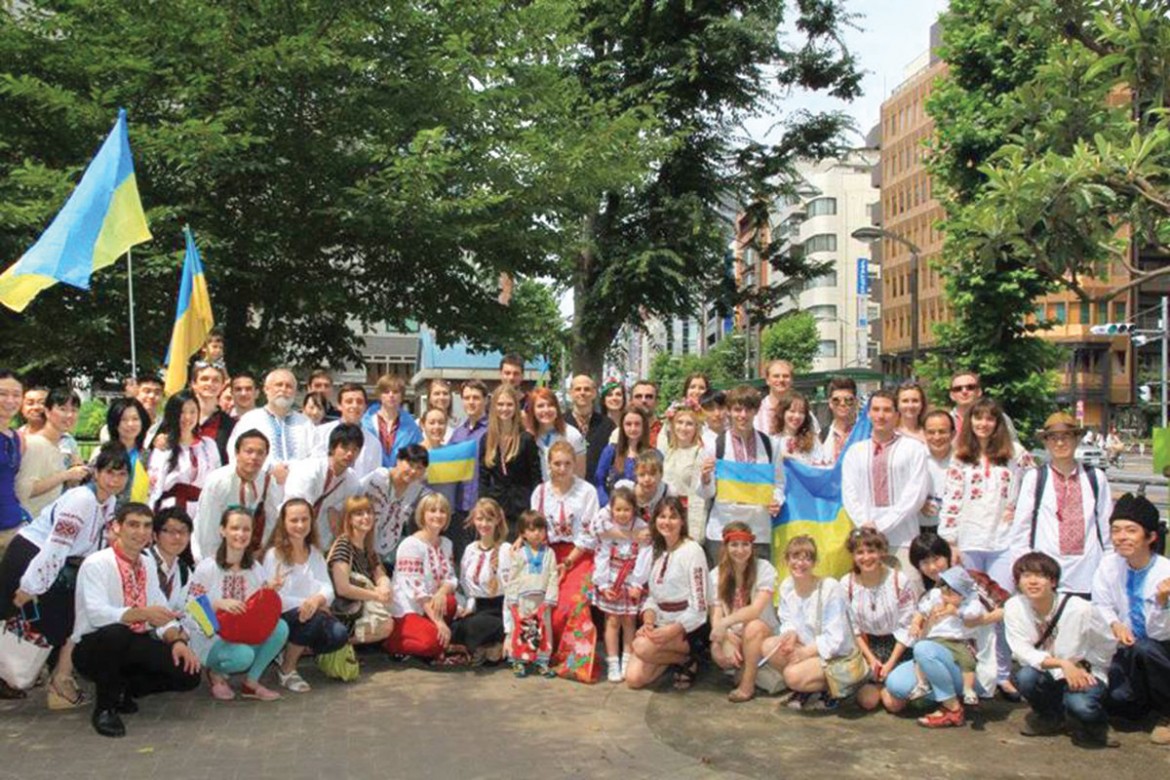 As the Rev. Koroluk explains, “The painful recognition of the wounded nature of the divided Church, [the requirement of Orthodox baptism in order to receive sacraments] normally excludes those who consider themselves members of a non-Orthodox communion, although the faithful of the Catholic Churches who for good reason wish to share are normally welcomed. In Tokyo, this most commonly applies to faithful of the Ukrainian Greek-Catholic Church.”

On this matter of pastoral openness (or ekonomia), Father Paul has noted similar perspectives and precedents on the Catholic side. For example, Cardinal Husar drew an important distinction between Orthodox-Catholic theological differences and complemetary practices of the faith as he invoked the position of Metropolitan Andrey Sheptytsky during World War II: “when an Orthodox cannot find an Orthodox priest, we don’t deny him the sacraments, especially confession and holy communion.” Likewise, the Pontifical Council for Promoting Christian Unity cites necessity and spiritual advantage as instances where Catholics may receive sacraments from a minister of an Eastern Church.

Spiritual needs and pastoral practice are shaping the character of the Church in Japan, along with theological considerations. The Rev. Koroluk elaborates further on the resulting, forward-looking and dynamic understanding of identity: “the Ukrainian Orthodox Church in Japan is a Japanese church. If it succeeds, the Japanese will recognize it as a Japanese church worshipping in the Japanese language and teaching a faith that should be universal to all. However, because it has been planted with seed from Ukraine, seed preserving the precious wisdom and worship of the ancient Christian Church, it should also remain a place where all Orthodox, especially Ukrainians, will, upon entering, immediately feel at home. It will be a place where the traditions of its founders, Orthodox and Catholic, from Ukraine, Japan and the diaspora will merge and meld, revealing and not disguising the boundaries of its eternal, unassailable core.”

Thus, the mission is striving to balance its Ukrainian Orthodox origins, its diverse composition and its Christian universality. “Although we were founded by Ukrainians, and try as hard as we can to be true to our roots, we are definitely a church in Japan – a Japanese mission. We are multilingual and multicutural…. We very much honor our Ukrainian roots, we are organically part of the Ukrainian Orthodox Church. One part of our mission is to make sure that there is a home where Ukrainians living in Japan will feel safe and comfortable, without having to abandon a part of themselves. But before we are Ukrainian and before we are Orthodox, we are a Christian Church – we represent Christ.”

The St. Jude Mission’s founding idea of ministering to the spiritual needs of Ukrainian Orthodox faithful in Japan is expanding to an ever-wider outreach and encounters across cultural and denominational lines. Rooted in the Byzantine-Kyivan tradition, the Ukrainian Orthodox Church in its Japanese incarnation is writing a new chapter in its historical journey. In the process, it is carving out a new sense of identity in its particular, intercultural setting.

Andrii Krawchuk is professor of religious studies at the University of Sudbury (Ontario). He is co-editor, with Thomas Bremer, of “Eastern Orthodox Encounters of Identity and Otherness” (forthcoming with Palgrave Macmillan). In Tokyo last August, he attended meetings of the executive of the International Council for Central and East European Studies, which is planning its next world congress to be held in Japan in 2015.