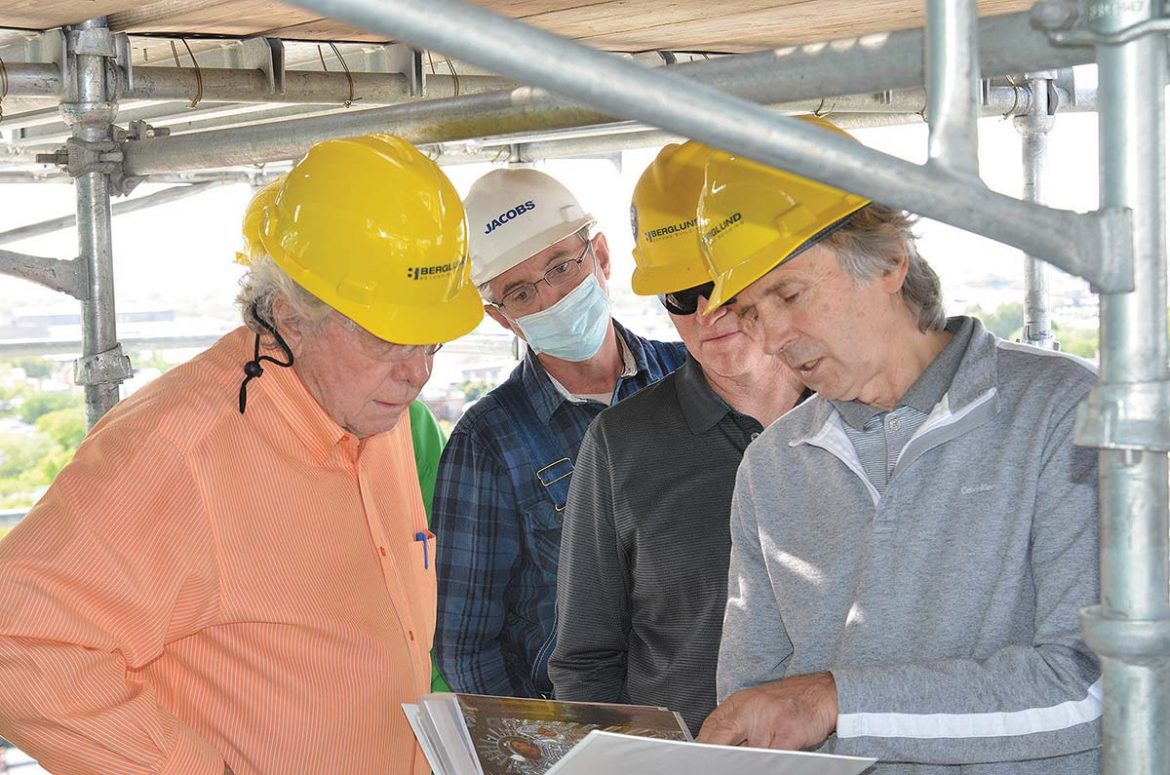 CHICAGO – The ongoing capital campaign, “Building Our Faith Together, in Unity and with Gratitude,” of the St. Nicholas Eparchy began nearly two years ago on May 12, 2019. It was undertaken to sustain the long-term viability of the St. Nicholas Eparchy and to restore the 114-year-old Cathedral in Chicago’s Ukrainian Village, particularly the cupolas and roof.  Considerable progress has been made in the eparchy’s effort to raise funds for the project, as campaign donations have surpassed $2.4 million. 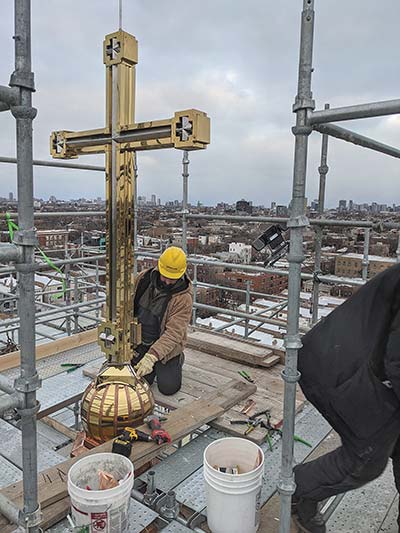 Workers install the new cross atop the cathedral.

In addition to restoring the cathedral’s cupolas and roof, funds from the campaign were also designated to seed an endowment fund to better support all parishes and missions within the eparchy, and to further develop eparchial resources, particularly in the areas of administration and the continuing education of priests, deacons and laity.

The eparchy – a community of faithful from 43 parishes, missions and monasteries in the United States that range from Michigan to California and Alaska – also announced that considerable progress has also been made in the restoration of the cathedral and in the pursuit of the other Campaign goals.

Given the magnitude of the cathedral restoration, the project has been divided into several stages. The first stage of the project was recently completed.  That stage addressed the urgent issues in the roof and copula above the sanctuary.  Work on the second phase has now been initiated.  That work will address the entrance and front end of the cathedral.  The eparchy thanked the Renovation Committee and the clergy for their leadership and efforts. As a result of that work, the engineering and structural issues have been resolved.

Stage 1 of the project also provided disappointing news and clearer insight into the extent of the damage that has taken place over more than a century. It is now known that the total cost of the restoration will considerably exceed the initial estimate of $2,650,000 and will total more than $5 million. In light of this, the Capital Campaign will continue beyond the initial three-year time frame and will be expanded to include new grants and other new fundraising channels of support.  Also, a fourth stage will be added to the Campaign and will encompass geography beyond the Midwestern and Western United States.

Bishop Benedict (Aleksiychuk), bishop of St. Nicholas Eparchy, and the Capital Campaign leadership are committed to achieving all three goals of the Campaign, namely: completing the Cathedral restoration; supporting all parishes, particularly those with the greatest financial needs; and developing administrative and educational eparchial resources.

The eparchy has appreciably moved forward with the renovation, and has made limited but not inconsiderable progress on the other two goals. Specifically, $100,000 has been allocated from the Campaign to seed an endowment fund to support the eparchy’s parishes, $20,000 has been raised to support John the Baptizer Parish in San Diego in their campaign to build a new church, and nearly $12,000 has been raised for the Solidarity Fund through the Christmas campaign. The Stewardship and Development Office also has resumed its Share Program that supports Eparchial Administration and has raised over $45,000.

Readers interested in contributing or learning more about this critically important Campaign can visit the Campaign website at esn-cc.org and click “donate.”  They can also contact Mariya Kokor at mariya.kokor@esnucc.org or Oleh Skubiak at oskubiak@icloud.com.