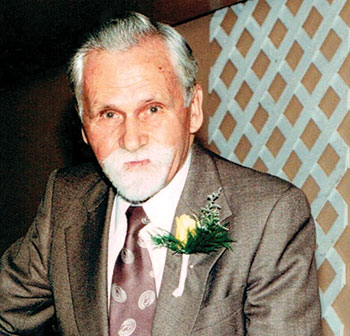 Born in the Zaporizhia Oblast of Ukraine, Mr. Horlatsch survived the Holodomor as a child. He was dedicated to educating people about the Famine-Genocide of 1932-1933. He frequently spoke publicly about his experiences and the importance of ensuring that such events as the Holodomor are never repeated.

On the 75th anniversary of the Holodomor, Mr. Horlatsch carried the International Holodomor Remembrance Flame across Canada (a joint project with the Ukrainian World Congress and the Ukrainian Canadian Congress). During this remarkable journey, he visited 17 cities and countless schools, educating schoolchildren, teachers, politicians and all Canadians about this tragic yet important part of world history.

A teacher by profession, Mr. Horlatsch was one of the founders of the Ukrainian Youth Association in Canada, former president of the Canadian Friends of Ukraine and the author of seven books. Following the re-establishment of Ukraine’s independence, Mr. Horlatsch initiated the “Walk of Freedom,” covering more than 4,500 kilometers across Ukraine.

“On behalf of the Ukrainian Canadian community, I express my sincere condolences to Mr. Horlatsch’s family and friends,” stated Paul Grod, national president of the Ukrainian Canadian Congress. “The loss of Mr. Horlatsch is a great loss for our community. Mr. Horlatsch was a Ukrainian and Canadian patriot who did so much to educate thousands of people about the Holodomor Famine-Genocide and to help the people of Ukraine build a better future. He dedicated his life to the service of our community, Ukraine’s freedom and education. Mr. Horlatsch was an inspiration to me personally, and to so many others in our community. He will be remembered for his kindness, enthusiasm, openness and willingness to dedicate his time and effort to so many important causes.”