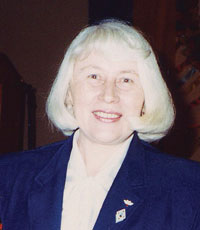 Stefaniya Shabatura in a file photo from the late 1980s

KHARKIV, Ukraine – Stefaniya Shabatura, artist, former member of the Ukrainian Helsinki Group and a former Soviet political prisoner, died on December 17 after a long illness. She was 76.

Ms. Shabatura was born on November 5, 1938, in the Ternopil region and was very young when her father was killed in World War II. She graduated from two art institutes in the 1960s, specializing in creative embroidery.

She was also an active member of the Lviv Club for Creative Young People and took part in circulating samvydav literature.

She was arrested during the second wave of arrests of the Ukrainian intelligentsia which began on January 12, 1972. She was charged under the standard Article 62 Part 1 of the Criminal Code – “anti-Soviet agitation and propaganda” and sentenced to five years’ harsh-regime labor camp and three years’ exile. The charges were linked to her circulating the poetry of Vasyl Stus and Mykola Kholodny, as well as the article “Amid the Snows” by Valentyn Moroz.

She served her sentence in women’s camp ZhKh-385/3 in a Mordovian labor camp at Barashevo. There she took an active part in protest actions and hunger strikes, demanding political prisoner status and an amnesty for all prisoners of conscience. She was punished for this by being thrown into the punishment solitary confinement or PKT (prison-type cells) and calculated that in all she had spent 115 days in solitary confinement and a year and a half in PKT.

Ms. Shabatura was not allowed to paint, which led to the women political prisoners declaring a hunger strike in protest. It was only in 1974 that an officer of the Lviv KGB brought a painter’s case and paints, pencils, brushes and paper, after which the camp administration made no more attempts to stop her.

At the end of 1975 Ms. Shabatura was taken to Lviv for “re-education.” On December 10, Human Rights Day, as in previous years, she declared a hunger strike to protest violations of human rights in the USSR. Despite intense pressure from an officer of the Lviv KGB, Ms. Shabatura did not abandon her strike. She was warned that she would “live to regret it.”

Immediately following her return to the camp, directly at the guard point, Ms. Shabatura was officially informed that 150 of her paintings, taken away before her departure, had been burned either as “abstract works” or because the camp was depicted.

To protest the action, in February 1976 she refused to work. She was initially thrown into the solitary confinement cell, then in April she was put in a prison-type cell for six months. The head of the camp cynically told her: “We don’t shoot people anymore, but we still have other ways of making sure that you don’t leave this camp alive.” Ms. Shabatura declared a hunger strike that lasted 12 days.

A wave of protests swept through the Mordovian political labor camps over the wanton destruction of her work, and that of others.

In February 1979 a group of political prisoners and those in exile, including Ms. Shabatura, declared their support for – and membership in – the Ukrainian Helsinki Group, whose founding members by that time were almost all in labor camps.

At the end of the 1980s Ms. Shabatura became actively involved in the national and political revival in Ukraine. She was an active member of the Lviv chapter of Memorial and of Rukh, the Popular Movement of Ukraine, and took part in the struggle to re-establish the persecuted Ukrainian Greek-Catholic Church.

Ms. Shabatura died on December 17 in Lviv, where she had lived for many years.