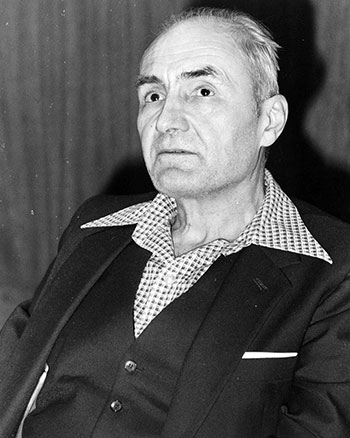 Sviatoslav Karavansky at the Ukrainian National Association in 1980.

PHILADELPHIA – Sviatoslav Karavansky, a prominent Ukrainian anti-Soviet dissident, twice imprisoned in Soviet concentration camps for a total of 31 years, died at the age of 95 on December 17 at a hospital in Baltimore. He had been living in the U.S. since 1980, soon after being released with his wife, Dr. Nina Strokata, likewise an inmate of Soviet prisons, who was arrested for protesting her husband’s incarceration.

Born December 24, 1920, in Odesa, Ukraine, Mr. Karavansky studied philology and literature at the local university at the same time as he participated in the activities of student groups linked to the Organization of Ukrainian Nationalists (OUN) underground. Arrested by the Soviet security police in 1944, he refused to become a secret informer to report on fellow students and consequently was given a 25-year sentence.

He served his prison term in various Siberian hard-labor camps. where he was subjected to 12-hour work days, laboring in mines, felling trees or building roads, enduring constant undernourishment and harsh subarctic winters – the characteristic form of torture in Soviet camps.

After being released under a post-Stalinist amnesty in 1960, Mr. Karavansky returned to Odesa, where for the next several years he scraped by, doing translations of classic world authors, writing articles on linguistic issues for newspapers and at one point working as a computer mechanic.
He became very active in efforts to revive the use of the Ukrainian language in those parts of Ukraine where schools and public life were being subjected to intense Russification.

He wrote two books aimed at guarding the Ukrainian language against government efforts to bring it closer to the Russian language (which in later years he would identify as a form of linguicide): a thesaurus and a glossary of rhymes for 60,000 Ukrainian words.

Alarmed at the pace at which Ukrainian was being pushed out of schools in Ukraine, he wrote several articles in the form of appeals to state prosecutors, with numerous references to the Soviet Constitution and Lenin’s writings, detailing and protesting the Russification that was inundating all levels of education. Mr. Karavansky’s articles were published in the underground press, the samvydav, and this led to his arrest in 1965 and the revocation, without a court trial, of his 1960 release from prison.

Even as he served his second term in the infamous Vladimir Prison, colloquially known as “Vladimirsky Central,” Mr. Karavansky continued to expose violations of human rights in the USSR. He wrote petitions dealing with the discrimination against Jews; the mass World War II deportations of entire ethnic groups, such as the Chechens and the Crimean Tatars; and the cruel punishments inflicted on participants and supporters of the Ukrainian and Baltic nations’ liberation movements. In prison he collected testimonies from witnesses to the 1940 mass execution of Polish officers in Katyn by the NKVD, which official Soviet history ascribed to the Nazis.

He succeeded in having some of those articles smuggled out of prison and published in the West. In 1970 he was made to stand trial and given an additional eight-year sentence for engaging in these activities. In 1979 Mr. Karavansky joined the Ukrainian Public Group to Promote the Implementation of the Helsinki Accords (Ukrainian Helsinki Group), of which his wife was a founding member.

In the 1970s numerous appeals were made from the West to release Mr. Karavansky and allow him and his wife to emigrate. In 1979 Soviet authorities allowed the couple to leave the Soviet Union. The Karavanskys lived in Denton, Md. The couple never ceased their activities on behalf of persecuted Ukrainian national resistance and human rights activists. Dr. Strokata died in 1998.

Mr. Karavansky devoted his time in the U.S. to writing books on linguistics, compiling various dictionaries, articles and blogs on political and social developments in Ukraine. He also published several books of poetry and essays. His final book on Stalin’s Russification of the Ukrainian language is due to come out by the end of the year. His erudite articles on Ukrainian
linguistics won him a place as a leading expert on the Ukrainian language. He was a harbinger of the resurgence of Russian neo-imperialism.

He compiled several dictionaries: the very popular “Practical Dictionary of Synonyms in the Ukrainian Language” (published in Kyiv 1993 and 2000, and in Lviv 2008 and 2012); “Russian-Ukrainian Dictionary of Words Difficult to Translate,” 1998; and the 1,000-page “Dictionary of Ukrainian Rhymes,” (which he began compiling during his incarceration).

His main work in the field of linguistics is “Secrets of the Ukrainian Language” (Kyiv, 1994; Lviv, 2009). It is considered a leading study of the unique characteristics of the Ukrainian language which the Soviet government took steps to eradicate in its efforts to draw the Ukrainian language closer to Russian. Other important works in this field were: “Ukrainian Word Search or the Struggle for the National ‘I’ ” (Kyiv, 2001); “The Idiotic Use of ‘the Stalinist Yaryzhka’ [unique letters in the Russian alphabet] in the State Language of Ukraine” (to be published posthumously); “Whence Did the Muscovite [Russian] Language Originate, or the Truth Cannot be Hidden” (Lviv, 2012).

Mr. Karavansky also took to semi-philosophical reflections on the ordeals of writers in such works as: “Through Hardships to the Stars, or I Want to be an Editor” (Lviv, 2008); “Book-Magazine of a Single Author” (Lviv, 2010); and “Letter to a Hero of the Pen – Maria Matios” (2013).