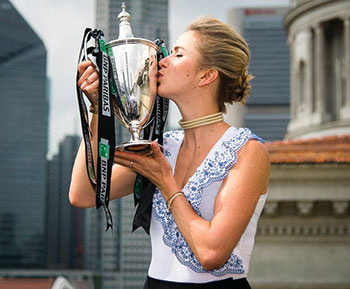 Elina Svitolina celebrates her victory at the Singapore Championship.

In the recent past, women’s tennis has seen players like Serena Williams, Petra Kvitova and Maria Sharapova cap victorious breakthrough seasons by claiming the crown at the WTA Finals. Elina Svitolina’s run to the Singapore Championship this year was a little different, almost the opposite. Her goal was to salvage what she could of a breakthrough season that had strayed way off course.

“For me, going into this tournament was very important mentally to bounce back,” Svitolina said in a post-tournament press gathering. “You know, I had a really, really tough second part of the season.”

Svitolina started strong winning three early tournaments in 2018, including a rout  of world No.1 Simona Halep of Romania in the Rome final in May. The young Ukrainian then hit a wall, mentally and physically. She proceeded to lose early in the last three majors, reaching only one semifinal overall. She watched younger players like Naomi Osaka of Japan and Aryna Sabalenka of Belarus win Grand Slams and get headlines. Svitolina’s spot in the WTA Finals was not guaranteed until late fall, with no one expecting much from her upon arrival in Singapore on October 21.

Away from the courts, Svitolina was hearing it from online critics. She suffered through some serious weight loss early in 2018, a fact which received much social media publicity. As Svitolina said in Singapore, “There’s a thousand opinions, a million opinions.”

“I stopped with my coach, Thierry, and it was not easy,” Svitolina said of her September break-up with Thierry Ascione, who helped her reach the Top 5. “With all of the things going on social media, with the opinions about my physique, it wasn’t easy.”

Many in the tennis world were chatting about Svitolina as the WTA Finals got underway. Some of them, the “haters” – Svitolina’s word – complained she had backed into the year-end championship so unconvincingly that one could almost hear her going beep-beep-beep (sound of large truck moving in reverse). While earning a large number of points on the WTA tour, she was establishing a reputation as a Grand Slam underachiever who won her place in Singapore by default when No. 1 Halep pulled out of the event at the last minute with an injury.

The Ukrainian heard the negative chatter and came in with a chip on her shoulder. Nobody could knock it off as she ran the table in Singapore with her perfect 5-0 record. “I think I have nothing to prove anymore to anyone,” she told the media after the final. “It’s definitely a good statement for myself.”

What was immediately easy to see in Singapore was that Svitolina’s mission was to put the last five months behind her. She looked stronger, her grunt was louder and she was hitting the ball with confidence and purpose for the first time since May. She was competing with a sense of single-mindedness. Her body language hinted at desperation and her results showed it.

She started the week with her first win over Petra Kvitova of the Czech Republic after seven consecutive losses. She followed with only her third victory in eight matches against Karolina Pliskova of the Czech Republic. She next toppled defending champ Caroline Wozniacki of Denmark in a tense win-or-go-home shootout. She edged out Kiki Bertens of the Netherlands in a three-set slugfest semifinal match. Svitolina went on to close out the tournament with a patient, most convincing comeback triumph, 3-6, 6-2, 6-2 over Sloan Stephens of the U.S.A. to earn the biggest title of her career.

The finals contest showed Svitolina’s emotion, her stoic stubbornness, her fervent desire to redeem her season. She was more than willing to do the difficult baseline work necessary to break down Stephens. It took several dozen grueling, entertaining rallies before Stephens finally succumbed to Svitolina’s superior desire.

For Stephens, the Singapore final unfolded exactly like her French Open final against Halep. Stephens’ combination of consistency and weight of shot was impossible for her opponents to hit through early play. In both matches Stephens claimed the first set with ease before allowing her nerves to slow her momentum midway through the second set. In both cases with Stephens’ hesitation, her opponent dug in her heels.

Like Halep in Paris, Svitolina stopped trying to hit the ball past Stephens, instead hitting it directly at her. In this way Svitolina eliminated one of her opponent’s strengths – her ability to defend and counter-attack on the run. It turned out Stephens is not as comfortable or as effective hitting from a stationary position, allowing Svitolina to grow more comfortable working the rallies in the last two sets.

“It’s amazing, I’m very, very pleased with my performance this week,” Svitolina admitted at her post-tournament press conference. “There were definitely nerves, but I was just trying to fight for every ball, and I think that’s what made the difference in the end. I refused to give away free points.”

The victory made Svitolina the eighth player to go undefeated in winning the season-ending title, which features a three-match round-robin format at the outset. She was the first to go undefeated since Serena Williams in 2013.

She has now won 13 of 15 finals she’s played in her career, including the last nine, with her last final loss coming in 2016 to Kvitova at the Zhuhai tournament.

Whatever happens to Svitolina next year, she has definitively shown she can bounce back from major adversity and use it as motivational fuel. Over the course of one brilliant, whirlwind week, she made 2018 the breakthrough season it was supposed to be all along. She now is full of confidence as she seeks to make a Grand Slam breakthrough in 2019 along with a potential rise up the world rankings to No. 1.

Ihor Stelmach may be reached at iman@sfgsports.com