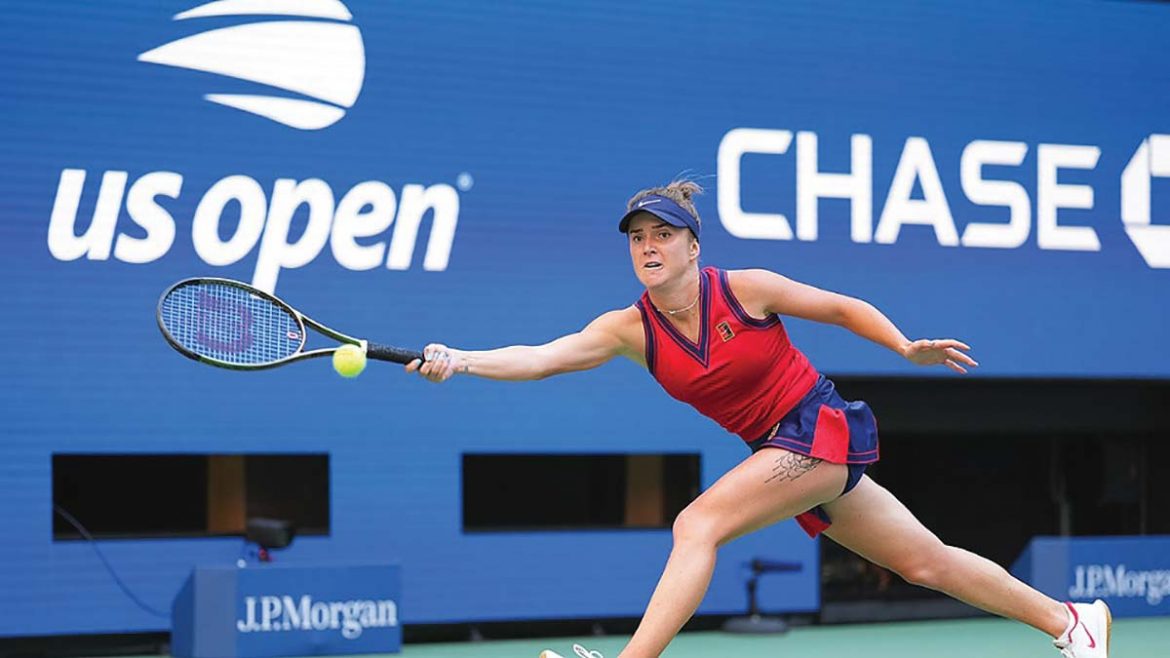 Elina Svitolina reaches to return the ball during her quarterfinal match at the U.S. Open against Leyla Fernandez of Canada.

Her positive momentum was ignited in Tokyo when Elina Svitolina (ranked fourth by the WTA as of September 13 with 4,860 points) won the bronze medal in women’s tennis at the 2020 Olympics. A late decision to accept a wild-card entrance to the Chicago Open as a tune-up to the U.S. Open (held on August 30-September 12 in Flushing, N.Y.) proved most fortuitous as she won that tournament.

The charge continued through the first four rounds of the U.S. Open when Svitolina dispatched Rebecca Marino of Canada (6-2, 6-3), Rebeka Masarova of Spain (6-2, 7-5), Daria Kasatkina of Russia (6-4, 6-2) and Simona Halep of Romania (6-3, 6-3). She had help along the way when top-seeded Ashleigh Barty of Australia and No. 3 seed Naomi Osaka of Japan both lost in third round play, potentially opening up the remaining draw for Svitolina to make the final and win her first Grand Slam event.

Her quarterfinal opponent was 19-year-old Canadian Leyla Fernandez (ranked 73rd), who had inadvertently assisted her opponent when she defeated past U.S. Open champions and former No. 1’s Angelique Kerber (of Germany) and Osaka. Fernandez was the talk of the tournament on the women’s side, a potential new star on the tennis horizon. In a hard-fought 68-minute captivating match, the upstart Fernandez ousted Svitolina 6-3, 3-6, 7-6 to earn a berth in the semifinal.

Fernandez showed a veteran-like ability to reset at crucial moments, most evident after failing to capitalize on a 5-2 final set lead. Svitolina closed to five-all and battled to deuce in Fernandez’ five-all service game. But the young Canadian won a pivotal 23-ball rally, escaping with a big serve.

In the tiebreaker, Fernandez saw a 4-1 lead vanish, then won a 19-ball rally to pull ahead once more. The moment of the match came at five-all, when her on-the-run forehand pass clipped the net and bounded down the line, past a stranded Svitolina. Another big serve ended it, sending the youngster to the ground in celebration with another hard-earned upset victory.

For Svitolina, this was another bitter loss for a player still looking to reach her first Grand Slam final, falling to 2-6 in quarterfinal matches at the four major tournaments in her career. However, the Ukrainian has still enjoyed a scintillating summer to remember, from winning the bronze medal at the Tokyo Olympics to capturing the title in the U.S. Open lead-up event in Chicago to, on a personal note, tying the knot with Gael Monfils in July.

Other U.S. Open News: After being eliminated in first-round singles action, Dayana Yastremska teamed up with Marta Kostyuk to make the round of 16 in doubles. The Ukrainian tandem beat Emma Navarro/Hailey Baptiste (U.S.A.) 3-6, 6-1, 6-3 and Aleksandra Krunic/Nina Stojanovic (Serbia) 6-4, 4-6, 6-4 before losing to the duo of Gabriela Dabrowski/Luisa Stefani (Canada/Brazil) 7-6 (5), 4-6, 2-6. In other doubles play, Nadiia Kichenok and partner Raluca Olaru of Romania made it into the third round, sharing $34,000 in prize money. Along with Yastremska (ranked 53rd by the WTA) and Kostyuk (56th), Anhelina Kalinina (64th) and Nadia Podoroska of Argentina (39th; she is of Ukrainian descent) did not make it beyond the first round of women’s singles action at the U.S. Open.