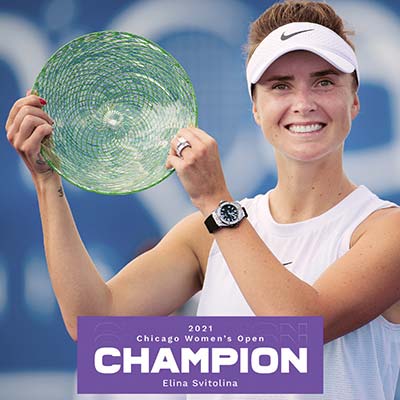 Olympic bronze medalist Elina Svitolina continued her U.S. Open build up by reaching and winning her first final of 2021 at the hardcourt Chicago Women’s Open on August 28. The No. 1 seed’s decision to accept a last-minute wild card paid off with her successful run to her 19th career final and 16th career singles title. She had not reached a final since her title run in Strasbourg last September. Since earning her bronze at the Tokyo Games, Svitolina lost her opening matches in both Montreal and Cincinnati.

Svitolina converted all six break points while notching her first victory of the year. The match lasted a lengthy two hours and two minutes. Svitolina led 3-0 in the second set before Cornet made a run and pulled to within 5-4. However, Cornet was unable to hold serve and Svitolina closed out the match with a backhand winner down the baseline.

The ninth-seeded Cornet struggled with a groin injury, taking a medical timeout after losing the initial set, returning with her thigh wrapped. It was reported that Svitolina was also suffering with an undisclosed illness.

In the semifinal against the unseeded Peterson, Svitolina hit 29 winners, including seven aces. In her title match she pulled off a 100 percent break conversion (six of six) in defeating Cornet.

While in Chicago, Svitolina celebrated Ukraine’s 30th anniversary of independence with an Instagram post proclaiming “We Ukrainians are winners. We are strong in spirit, purposeful; we honor and respect our culture, traditions and history. We celebrate this day together today.”

Svitolina took time to visit the Ukrainian Village and sample a bowl of borshch. She reportedly boasted that “borsch runs in my veins” while enjoying the beet soup at a café near the Ukrainian National Museum in Chicago.

A Kichenok was guaranteed to be a winner in this match! In the doubles final at the Chicago Women’s Open, the tandem of Nadiia Kichenok-Raluca Olaru (Romania) defeated the duo of Lyudmyla Kichenok-Makoto Ninomiya (Japan) 7-6(6), 5-7, 10-8 in a long, hard-fought battle. In earlier play, Kichenok/Olaru bested Viktoriia Golubic/Tamara Zidansek (Switzerland/Slovenia) 6-2, 6-4, Yu-Chieh Hsieh/Peangtarn Plipuech (Taiwan/Thailand) 7-6(1), 6-3 and Tereza Martincova/Marketa Vondrousova (Czech Republic) in a walkover.