Symposium participants gather for a group photo at the conclusion of the event on April 17.

PHILADELPHIA – Year 2021 marks the 20th anniversary of Pope John Paul II’s historic visit to Ukraine. To commemorate the event, a symposium titled “St. John Paul II and Ukrainians” was held on April 17 in Philadelphia. The event was organized by the St. Sophia Religious Association of Ukrainian Catholics, Inc., the Basilian Spirituality Center and Sisters of St. Basil the Great, in cooperation with the Ukrainian Selfreliance Federal Credit Union. Students of the Ukrainian Heritage School participated in the event via Zoom. 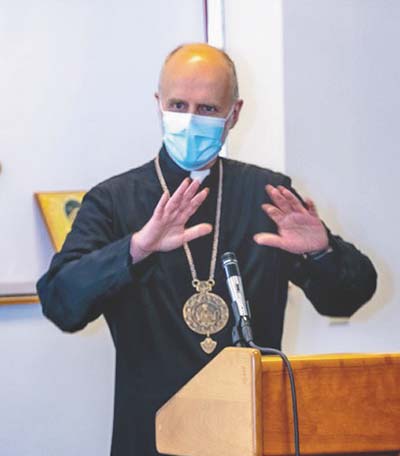 Most Rev. Borys Gudziak, metropolitan-archbishop of Philadelphia and metropolitan for the Ukrainian Catholic Church in the U.S.A.

The opening prayer was conducted by Most Rev. Borys Gudziak, metropolitan-archbishop of Philadelphia and metropolitan for the Ukrainian Catholic Church in the U.S.A., who also offered personal remarks on St. John Paul II’s visit in June 2001.

“It changed Ukrainian history,” Archbishop Gudziak said.  “It contributed to the spirit that emerged during the Orange Revolution in 2004 and Revolution of Dignity in 2013-2014. It was prophetic, and its fruits are still coming forth.”

In his talk during the symposium, “The Popes and the UGCC in America 1884-2001,” Rev. Dr. Ivan Kaszczak stated that the popes have always been a voice for the voiceless.  Specifically, they have helped the Ukrainian Catholic Church establish itself in the United States of America. From Pope Leo XIII until Pope St. John Paul II, there have been examples of the papacy using its influence to speak for the Eastern Catholic Churches in the U.S.

Although this influence was not always timely or even sufficient – it was there, the Rev. Kaszczak said. The Ukrainian Catholic Church in Ukraine took notice of the power of the papacy and would suggest certain structural changes for the United States. These suggestions came as early as 1903 and were addressed to Pope Leo XIII. The papacy defended the rights of Eastern Catholics in the United States when they had few other advocates. This influence was acknowledged by the Ukrainian Catholic Church in both Ukraine and the United States. 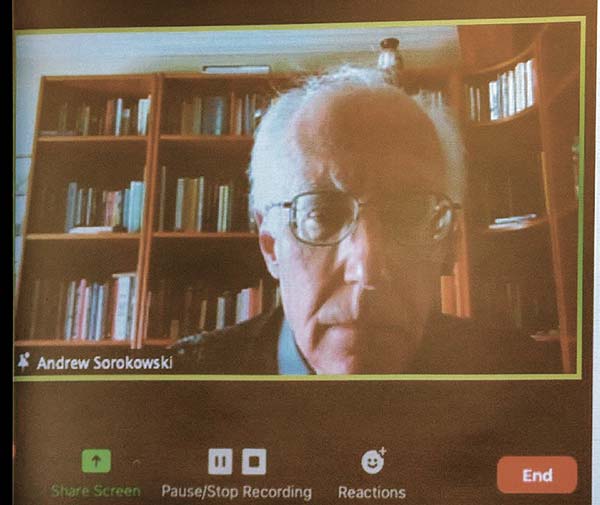 In assessing the potential impact on Ukraine of Pope St. John Paul II’s thinking, Dr. Andrew Sorokowski explored how the pontific deals in his encyclicals and other writings with three binaries (that is, dualities or dichotomies) in the areas of philosophy, socio-economic teaching and ecumenism. These writings are generally known in Ukraine.

First, John Paul demonstrates that the supposed philosophical contradiction between faith and reason is false, Mr. Sorokowski said. This has important implications for any post-Marxist society like Ukraine, as well as for today’s world in general. Second, he shows that the socio-economic opposition between communism and contemporary capitalism is best regarded from the standpoint of Catholic social teaching, which charts an alternative course. Such a course offers guidance for the development of Ukraine’s oligarchic-capitalist economy in a more humane and equitable direction. Finally, in his writings John Paul approaches the cultural aspect of the East-West church binary by affirming the value of both Eastern and Western ecclesial traditions, while he resolves the ecclesiological aspect by way of his ecumenical vision. This vision is especially applicable to contemporary Ukraine, with her ecumenically minded Orthodox and Catholic leaders. In all three areas, Pope St. John Paul II’s thinking calls for Christian humanism and a civilization of love, Mr. Sorokowski said. 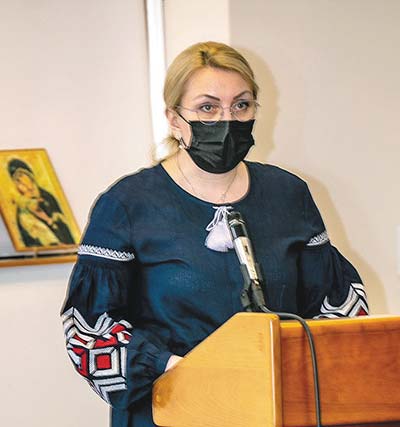 Dr. Iryna Ivankovych drew parallels between John Paul II and Patriarch Josyf Slipyj. To name a few: profound faith in God; charisma; polyglotism; missionary spirit; ecumenism; fight for national independence and religious freedom; courage. Both John Paul II and Josyf Slipyj were targets of the KGB. Cardinal Slipyj spent 18 years in Gulag camps (1945-1963); Karol Wojtyła was under surveillance of the Polish Secret Service since 1953. Last but not least, the two were connected by the bestselling novel “The Shoes of the Fisherman” by the Australian writer Morris West published in 1963. 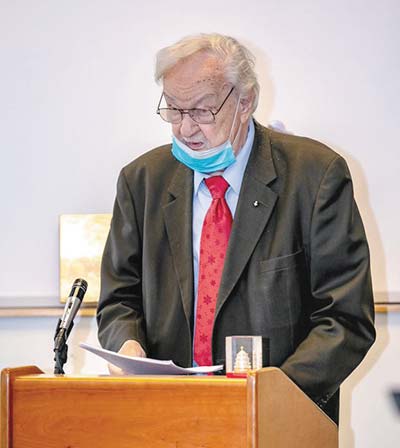 Although erroneously, contemporary journalists search for a prophecy of electing Cardinal Karol Wojtyła as pope in West’s novel, Ms. Ivankovych said. Letters and communication between John Paul II and Josyf Slipyj were vibrant and multifaceted. They wrote to one another in Polish, Ukrainian, Italian or Latin. The common Slavic roots were a reason for pride of both hierarchs. John Paul II failed to recognize the patriarchate of the UGCC. He also appointed as Slipyj’s successor Myroslav Ivan Lubachivsky, not Lubomyr Husar who was proposed by Cardinal Slipyj. One can only suspect that this decision was heavily influenced by the Vatican nomenclature and its Ostpolitik, Ms. Ivankovych said. Yet, the most significant expression of John Paul II’s friendly predisposition towards Josyf Slipyj as his Slavic brother can be found in Patriarch Slipyj’s funeral services. Pope John Paul II died on April 2, 2005. He was beatified on May 1, 2011, and canonized on April 27, 2014. The heroic virtues of the prisoner of the Soviet camps, Servant of God, Patriarch of the Underground Church Josyf Slipyj, as well as the virtues of his predecessor Venerable Metropolitan Andrey Sheptytsky have not yet been properly recognized by the Vatican, Ms. Ivankovych said. 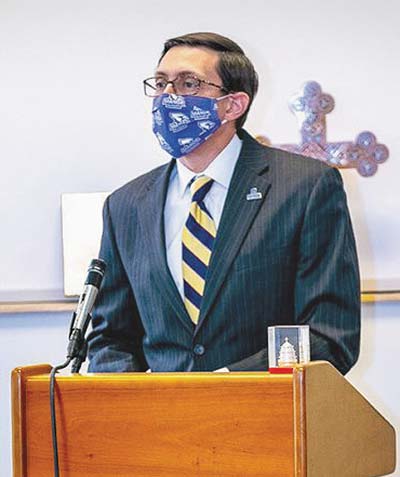 “My brief encounters with the Holy Father left me with a great sense of satisfaction,” Prof. Rudnytzky said.  “At that time, of course, I did not suspect that I had been speaking with a future saint; but, as I recall, I savored the pleasant, rewarding experience of having talked with an erudite man, whose thoughts were both intellectually stimulating and spiritually uplifting. There was no doubt in my mind that I was in the presence of a man of God, who had successfully integrated faith with reason, experience with aspiration, and who stood on firm philosophical ground while at the same time conscious of his limitations as a human being,” Prof. Rudnytzky said.

The panel discussion was moderated by Dr. Jonathan Peri, president of Manor College. Bishop Andriy Rabiy closed the event with a prayer.