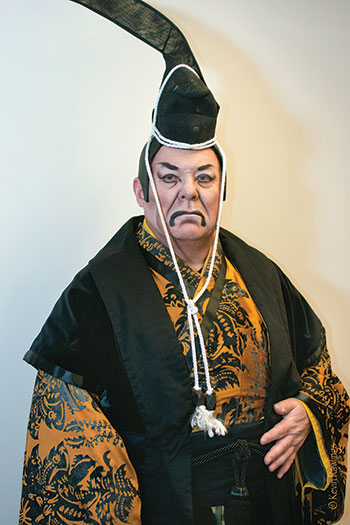 Stefan Szkafarowsky as the Bonze in “Madame Butterfly.”

NEW YORK – Stefan Szkafarowsky, known for his beautiful bass voice and his impeccable vocal technique, returns to the Metropolitan Opera House in New York this season to portray the role of the Bonze in the opera “Madame Butterfly” on February 22 and 26 as well as March 3, 8, 13 and 16.

“Madame Butterfly,” is one of the world’s best loved operas in three acts by composer Giacomo Puccini and librettists Luigi Illica and Giuseppe Giacosa. The setting is Nagasaki, Japan, in the early 1900s. The opera is centered upon a love affair between an American and a Japanese girl, and is notable for exotic period stage settings.

Mr. Szkafarowsky has sung not only at the Met, but at many well-known opera houses in the United States and abroad, including such venues as the LA Opera, Virginia Opera, Seattle Opera, Dallas, Opera, Lyric Opera of Chicago, Opera Colorado, Florida Grand Opera, Sao Paulo Opera in Brazil, Teatro Lirico in Cagliari, Italy, Savonlinna Music Festival in Finland and the Lviv Opera in Ukraine.

The main bass roles that he has performed have been from world-renowned operas such as “Aida,” “Macbeth,” “Nabucco,” “Don Carlos,” “The Marriage of Figaro,” “The Barber of Seville,” “Eugene Onegin,” “Rusalka,” “Boris Godunov,” “The Magic Flute,” “Rigoletto,” “Il Trovatore,” “La Boheme,” “Lucia di Lammermoor” and “Aleko.”

Mr. Szkafarowsky has had the great honor to share the stage with wonderful artists as Placido Domingo, Luciano Pavarotti, Paul Plishka, Sherill Milnes, Maria Ciara, Piero Cappuccilli and many of today’s fantastic artists.