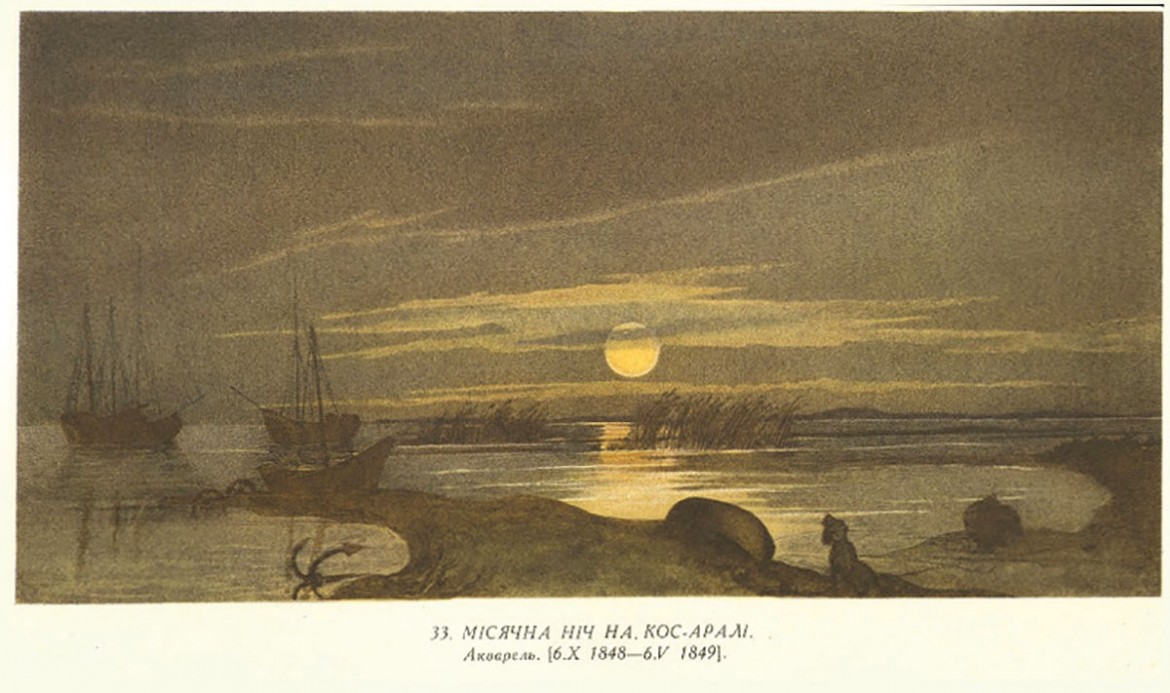 Reproduction of Taras Shevchenko’s watercolor of a moonlit night on Kos-Aral (1848-1849).

We’re all familiar with Charles Darwin’s ’round-the-world voyage of the Beagle in 1831-1836 and his role as naturalist on that voyage. That voyage helped to shape his concept of natural selection as the basis of evolution. There were also two topographical artists on the Beagle, and their watercolors are similar to those of Taras Shevchenko’s remarkable collection of sketches of the Aral and Caspian seas.

Not until the 18th century were artists commissioned to accompany naval exploratory expeditions. Capt. James Cook revolutionized the notion of exploration by including scientists and artists who advanced public understanding of the planet’s geography, anthropology, and fauna and flora. Cook’s three voyages in the Pacific Ocean (1768-1779) marked the emergence of the artist-naturalist-explorer. It became fashionable, during the expansion of the tsarist empire of the 19th century, to undertake similar scientific expeditions, looking to map the territories for trade routes and search for minerals.

For a portion of Shevchenko’s decade of exile at Russian military outposts on the Aral and Caspian seas, he was assigned to a series of exploratory hydrographic and geologic expeditions. Though he was a common soldier for most of the time in exile, his treatment and the conditions he worked under were no harsher than those of the scientists and topographers who accompanied these expeditions. Often, he enjoyed privileges of sharing the compounds and meals with the commanders and scientists, and was accepted as an intellectual peer by people who greatly respected his talents.

Shevchenko was arrested in Kyiv on April 6, 1847, for his satirical poetry that was considered insulting to Tsar Nicholas, as well as his political ideas, and his association with the Brotherhood of Ss. Cyril and Methodius. This was a pan-Slavist political society dedicated to the political liberalization of the Russian Empire, with the aim of transforming it into a confederation of Slavic nations.

Mykola Kostomarov, a member of the brotherhood, was present in Kyiv when Shevchenko was escorted by two gendarmes to a wagon and then transported to St. Petersburg to stand trial. There, he was condemned to military service for life without promotion and expressly prohibited from any further writing or drawing.

From June 22, 1847, to May 11, 1848, the fortress of Orsk was Shevchenko’s home, 2,500km (1560 mi) to the southeast of St. Petersburg, at the edge of the arid steppes of central Asia. Orsk was a military exchange post and Russian customs center that dealt with traders from Central Asia. There, in his first year, Shevchenko was treated harshly, as a common soldier, with no privileges.

By a stroke of good fortune, Lt. Alexey Butakov (later to become an admiral) was organizing an expedition from Orsk to explore the Aral Sea. Butakov and his detachment of sailors, scientists and topographers arrived at the Orsk Fortress on March 5, 1848, and started building a flat-bottomed schooner (Konstantin) that was to be their survey vessel.

The work was completed on April 28, and then disassembled for transport by wagon, for there were no forests or timber on the arid plains of the Aral Sea. During that time, he became acquainted with Shevchenko and requested Gen. Obruchov, the governor-general of the Orenburg military District, to allow Shevchenko to accompany his expedition as an illustrator of landscapes and shorelines.

On May 11, 1848, a caravan of 3,000 camels, 800 horses and 1,500 carriages left Orsk, transporting the disassembled schooner and all necessary supplies. The caravan consisted of some 200 infantry, 600 Bashkir horsemen, and a detachment of cavalry, all under the command of Gen. Schreiber. Shevchenko was treated as a regular member of the expedition and was not required to wear a uniform.

After a long and very difficult trip of nearly 670 kilometers (420 miles) through the Karakum Desert, the convoy reached the newly founded (1847) fortification of Raimsk (later renamed Aralsk) at the mouth of Syr Darya River, which flowed into the northern part of the Aral Sea.

During the long 39-day march through the desert (approximately 10 miles per day), Alexey Maksheev, a geographer and member of the expedition, wrote that Shevchenko walked the entire distance in civilian garb, through the searing summer desert heat, which typically would reach 120 degrees Farenheit. During the long trip, Maksheyev offered Shevchenko his meager accommodations on his wagon during rest periods and at night, which Shevchenko gratefully accepted. They arrived on June 20 at the primitive Raimsk garrison.

After reassembling the schooner Konstantine, the crew of 27 boarded the boat and sailed south on July 25, 1848, to explore the eastern shoreline of the Aral Sea. The Kazakh name “Aral-Tenghizi” roughly translates as “Sea of Islands,” referring to over 1,100 islands that once dotted its waters.

Like Shevchenko, there were several other educated Polish political exiles on the expedition, including Tomas Verner, a naturalist and botanist. Orsk and Orenburg’s military garrisons were populated by numerous exiled political prisoners from Poland and other parts of the Russian Empire who were caught up in the revolutions of 1848 that swept through Europe and the Russian Empire. Shevchenko found a kinship with many of these exiles, some of whom were also artists, poets and writers.

Despite the extreme hardships encountered during the expedition, this was a particularly productive period for Shevchenko’s poetry and art. The expedition had to overwinter on the island of Kos-Aral (October 6, 1848-April 2, 1849), where a garrison was hastily built. During the harsh winter, Shevchenko shared a small hut with Lt. Butakov and the expedition’s doctor, O. Istomin, who also served as a botanist. “Kosaral” was the title of Shevchenko’s collection of over 70 poems from that period, along with over 200 watercolors and pencil sketches.

The following expedition season began May 5 and ended September 22, 1849. They mapped the rest of the Aral Sea shoreline and discovered many more islands, one of which was named Vozrozhdeniye (Resurrection). That island later became infamous for Soviet-era biological weapons tests of anthrax, bubonic plague and other virus strains that could become weaponized.

Conditions were deplorable aboard the schooner, and during the winter camp – bad food, little fresh water (the Aral Sea is saline) and countless storms impeded their work. Many crew members became sick, including Shevchenko, who suffered from scurvy.

On October 10, 1849, Shevchenko and Lt. Butakov’s party again crossed the Karakum desert on their way back to Orenburg, a journey of 1,000 kilometers (600 miles). Butakov wanted to complete his report and brought Shevchenko back with him to arrange his sketches to complement the scientific report. Shevchenko stayed at Butakov’s quarters while he was working on the report.

Gen. Perovsky, a commander of the Orenburg military province, was impressed with Shevchenko’s work and sent a positive report to St. Petersburg, hoping to obtain some reduction in Shevchenko’s punishment and alleviate his conditions. This gesture turned out to be a disaster for Shevchenko.

The response was quick and severe. Both Gen. Perovsky and Lt. Butakov received sharp reprimands. On May 5, 1850, Governor-General Obruchov, the same one who allowed Shevchenko to accompany the Aral Sea expedition, had him arrested, tried again and imprisoned. He was sent to one of the worst penal colonies for political prisoners, the remote fortress of Novopetrovsk on the eastern coast of the Caspian Sea, where he arrived on October 8, 1850.

In his diary, Shevchenko wrote of his experience as part of the Aral expedition, noting that it was “a prison without doors.” In Novopetrovsk, he was once again consigned to be an ordinary soldier, living with his unwashed and uncouth soldier comrades. Nevertheless, again, he was treated favorably by the commandant, Col. Mayevsky. Shevchenko taught his two children, and was a frequent dinner guest of the commandant and his family.

The following year, in May 1851, Shevchenko was again assigned to a scientific expedition as an illustrator. The goal of this expedition was primarily a geologic survey of the southeastern part of the Caspian plains in search of coal deposits that were needed to power the growing fleet of steam-powered naval vessels on the Caspian Sea.

In 1851, two newly built steamers arrived at Novopetrovsk from Sweden, again by caravan from Orenburg. At the time, coal had to be transported 1,000 kilometrs from the Donbas region.

This time, Shevchenko’s companions were even more illustrious scientists, including Karl Ernst von Baer, a Baltic-German naturalist who was a member of the Russian Academy of Sciences and was increasingly influential in the exploration of the new Russian territories, specializing in lakes and fisheries. Shevchenko also befriended a Polish historian and artist, Bronislav Zalewski, who was exiled for his political activities during the revolutions of 1848.

The expedition to Karatauz lasted from May 28 through September 7, 1851. Alexander Antipov, a mining engineer, headed the expeditionary force. This was to be Shevchenko’s last foray into the countryside. There are coal deposits in northern Iran, bordering the Caspian Sea, but not in modern Turkmenistan, where Antipov’s expedition focused.

Numerous other scientific expeditions passed through Novopetrovsk during Shevchenko’s remaining six years of exile, and many of the scientists befriended Shevchenko and later spoke out on his behalf, writing letters to ministries and the tsar to release Shevchenko. Many wrote very fondly about their meetings with Shevchenko in their memoirs. One of his strongest proponents was Academician von Baer.

Finally, after 10 years of exile, Shevchenko was released and set out on his long, leisurely journey back to St. Petersburg in September 1857, stopping along the way in Astrakhan, then taking a steamer up the Volga to Nizhniy Novgorod, where he stayed the winter with friends.

He left on March 8, 1858 for Vladimir, where he stayed two weeks with now Commander Butakov and his wife Olha, who was an artist herself. He gave her his copy of the “Kobzar.” On March 27, Shevchenko boarded a train to St. Petersburg and was greeted by Countess Tolstoy and Hulak-Artemovsky, and countless friends with whom he corresponded during his exile and who supported his release.

Shevchenko spent most of 1859 traveling about Ukraine – visiting friends in Pereyaslav, Kaniv, Korsun, his home in Kyrylivka, where he was born and where his brother Mykola now lived with his family, and finally on to Kyiv. He returned to St. Petersburg in late 1859.

In February 1861, Shevchenko fell very ill, while awaiting the proclamation of Tsar Alexander II’s Emancipation Manifesto of March 3, 1861. During that period, many friends visited him daily. Fortunately, Shevchenko lived long enough to see the emancipation of serfdom, dying on March 11, 1861.

Pantaleimon Kulish, who was arrested with Shevchenko in 1847, and was exiled for his role in the Ss. Cyril and Methodius Brotherhood, gave the eulogy at Shevchenko’s bier: “…it is because of him that we have gained a great and important right: to proclaim our love for our dear and distant land in our own Ukrainian language. Ukraine had many great leaders and lawmakers, but you surpassed them all, and your family is the largest of all.” 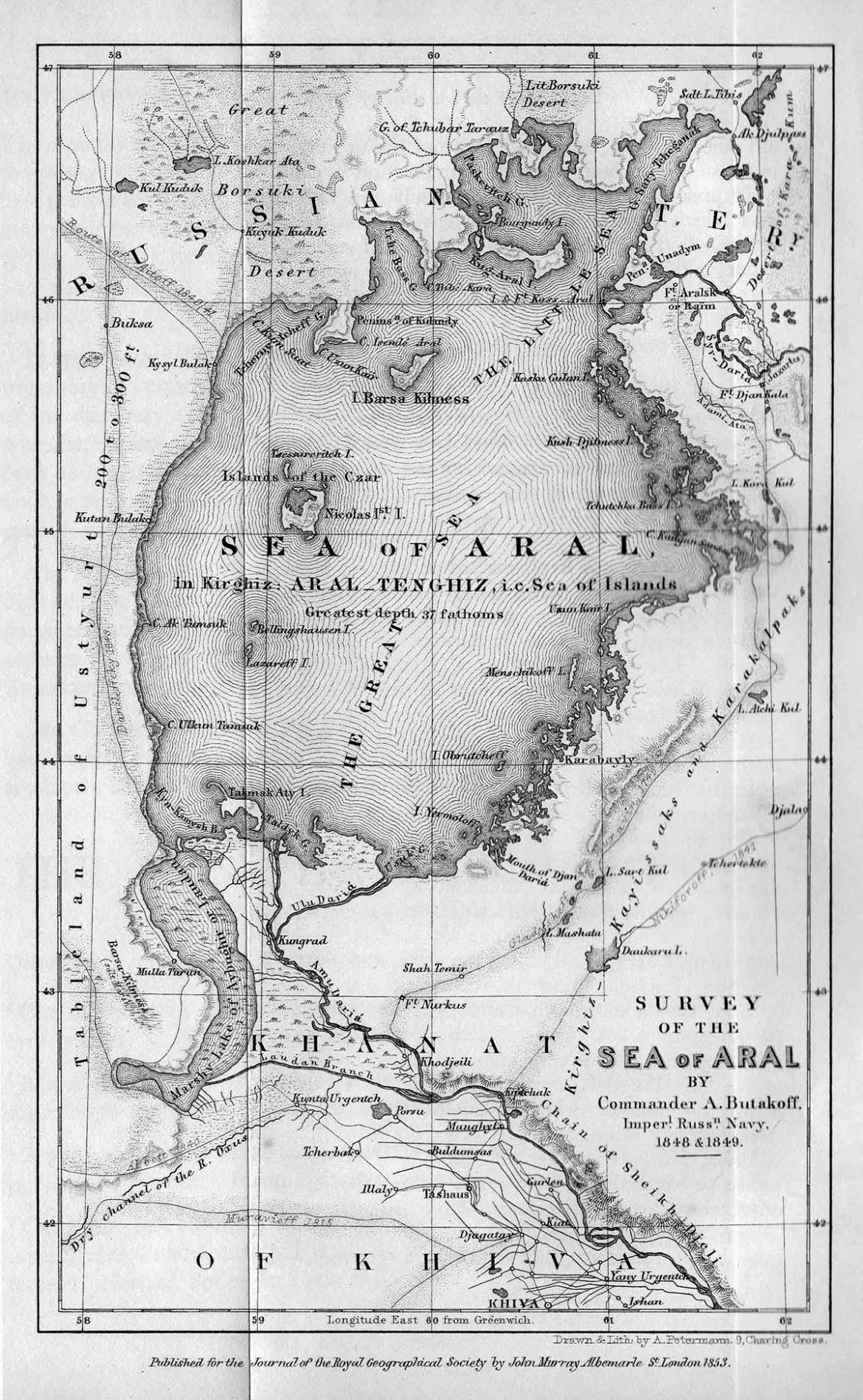 Commander Butakov’s map of the Aral Sea from 1849.