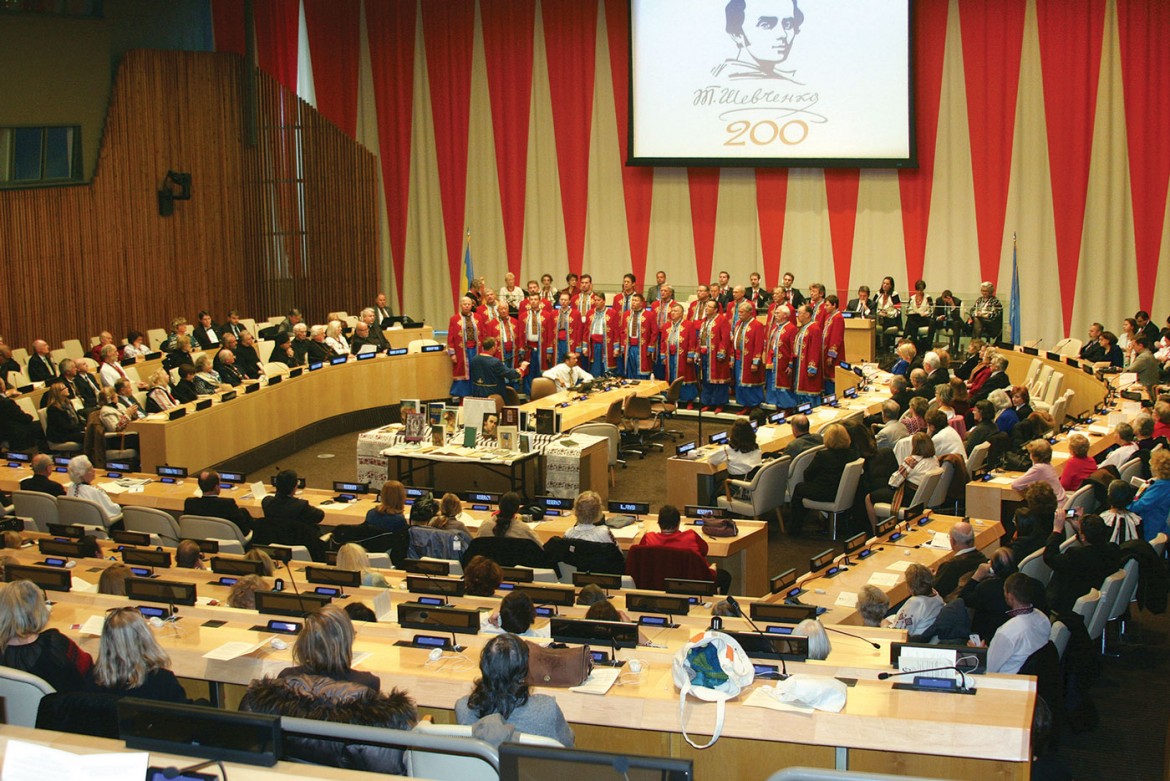 The Prometheus Chorus performs during the Taras Shevchenko program at the United Nations on March 27.

While Lenin statues were crashing down all over Ukraine in 2014, huge murals were being erected on multi-storied apartment buildings in Kyiv, Kharkiv and other major cities, decorated with images of the archetypal symbol for all Ukrainians, their own Homeric poet who sang epics about their heroic past and illuminated the way to a future of freedom and equality – Taras Shevchenko (1814-1861).

Facing the Russian military juggernaut, Ukrainians stood united behind one solitary man who was born into bondage and servitude, who was persecuted by the Russian tsarist regime for his political and humanistic views, and who was imprisoned and sent into brutal exile in Central Asia. The Soviets had always realized what a dangerous rallying point Shevchenko was for the Ukrainian spirit and attempted to delete or downplay every strong Ukrainian nationalist expression in his verses.

Shevchenko’s writings formed the foundation for modern Ukrainian literature, and he is considered the founder of the modern written Ukrainian language. His influence on culture and national consciousness is still felt to this day. Well regarded as a pictorial artist in his time, Shevchenko also pioneered the art of etching in the Russian Empire, and in 1860 was awarded the title of academician in the Imperial Academy of Arts – specifically for his achievements in etching.

In 2014, Ukraine’s beloved bard was now a rallying point for the nation, not only with his inspirational verses, but also as a visual icon repeatedly seen everywhere throughout Ukraine – from countless memorials to billboards and street art on war-torn walls to Internet memes showing Shevchenko as a modernized defender of all Ukrainians.

2014 also marked the 200th anniversary of Shevchenko’s birth and was greeted with celebrations and commemorations wherever Ukrainians lived throughout the world. The Ukrainian Congress Committee of America and the Ukrainian Canadian Congress issued statements urging their communities, “particularly our youth, to be involved in events remembering Shevchenko.” In addition to all major cities, throughout 2014 Shevchenko was also honored at numerous local concerts held in areas like Syracuse, N.Y., Toms River, N.J., and Hartford, Conn.

Of special interest was the honoring of the bard by the students of the public Shevchenko School in Vita, Manitoba, 60 miles south of Winnipeg. This school features a bust of Shevchenko in the foyer and until 1991 had offered Ukrainian language as an option at the elementary and secondary levels. Vita is a small community settled by Ukrainian immigrants in the 1890s. This area is composed of fourth- and fifth-generation Ukrainian Canadians, who have not forgotten their roots. In the Canadian students’ words, “Shevchenko’s legacy lives on.”

Literally just a few hours after the United Nations General Assembly passed a resolution condemning Russia’s invasion and bogus “referendum” in Crimea, the bicentennial of Shevchenko’s birth was celebrated in the 500-seat ECOSOC Chamber of the U.N. on March 27. The horrific bloodshed of the Maidan had caused a postponement of this tribute from its original date one month earlier. Broadcast live over the Internet, the March event featured a speech by Orysia Sushko, president of the World Federation of Ukrainian Women’s Organizations, detailing the significance of Shevchenko’s advocacy for human dignity in the light of recent events and the poet’s “core values that are at the very center of the United Nations Charter.”

Master of ceremonies Peter Fedynsky led the tribute, which featured addresses by U.N. Ambassador Noel Sinclair and Andrii Deshchytsia, Ukraine’s acting minister of foreign affairs. The program included selections sung by the Prometheus Male Chorus of Philadelphia and readings from Shevchenko’s poetry in Ukrainian and English. Tamara Olexy, president of the UCCA, stressed that “today’s modern, independent Ukraine could not have happened without Shevchenko’s poetry.” Dr. Maxim Tarnawsky from the University of Toronto explained the commitment to the Ukrainian language that Shevchenko demonstrated throughout his life. 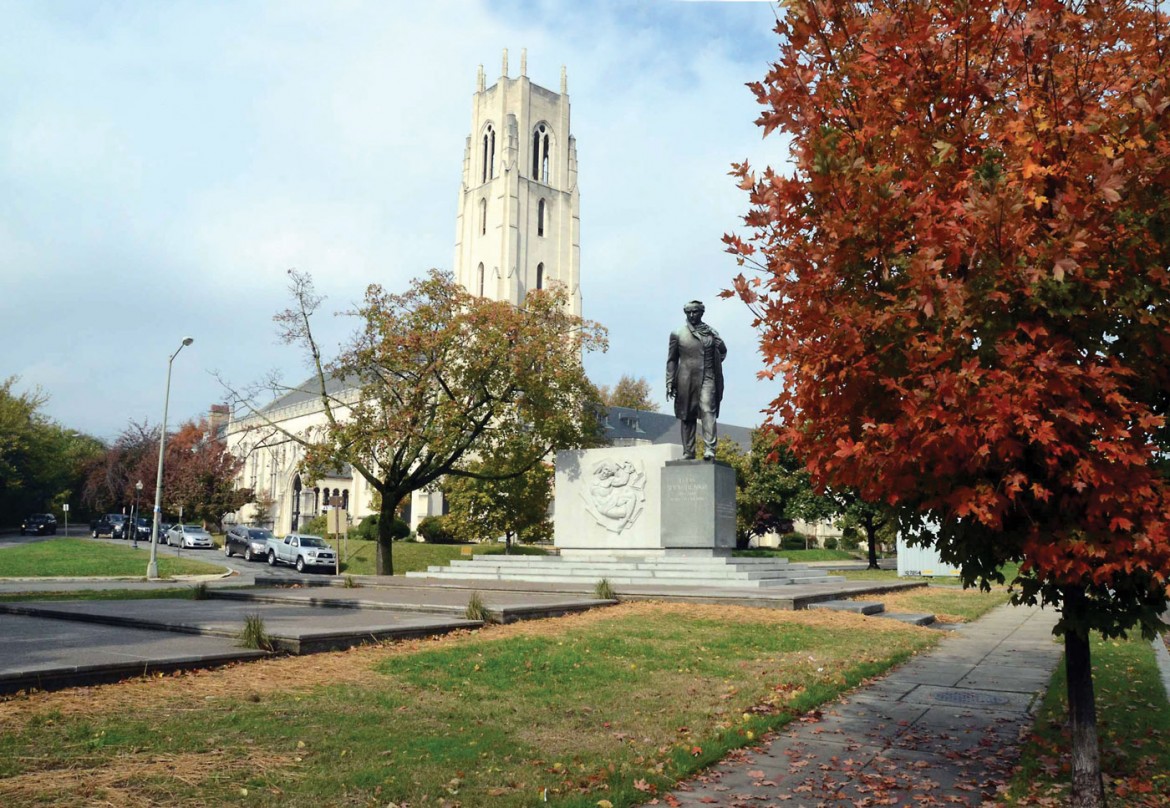 In November, after four months of repairs, the National Park Service contractor finished restoring the foundation and replacing the old crumbling concrete pavers in front of the Taras Shevchenko monument in Washington. The 50th anniversary of its unveiling was marked on June 28.

At The Ukrainian Museum in New York, the exhibition “Taras Shevchenko: Poet, Artist, Icon” offered a rare opportunity to see many treasures created by the artist and poet. The exhibition included original artworks by Shevchenko and archival objects from Ukraine seen in this country for the first time ever. Exact replicas of a selection of literary and art works complemented the originals. Opening on June 29, the exhibition included selections from the National Museum of Taras Shevchenko in Kyiv with 50 original watercolors, drawings and etchings and more than 60 other reproductions. A rare 1840 edition of the “Kobzar” on loan from the Shevchenko Scientific Society was also on display.

On March 28 at the Embassy of Ukraine in Washington, Peter Fedynsky presented the recently published volume of his translations of Shevchenko’s poems: “The Complete Kobzar: The Poetry of Taras Shevchenko.” Mr. Fedynsky read selections from his book, as well as discussed the poet’s life, his works and influence on the subsequent development of Ukraine’s identity, culture and history. The evening also included an appearance by Crimean Tatar leader Mustafa Dzhemilev, who shared his views on Russia’s takeover of Crimea and offered a historical perspective.

One hundred and fifty entertainers from seven of Saskatoon’s Ukrainian performing groups combined forces in a grand concert honoring Shevchenko that drew an audience from as far away as Vancouver and Winnipeg. The masters of ceremonies were Sonia Kodak and local CTV television personality Michael Ciona. Groups included the Lastiwka Female Chorus, Pavlychenko Folklorique Dance Ensemble, a video by the Ukrainian class at the University of Saskatchewan, singer/bandurist Andrij Hornjatkevyc, and adult and children’s choirs.

Boston commemorated the Shevchenko bicentennial with a wreath-laying at a bust of the poet on the parish grounds in front of Christ the King Ukrainian Catholic Church on March 9. Two days later on March 11 in Cambridge, a concert was held featuring bass-baritone Pavlo Hunka with music of composers to the words of Shevchenko. The major salute came on March 15 with a three-hour-long homage consisting of speeches, videos and musical selections before a crowd of over 300 people at the Pickman Concert Hall. 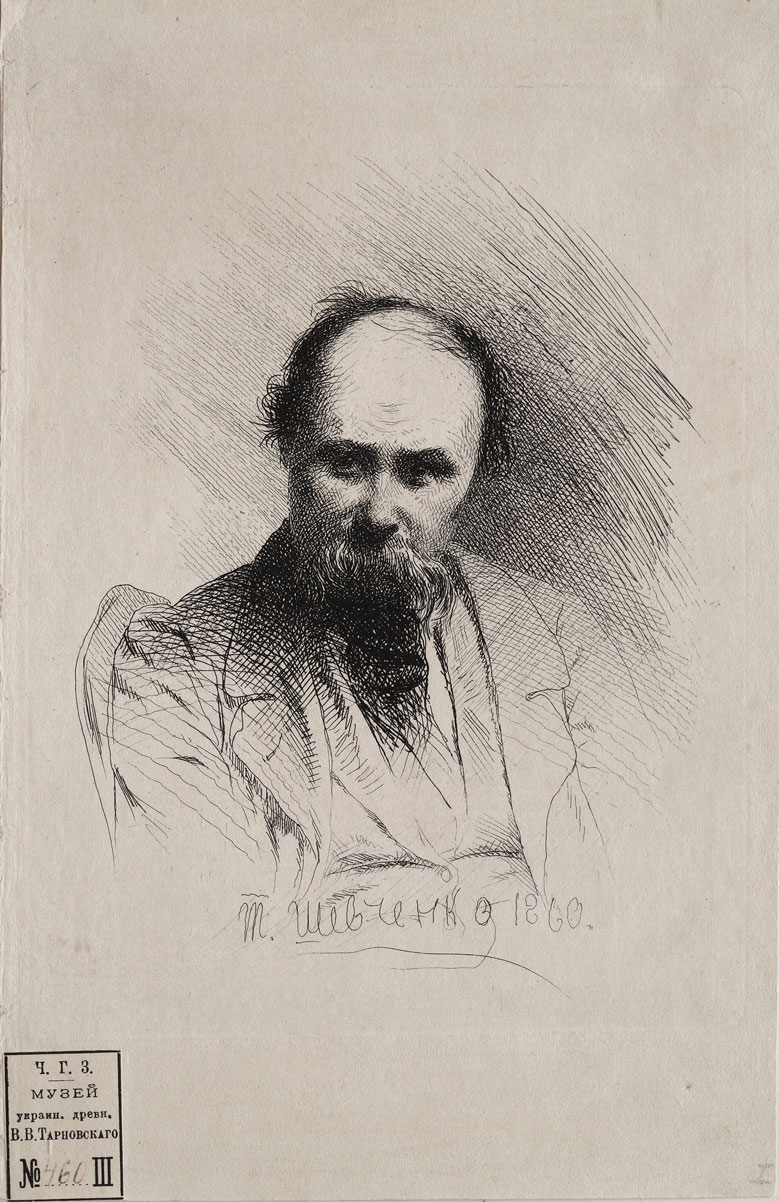 Taras Shevchenko’s etching “Self-Portrait in a Light Suit” (St. Petersburg, 1860), was among the works in the exhibit “Taras Shevchenko: Poet, Artist, Icon” on view at The Ukrainian Museum on June 29-November 2.

On March 8 at the Ukrainian Institute of America in New York, a commemorative concert, “Shevchenko and Shakespeare,” presented Mr. Hunka singing the bard’s songs set to music by Lysenko, Stepovyj and Turkewych, and a song cycle recently composed by Ukrainian composer Oleksandr Jakovchuk to Shakespeare sonnets translated into Ukrainian by Ostap Tarnavsky. This was part of the continuing Ukrainian Art Song Project, founded by Mr. Hunka and composer Roman Hurko, whose goal is to record an anthology of 1,000 art songs of the best Ukrainian composers in the last 150 years.

The Ukrainian Institute of Modern Art in Chicago also hosted a concert commemorating the 200th Shevchenko anniversary. Donations were earmarked to help the families of the victims of violence on the Maidan. The concert featured a premiere of the composition “Poslaniye” (Epistle) by Ukrainian composer Yuri Laniuk, performed by the Northwest Chicago Symphony and the Chicago Ukrainian Community Choir, conducted by Michael Holian, with soprano Ludmila Ostash, pianist Natalia Pelekh and cellist Nazar Dzhuryn, and recitations from the “Kobzar” by actor Bohdan Kozak from the Zankovetska Theater in Lviv.

Ukrainians gathered at the Taras Shevchenko monument in Washington on June 28 to honor Ukraine’s poet laureate on the 50th anniversary of his statue’s unveiling in the U.S. capital. Featured among the speakers were Ukraine’s Ambassador Olexander Motsyk and Dr. Paula Dobriansky. The Prometheus Men’s Chorus of Philadelphia sang songs set to the bard’s poems.

After four months of repairs, the 1964 Shevchenko monument in Washington was reopened in November. Following years of neglect, National Park Service contractors restored the foundation and replaced the old crumbling concrete pavers in front of the monument. 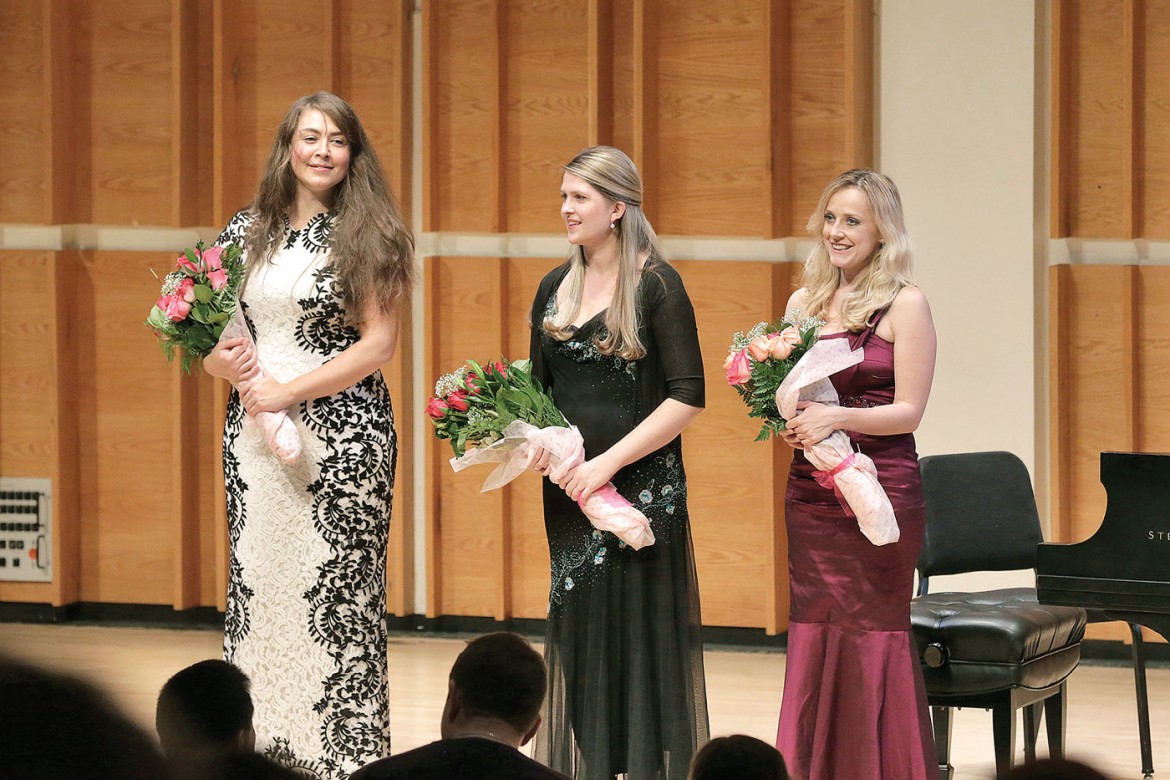 On November 1, The Ukrainian Museum in New York and the Yara Arts Group presented “Ira Aldridge and Taras Shevchenko: Two Icons and Friends,” a program exploring the friendship between the great African American Shakespearian actor and the Ukrainian poet. Part lecture, part poetry readings, the evening was introduced by Broadway star Andre De Shields, known for his roles in “The Wiz” and “Ain’t Misbehavin’.” Aldridge and Shevchenko were both artists, and both fought against slavery and identified with their peoples. During Aldrich’s 1858 tour of Russia, the two met and became fast friends. Shevchenko drew a well-known portrait of the famous actor, which was on loan from Kyiv to The Ukrainian Museum in the fall, as part of its comprehensive exhibit “Taras Shevchenko: Poet, Artist, Icon.”

Bandurist Julian Kytasty, dancer and choreographer Inka Juslin and poet Taras Malkovych opened the ninth season of the Bandura Downtown concert series at The Ukrainian Museum in New York on October 25. Mr. Kytasty recalled his recent summer tour of Ukraine and visits to the estates where Shevchenko lived, and the monasteries and churches he painted. The songs performed were ones Shevchenko himself sang or would have heard from the lirnyky and kobzari of his day.

The Ukrainian Bandurist Chorus under Oleh Mahlay presented two concerts based on Shevchenko texts in New York and Philadelphia on October 18 and 19.

A “Poetry Slam” evening was held in The Ukrainian Museum in New York where audience members were invited to read Shevchenko in the original or translations. Prof. Alexander Motyl was the moderator of the event, which heard translations of Shevchenko into English, French, German, Slovak, Hungarian and Yiddish.

Composer Virko Baley gave an interesting interview in The Weekly (November 2) about Shevchenko’s musical tastes and how this affected the December 7 Merkin Hall program featuring soprano Oksana Dyka and violinist Solomiya Ivakhiv. A singer himself, Shevchenko was particularly fond of opera and vocalists. He loved operas by Donizetti, Meyerbeer and Rossini, and had a long friendship with Hulak-Artemovsky, composer of “Zaporozhets beyond the Danube.” He thought very highly of Mozart, Haydn, Beethoven, Chopin and Mendelssohn. Doubtless he attended performances of “Othello” and other Shakespearian plays when Aldridge toured the area. When the music was being selected for the Dyka/Ivakhiv recital, the aim was to pick pieces written to the words of Shevchenko and selections he knew of, or heard and loved from world musical literature, Dr. Baley explained. That is why Ms. Dyka opened the evening with Bellini’s “Casta Diva” and included arias by Mozart and Rossini.

The Ukrainian Institute announced the Shevchenko Essay Contest winners. The topic was “Taras Shevchenko – Why Does He Matter Today?” and was intended to explore the bard’s legacy and continued impact; all essays had to be written in English. The top three winners were students from universities in Kyiv, Ivano-Frankivsk and Nizhyn. Because there were so many worthy essays submitted, the UIA and judges decided to award 30 additional merit awards of $100 each, in addition to the 10 honorary mention prizes of $300 each.