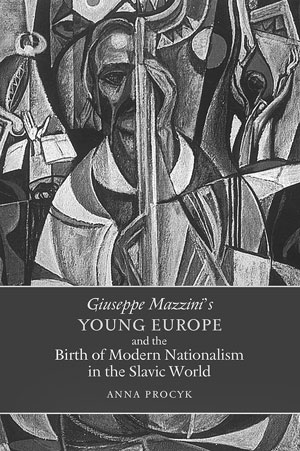 The current vogue for conspiracy theories reminds us how hard it is to either prove or disprove the existence of a conspiracy. The difficulty is compounded when the alleged conspiracy took place in the distant past. Even when it is an accepted fact, its necessarily secretive nature resists historians’ efforts to reconstruct its formation, activity, and ultimate fate. Historians rely on documents, and documents are one thing that conspirators avoid leaving behind.

In her monograph on Giuseppe Mazzini’s “Young Europe” and Slavic nationalism, Anna Procyk untangles the conspiratorial webs of revolutionary movements in 1830s Europe – a task that involves considerable sleuthing as well as subtle analysis. Her main thesis is that, contrary to the accepted view, the Ukrainian revival of the 1830s was not merely cultural, but decidedly political. In fact, the young activists’ cultural projects often served as a cover for secret revolutionary work. This explains why during the “Spring of Nations” in 1848 the two surviving members of the “Ruthenian Triad” could find common cause with Polish liberal democrats more readily than with the politically conservative, clerically dominated and dynastically loyal Supreme Ruthenian Council. This fact has been obscured by subsequent developments, when Poles and Ukrainians not only went their separate ways, but turned against each other. It has also been ignored by the nationalist and Soviet historical schools, neither of which was much interested in foreign influences or connections except, in the latter case, Russian ones.

The catastrophic effects of 20th-century nationalism have distorted our view of its early 19th-century predecessor. Dr. Procyk demonstrates the influence in the 1830s of Giuseppe Mazzini’s Italian nationalism, which far from the chauvinism, intolerance, and authoritarianism with which the term is associated today, envisioned a brotherhood of free and equal nations. This nationalism also had a spiritual component, as it held that “the recovery of authentic national traditions and values was essential for the moral regeneration of a subjugated nation and that, without such spiritual renewal, no meaningful progress in the political, economic, and cultural sense was possible” (p. 198).
It was natural that this kind of nationalism should have found resonance among the clergy of Czechs, Slovaks, Ruthenians, and other peoples. For while the Italian Carbonari movement had been determinedly anti-clerical, Mazzini, for all his opposition to Rome and the Catholic hierarchy, saw the East European parish priest as a valuable promoter of revolution. And although the Polish revolutionaries remained resentful of the papacy after it condemned the November 1830 uprising, they at least saw the clergy as a useful link to the peasantry.

At the same time, the religious factor in Mazzinian nationalism persisted in its East European variants. It is thus not surprising that among the nationalist hotbeds of the 1830s was the Lutheran seminary in Bratislava, as well as the Greek-Catholic seminary in Lviv. A number of early East European “awakeners” were in fact Protestants, such as the Polish Calvinist Szymon Konarski and the Slovak Lutheran František Kampelík. The spiritual current was translated figuratively as well as literally into the language of the Slavic Society of Saints Cyril and Methodius founded in Kyiv in 1846, better known as the Brotherhood of Saints Cyril and Methodius.

Numbering Taras Shevchenko and Mykola Kostomarov among its members, this short-lived underground group echoed the ideals of Young Europe and Young Poland in a pan-Slavic context, emphasizing sovereignty, equality, and Christian moral and ethical principles (including, the author notes, a rejection of the common revolutionary tenet that the end justifies the means). One can see more than a trace of the ideology of Young Europe, as well as of its Czech and Slovak proponents, in Shevchenko’s 1845 poem “The Heretic,” dedicated to the scholar Pavol Josef Šafařík and honoring the Czech reformer Jan Hus.

In the course of her narrative, Dr. Procyk throws new light on some old mysteries, such as that involving Mykola Kostomarov and the “widow Zaleska,” and the authorship of the pamphlet “Słowo Przestrogi” signed by Vasyl Podolynsky but probably authored by the “prefect-conspirator” at the Lviv Greek-Catholic seminary, the Rev. Mykola Hordynsky.
She also suggests that by blocking publication of the anthology “Zoria” (the predecessor of the landmark “Rusalka Dnistrovaia” published in Buda in 1837), the Lviv censor Venedykt Levytsky may have protected its young revolutionary authors from arrest by the Austrian authorities. Along the way, Dr. Procyk takes some jabs at both Soviet and Western scholarship, the former for over-stressing Russian revolutionary influences and missing an important classical allusion, the latter for applying 20th-century theoretical concepts to 19th-century phenomena.

The volume is handsomely designed, printed and bound, with an attractive jacket illustration by Opanas Zalyvakha. A text of this quality, however, deserves more careful proofreading and editing.

Anna Procyk’s monograph represents decades of thorough research, much of it archival. It demonstrates that Ukrainian intellectuals, while divided between the Russian and Austrian empires, cultivated strong ties with their Italian, Polish, Czech, Slovak, and Balkan counterparts. Its value, however, goes beyond its important contributions to our knowledge of modern Slavic nationalism. At a time when nationalism has degenerated into chauvinism and consequently fallen into disrepute, it reminds us that it in its original form, nationalism not only united those who shared an ethnic and linguistic heritage, but embraced all peoples seeking independence in fraternal equality.

In Mazzini’s view, “the best-suited nations to lead the future democratic revolution in Europe would be those nationalities whose history was not tainted by domination over others” (p. 161). Thus, “Giuseppe Mazzini’s Young Europe” serves as a reminder to a somewhat demoralized and disoriented European Union of its own core ideals, and of Ukraine’s role in their realization.