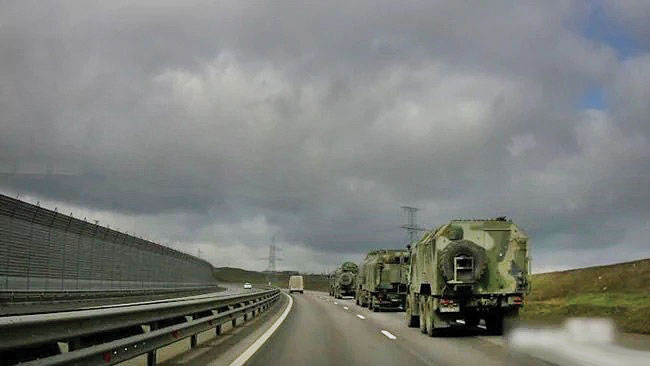 A convoy of Russian military equipment is seen on the move in Crimea on March 24.

The Kerch Strait Bridge to the occupied Crimean Peninsula shut down briefly, apparently for a major shipment of weaponry.

An uptick in shelling along the line of control separating Ukrainian forces from Russia-backed fighters in eastern Ukraine. Ominous rhetoric on Russian state TV.
Is the Ukrainian-Russian “cold war” about to go “hot”?

Amid talk of war, here are six questions framing the flareup in tension between Russia and Ukraine – and some potential answers.

Isn’t there already a war?
Yes. The conflict in the eastern Ukrainian region known as Donbas began seven years ago this month and, despite multiple cease-fire agreements, has never really ended. More than 13,000 people have been killed since April 2014, according to the United Nations, and more than 1 million have been displaced.

The last bout of large-scale fighting occurred in January 2017 in the town of Avdiyivka, but sniper fire and mortar exchanges happen regularly – the deadliest in months occurring on March 26, near Shumy, north of the city of Donetsk.

More than 70 Ukrainian military personnel have been killed and several hundred wounded since the beginning of 2020, Ukrainian officials say.

Since late March, though, there’s been a noticeable uptick in Russian troop movements close to Ukraine’s borders and into Crimea, which Russia seized in March 2014.
It’s also set off alarm bells in Western capitals.

What’s with all that equipment?
Over the past two weeks or so, there’s been a steady accumulation of photographs, video, and other data suggesting major movements of Russian armed units toward or near Ukraine’s borders and into Crimea. 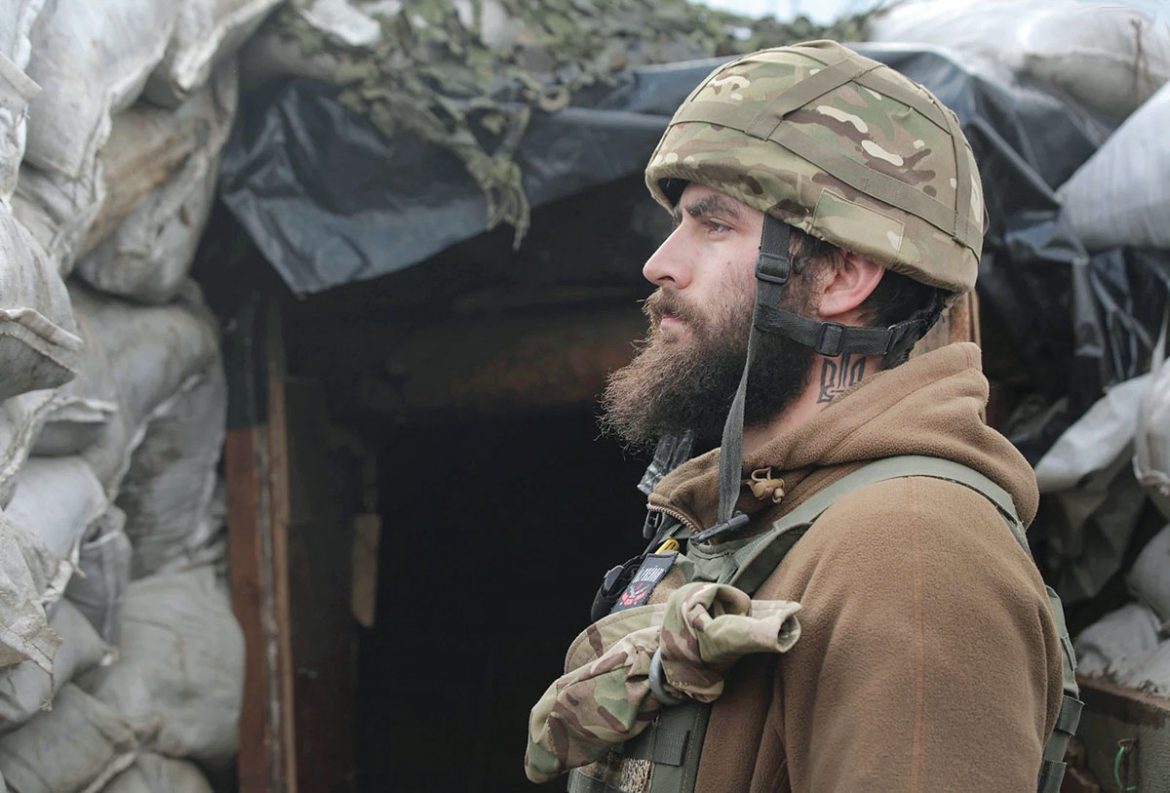 A Ukrainian soldier stands guard near Donetsk. Kremlin spokesman Dmitry Peskov says there is nothing to fear and that the repositioning of military forces within Russia’s borders is a strictly domestic concern.

That’s sent open-source researchers, journalists, and others to try to geolocate the imagery and divine the intentions of Russian military command, not to mention the Kremlin.

One prevailing theory is that this is merely a show of force aimed at spooking or intimidating Kyiv and sending a message to the West that Russia is willing to put “boots on the ground” – and a lot of them – very quickly.

“The ostentation with which the troops are being moved confirms that Russia is saber-rattling rather than contemplating a blitzkrieg,” Maksim Samorukov, a fellow with the Moscow Carnegie Center, said in an opinion piece published on April 5.

Observers have also pointed out that Russia has done large troop movements in the past, in connection with regular military exercises, without invading. Some analysts say these deployments don’t seem to make sense in that context.

What does Russia say?
Not much, or not much that’s clear.

Kremlin spokesman Dmitry Peskov last week turned away reporters’ questions about the troop movements, saying that there was nothing to fear and that the repositioning of armed units within Russia’s borders was a strictly domestic concern.

When it comes to Crimea, though, Kyiv and the West – and nearly all of the rest of the world, for that matter – do not accept that, because they do not accept Moscow’s claim to the Black Sea peninsula.

Meanwhile, Russia’s Southern Military District, the command unit with responsibility for areas near the border with Donbas and the North Caucasus, announced it was conducting an annual readiness check, with several dozen related exercises being held between March 29 and April 30. (The district also technically oversees Russia’s military command for Crimea.)

A few days earlier, Russia’s defense minister added further to the fog. On March 25, Sergei Shoigu announced that a paratrooper unit based in the northwestern city of Pskov, the 56th Air Assault Brigade, would be reorganized and redeployed to the Crimean port of Feodosia. The closure of the Kerch Strait Bridge was reported to be connected with the transport of related equipment.

But while Russia regularly conducts large-scale, district-wide training exercises – often involving thousands of troops, and dozens of units, across wide areas – some observers have said the scale of the equipment movement seen of late is far beyond normal.
On April 6, Mr. Shoigu announced broader-scale exercises in all military districts nationwide.

Isn’t there a cease-fire?
The oft-violated cease-fire in eastern Ukraine stems from the Minsk accords. A two-part deal, the second was signed in February 2015 by Ukraine and Russia, along with Russia-backed separatists who hold parts of Ukraine’s Donetsk and Luhansk regions. The Organization for Security and Cooperation in Europe (OSCE) was also a signatory.

There’s also the Normandy Format: a grouping made up of Russia, Ukraine, France and Germany that has been trying to end the conflict. That goal has been elusive due to factors that include Russia’s funding and support for the militants in eastern Ukraine, internal Ukrainian politics, and German and French wavering on how forcefully to confront Moscow – and how much support to give Kyiv. 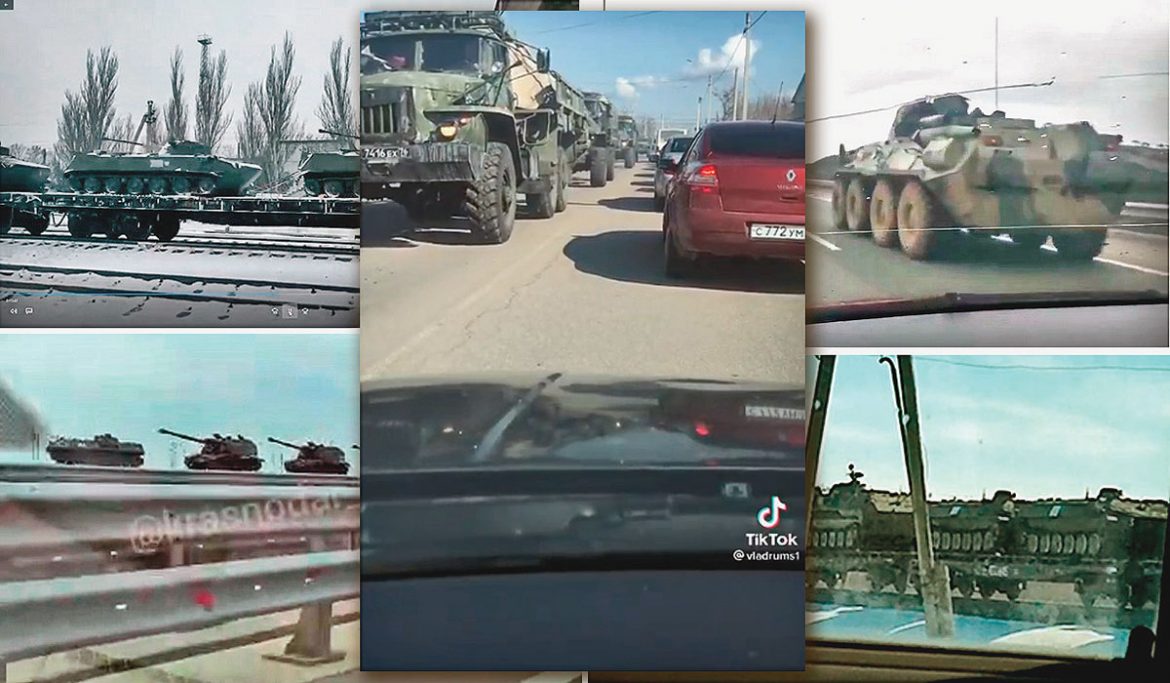 In a statement issued on April 3, the German Foreign Office called for restraint in the current tension, but also used the phrasing “all sides” – which drew criticism from some officials who said it equated threatening Russian troop movements with Ukraine’s defensive posture in Donbas. (As of April 7, there was no public evidence suggesting Ukraine is doing similar large-scale equipment movement – and, unlike Russia in Crimea, any deployments it is making are inside its borders.)

The European Union, meanwhile, has spoken up in support of Ukraine. But the bloc’s lead diplomat, Josep Borrell, was humiliated when he traveled to Russia in early February in an effort to mend fences with Moscow, leading observers to conclude that the EU has little leverage with Russia in this specific context.

Moscow may be trying “to make it clear to the West that the more it backs Ukraine rhetorically, the more the potential risk that it might be forced to make good on its promises,” Mark Galeotti, an analyst and author on Russia, wrote in a column for BNE Intellinews. “This is, after all, something the Kremlin thinks Europe in particular is unwilling to do.”

What about the United States?
Observers also say the timing and scope of the Russian maneuvers suggest a challenge to the United States and in particular President Joe Biden. He’s been one of Ukraine’s staunchest supporters dating back to the period leading up the outbreak of war in 2014, when he was vice president.

Washington hit Russia with sanctions after the seizure of Crimea, and despite his often-conciliatory rhetoric, Mr. Biden’s predecessor, Donald Trump, kept those sanctions in place.

Mr. Biden’s administration has signaled a more confrontational approach: neither reset nor escalation, U.S. officials have said repeatedly since Mr. Biden took office In January. “We have asked Russia for an explanation of these provocations, but most importantly what we have signaled directly with our Ukrainian partners is a message of reassurance,” State Department spokesman Ned Price said on April 5.

The new U.S. administration has hit Moscow with economic sanctions in response to the near-fatal poisoning of opposition activist Aleksei Navalny with a military-grade nerve agent and to his imprisonment when he returned to Russia from Germany three days before Mr. Biden’s inauguration. The administration has also threatened unspecified action for a massive cyberattack on U.S. government computers, which it has blamed on Russian intelligence.

On April 2, in Mr. Biden’s first phone call with Ukrainian President Volodymyr Zelenskyy, the U.S. leader pledged “unwavering” support. That call was preceded by calls between top U.S. defense and military officials and their Ukrainian counterparts.

While the E.U. has provided hundreds of millions of euros to help Ukraine build a more functional, and less corrupt, government, the United States has provided weaponry and training to Ukrainian forces, including anti-tank missiles, night-vision goggles, and counter-battery radars.

That effort continued on March 1, with the U.S. Defense Department announcement of another $125 million in new aid: “capabilities to enhance the lethality, command and control, and situational awareness of Ukraine’s forces through the provision of additional counter-artillery radars and tactical equipment; continued support for a satellite imagery and analysis capability; and equipment to support military medical treatment and combat evacuation procedures.”

The Kremlin bitterly opposes the notion that Ukraine could someday join NATO. But while Kyiv’s membership in the alliance seems to be a distant prospect, that hasn’t stopped Mr. Zelenskyy from making public statements about it. “We are committed to reforming our army and defense sector, but reforms alone will not stop Russia,” he said on Twitter after speaking with NATO’s secretary-general. “NATO is the only way to end the war in Donbas.”

What’s Russia’s endgame?
If there is a Kremlin endgame beyond a couple of big military exercises and relocating a combat brigade, it’s certainly not clear to Washington, Kyiv or other Western capitals.
But one other place to look for guidance is how Russia has handled other simmering conflicts in its backyard. These so-called “frozen conflicts” have persisted in several places since the Soviet collapse, including Georgia’s breakaway regions of Abkhazia and South Ossetia, as well as Transnistria in Moldova.

In all of them, Russian forces have deployed and remained, either as peacekeepers or as fully garrisoned units, though in reality, they go in unilaterally without the blessing of the United Nations or the OSCE and end up destabilizing the status quo in favor of Moscow.
Deploying international peacekeepers to Donbas under the aegis of the Vienna-based OSCE has been discussed in the past. Those proposals, however, have been hung up on questions including whether they would be allowed to patrol the Russian-Ukrainian border or merely the line of control in Ukraine.

Many observers say that Russia seems unlikely to risk a renewal of full-scale war or an attempt to seize more Ukrainian territory, at least for the time being. James Sherr, the former head of Chatham House’s Russia program, has suggested that putting a Russian peacekeeping force inside Ukraine may be Moscow’s desired endgame.

“A localized escalation, dramatic and devastating, leading to the deployment of Russian ‘peacekeepers’ on the current demarcation line, is probably the most realistic option,” he wrote in a commentary for the International Center for Defense and Security in Estonia.