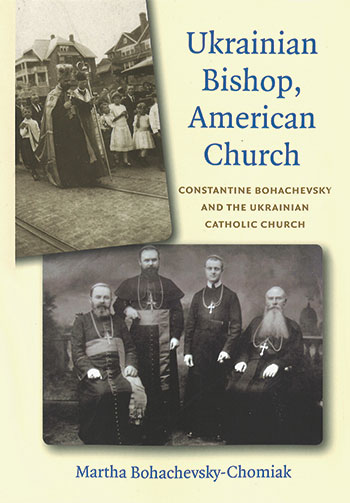 This is an exemplary work of scholarship on the life and legacy of Bishop Constantine Bohachevsky of Philadelphia, who was the only bishop-eparch of our Ukrainian Catholic Church in the United States from 1924 to 1956 (the time of the separation of the Stamford Eparchy in Connecticut from that of Philadelphia) and its first metropolitan-archbishop of Philadelphia from 1958 to his death on January 6, 1961 (Christmas Eve on the Julian Calendar).

It is written by his niece in fine respect of the character and work of her uncle. The author herself is known in academic surroundings as an American university professor and a Fulbright scholar. It is this latter fact that provides the book with relentless hours of scholarship using archival resources that were available to her from resources in Stamford and Washington, from the Vatican, and from state archives in Ukraine and Poland.

This book far outweighs any previous works written on the history of the Ukrainian Catholic Church in the United States. Other books seem like mere historical surveys in comparison to this work formatted as a critical biography.

The book serves as both a biography of Bishop Bohachevsky as well as an assessment of the trials that he underwent in service to the Church and to a fledging immigrant community far from eastern Galicia in a country where to be Catholic meant you were Latin or Roman Catholic.

The book presents the formation of the character of this gifted churchman from his early priestly years of service in Lviv and Peremyshl (presently called Przemysl, and located in Poland) during the 1910s and 1920s. It particularly captures his relationship with Bishop Iosafat Kotsylovskyi of the Peremyshl Eparchy as his vicar general from 1918 to 1924. In 1924, he was secretly consecrated a bishop and sent to a new missionary territory: to serve as the jurisdictional exarch/bishop for Ukrainian Greek-Catholics whose roots were from eastern Galicia.

Thus begin over 35 years of dedicated service to his Church and his people in the United States – a time when he inherited a Church that was chaotic in its structure. He faced great opposition from both clerical and lay circles in this new land, and survived with a steady hand and an unflinching spiritual character. It was only in the 1930s that structure began to take shape of his vision for this Church in a new and foreign land.

New crises arose with the suppression of the Mother Church in its homeland, both under the Polish rule of pacification of Galicia and the two Soviet occupations of the same territory separated only by the Nazi invasions of Eastern Europe and World War II. He became the main voice of our Church in the diaspora following its forced suppression in the homeland in 1945. He had to meet the needs of displaced refugees (both priests and laity) in German and Austrian camps and preserved for many a life-saving existence.

There is so much that can be said of the character of this noble churchman in scanning through a book of over 500 pages and six decades of ministry that cannot be adequately addressed in this review.

I believe that Bishop Constantine strove with all his qualities to establish the acceptance of the Ukrainian Catholic Church in the American Catholic community. To me, he did not prefer the usage of the term “Greek Catholic” in this land – he simply used “Ukrainian Catholic” on all the corporate titles of new parishes and institutions that were either founded by him or under his jurisdiction. [e.g. The Ukrainian Catholic Seminary Inc. was founded in 1933 in Stamford – it later became St. Basil Prep and St. Basil College Seminary.

This book deserves to be in every parish and seminary library and cannot be overlooked by anyone interested in Ukrainian American church history. For me, the book clearly shows a comparative greatness between the Venerable Metropolitan Andrey Sheptytsky, our Church leader in Western Ukraine from 1901 to 1944 for our entire Church, and that of the dedicated churchman that Bishop Constantine was in being the lead voice for our Church in the free world from 1924 to 1961.

Msgr. John Terlecky is director of the Ukrainian Museum and Library in Stamford, Conn.