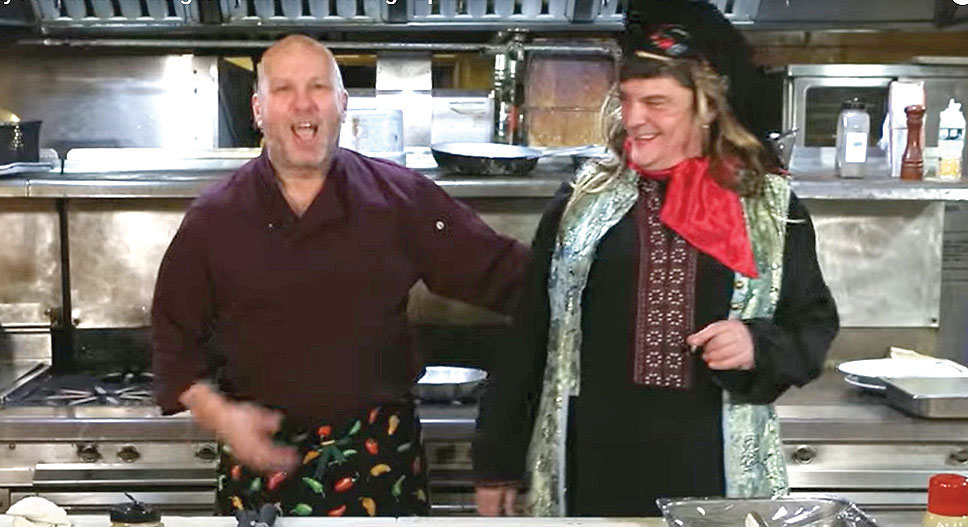 MORRISTOWN, N.J. – A wide circle of members and friends of the Ukrainian National Women’s League of America (UNWLA) Branch 75 of Morris County, N.J. were treated to an afternoon of delightful entertainment this past winter: a Zoom cooking class led by renowned and beloved chef Andrey Sonevytsky of Soyuzivka Heritage Center in Kerhonkson, N.Y.

Mr. Sonevytsky has spent nearly his entire life cooking. He graduated from the Culinary Institute of America in 1995 with a degree in Culinary Arts. As part of his credentials, Mr. Sonevytsky interned at three well-known restaurants in New York City: the Tribeca Grill, Montraché and NOBU. Soon after, he started to work at Soyuzivka, training under the mentorship of Andrij Lesiw. Shortly after, Mr. Sonevytsky took over as head chef at Soyuzivka, where has worked since.

The concept of the cooking program, titled “Chef Andrey Sonevytsky Presents: The Lighter Side of Cooking, Episode 1,” was originally proposed by Branch 75 President Irena Sawchyn. The idea was unique and simple: to have Mr. Sonevytsky lead a cooking class over the Zoom video conferencing platform where remote participants could cook along with the chef in their own kitchens, and at the end of the class have a full dinner ready to be served.

To that end, Mr. Sonevytsky designed a three-course menu of potato leek soup, chicken roulade stuffed with spinach and cremini mushrooms and crème bruleé. A list of the necessary ingredients and instructions were available in advance of the class for those who chose to cook at home while watching Mr. Sonevytsky demonstrate his techniques. In order to have the three courses ready to serve as a complete meal at the end of the show, the sequence began with the crème bruleé, which takes the longest to complete, followed by the roulade and the soup.

While the cooking demonstration was pre-recorded, Mr. Sonevytsky was available live during several pauses in the presentation to answer questions from the participants. Over 70 people logged in and a good number cooked at home during the program.

The resulting performance was much more than a typical cooking show – the hour was funny, charming, entertaining, as well as a professional cooking lesson. 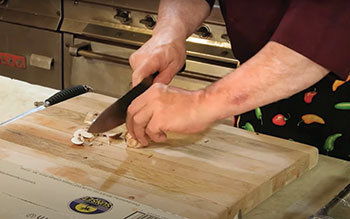 Mr. Sonevytsky demonstrated how to use a bain-Marie to cook the custard evenly; he showed viewers how to cut mushrooms quickly and efficiently, and how to pound a slice of chicken breast to twice its original size until it was a scallopine cut.

There were many subtle jokes, such as when Mr. Sonevytsky advised viewers that he used “salty salt, not unsalty salt” in his cooking. The questions from the at-home chefs were pertinent and brought out real-life problems encountered in following the recipes. What if the chicken breast just couldn’t be rolled with the stuffing? The answer was simple – remove the stuffing, pound the chicken slice a little thinner, and if the chicken still refused to be rolled, order out for pizza! There was even a surprise guest appearance from “Pani Kyshka” (Andrew Oprysko) who kept trying to add cat food to the menu.

The cooking class by itself would have met everyone’s expectations, but Mr. Sonevytsky and colleague Roman Iwasiwka supplemented the cooking program with musical interludes performed by the Soyuzivka-based group “Mystaree” (“we are old” in Ukrainian) with Mr. Sonevytsky showing his skills at the piano, bass and vocals, Mr. Iwasiwka on guitar and vocals, and young Pavlo Mysak on guitar. Olya Fryz sang “Love Song” with touching delicacy.

The showstoppers were “Pani Handzya” and “Pani Nooszka” (played by Messrs. Sonevytsky and Iwasiwka) who appeared at the beginning of the video and again at the end. They performed the roles of two hilarious elderly Ukrainian “babusias” to perfection, capturing with precision the diction and syntax of that generation.

UNWLA Branch 75 was very grateful for the extraordinary program which was so much more than originally envisioned. The cinematography, editing and lighting were executed professionally by Marko Iwasiwka. The video (without the live commentary from Mr. Sonevytsky) can be seen on YouTube at https://www.youtube.com/watch?v=FLbzoIimCnM. Enjoy and smachnoho!