Events at the Maidan, the subsequent invasion and illegal annexation of Crimea, and the unprovoked invasion of eastern Ukraine by the Russian military had a profound impact on both Ukraine and the Ukrainian diaspora. One of the consequences in Ukraine was the extraordinary and totally unexpected surge of a volunteer movement that mobilized a significant segment of the population. The Ukrainian diaspora in the U.S., as well as in many other countries, also rose to the challenge and has been providing generous support to the Ukrainian army and people.

The current crisis presents an opportunity for evaluating to what extent the Ukrainian community in the U.S. has the capability of influencing U.S. policy and the media. For example, the significant achievement of having Congress approve meaningful support for Ukraine’s defense efforts has not been implemented; so far the current administration has refused to act on it. On the media front, after a surge of reporting during the Maidan and the initial stages of the invasions of Crimea and eastern Ukraine, current events in Ukraine are rarely mentioned in the mainstream media.

In the political arena, the highest level achieved by an American of Ukrainian origin (Ukrainian, for short) was by Dr. Myron Kuropas, as the advisor on ethnic affairs to President Gerald R. Ford, and this was many years ago. There was also Dr. George Kistiakowsky, who played a key role in the development of the American atomic bomb and served as chairman of President Dwight D. Eisenhower’s Science Advisory Committee. However, there is no evidence of any active support of Ukrainian issues on his part, other than stating that he was Ukrainian. There have been other Ukrainians in high government positions, like Rear Admiral Dr. Boris Lushniak, deputy surgeon general of the U.S., who for a time was acting surgeon general, but so far we have not had governors, congressmen, senators or Cabinet secretaries.

We also do not have top-level journalists, producers or TV anchors who can influence the coverage of events in Ukraine. Except for the occasional article by the president or the prime minister of Ukraine, practically all articles on the current situation in Ukraine published in influential newspapers and journals are written by Americans of non-Ukrainian origin. One exception is Prof. Alexander Motyl with his very successful blog on the World Affairs website, but this is not the same as being published in The New York Times or The Wall Street Journal.

A current project that coordinates and publicizes on a daily basis news about Ukraine in the media and think tank papers, led by Wolodymyr Zaryckyj, is extremely useful. What sets it apart is its continuity, in contrast to many useful but sporadic or short-lived initiatives. However, most flagged articles are by journalists or experts of non-Ukrainian origin, and the same goes for articles written by experts at think tanks in the U.S. and other countries.

One can contrast this state of affairs with the achievements of other ethnic/racial groups in the last 10 years or so. There has been an extraordinary increase in the number of Americans of Hispanic and Asian origin in high-level political positions, recognized experts in foreign policy and top-ranked media professionals. Thus, one can pose the question why is it that, despite their more than 100-year immigration history, Americans of Ukrainian origin have stayed away from politics and journalism?

The database developed by the Center for Demographic and Socio-Economic Research of Ukrainians in the United States allows us to shed some light on this question. We compare Ukrainians with the total U.S. population using indicators like: education level, strategic occupations, percent self-employed, poverty, household income, home ownership and value of the home. Indicators are analyzed at the national level and for metropolitan areas with about 2,000 or more Ukrainians. This provides an objective, data-based picure of the socio-economic status of Americans of Ukrainian vis-à-vis the total U.S. population, and their prevalence of occupations related to politics and the media. All results are based on data for 2010.

The following indicator is used to measure level of education: percent of persons age 25 or over with a master’s degree or higher. Ukrainians, for the purposes of this analysis, are persons who declared “Ukrainian” as their single, first or second ancestry (the American Community Survey (ACS)  and the census allow respondents to provide one or two ancestries). Data for Ukrainians are averages of yearly ACS surveys for 2009, 2010 and 2011 (centered in 2010); data for the U.S. population are from the ACS of 2010.

The percentage of Ukrainian households with graduate-level education varies from a minimum of 6 percent in Asheville, N.C., to a maximum of 57 percent in Madison, Wis. In eight MAs the percentages are under 10, while in five MAs the percentages are 40 percent or higher. In many MAs the difference between Ukrainians and total U.S. population is substantial. In 11 MAs this indicator is three or more times higher for Ukrainians than for all households: Cincinnati, Dallas, Houston, Jacksonville, Fla., Madison, Wis., Miami, Nashville, Tenn., Richmond, Va., Salt Lake City, San Francisco, and Tucson, Ariz. Jacksonville is an extreme case, with 33 percent Ukrainians with master’s degrees or higher and only 8 percent for all households.

Thus, the high level of educational achievement among Americans of Ukrainian origin provides an adequate number of potential candidates for successful careers in politics and the media.

Occupation characteristics are analyzed along two dimensions: a) general characteristics of a successful group; b) specific occupations related to politics and the media. Occupation data are for persons age 16 and older, currently employed in the civilian labor force and not living in group quarters.

The data confirm the well-deserved reputation of Ukrainians as hard workers; their unemployment rate in 2010 is 7.5 percent, compared to the national rate of 9.6 percent. Another indicator of success is entrepreneurship, measured here by the percentage of self-employed persons in the labor force, with 11.9 percent for Ukrainians and 9.8 percent for total U.S. Furthermore, among all self-employed persons, the percentage incorporated was 38.0 percent among Ukrainians and 33.6 percent in the total U.S. population.

In the case of legislators and judges, we have separate data for these occupations in the 2000 census that show no Ukrainian legislators and judges. Thus, for Ukrainians in 2010 the first occupation category contains only chief executives and the second category only lawyers and other judicial workers. (It is important to keep in mind that these are sample data with a certain level of sampling error. For example, there was at least one federal judge of Ukrainian origin in 2000, but he was not included in the sample used in the analysis.)

The table shows the percentage of each occupation within the total labor force for Ukrainians and the total U.S. population. To refine the analysis, we also use a more restricted U.S. population, excluding minorities that tend to have a lower socio-economic status like Blacks, Native Indians and non-white Hispanics.

Regarding media-related occupations, the number of Ukrainian announcers is extremely small, and Ukrainians have proportionally more news analysts, reporters and editors than the two U.S. populations. However, these occupational categories are too broad and imprecise to allow us to make any conclusions about the presence of Ukrainians in the mainstream media. Anecdotal evidence suggests that if there are any Ukrainians in the mainstream media, they do not seem to advertise their Ukrainian origin.

We also saw that there seem to be no legislators of Ukrainian origin, either at the federal or state level. Also, there have been no Ukrainians in federal Cabinet positions.

Two other types of occupations deserve comment. First, the relative numbers of Ukrainian dentists and physicians is three times for dentists and two times for physicians and layers, when compared to the total U.S. labor force.

Second, data on the occupational category athletes/coaches/umpires provides interesting insights into the occupational preferences of Ukrainians in the US. First, we see that the 0.21 percent of the total U.S. population in this category drops to 0.04 percent when we exclude minorities with lower socio-economic status, confirming the well-known fact that minorities tend to be over-represented in professional sports. Second, the respective percentage for Ukrainians, 0.24 percent, is higher than the percentage for the total U.S. population. Thus, while Ukrainians have higher levels of education than the total U.S. population, their proportion of athletes is much higher than the proportion in the U.S. population without minorities. The actual numbers of the selected occupations for Ukrainians are also shown in the table. As a side comment, of the 1,400 athletes, coaches and umpires, 194 were born in Ukraine, documenting the influx of athletes from Ukraine in recent years.

The database developed by the Center for Demographic and Socioeconomic Research of Ukrainian in the U.S. contains detailed information on the income characteristics of Ukrainians. We will discuss data on level of poverty, household income, percent home ownership and value of the home.

The percentage of Ukrainians in the U.S. that are below the poverty level is significantly lower compared to the total U.S. population: 9.8 percent and 15.3 percent, respectively. In 18 percent of the 78 metropolitan areas with at least 1,860 Ukrainians in 2010, the percentage below poverty is 3 percent or less. The level of poverty is related to the proportion of Fourth Wave immigrants in the MA. In almost all MAs with 50 percent or more Fourth Wave immigrants, the percent below poverty for Ukrainians is higher than for the total population. In two of these MAs, Asheville, N.C., and Greenville-Spartanburg, S.C., Ukrainians have extremely high levels of poverty, 42 percent and 46 percent, respectively.

Thus, in the majority of MAs, Ukrainian households have higher income than all households in the MA, and in some cases the differences are quite large. However, in almost one-fourth of the MAs, median household income among Ukrainians is lower than for all households. Although a large percentage of Fourth Wave immigrants in an MA tend to reduce the median income, the relationship is not universal. Extreme exceptions are Ann Arbor, Mich., Atlantic City, N.J. and Reading, Pa., where Ukrainians have lower median income than all households, while the percentage of Fourth Wave immigrants is less than 5 percent.

The majority of wealthy Ukrainian households are concentrated in a few cities. About half of all Ukrainian households with an annual income of $200,000 or more live in six MAs: New York, with 19 percent, Washington, with 8 percent and Los Angeles, Chicago, Philadelphia, and San Francisco, with 5 percent to 6 percent of high-income households.

In three MAs, median house values are about equal for both Ukrainians and all households. In nine MAs the median values are higher for all households than for Ukrainians: Albany, N.Y., Fort Lauderdale, Fla., Hartford, Conn., Ocean City, N.J., New York, Portland, Ore., Sacramento, Calif., Scranton, Pa., and Seattle. In some cases, the relative differences between the medians is substantial. In five of these nine MAs, the relative difference in the median house value is 5 percent or less, 8 percent in Albany, 14 percent in Scranton, 19 percent in Fort Lauderdale, and 21 percent in Sacramento. Thus, in these five MAs the average house values of Ukrainians are significantly lower than the values of all houses in the MA.

Our analysis leads to two conclusions: a) given their relatively higher socio-economic status, Ukrainians in the U.S. have the potential of achieving high-level political and top media positions; b) the recent influx of immigrants from Ukraine, so called Fourth Wave, has not affected this status one way or another. The realization of this potential poses challenges both at the individual and organized community levels. 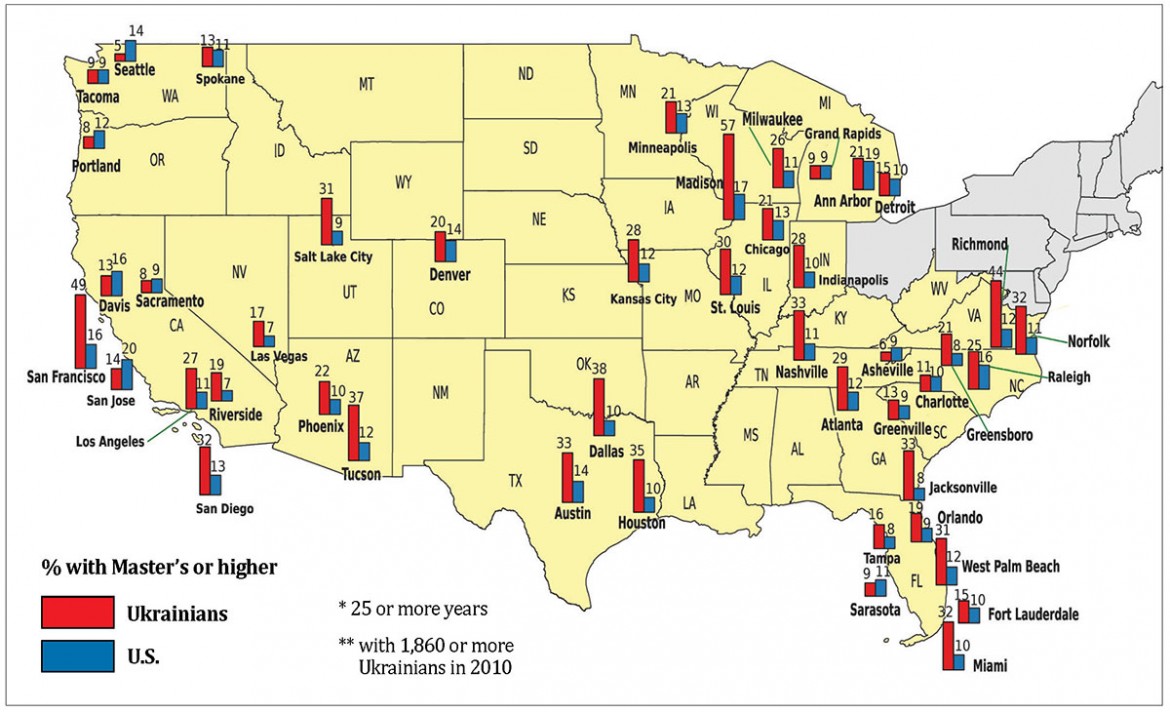 Map 1A – Percent with Master’s or Higher Education* for Ukrainians and Total U.S., by Metropolitan Area**, 2010 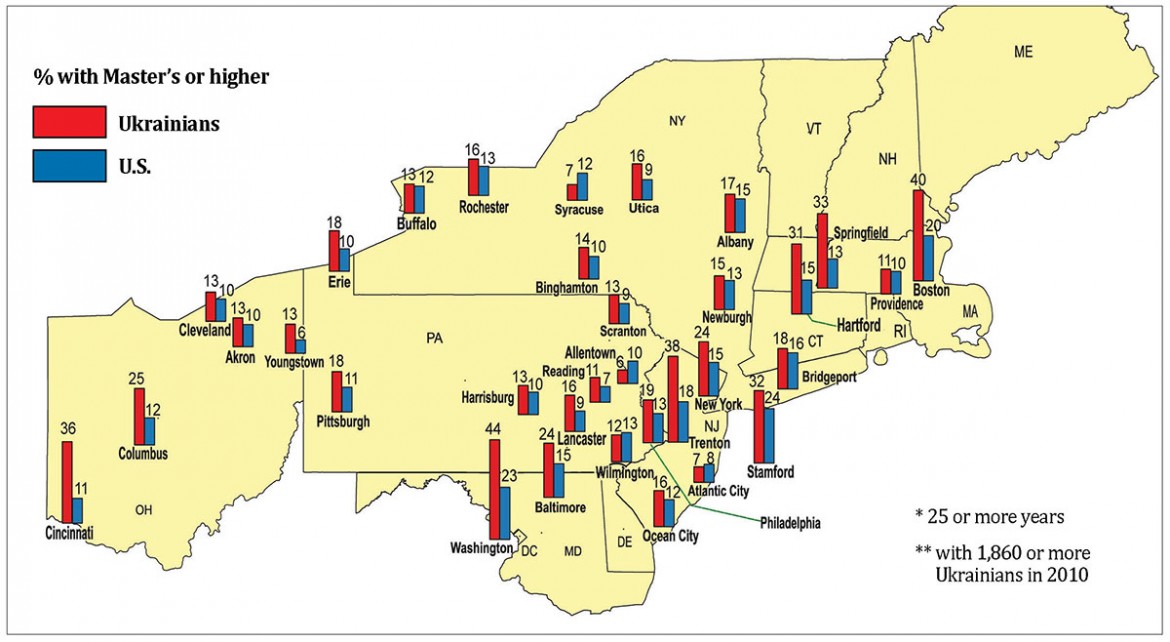 Map 1B – Percent with Master’s or Higher Education* for Ukrainians and Total U.S., by Metropolitan Area**, 2010 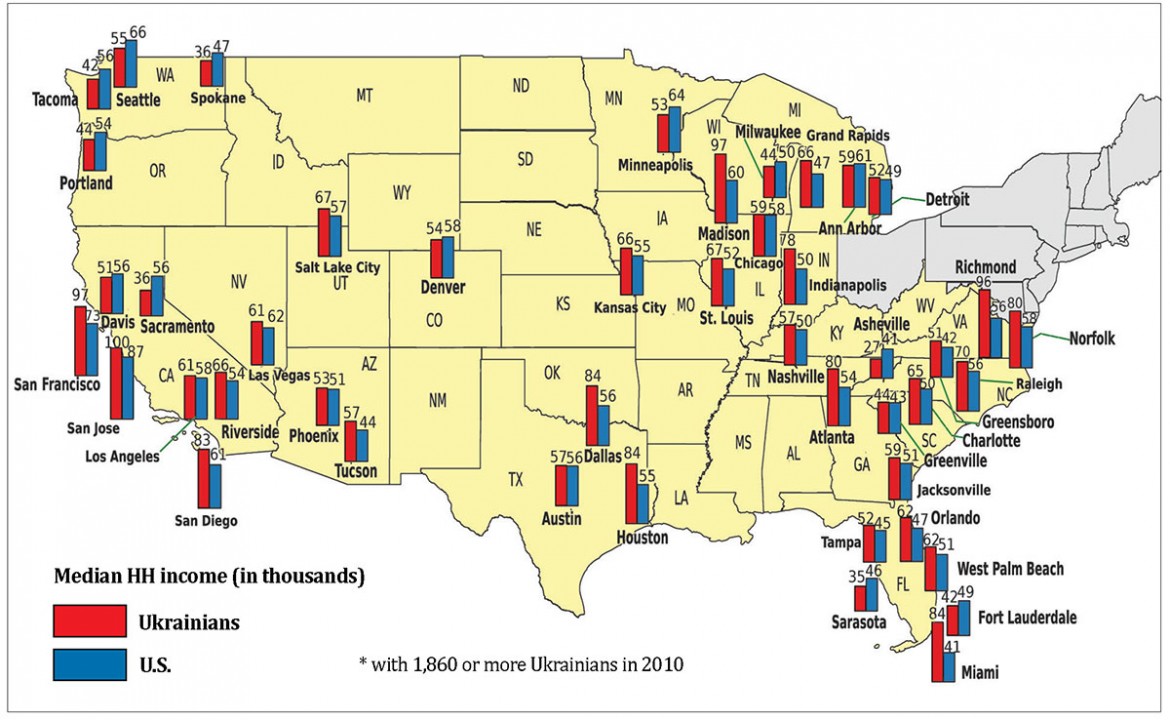 Map 2A – Median Annual Household Income for Ukrainians and Total U.S. by Metropolitan Area*, 2010 (in thousands) 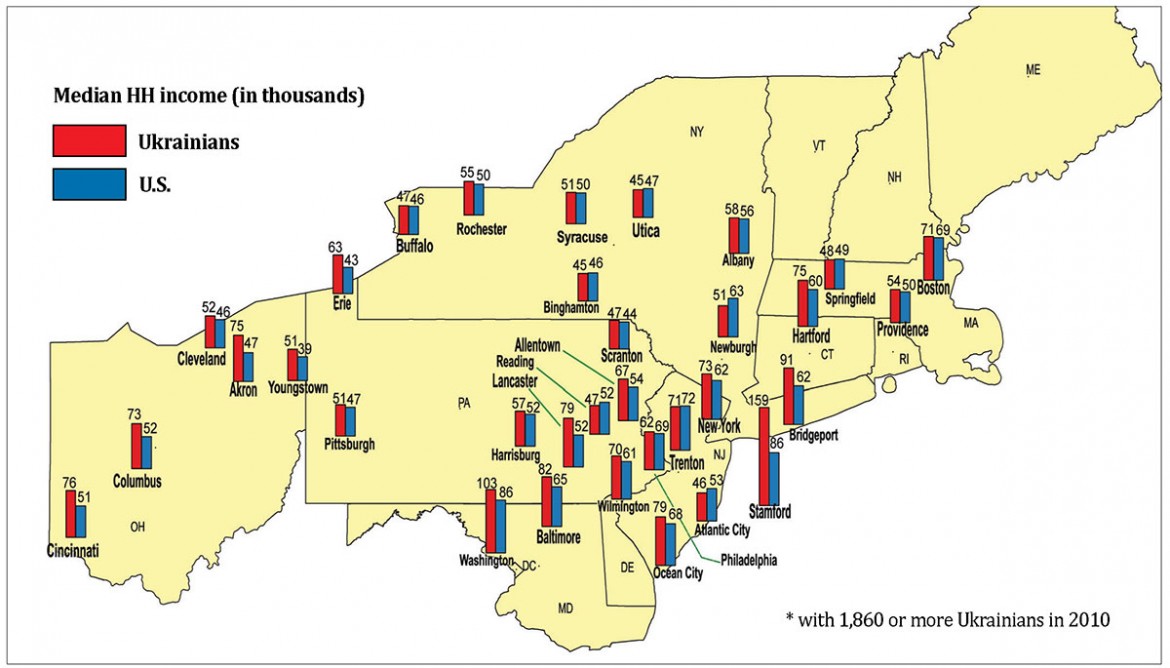 Map 2B – Median Annual Household Income for Ukrainians and Total U.S. by Metropolitan Area*, 2010 (in thousands)