Every first Sunday morning in November, there is a hum in the air of the largest city in the world. It seems to be silently waiting for an important event to begin. It is the quiet before the storm, the eye of the hurricane. This event gathers tens of thousands participants from all over the world and millions of fans and spectators, including many Ukrainians. This worldwide event awakens the soul of New York City. This momentous grand event is the New York City Marathon. 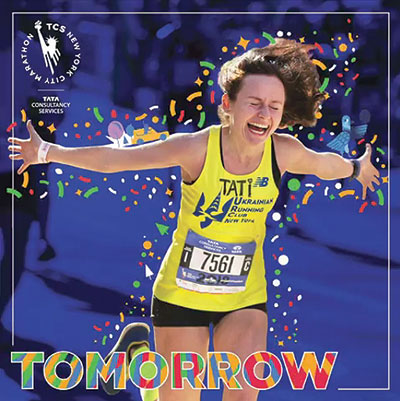 Tetiana Samokysh as she appeared in a poster used as an online advertisement for the New York City Marathon. She is wearing a Ukrainian Running Club New York tank top.

The New York City Marathon is the largest running event in the world. The race course runs through all five boroughs of the city – Staten Island, Brooklyn, Queens, Manhattan and the Bronx – and ends at Central Park. The total marathon distance is 26.2 miles or 42.195 km.

If one decides to run the marathon, a recommended training schedule entails an average 16 weeks of running – that’s 40 miles per week, 160 miles per month and 640 miles per training cycle, which equals more than 100 hours of running. That is exactly what is needed to run this long distance, to overcome oneself and to fulfill one’s dream of becoming a true marathon runner.

But you will not be alone while trying to pursue this dream. New York City will not let you give up on it because not only is it the biggest marathon in the world but every square inch of the course is filled with screaming, yelling, banner-holding New Yorkers telling you to “Go, go, go!” And if you write your name on your shirt, you will feel like a rock star on the red carpet hearing your name every couple of feet as the crowd supports you. New Yorkers bring water, bananas, oranges and napkins to share with the runners. They even play live music all along the course to keep everyone going. It truly is the biggest and friendliest running party in the world. This year, 53,509 runners partied and ran their way to the finish line.

Just as the New York City Marathon is the biggest day of the year for the city, for the Ukrainian Running Club New York (URCNY) the marathon is the biggest running event of the year. The fun all begins on Friday, two days before the big event. There is a special marathon opening ceremony – the Parade of Nations, which gathers more than 120 delegations representing their countries. For the URCNY it is a wonderful opportunity to share our rich Ukrainian culture with the world.

Every year the crowd looks forward to our Ukrainian dancers clad in traditional Ukrainian costumes dancing the Hopak as they lead our delegation along the Central Park parade route. This year we did not disappoint as our dancing friends at Art Studio Brewster joined us and wowed the crowd.

The next day, Saturday, according to marathon tradition, runners should be carbo-loading with lots of pasta for energy for the next day’s run. Our club organized a Ukrainian style pre-marathon dinner for all runners, family and friends. Besides the pasta there were plenty of varenyky for all runners to load up on at the Streecha Ukrainian Restaurant in the East Village.

This year’s marathon was probably the most successful for the Ukrainian Running Club as 60 URCNY members ran, while 79 officially declared Ukrainians finished this year’s race. Our club has runners representing several countries, starting with Ukrainian Americans, some born here and others who have become U.S. citizens, and native Ukrainians, as well as runners from Mexico and China.

The whole club takes part in the marathon, so if you are not running then you are out there on the course supporting those who are. We have two official URCNY cheering spots: one at mile 6 in Brooklyn to get the runners off to a good start and the second one at mile 24 to give them a last big boost of energy with smiles, cheers, hugs, shouts of “Go, Ukraine!” and Ukrainian flags waving them all to the finish line. Thousands of stories full of happiness, suffering, pain and joy cross the marathon finish line, and among them are a few stories of our Ukrainians.

For Roman Pyasta, originally from Ivano-Frankivsk, Ukraine, but currently living in Wisconsin, this New York City Marathon would be his 48th marathon overall. So he decided he was going to run it for the fun of it. It is worth noting that, since Mr. Pyasta is a very fast runner, he had about 2 hours and 45 minutes to “enjoy” this event. 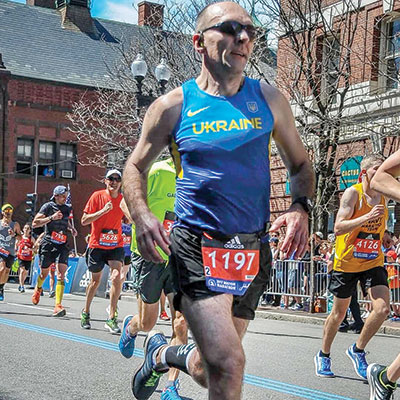 Roman Pyasta of Milwaukee is the 50th best marathoner in the world in the 45-49 age category.

But according to Mr. Pyasta, the marathon gods had a little gift for him toward the end of the race… “On the last long 23rd mile climb, I was overtaken by another Ukrainian from our Ukrainian Running Club New York: Yevhen Hodun, who flew in from Kharkiv [Ukraine], to participate in the marathon. This changed the potential slow ‘torture’ to the finish into a cool 5 km race. We both wanted to run well but also to have fun. So when he overtook me, it woke me up and completely changed my mood: it became a one-on-one race. And so it began: I passed him, then he passed me over the hills and turns of Central Park. We sprinted faster than anyone, as if on two motorcycles, overtaking everyone, left and right. And the spectators were frantically cheering for both of us: Go Ukraine for the whole 5 km! In the final sprint we both pushed our hardest and I overtook him by only 2 seconds, but we fought like two lions for those seconds.”

Mr. Pyasta’s time: 2:46:28; Mr. Hodun’s time: 2:46:30. After the finish, both men shook hands, received their medals and took a commemorative photo together. It is interesting to note that there is 20-year difference between them – Mr. Pyasta is 48 and Mr. Hodun is 28. When asked about the age difference, Mr. Pyasta said he didn’t even notice it, that his brain just ignores meaningless numbers. You can be young in body and heart at any age.

Six major marathons in a year

Yuriy Bezsonov, originally from Poltava, Ukraine, and now living in Germany, is only the eighth Ukrainian in the world to receive a Six Majors Medal. This medal is given to those who run the six largest marathons in the world in one year.

Here are his impressions of all the marathons: “Six marathons in one year is not easy – I had my ups and downs: cold Tokyo, joyous Boston, calm London, unexpected Berlin, tough Chicago and beautiful New York. I am so happy that I did it and even happier to receive my 6th major medal star here in New York, where I heard ‘Go, Ukraine!’ on almost every street corner. New York is amazing!”

Running the marathon to help others

The Ukrainian Running Club’s fast and well-known runner Dmytro Molchanov ran the New York City Marathon this year as a pacer. A pacer is soneone who leads a group of runners in the marathon for a specific time. They run the entire distance evenly, by the clock, holding the same speed.

Mr. Molchanov’s motivation was to help others achieve their goals: “Being part of New York’s running community and supporting people on the way to the finish line is a great experience. I am happy to have the opportunity to help other runners.” But the best part that shows what a great perspective he has on life and himself was this: our Mr. Molchanov ran the whole race in a crown and a yellow tutu. He is the URCNY King of the New York City Marathon.

It’s all about love

Vladyslav and Olena Bezuglov, originally from Odesa and now living in Brooklyn, started running only a year ago. They never expected to be running marathons, much less running and crossing the finish line of the New York City Marathon hand in hand together.

“We fell in love with running here in New York – the heart of the world – and it has become our new life. We dedicate this marathon to the strongest feeling in life – love, as well as to faith in ourselves and in our limitless possibilities. New York, we love you!”

I must say that never in a million years did this writer dream that I, once a little girl from Kherson, would end up on subway posters all over NYC and Internet advertising for the New York City Marathon – the biggest and most famous marathon in the world. I guess you could even say I even became a little famous for my “It will excite you” poster. Let me tell you how this happened.

The New York City Marathon has my heart. I have a smile on my face and in my heart from start to finish. Every second, as I am running the course, I am totally overcome with love for all. For the crowd, for my fellow runners, for the whole magical experience. For me it is one big love fest. My dream is to run the marathon in New York every year, but this year it was even more special as I got to share that love with the World as it was captured in a photo at the finish line.

Last year, about 100 meters from the finish, I saw my friends from the Ukrainian Running Club cheering me on and I was completely overwhelmed with such warmth, love and genuine joy that I just flew over the finish line. It was like my heart burst open right then and there – and click – this amazing moment was captured forever by a photographer at the finish line and that moment became a subway ad for the 2019 New York City Marathon. I am so happy that that my heart-opening moment invites people to come to watch or run with me in this incredible love event. Running changes lives, hearts and souls for the better.

Maybe after reading some of our running stories and meeting some of our URCNY running personalities, readers will be tempted to come join us and awaken their running soul to have your own heart-opening run through New York City. The next New York City Marathon will be its 50th jubilee, so this is a great opportunity to join the Ukrainian Running Club and start training. Find us on Facebook under Ukrainian Running Club New York or on Instagram @urcny. The lottery for the next marathon opens on January 13.

The URCNY and NYC are waiting for you!

Tetiana Samokysh is a board member of the Ukrainian Running Club New York.

The article above was translated by Lada Lysniak.