The Ukrainian National Women’s League of America (UNWLA), which is celebrating its 95th anniversary this year, has worked through the decades to answer some of Ukraine’s challenges brought about by events in the tumultuous 20th and 21st centuries. Today, one of the great challenges for Ukraine is the current fighting in the east. The war in the Donbas has killed thousands and injured many more. These injuries are not only physical, but leave emotional and spiritual scars as well.

Since the war in eastern Ukraine began, the UNWLA has supported both the physically wounded through its War Victims’ Fund established in 2015 and the psychologically war-traumatized through the Prostir Nadii project. The latter is part of the Mental Health Institute of the Ukrainian Catholic University established in 2016. Last year, the UNWLA launched its newest project, the Spiritual Rebirth of Ukraine, aimed at restoring the spiritual health of the individual.

At the initiative of Marianna Zajac, the president of the UNWLA, the Spiritual Rebirth of Ukraine Fund was established, specifically supporting two religious academic institutions: the Kyiv Three Saints Theological Seminary (KTSTS) of the Ukrainian Greek-Catholic Church and the Volyn Orthodox Theological Academy (VOTA) of the Orthodox Church of Ukraine. In the context of a hybrid war with Russia, the spiritual mission of these institutions is extremely important, as it is a struggle for the spiritual revival of that part of Ukraine most affected by the cruel policies of tsarist Russia, the Soviet Union and Vladimir Putin’s Russia.

Recently, Orysia Soroka, member of UNWLA Branch 137, had an opportunity to speak with the rectors of these two institutions, Father Volodymyr Vakin of VOTA and Father Petro Zhuk of KTSTS, to better understand the work of these institutions in the spiritual revival of Ukraine. The rectors spoke broadly about the mission of their respective Churches but also specifically about the work of their particular academies. Below is a summary of that discussion. 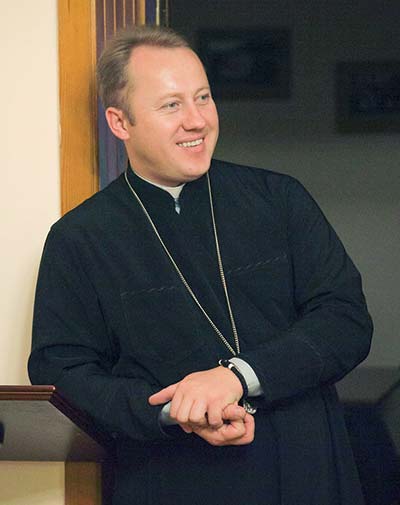 Regarding VOTA, Father Vakin explains that it is one of the few Ukrainian state-licensed religious educational institutions that offers bachelor’s and master’s degrees in the field of theology, and graduates cantors of church choirs. Its principle of working with students combines tradition and modernity. “Because passions, sins and temptations remain the same, the ways of overcoming them have been passed down from the Fathers of the Church. On the other hand, the academy is open to modern technologies,” says Father Vakin.

Several years ago, a fiber-optic based Internet connection was installed, providing high-quality access to worldwide data. Еach classroom in the academy has a plasma screen, enabling videoconferencing and various visualization programs. Through the efforts of the UNWLA, the academy has been equipped with computers. He states that, “although we are ready for higher education, the financial base is lagging.”

Father Vakin discussed the relationship between VOTA and the Ukrainian Greek-Catholic Church and its scientific and educational institutions. VOTA is working in cooperation with the Ukrainian Catholic University (UCU) on several joint projects. VOTA is also cooperating with the Institute of Ecumenical Studies at UCU.

Regarding the spiritual and educational work of the Orthodox Church of Ukraine, especially in the eastern regions of Ukraine, he explained that many Orthodox priests have become chaplains in the army and are doing double pastoral work. Besides caring for the spiritual well-being of soldiers, the priests are also working with the local population.

“We can’t even imagine the way of thinking of the local population,” noted Father Vakin. They associate their salvation with territory, not with Jesus Christ. They believe that only through “Russian peace” will they be saved. When you ask about the Orthodox Church of Ukraine, the answer is “America is to blame for everything, because it wants to destroy the Russian Church, which stands for truth.” According to Father Vakin, “Because the people truly believe such nonsense, the mission for enlightenment is extremely important.”

Father Vakin gave an example related to the Orthodox Church in Volnovakha, Donetsk region. There, Father Macarius, a graduate of VOTA, is beloved by the people. In 2014 the Ukrainian community was small, but now includes a cultural center near the church. The community plays a significant role in the life of the city. Lutsk and Volnovakha are twin cities. Recently the leaders of Volnovakha city and district traveled to VOTA. According to Father Vakin, their views are increasingly pro-Ukrainian. He explained that achieving such a turnaround is a painstaking job that requires understanding, patience and love.

One of the most important contemporary challenges for the Ukrainian community is the psychological rehabilitation of soldiers returning from the war in the Donbas. Father Vakin explained that the Orthodox Church of Ukraine is doing a great job working with volunteers and psychologists on the mental rehabilitation of soldiers. This requires a team approach that includes a priest, a psychologist and a psychiatrist. The priest explains the situation in terms of spiritual values. The psychologist provides advice when there is emotional weakness. The psychiatrist prescribes medication if necessary. Previously, there were no chaplains in the Ukrainian army. “In our master’s program, much attention is paid to chaplaincy,” said Father Vakin.

Father Zhuk, rector of KTSTS, explained that the seminary is designed to educate priests for the Kyiv Archdeparchy which includes the five central regions of Ukraine (Kyiv, Cherkasy, Chernihiv, Zhytomyr, Vinnytsia), as well as Kharkiv, Donetsk, Odesa, the Lutsk exarchates and Crimea. The mission of the seminary is very unique, because it not only educates priests for eastern and central Ukraine, but it trains them to be community leaders for these areas.

Father Zhuk explained that there is a lack of nationally patriotic educated people who could be drivers in their communities. Therefore, in addition to performing religious duties, the priest very often must act as a catalyst for cultural, spiritual and patriotic upbringing. For example, he must teach the community how to organize their town or village, make grants, write projects and organize efforts such as cleaning up the garbage.

Father Zhuk added that in the east there is no tradition of attending church services as there is in western Ukraine. Very often, the road to God for these local people does not begin with a spiritual need, which is very shallow or non-existent, but rather through a socio-cultural-patriotic path.

Father Zhuk explained that the problem associated with returning soldiers from the war zone is very acute and urgent, because in the current state of the hybrid war, a portion of Ukrainian territory is experiencing fighting and dying, while most of Ukraine lives a normal life. The greatest difficulty for soldiers when they return home is seeing this dichotomy – despite the war, people back home sit in restaurants and have fun.

“The state is not yet ready to provide the soldiers with the necessary assistance to adapt to this change,” said Father Zhuk. He went on to say: “Therefore, the Church has partly undertaken this mission. There are tremendous opportunities, because the Church is almost everywhere, and the network for church assistance is better organized than state social services.”

His seminarians visit a military hospital in Kyiv every Saturday. They visit every soldier in the ward. For some patients, there is a need to just talk, sometimes to pray and sometimes to help, because the soldier is brought directly from the war zone having no personal belongings with him. “Our seminarians sacrifice their day off so that the wounded don’t feel left behind and to show appreciation for their sacrifice for Ukraine,” noted Father Zhuk.

The discussion with the two rectors ended with Father Vakin thanking the UNWLA for not being indifferent, and expressing his gratitude: “We are grateful for your sincerity, compassion and humanity. It is really inspiring when, for the love of Ukraine, distances and other conditions do not matter. You make us feel that we are not alone in our aspirations and endeavors.”

Father Zhuk also gave a heartfelt thank you to the UNWLA and to all who understand and support the education of future priests. He ended by saying: “It is possible to assist a parish, or a priest, or even some social structure, but to help a seminary means to help not only a priest, but the overall social, military and patriotic spheres as well.”

According to Ms. Zajac, “The interview with the two rectors underscores the importance of the UNWLA’s Spiritual Rebirth of Ukraine project. By donating to this fund you are helping to educate new priests for central and eastern Ukraine. You are helping to create a new environment for people who will change the face of eastern Ukraine. All donations go toward seminarians’ tuition as well as for classroom needs and equipment and are equally divided between the two academies.”

Please help support this endeavor. Checks should be made out to “UNWLA” with the notation “Spiritual Rebirth of Ukraine” and sent to: UNWLA, 203 Second Ave., New York, NY 10003. More information can be found on the UNWLA’s Facebook page as well as on the UNWLA website at www.unwla.org.

The article above is based on two separate interviews conducted by Orysia Soroka. The Ukrainian-language interviews were published in the December 2019 and February 2020 issues of Our Life magazine, which is published by the Ukrainian National Women’s League of America.