One of the most consistent falsehoods that Russian propaganda levels at Ukrainian nationalists is that they are “fascists” and “Nazi collaborators” who were responsible for the murder of Jews during the Holocaust. While there were individuals involved in crimes against humanity among Ukrainians, the proportion is not any bigger than that of any other European nation – in fact it is smaller than most. As for the number of people listed as “Righteous Among Nations,” the title bestowed by Israel on those who saved Jews during the Holocaust, Ukraine ranks fourth behind Poland, the Netherlands and France. 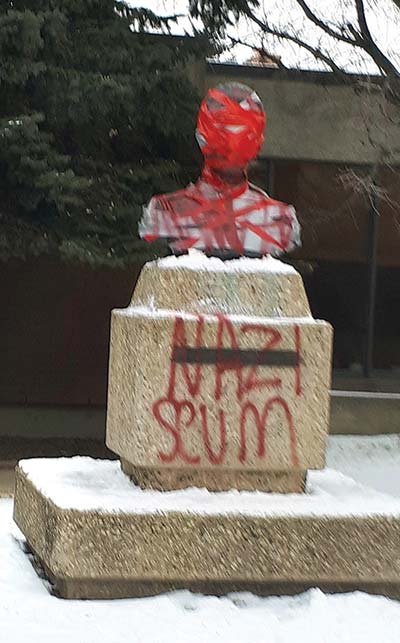 The defaced bust of Roman Shukhevych in Edmonton. (Photo taken the morning after the act of vandalism).

But Moscow does not care about any such details, instead tarring anybody and everybody who opposed the totalitarian Soviet Union in the past, and its successor regime, the Russian Federation, in the present with the brush of fascism. The objective is twofold: first, to drive wedges between the Ukrainian and Jewish communities; and second, to rationalize its own continued aggression against Ukraine. In this campaign Moscow often relies on various proxies and surrogates.

The Ukrainian community in Canada, particularly in Edmonton, Alberta, has been subjected to a number of such false accusations in the media lately. So much so that the Ukrainian Canadian Congress – Alberta Provincial Council has set up a special committee to respond to such charges.

First came a grossly distorted report titled “Canadian officials honor Nazi collaborators in Ukraine, angering Jewish groups,” published in the National Post, flagship of Canada’s largest newspaper chain – PostMedia. The article by David Pugliese, who has quite a reputation for writing anti-Ukrainian drivel, was subsequently reprinted in a number of other PostMedia papers. Using very selective snippets of information, Mr. Pugliese quoted Eduard Dolinsky, director-general of the Ukrainian Jewish Committee, to back up his contention that Jewish groups are supposedly angered by the ceremony. The Ukrainian Jewish Committee is a marginal group and not representative of Ukraine’s Jewish community at large. Its president, Oleksandr Feldman, is a member of Parliament for the pro-Russian Our Land party that was created as a refuge for former members of the Party of Regions headed by Viktor Yanukovych. Mr. Dolinsky himself is a contributor to the separatist website, Nova Rossiya Today

What Mr. Pugliese conveniently ignored was the fact that the ceremony of sanctification in Sambir of the future “Remember” Memorial Complex to victims of World War II in Ukraine (which was held a month before his report) was organized by the Kyiv City Jewish Committee and the Toronto-based Ukrainian Jewish Encounter. It was attended by the primate of the Ukrainian Greek-Catholic Church, Patriarch Sviatoslav; the primate of the Orthodox Church of Ukraine, Metropolitan Epiphaniy; and the chief rabbi of Ukraine, Yaakov Dov Bleich.

The ceremony was held to seal the compromise achieved earlier to move three crosses from the territory of the Jewish cemetery and to erect a monument to 17 young Ukrainians, members of the Organization of Ukrainian Nationalists (OUN), who were shot by the Nazis in July 1944. While two of the three crosses still remain at the Jewish cemetery, both parties are working to correct this.

The writer also ignored the fact that the mainstream organization of Jews in Ukraine, the Association of Jewish Organi­zations and Communities of Ukraine, issued a statement in which they expressed “full confidence in and support of the Ukrainian Jewish Encounter, the Kyiv City Jewish Community and Rabbi Yaakov Dov Bleich in their efforts to memorialize Nazi victims and organize the mourning ceremony in Sambir.”

Two months later, on the eve of this year’s Holodomor commemoration, a University of Alberta assistant lecturer wrote a Facebook post in which he went far beyond the usual refuge of contemporary genocide deniers, who claim the Holodomor was really a crop failure and not a genocide against Ukrainians because members of other nationalities died as well, and denied that there even was a famine. Instead, he said, it is a “myth” created by “Hitlerite Nazis,” part of an “even larger myth that millions died in the Soviet Union.” He added that that “in Canada, former Nazi collaborators and their spawn have long led the phony Holodomor campaign.” Although the Ukrainian Canadian Students’ Union, the Ukrainian Canadian Congress and many other Ukrainian community organizations as well as members of the community at large, called upon the university to censure and fire Dougall MacDonald, it did not. “As a private citizen, Mr. MacDonald has the right to express his opinion, and others have the right to critique or debate that opinion,” said Deputy Provost Wendy Rodgers. Many in the Ukrainian community wondered whether the result would have been different had he written a similar comment on the Holocaust.

Late last year, the Edmonton Jewish News attacked the Ukrainian Youth Unity Complex for having a monument to the Ukrainian Insurgent Army (UPA) Commander-in-Chief Roman Shukhevych, who they claimed was active in the genocide of Jews. When the Youth Unity Complex sent in a reply – noting that Shukhevych initially joined the German forces invading the USSR because they we fighting against the Soviets due to the old adage that the enemy of my enemy is my friend, but quickly turned against the Nazis when they too began committing atrocities against the people of Ukraine; that a declassified internal NKVD document clearly stated that Shukhevych gave an order to Ukrainian troops not to participate in a 1941 pogrom against Jews as it was a German provocation; and that his wife hid and saved a Jewish girl – the paper refused to print it. Instead, vandals desecrated the monument – the entire bust was covered with red ribbons and the caption “Nazi Scum” was spray-painted on the base of the statue. The matter is under investigation by the Hate Crimes and Violent Extremism Unit of the Edmonton Police.

This ongoing campaign is something members of our community in both Canada and the United States have to take very seriously. We must redouble our efforts to ensure the public at large is made aware of the true history of Ukraine and not be deluded by Russian propaganda.