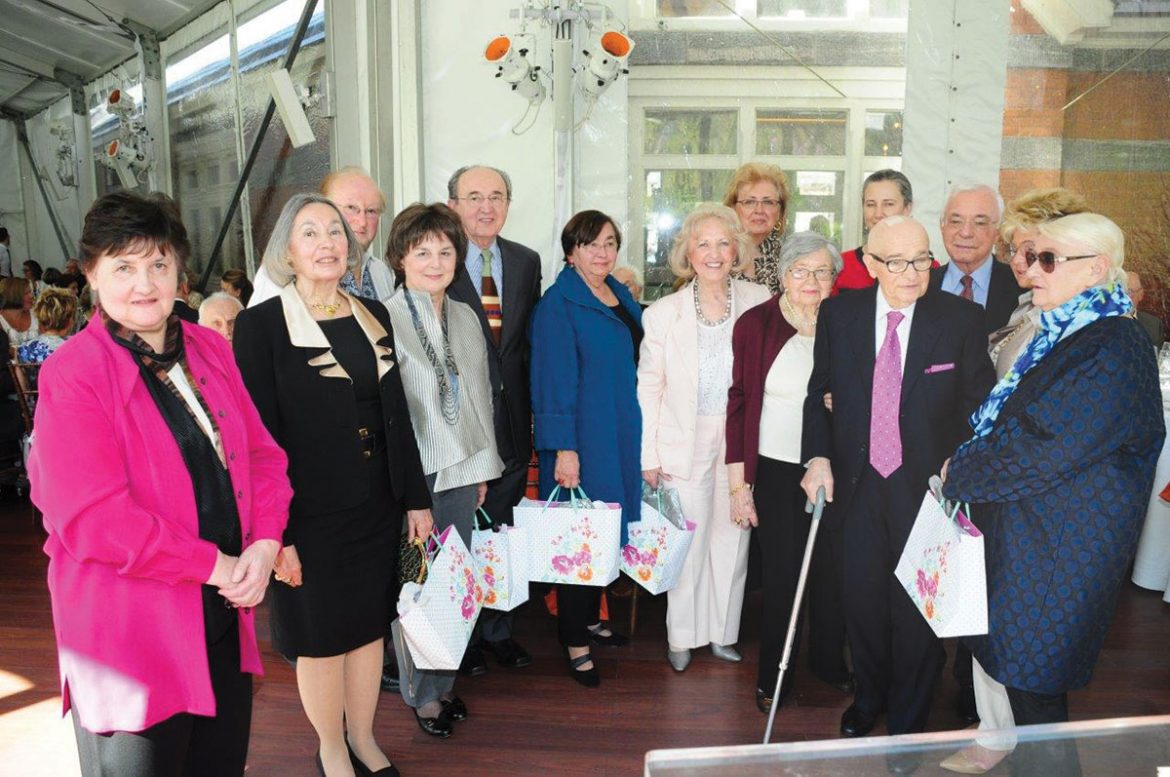 NEW YORK – Approximately 200 people attended the 40th anniversary banquet celebration for The Ukrainian Museum in New York on April 17 at the Tavern on the Green in Central Park.

They came to honor an institution that has served not only the Ukrainian community, but the arts community at large, with its high-quality and expansive exhibits and collections.

Among the honored guests were: Ambassador of Ukraine to the United Nations Volodymyr Yelchenko and his wife, Iryna; Consul General of Ukraine in New York Igor Sybiga and his wife, Natalia; Bohdan Kurczak, CEO, and Stefan Kaczaraj, chairman of the board, from SelfReliance New York Federal Credit Union; Marianna Zajac, president of the Ukrainian National Women’s League of America (and a vice-president of The Ukrainian Museum); and Treasurer Roma Lisovich from the Ukrainian National Association.

Following a cocktail reception, as guests found their seating assignments, the celebratory program was opened with a welcome to guests by Xenia Ferencevych, director of communications at The Storm King School, who served as mistress of ceremonies.

The Rev. Volodymyr Muzychka of St. Volodymyr Ukrainian Orthodox Cathedral in New York offered the invocation and led the gathering in singing “Our Father.”

The president of The Ukrainian Museum, Prof. Renata Holod, welcomed the guests and commented on the museum’s 40-year history and how the institution has evolved into a premier organization within the worldwide museum community. “The museum’s catalogue [holdings],” she said, “is among the top collections among professional museums.” Prof. Holod noted that the exhibit “Staging the Ukrainian Avant-Garde of the 1910s and 1920s” earned much acclaim from museum professionals, considering that the material had received very little exposure previously. “…New exhibitions and an expanding catalogue will attract professionals to work with The Ukrainian Museum,” she added.

For the future, Prof. Holod encouraged the museum to host global exhibitions that will attract new talent and financial bases.

Prof. Holod thanked the sponsors, members, donors and past presidents of The Ukrainian Museum for the work they have done and continue to do. It is amazing what the museum has been able to achieve in 40 years with such a limited but dedicated staff, she added. Prof. Holod also thanked the anniversary event’s sponsors. 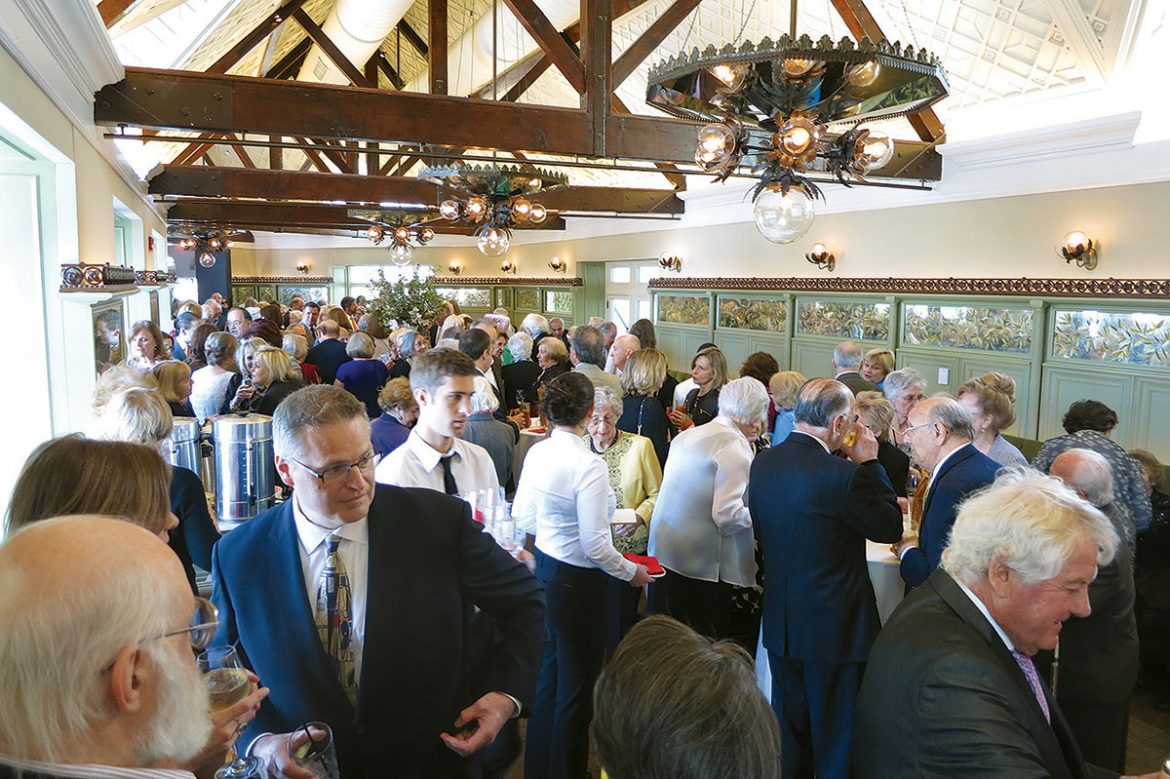 Guests mingle during the cocktail hour prior to the banquet.

Ambassador Yelchenko thanked the organizers of the 40th anniversary event and cited The Ukrainian Museum’s accomplishments. The museum, he said, is part of the fight in the defense of Ukrainian culture and art. Thanks are also due to the UNWLA and other organizations in the diaspora that continue to assist Ukraine, he added.

Ambassador Yelchenko noted that Ukrainians should be looking forward to the 100th anniversary of The Ukrainian Museum, and he passed along greetings from Ukraine’s Ambassador to the United States Valeriy Chaly.

Consul General Sybiga congratulated The Ukrainian Museum on its anniversary and underscored that, because of institutions such as the museum, Ukraine has been able to maintain its cultural traditions. Mr. Sybiga said: “We cannot forsake Ukraine’s future in America or in Ukraine. The museum can inspire the entire diaspora community as it has the women who have undertaken the work of 40 years for The Ukrainian Museum.”

Mr. Kurczak of the Self Reliance New York Federal Credit Union said, “The Ukrainian Museum is a beacon of light that shines from the Ukrainian community to the world, in addition to the New York community. The museum is the premier Ukrainian cultural institution in the diaspora.” He presented a check of $40,000 for the continuation of the museum’s valuable work.

Maria Shust, director of The Ukrainian Museum, acknowledged the generosity of individual donors and organizations, whose donations on the occasion of the anniversary event totaled more than $200,000. She also thanked all of the donors and sponsors of The Ukrainian Museum’s work over the 40 years of its activity, and acknowledged the support of the many individuals who had contributed to the growth of the institution, both financially and though hard work.

UNWLA President Zajac, in her greeting at the luncheon, spoke of the history of The Ukrainian Museum since its founding by the UNWLA 40 years ago in 1976. There has been a longtime partnership, Ms. Zajac underscored, between the UNWLA (founded in 1925) and the museum, whose roots may be traced to the 1933 World’s Fair exposition in Chicago that laid the foundations for what would later become The Ukrainian Museum.

Ms. Zajac announced her personal membership in The Ukrainian Museum’s 400K Club, which seeks to reach a goal of $400,000 over the next four consecutive years. Members are asked to donate $1,000 per year for four years.

Oksana Trytjak, a member of the board of trustees of The Ukrainian Museum, as well as chairperson of the event committee, explained more about the 400K Club program and encouraged those gathered for the anniversary celebration to become members with a donation. Prospective donors may contact the museum at 212-228-0110 or 40years@ukrainianmuseum.org. The Ukrainian Museum has 501 (c) (3) non-profit status, and donations are tax-deductible.

The banquet at Tavern on the Green was the kick-off for a yearlong celebration of events, both to celebrate achievements and to raise much-needed funds to help support and build a strong financial base for the museum’s operations and work. 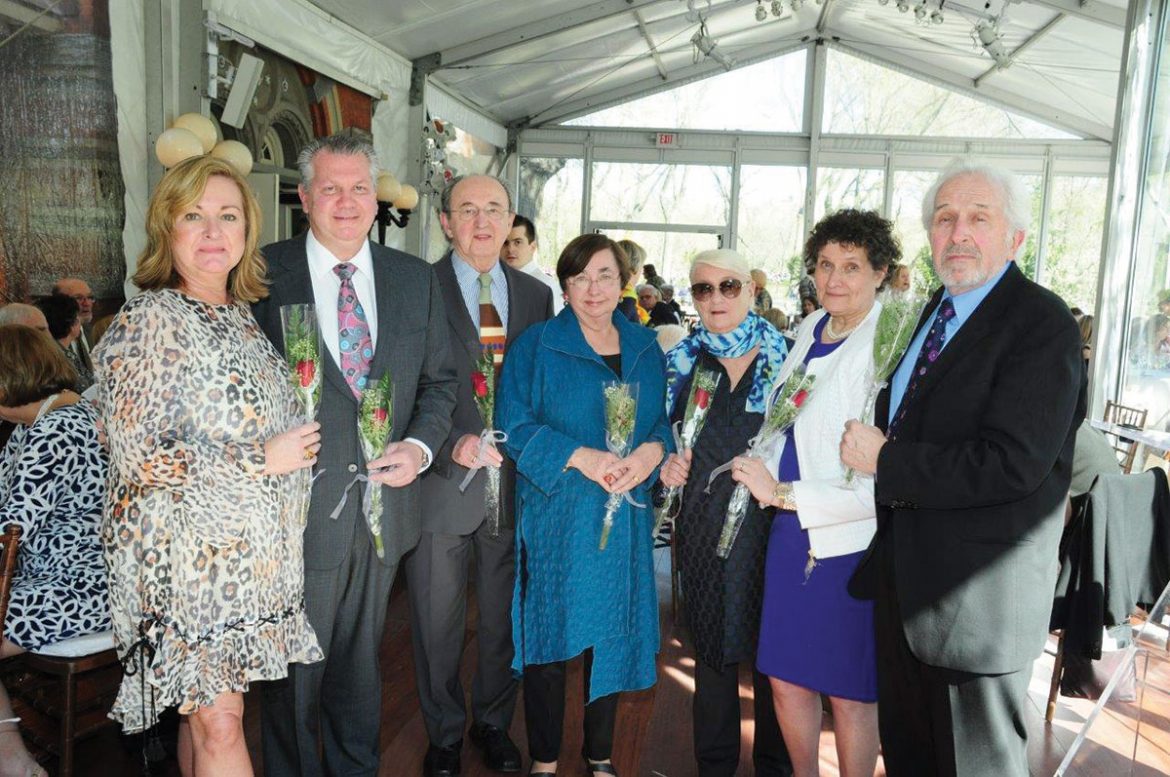 As stated in the commemorative program booklet:

“Over the years, city, state and federal funding agencies have supported the work of the museum. Agencies such as the New York City Department of Cultural Affairs, the New York State Council on the Arts and the Institute of Museum and Library Services have played an important role in helping the museum carry out its programming. However, the museum has always relied primarily on the financial support of the immediate and greater Ukrainian American community, its largest constituency.

“In its 40 years of operation, the museum has developed, matured, and become known as a pre-eminent Ukrainian cultural institution. Such recognition carries with it great responsibility – but also tremendous possibilities and incredible opportunities. With the wisdom gained from years of invaluable experience and the accomplishments of the past, and with the steadfast support from its members and friends, The Ukrainian Museum looks forward to building on its success and meeting the challenges of the future.”

Grant money from the aforementioned agencies is based on membership, among other determining criteria. That is why membership in The Ukrainian Museum is so important, museum officials often explain.

During the celebration, the gathering rose on at least three occasions to sing “Mnohaya Lita” (Many Years), wishing The Ukrainian Museum many more years of work in service to the community. A benediction was offered by the Rev. Muzychka to officially close the event.

The following message from New York Mayor Bill de Blasio was read by Xenia Ferencevych at The Ukrainian Museum’s 40th anniversary celebration on April 17 at Tavern on the Green in Central Park.

I am delighted to welcome you to The Ukrainian Museum’s 40th anniversary celebration.

New Yorkers are fortunate to have access to many acclaimed cultural institutions throughout the five boroughs. Founded in the East Village in 1976 by the Ukrainian National Women’s League of America, The Ukrainian Museum plays an important role in our city’s diverse artistic landscape. Through its multi-disciplinary exhibitions, concerts, educational workshops, lectures and film series, this wonderful institution preserves the rich heritage and folk art traditions of Ukraine and shares them with all New Yorkers. As you gather today to honor its milestone anniversary, I applaud the museum’s staff and supporters for their efforts to unite and empower Ukrainian New Yorkers and enhance the cultural vitality of our global city.

On behalf of the City of New York, congratulations on 40 excellent years and best wishes for continued success.