Eighty years – that’s the milestone we at The Ukrainian Weekly marked this year. It was on October 6, 1933, that The Weekly’s first issue rolled off the presses, and we celebrated the 80th anniversary of our newspaper’s birth with a special issue published on October 6, 2013. We hope you enjoyed that special issue as much as we truly enjoyed working on it. We were most pleased that we managed to find a photo of each and every editor of The Ukrainian Weekly from 1933 through the present day. The special issue also presented a look back at eight decades of news stories, features and editorials by offering a selection of such articles.

Major donation from Self Reliance (N.Y.)

Our sister publication, Svoboda, also marked an anniversary in 2013 – its 120th. The Weekly’s and Svoboda’s anniversaries were noted by Self Reliance (N.Y.) Federal Credit Union, which issued a check for $20,000 to the two newspapers as a donation in recognition of their combined 200 years of service to the Ukrainian community and nation. Interestingly, the check was issued on December 19, which just happened to be the feast day of St. Nicholas.

The accompanying letter from Bohdan Kurczak, president, and Bohdan Sawycky, chief financial officer, noted the two publications’ all-important contributions, especially Svoboda’s role as a “protectress (berehynia) of the Ukrainian heritage,” and wished the two newspapers much success and inspiration in continuing their mission.

As usual, the year included several special issues, beginning with “2012: The Year in Review” (published in three parts in January) and then our very popular “Ukrainian Debutante Balls” section – all the pages of which were published in color – that appeared on March 19. Next came our annual “A Ukrainian Summer” release, published as a 24-page pullout in the May 5 issue. (As has become tradition, “A Ukrainian Summer” appears in the first issue in May.)

Soon afterwards, Editor Matthew Dubas authored a special feature: a three-part series dubbed “On the road with the Ukrainian Bandurist Chorus” that he wrote while “embedded” with the UBC during its spring concert series. His articles (published May 12, 19 and 26) chronicled what it’s like – on and off the stage – to put on a tour of this caliber.

Meanwhile, in Kyiv, a former chief of our Kyiv Press Bureau, Zenon Zawada, is our principal correspondent in Ukraine, writing on a free-lance basis. He continues to do an outstanding job for us and our community in reporting from Kyiv. That has been especially notable as he files stories and analysis of developments related to the Euro-Maidan movement that began in late November.

The Weekly introduced a new column, “Border Crossings,” presenting a view from Ukrainian Canada that is written alternately by Jars Balan, chair of the Canada Ukraine Committee of the Ukrainian Canadian Congress, (UCC) and Taras Zalusky, the Ottawa-based executive director of the UCC. The first column appeared on May 5.

On September 8 we introduced another new columnist: Eugene Z. Stakhiv, Ph.D., a lecturer and researcher at Johns Hopkins University and visiting scholar at the Institute for Water Resources. Prior to his retirement from the U.S. Army Corps of Engineers, he served for 10 years as U.S. director, International Great Lakes Study; concurrently he was director of the UNESCO International Center for Integrated Water Resources Management. Dr. Stakhiv served as co-chair and lead author for the first three United Nations Intergovernmental Panels on Climate Change, for which he shares a Nobel Prize. The new column is called “Science and Technology Notes.”

2013 was also a year of awards. We began the year with a story in our February 17 issue reporting that Roma Hadzewycz had been presented a Special Recognition Award whose citation read: “With great appreciation for your support of Ukrainian American Veterans.” The award was announced at the UAV National Convention in November 2012, but the presentation took place later when Anna Krawczuk, a past national commander of the UAV and coordinator of the UAV Registration Project, and Bernard Krawczuk, public relations/publications officer, stopped by our editorial offices.

Our Toronto correspondent, Oksana Zakydalsky, was one of seven Ukrainian Canadians honored on September 26 with the Queen Elizabeth II Diamond Jubilee Medal, a Canadian government award that honors significant contributions and achievements by Canadians. Ms. Zakydalsky was recognized for her work with the Ukrainian Canadian Research and Documentation Center; her more than 20 years as a writer and correspondent for The Ukrainian Weekly, Homin Ukrainy, Svoboda and the New Pathway; and her leadership in Plast Ukrainian Youth Organization, both in Canada and on the international level.

Later in the year, Ms. Hadzewycz was honored by being named the Ukrainian of Year 2013 by the Ukrainian Technological Society, a professionals’ group based in Pittsburgh. The presentation was made at the UTS’s 44th annual award ceremony and dinner-dance on November 2. The award was given in recognition of: “professional excellence in journalism and reporting; dedication and editorial leadership of the Ukrainian community’s foremost newspapers: The Ukrainian Weekly, this year celebrating its 80th anniversary, and Svoboda, celebrating its 120th anniversary; editorial contributions to four books released by The Ukrainian Weekly on the Great Famine in Ukraine, the 10th anniversary of Ukraine’s independence and other significant news developments; and commitment and leadership on both the local and national levels of the Ukrainian National Association (UNA) and Plast; as well as longstanding efforts to strengthen ties between Ukraine and the U.S.”

In her acceptance address Ms. Hadzewycz spoke about the profound influence that her family’s active involvement with the Ukrainian National Association and Plast Ukrainian Scouting Organization had on her life and career; shared highlights from the intertwined history of the UNA and Svoboda; and underscored the role of The Ukrainian Weekly in our community.

To be or not to be digital

In March 2013, the announcement was made of plans to change The Weekly to a new digital format. Letters went out to all subscribers, and the response rate was very good: over 31 percent responded with e-mail addresses, but more than 7 percent replied that they had no e-mail address. Others did not reply at all. Quite a few (some speaking for their elderly parents) said this was discrimination against older readers who do not use computers, the Internet, e-mail, etc.

Some readers were absolutely against the digital only version; others thought the digital version would, of course, be free. Some readers actually gave us their e-mail addresses and said “put me on your e-mail distribution list,” expecting that they would thenceforth get a free Weekly each week via e-mail. We found ourselves fielding a variety of questions about The Weekly’s (and even Svoboda’s) future. There were even questions about whether readers should renew or not, since we were supposedly ending our print edition.

UNA Treasurer Roma Lisovich wrote in April that the cost to print and deliver the newspaper to our readers was approximately $110 annually per subscriber, adding that the UNA would have to raise the print subscription price to $100 for members and $125 for non-members. “We are sympathetic to the financial hardship that this may cause some readers. We hope our loyal readership will recognize that the price increase barely covers the per-subscriber cost it takes to produce The Weekly,” she noted.

In the end, the decision was made to continue the print edition, and to continue promoting online subscriptions (which, we must note, obviates concerns about poor postal delivery). However, the price for annual subscriptions had to be raised as of the new year to offset rising costs (including the new postage rates that are to go into effect in late January 2014) and declining revenue (due to decreases in income from advertising and subscriptions). However, we hasten to add, that this does not mean that The Weekly will not go digital at some point in the future.

(See the announcement about new pricing on right.)

For many years, The Ukrainian Weekly provided members of the Senate and House of Representatives with gratis subscriptions to our newspaper. The thinking was that The Weekly is useful and informative, as it covers developments in Ukraine, the life of the Ukrainian American community and issues of concern to their constituents. However, due to financial considerations, exacerbated by the poor delivery of our newspaper by the U.S. Postal Service, in March 2013, we stopped mailing members of Congress copies of our newspaper.

The good news is that we are now offering their offices free access to The Ukrainian Weekly via a PDF file of each week’s issue e-mailed by the Ukrainian National Information Service, the Washington office of the Ukrainian Congress Committee of America. Our sincere thanks go out to Michael Sawkiw Jr., who agreed to this proposal and has been sending out these PDFs of our newspaper to his congressional e-mail list beginning with The Weekly issue dated November 17. The primary recipients of these e-mailings are members of the Congressional Ukrainian Caucus and their staffs, plus staffers in the House Foreign Affairs and Senate Foreign Relations committees – more than 35 recipients in all.

To conclude, some numbers 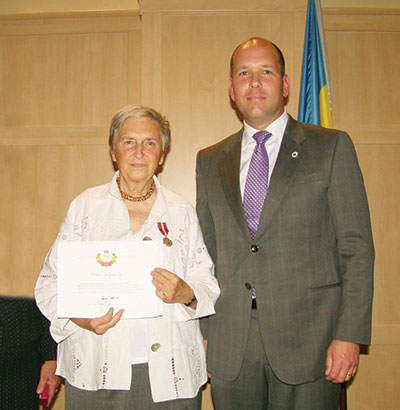 The Weekly’s Toronto correspondent, Oksana Zakydalsky, was honored on with the Queen Elizabeth II Diamond Jubilee Medal, which was bestowed by the Canadian government and presented on September 26 by Ukrainian Canadian Congress President Paul Grod.

As of December 31, 2013, our Facebook page had 1,430 likes. (We had inaugurated our Facebook page in July 2012, and at the end of 2012 we had 510 likes.) For those who may not be familiar with it, our Facebook page includes breaking news, shares of major news stories and features on Ukraine and Ukrainians, previews of what’s coming up in our issues and notifications that the latest issue is out, available for subscribers to our online edition and on its way via regular mail to print subscribers. So, why not LIKE us? See https://www.facebook.com/TheUkrainianWeekly.

This year’s edition of “The Year in Review” was prepared by Roma Hadzewycz and Matthew Dubas of The Weekly’s editorial staff; our part-time staffer Christine Syzonenko; our colleagues Deanna Yurchuk and Lesia Lebed; our correspondents Yaro Bihun in Washington and Oksana Zakydalsky in Toronto; and Ihor Stelmach, our sports columnist. Credit for the layout goes to our layout artist Stepan Slutsky.

The articles in this year’s four-part yearender (January 12, 19 and 26, and February 2) were prepared based on stories about events of 2013 that appeared in The Weekly – those written by our staffers and regular correspondents, as well as many submitted by community activists from cities and towns across North America. Thank you, thank you, thank you to all of these community-minded individuals. Let’s keep up our partnership!

Incidentally, our editorial of June 23, 2013, was addressed to readers in an effort to improve cooperation between them and us; it includes some friendly advice on how to submit materials to The Weekly and is a good guide for anyone who wants to send us stories, information, photos, etc.

As we bring to a close our “2013: The Year in Review,” our parting message is: we look forward to working with all of you in 2014 and beyond.