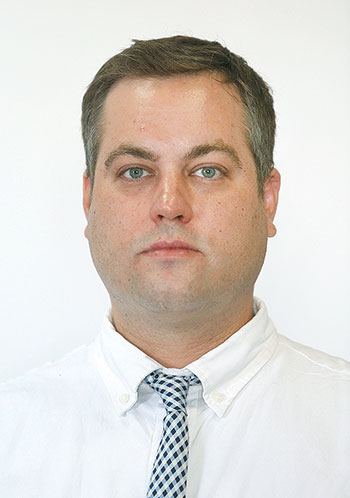 A Ukrainian American, Mr. Raczkiewycz has 10 years of journalism experience in Eastern Europe. Most recently he was the editor-at-large of the English-language weekly Kyiv Post, where he wrote more than 500 articles and was the co-winner of the 2014 Missouri Honor Medal “for superior journalism throughout the publication’s history.”

In June of this year he received an honorable mention for best feature at the Catholic Press Awards in St. Louis, Mo., for an article about the Ukrainian families displaced by war that appeared in One, a multimedia magazine published by the papal agency Catholic Near East Welfare Association (CNEWA).

Mr. Raczkiewycz is a native Chicagoan who was born and raised in the city’s Ukrainian Village neighborhood. He is a graduate of St. Norbert College in Wisconsin, majoring in international business and language area studies in Russian. He served as a U.S. Peace Corps volunteer in 2002-2005 in Ivano-Frankivsk, Ukraine.

Mr. Raczkiewycz replaces Zenon Zawada, who was The Weekly’s main free-lance correspondent in Kyiv since July 2014.

Mr. Zawada joined The Weekly staff at the time the paper had a full-time Kyiv Press Bureau; he was the bureau chief in February 2005-December 2007 and again in September 2008-June 2011. In December 2011 he rejoined The Weekly as Kyiv correspondent, serving in that capacity until July 2014, when he became a free-lancer.

Since October 2012, Mr. Zawada has been a political analyst and editor at Concorde Capital.