The Very Rev. Archpriest John Michael Fields of Frackville, Pa., entered into eternity on Friday, November 27. The son of the late John “Jack” Fields and Olga Uhryn Fields, John was born on February 19, 1950, in Butler Township, Pa., and is survived by his sister Diane M. Berkheiser and her husband Dennis, and sister MaryAnn Fields-Whyne; nephew Keith John Berkheiser and his wife Shawn, niece Kristen A. Berkheiser, niece Katharine A. Whyne and her husband Chris, and niece Maria A. Whyne; great-niece Caroline G. Berkheiser and great-nephew Wyatt “Jack” Berkheiser. 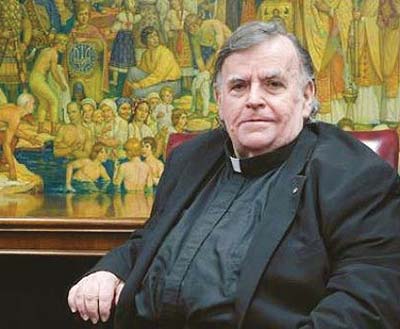 Years later he entered St. Josaphat’s Ukrainian Catholic Seminary in Washington, D.C., to begin his pursuit of religious studies. During this time, he entered The Catholic University of America in Washington, where he obtained his master’s degree of Sacred Theology from the university’s School of Theology and Religious Studies in 1986. During that year, he also completed coursework from The Catholic University’s School of Canon Law, later earning his doctorate of canon law.

On April 4, 1985, the Rev. Fields was ordained to the diaconate at the Immaculate Conception Ukrainian Catholic Cathedral in Philadelphia by Metropolitan-Archbishop Stephen Sulyk. A year later, on May 11, 1986, Deacon John was ordained to the holy priesthood also in Philadelphia. On May 17, 1998, Archbishop Sulyk conferred upon the Rev. Fields the honor and title of protopresbyter, or archpriest, for his dedicated work in the priesthood.

The Rev. Fields served in various and numerous ministries within the Ukrainian Catholic Archeparchy. Over the years, he was assistant editor, and later editor of “The Way,” the official newspaper of the Ukrainian Archeparchy, member of the Archeparchial Insurance Department, assistant finance officer, member of the board of directors of the Pennsylvania Catholic Conference of Bishops, spiritual director of the Holy Name Society in the South Anthracite Council, member of the presbyteral council, president of the Priests’ Beneficial Fund, member of the Archeparchial Corporate Board, protopresbyter of the South Anthracite Protopresbyterate, director of Ascension Manor Nursing Facility in Philadelphia and vice-chancellor of the archeparchy.

His civil involvement and achievements were likewise numerous and varied. The Rev. Fields was a member and past grand-knight of the Frackville Knights of Columbus, a member of Frackville Rotary, member of Frackville Centennial Committee, previous member of the North Schuylkill School Board, during which he was instrumental in building the junior and senior high school in Fountain Springs. He was also an active member of the Schuylkill County and Pennsylvania Bar Associations, former partner of Thomas and Fields Law Office in Frackville, instructor of religious studies at Cardinal Brennan Jr./Sr. High School in Fountain Springs, and participant in the recent Moderna COVID-19 vaccine trial being conducted by the University of Pennsylvania in Philadelphia. The Rev. Fields was active in numerous other projects to benefit both the Borough of Frackville and Schuylkill County.

But he also sought also to enjoy life and thoroughly enjoyed all things Disney, was an avid political spectator, possessed a particular love of firework displays, and sharing his love and knowledge with his family, community and peers. His loss is tremendous to all who knew him.

In his communique to the archeparchy on Friday, Metropolitan-Archbishop Borys Gudziak regretfully informed the bishops, clergy, religious and faithful that the Rev. Fields passed away peacefully in his home. Metropolitan-Archbishop Borys called him “an ardent American and a proud carrier of the legacy of his Pennsylvania coal-mining homeland.” He remained “hopeful” about the future: the future of the church, of the United States and of his ability to help make a better future for us all.

Following the funeral liturgy, interment was held at the parish cemetery. His family request in lieu of flowers or other offerings that donations be made in his name to the St. Josaphat Seminary Endowment Fund, c/o Archbishop’s Chancery, 810 North Franklin Street, Philadelphia, PA 19123, as he was dedicated to academics and study for those wishing to enter the priesthood.