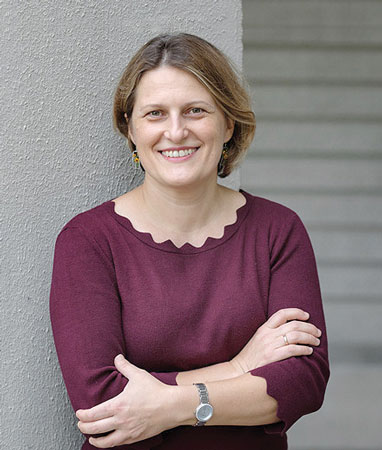 Academia’s activity for 2020 was abbreviated when compared to its usual schedule of conferences, presentations, lectures, film screenings, etc. Many events moved online, while others had to be postponed or cancelled.

Columbia University’s Ukrainian Studies Program at the Harriman Institute had eight course offerings in the spring semester, focusing on Ukrainian history, political science, literature, language and visual arts. The university offered these courses: Oksana Vynnyk’s “Topics in Modern Ukrainian History” and “Urban Modernity on the Ukrainian Lands: Cities in the 19th and 20th Centuries;” Mark Andryczyk’s “The Aura of Soviet Ukrainian Modernism”; Ambassador Valeriy Kuchynskyi’s “Today’s Ukraine: Power Politics and Diplomacy”; and Yuri Shevchuk’s Ukrainian language instruction (in three levels of proficiency). Olena Martynyuk, the Peter Jacyk Postdoctoral Fellow in Ukrainian Studies at the Harriman Institute for 2019-2021, taught “Periphery and Its Empires: Ukrainian and Russian Art from Peter the Great to the Present.”

Online events during the fall term included: “Soviet Ukrainian Urbanism: Factories, Higher Education and Nationalities Policy in Kharkiv” with Dr. Dobczansky (September 24); “Between Serialism and Suprematism: Nikolai Roslavets’ Modernist Music” with Dr. Batstone (October 22); and “Dealing with a Contested Past: ‘Monument Wars’ in Ukraine and the U.S.A.” by Valentyna Kharkhun and Dr. Andryczyk. The Ukrainian Film Club screened “The Lost Petition” by Borys Ivchenko on September 23.

The American Association for Ukrainian Studies (AAUS) in April wrote an open letter to President Volodymyr Zelenskyy, Prime Minister Denys Shmyhal, Minister of Finance Serhii Marchenko, Minister of Foreign Affairs Dmytro Kuleba and interim Minister of Culture Svitlana Fomenko to protest budget cuts to scholarly and cultural institutions in Ukraine. The AAUS warned that the budget cuts would lead to “the collapse of [cultural and scholarly institutions and their] activities in Ukraine and abroad, with devastating consequences for Ukraine’s ability to defend itself against the many global threats it faces today.” The letter stressed the importance of culture, education, the arts and sciences and underscored that they remain key to the global recognition of a country’s sovereignty, defend a country against foreign aggression and mobilize international support.

Ukraine’s government, after 30 years of independence, had begun to promote Ukrainian culture, history, language and scholarship in Ukraine and abroad, the AAUS noted. This work must continue to promote an image of Ukraine as a country that deserves respect and fascination for its cultural riches and scholarly traditions. Appealing to the government, the letter urged a reversal of the decision to cut the budgets of those cultural institutions and to work with their leaders to determine reasonable reductions with the goal of preserving as many vital projects as is possible.

The Ukrainian Free University Foundation (UFUF) celebrated the 45th anniversary of its founding on October 20, 1975. An article by the foundation’s president, Askold Lozynskyj, informed readers that the Ukrainian Free University in Munich, Germany, had been forced to purchase its own facility as a condition of accreditation by the West German government. Much of the funding initially came from Archbishop Major and Cardinal Josyf Slipyj, but the Ukrainian community needed to mobilize funds to preserve a higher education facility beyond the borders of Ukraine. The UFU was founded in Vienna in January 1921, and financial aid and scholarships were available to students. The university later served as the initiator of numerous projects involving Ukrainian students and education in Ukrainian studies.

Mr. Lozynskyj also highlighted the relationships between UFU and universities in Ukraine, including Ivan Franko University in Lviv and Taras Shevchenko National University of Kyiv, and underlined that the UFUF was instrumental in making these collaborations possible. The foundation was also a key player in increasing awareness of the Holodomor of 1932-1933, the Lemko forced relocation known as Akcja Wisla and other events throughout Ukrainian history.

The Western Canada Branch of the Shevchenko Scientific Society of Canada (NTSh) launched the latest volume of the Zakhidniokanadskyi Zbirnyk (Western Canadian Collection) on July 18. The collection celebrated 125 years of Ukrainian settlement in Canada, and the launch featured an online lecture by Dr. Iuliia Kysla about the collection. Based in Edmonton, Alberta, the Western Canada Branch of NTSh noted that the latest volume (Volume 8) was dedicated to the memory of Petro Savaryn, a longtime member and head of the NTSh branch in Edmonton, and a prominent figure of the Ukrainian community in Canada and beyond.

The Ukrainian Catholic University announced in October a partnership for joint research projects with Facebook Reality Labs (FRL) to involve teachers, students and graduates of the university’s Applied Science Faculty. Yaroslava Lochman, a graduate student in UCU’s master’s program in data sciences, received a research grant from UCU’s machine learning laboratory with a six-month internship at FRL in Pittsburgh. The research was coordinated with James Pritts of FRL and two teachers of the faculty, Rostyslav Hryniv and Oles Dobosevych, with an oral presentation scheduled for the Workshop on Applications of Computer Vision 2021. Another UCU graduate student, Kostya Liepieshov, was working to develop methods for simultaneous correction of geometric symbols on images and the autocalibration of cameras.

Polina Lishko, Ph.D., a Ukrainian-born physiologist and associate professor of molecular and cell biology at the University of California at Berkeley, was awarded the 2020 MacArthur “genius” award for her development of promising new non-hormonal contraceptives for women and research that could lead to male or unisex contraceptives. The award, announced on October 6, came with a $625,000 grant over five years. Dr. Lishko has launched YourChoice Therapeutics, but has since left the start-up to focus on her research. In receiving the award, the scholar said it showed recognition of the importance of the field of reproductive physiology, after years of constant rejection in seeking federal funding. Dr. Lishko is also an adjunct professor at the Buck Institute’s Center for Reproductive Longevity and Equality in Novato, Calif., studying ovarian aging and its impact on women’s health. 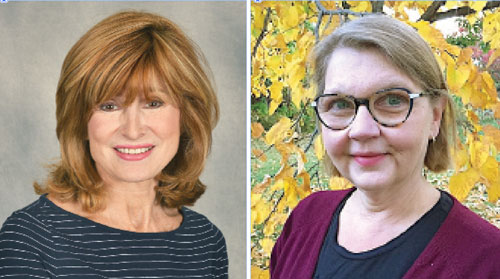 Dr. Susan Kenny (on the left) and Natalia Onyschuk were announced in November as winners of the Holodomor Research and Education Consortium’s Educator Award for Holodomor Lesson Plan Development.

Dr. Susan Kenny of Washington Township, N.J., and Natalia Onyschuk of Edmonton, Alberta, were named in November as winners of the 2020 Holodomor Research and Education Consortium’s Educator Award for Holodomor Lesson Plan Development. A project of the Canadian Institute of Ukrainian Studies, University of Alberta, the award recognizes outstanding educators in the field of Holodomor teaching. The award fosters excellence in the development of innovative, creative and interactive lessons for grades K-12 that develop students’ critical thinking skills while addressing the topic of the genocide in Ukraine in the early 1930s. Dr. Kenney’s winning lesson plan for Grades 11 and 12, “Imperial Famines: America’s Response to the Holodomor,” strove to reinforce global responsibility as it relates to the Holodomor. Ms. Onyschuk’s lesson, “Teaching the Holodomor through Music – The Song ‘Dry Tears,’ ” was aimed at children and incorporated music to teach about the Holodomor.
The U.S. Holodomor Committee, in partnership with the National Council of Social Studies, hosted the webinar “Stalin’s Cover-Up of the Ukrainian Famine Genocide, 1932-1933: The Original Fake News” on September 17. Speakers included Dorys Duzyj of Michigan, Dr. Christopher Mauriello of Massachusetts and Michael Sawkiw Jr. of Washington. The webinar was posted to the NCSS website and was to be released on the U.S. Holodomor Committee website (www.ukraingenocide.com) with lesson plans for educator access. An additional webinar was hosted on October 2 on the “Power of Community,” and future plans announced included a virtual ceremony for the fifth anniversary of the Holodomor Monument in Washington (scheduled for November 7), food pantry donations in November, promotion of Holodomor curricula in high schools across the U.S., efforts to revoke Walter Duranty’s Pulitzer Prize, the creation of a descendants’ network of Holodomor survivors and their offspring, and heightened awareness of the sale of Soviet memorabilia and products on the Internet.

Manor College in Jenkintown, Pa., hosted a Virtual Ukrainian Dialogue on October 15 to discuss “Zelenskyy’s First Year Leading up to America’s Presidential Election.” Panelists included: Ambassador of Ukraine to the U.S. Volodymyr Yelchenko, National Deputy Solomiia Bobrivska of Ukraine’s Verkhovna Rada and Brian Bonner, chief editor of the Kyiv Post. A Ukraine-themed discussion is hosted by Manor College twice a year. Topics have included women in politics in Ukraine; Russian aggression in the Kerch Strait; hacking and the New Russia; and moving beyond the Minsk process and ending Russia’s war in Ukraine. 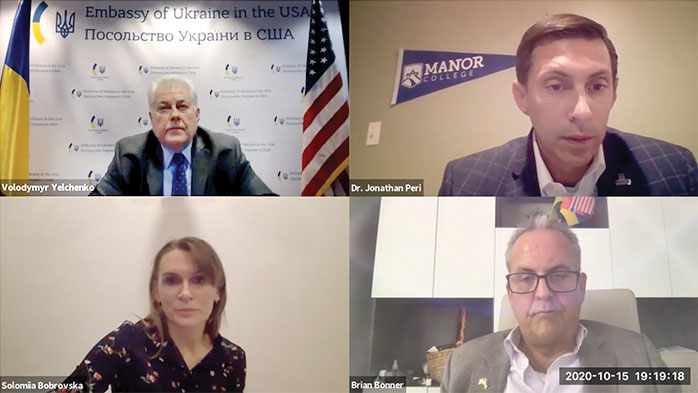 Panelists on October 15 discuss President Volodymyr Zelenskyy’s first year in office in the lead-up to the U.S. presidential election during a dialogue hosted by Manor College in Jenkintown, Pa.

Prof. Andryczyk, who manages the Ukrainian Studies Program at the Harriman Institute of Columbia University, was featured in December in an in-depth interview by Mariia Shuvalova about Ukrainian literature as a field of study and classroom challenges, especially as regards teaching the subject to Western English-speaking audiences. Prof. Andryczyk also spoke about his translations of Ukrainian literary works. His latest work is “The White Chalk of Days: The Contemporary Ukrainian Literature Series Anthology,” that features poetry, fiction and essays by 15 of the most prominent writers in Ukraine in the past 50 years.
Also in December, The Weekly carried news that the Ukrainian Catholic University was top rated among institutions of higher education in Ukraine in the field of information technology (IT). The rating released by DOU (developers.org.ua), a community of Ukrainian programmers, gave special praise to UCU’s Applied Sciences Faculty. UCU headed the list of 82 institutions of higher education in Ukraine. In 2019, UCU had shared first place with the National University of Kyiv-Mohyla Academy.