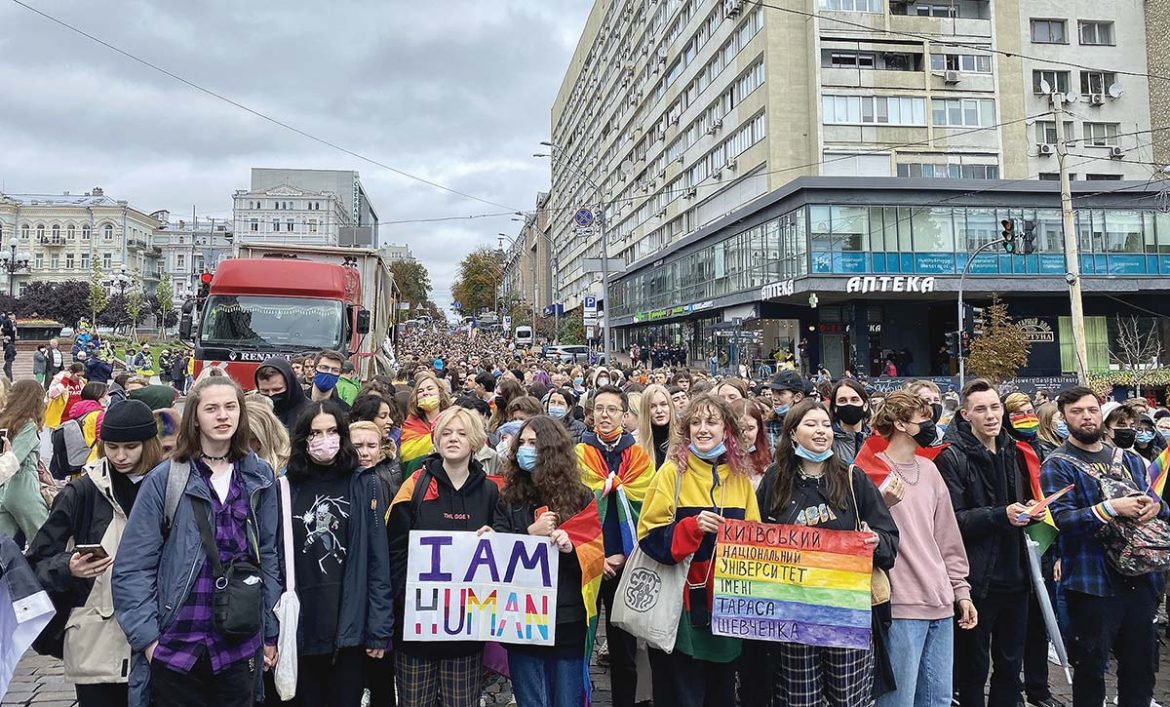 Some 7,000 people took part in Kyiv’s 10th annual gay pride parade. They marched down the city’s central streets to demand equality for members of the country’s LGBT community.

KYIV – Some 7,000 supporters of LGBT rights marched peacefully on September 19 in Ukraine’s capital in what was this city’s 10th gay pride parade. Organizers of the march said that, as opposed to previous pride parades that did incur violence, this year’s march was peaceful with only a handful of minor provocations.

This was also the first time that organizers of the march expressed demands on the Ukrainian government. Those demands, published in a manifesto signed by 15 non-governmental organizations, asked the Ukrainian government to adopt a bill to combat discrimination and create a procedure for holding people who commit crimes motivated by homophobia, transphobia and other forms of intolerance legally liable.

“This is the 10th pride parade,” said Leni Emson, director of KyivPride, a Ukrainian non-governmental organization founded in 2016 to promote awareness of different issues affecting the lesbian, gay, bisexual and transgender (LBGT) community here. “The parade was successful. It was calm.”

Organizers of the parade also thanked police for “the opportunity to hold a safe march.” 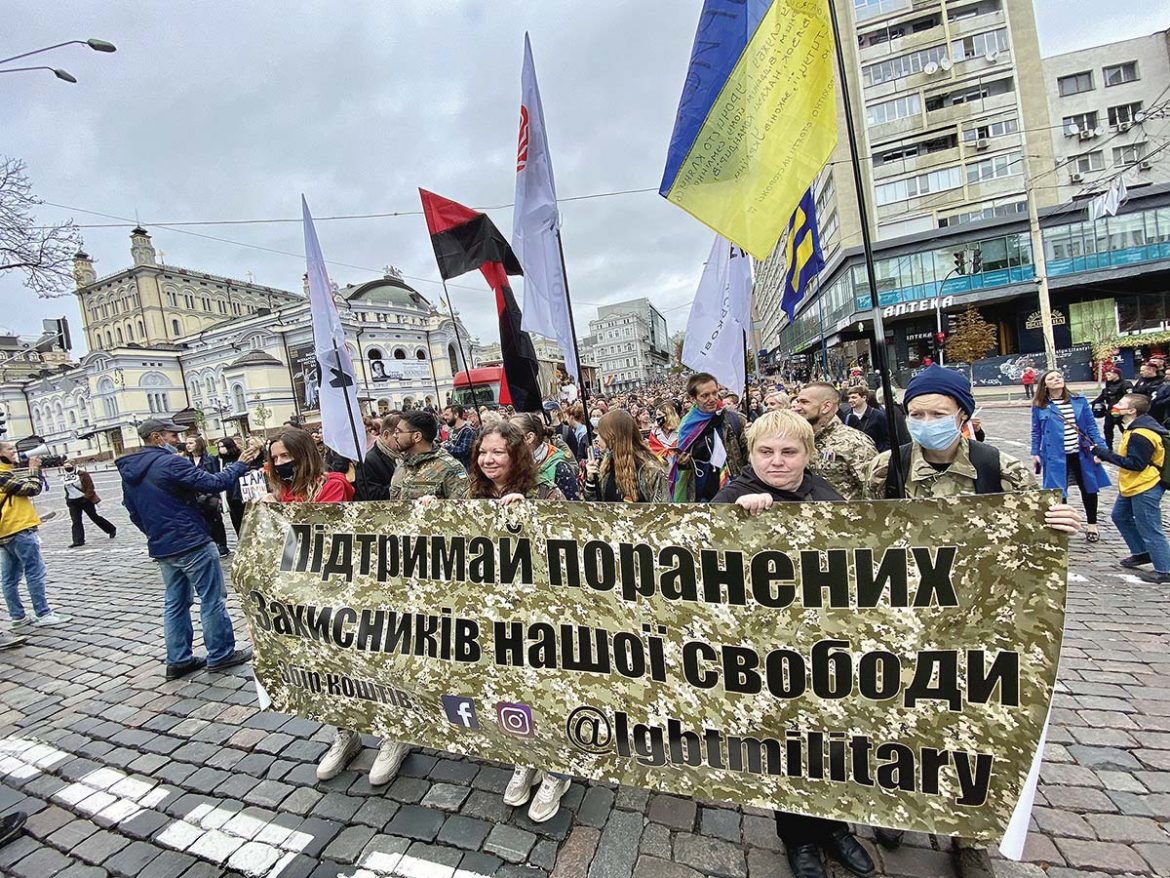 March participants moved through the city center accom­panied by music. Many held signs supporting LGBT rights and demanding rights for same sex marriage, as well as raising awareness of issues of safety and better sex education.

The organizers did not disclose the exact route and place of the march so as not to endanger the participants who in previous years encountered violence and provocations.

KyivPride volunteers helped participants leave the venue safely, and, in particular, they asked individuals to remove or hide any symbols from the march.  The safety measures included asking people to remove any gay pride identifiable makeup, and, if possible, to change clothes.

Melinda Simmons, the United Kingdom’s ambassador to Ukraine, attended the Kyiv pride parade together with other members of the British Embassy in Ukraine.

“I think that Ukraine’s progress in achieving equality is a journey. It is in development. That is why I am excited to be here. Because it is really important to support it,” Ms. Simmons told The Ukrainian Weekly.

“It is hugely positive to see this community here, but it is small. So, I think that for all of us whose countries have also been on that journey it is essential to be here,” Ms. Simmons said.

“The United Kingdom’s government supports Ukraine on this journey. First of all, we are here because we support this movement. We also provide financial support, particularly in training for people to stay competent in what they do. I believe that one of the most important things that we can do is support Ukrainians vocally in what they stand for,” Ms. Simmons told The Weekly. 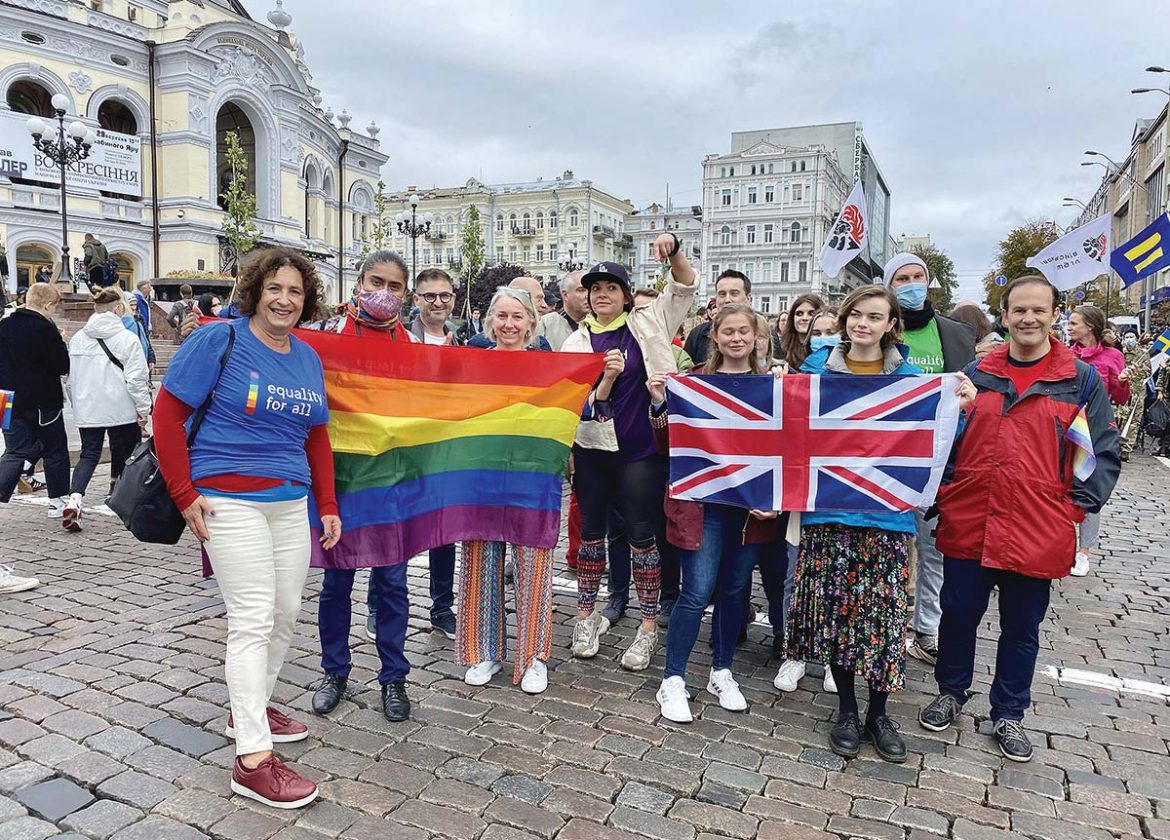 “I am here because I support Ukraine on its way to diversity and equality. It has very good progress. This community inspires me. It is well organized here. Kyiv pride became more normal in recent years, and I am happy about it,” Mr. Maasikas told The Weekly.

The platform released by KyivPride included the headline “A country for everyone. Laws for life. State for security.”

The first of eight demands in that platform asks that Ukraine’s parliament adopt bill No. 5488 during the Verkhovna Rada’s fall session.  That bill would help Ukraine combat discrimination and regulate liability for crimes motivated by homophobia, transphobia and other forms of intolerance.

KyivPride also asked the government to continue enacting law enforcement reforms that would affect the police, the prosecutor’s office and the judiciary. Those reforms would better help prosecutors investigate crimes motivated by intolerance.

Among other demands, KyivPride also asked the government to find a balanced legislative solution that would give citizens the right to free speech while also barring hate speech and calls for discrimination and violence in public.  They also asked that the government intensify efforts to recognize civil partnerships between same sex couples in Ukraine and raise awareness in the country’s healthcare system of the mental, sexual and reproductive health of people in the country’s LGBT community.

“We call on parliamentary and non-parliamentary political parties, various socio-political forces and leaders of public opinion to support the demands of KyivPride-2021, actively promote each of the items of the manifesto and work together with LGBT+ communities so that during the next parade in 2022 together we could state the progress of Ukraine on the way to full civil equality of all our fellow citizens,” KyivPride officials said in a statement.

Because individuals who are part of the LBGT community in Ukraine face intolerance and violence, the annual gay pride march is often the only opportunity when people in this demographic group can hold hands with their partner in public.

Members of the LGBT community were also supported by a group of veterans of the Russia-Ukraine war who also marched in this year’s parade.

Viktor Pylypenko, head of the group Ukrainian Military-LGBT for Equal Rights, told The Weekly that the organization took part in the previous two Kyiv pride parades because discrimination against gay individuals is also an issue in the military.

“In my opinion, the biggest problem for the LGBT+ military is the lack of the right to legalize marriages for LGBT+ people. Boys and girls risk their lives at the front, lose their health, become disabled and their children and civilian partners remain vulnerable. At the same time, heterosexual military partners have full preferences and benefits from the state, meanwhile LGBT+ people still do not have this protection from the state,” Mr. Pylypenko said.

“We need to raise awareness of both the community and our problems. We also carry out educational work, arguing that equality is needed for the LGBT+ community and other discriminated communities. Thus, social change needs to take place, and that entails legislative changes. Deputies will no longer be so afraid to support this agenda if we demand our rights more loudly,” Mr. Pylypenko said.

Daryna Mizina, an activist with Amnesty International Ukraine, said the most crucial criterion for progress in the context of the pride march and the rights of LGBT people in Ukraine was the level of security and the absence of violence during the event.

This year, according to the organizers, the march took place without violence, though participants in previous parades did encounter widespread violence both during and after the event.

“Although I don’t want people to think that everything is finally good, because outside the LGBT+ march there is a constant threat of violence from hate groups, and investigations into these attacks very rarely conclude that these instances are hate crimes. Moreover, they very rarely come to a logical conclusion with the perpetrators being brought to justice,” Ms. Mizina said.

“In my opinion, in the coming years, the main focus in the field of human rights in Ukraine should be the ratification of the Istanbul Convention to Combat Domestic Violence and Violence against Women, as well as the improvement of legislation to protect people from hate crimes,” Ms. Mizina said. “These things come to mind first, but I want the Ukrainian authorities and society to choose a more general, but even more important, goal: to protect the rights of everyone, at all levels and in all manifestations.”

But there are also indications that the situation is improving in Ukraine.

“The main positive change I see is the growth of consciousness in Ukrainian society, which, in particular, is manifested in the growing number of people who take part in marches for equality, for women’s rights, protection of animals, climate and more. But we still have to fight for rights because we are still at a fragile point where any step back will mean leveling the efforts that have been made for decades,” Ms. Mizina said.