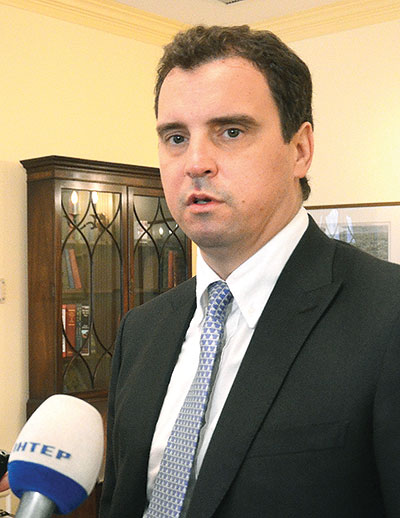 WASHINGTON – Three top Ukrainian government officials in charge of improving their country’s economy and its international economic relations spent four days in Washington in mid-April, meeting with leaders of the International Bank for Reconstruction and Development, the International Finance Corporation, the World Bank, and the International Monetary Fund, as well as officials at the U.S. Department of Commerce, to discuss Ukraine’s current financial-economic situation, its progress in reforming the economy and plans for additional reforms in the future.

And, as Ukrainian Economy Minister Aivaras Abromavicius noted at the conclusion of the visit, they were returning to Kyiv satisfied with the results. “Ukraine is high on everybody’s agenda these days,” he told members of the press at the Embassy of Ukraine on April 20.

“There is a clear support for our government and our Parliament in Washington among the American politicians, businesspeople and bankers, and also among the international community,” he said, noting that “it is very obvious that everyone wishes us success and understands our difficult situations on the security and economic fronts.”

Minister Abromavicius was accompanied to the Washington meetings by Finance Minister Natalie Jaresko and the governor of the National Bank of Ukraine, Valeriya Hontaryeva.

Among the issues they discussed here were the sanctions put in place when Ukraine was not yet a market economy and was getting gas at a very cheap price from Russia. “This is no longer the case,” Mr. Abromavicius said. “We buy gas at a higher price than the average in Europe, and Ukraine now has a status of being a market economy.”

“We agreed that the first step is the suspension of sanctions, and then to work on removing them all together,” he added.

They also met with the chief economist of the World Bank responsible for determining the business ratings assigned to Ukraine and discussed what needs to be done to raise its current low rating before the cut-off date on June 1.

Mr. Abromavicius said he also had a meeting with the U.S. trade representative at the Department of Commerce, and that they agreed to hold a U.S.-Ukraine conference on trade and investment in May in Kyiv and a business summit – with government and business representatives participating – in mid-July in Washington.

He noted that many American companies are interested in certain assets in Ukraine if privatization takes place. They include agricultural, engineering and defense companies, among others.

“We certainly have friends here in the U.S., very supportive, acknowledging the early progress of the reforms. And we certainly want to continue working in that direction, so that both the Ukrainian people and the Ukrainian business community, as well as the international community really starts to believe that Ukraine is a partner that they can trust,” he said.