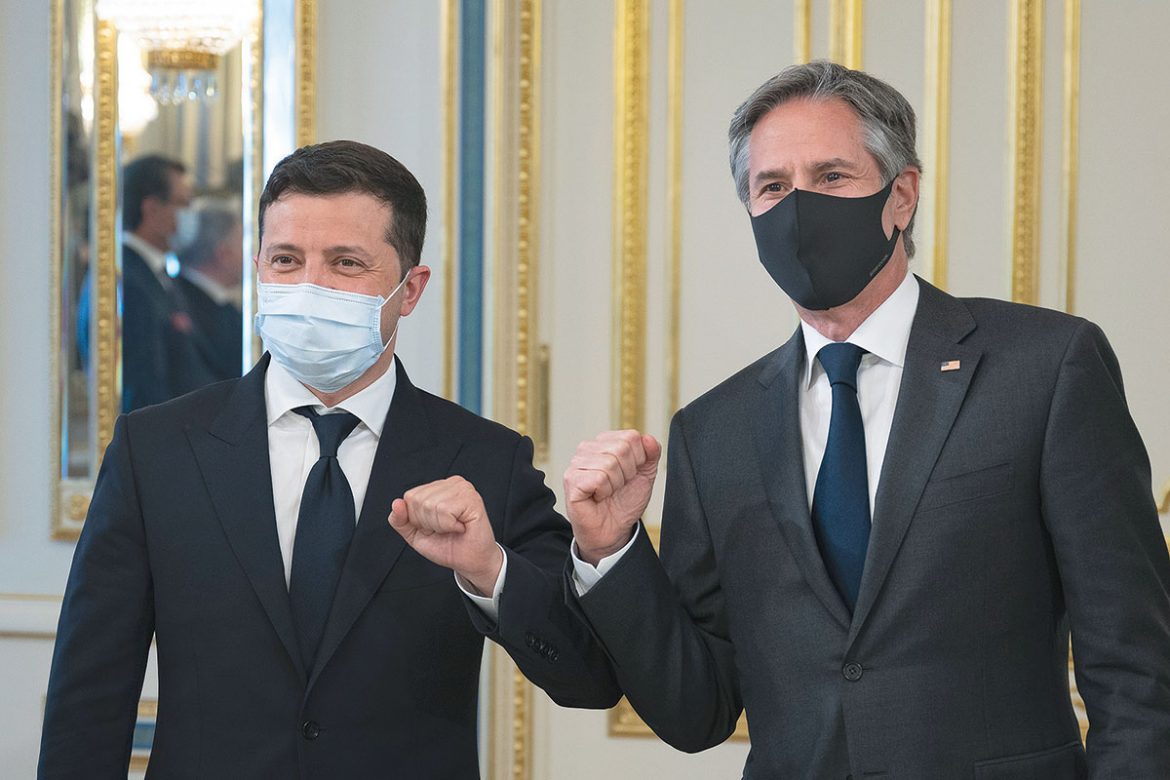 KYIV – U.S. Secretary of State Antony Blinken on May 6 paid a one-day visit to Ukraine where he reiterated U.S. government support for the country’s sovereignty and territorial integrity in the face of Russia’s ongoing aggression.

Mr. Blinken said the U.S. “is seriously considering increasing security assistance,” while noting that much of the more than 100,000 Russian troops and military hardware that amassed at Ukraine’s state border remain there following military drills last month.

“We are monitoring the situation closely,” he added. Regarding the war with Russian-led forces in eastern Ukraine, Mr. Blinken said “there are daily casualties along the contact line, and cyberattacks, and use of force…thus we are against Russia destabilizing the situation in Ukraine.”

The visit comes amid Kyiv’s vociferous aspiration for NATO membership, requests for additional military assistance and permission to purchase more advanced arms from allies to defend against an increasingly belligerent Russia.

Since 2014, the U.S. has provided Ukraine more than $4.6 billion in assistance, including security and non-security aid.

During the meeting, Mr. Zelenskyy expressed hope that at the NATO summit on June 14, discussions will begin on the prospect of Ukraine receiving an Action Plan for membership in the defensive alliance. 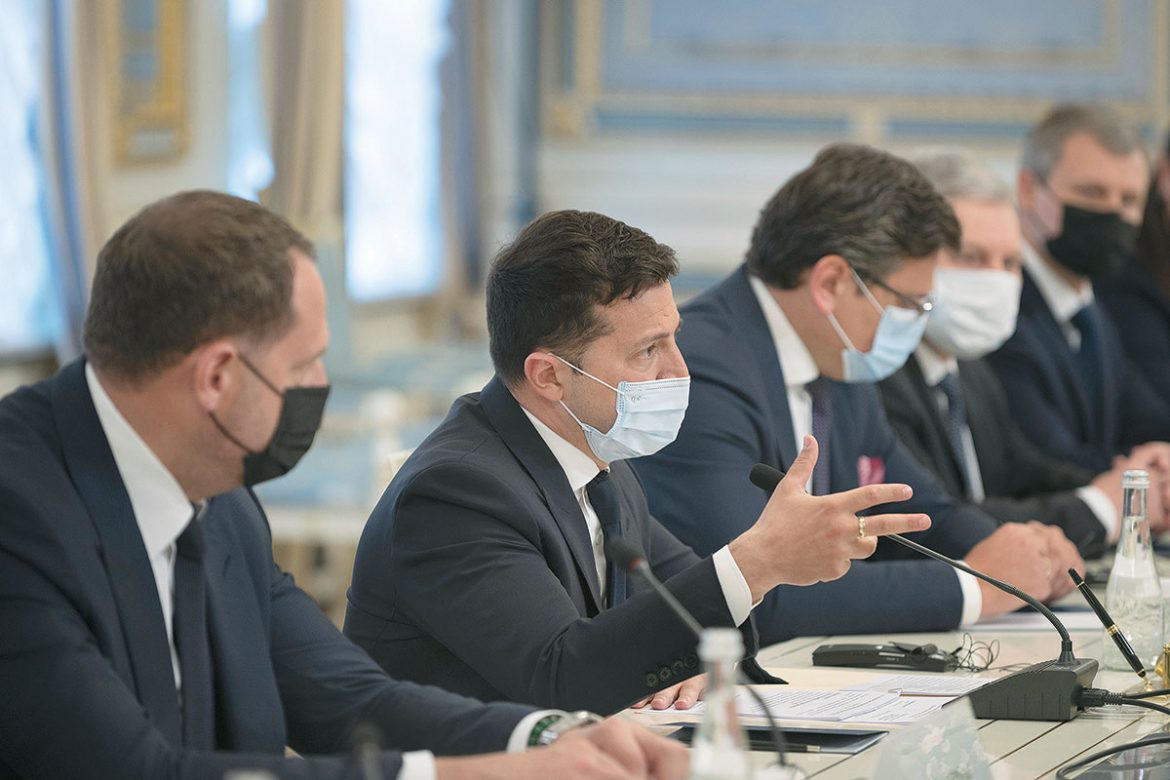 Ukrainian President Volodymyr Zelenskyy (pointing) gestures while speaking to U.S. Secretary of State Antony Blinken in Kyiv on May 6.

“We ask for the assistance of the United States in initiating this process,” he added.

The Ukrainian president in addition thanked the U.S. for its “bipartisan support” in providing technical, humanitarian and security aid. He confirmed that “only about 3,500 Russian troops and hardware have left [occupied] Crimea after military drills, but there is less sniper fire [in the east] from which most of our casualties derive this year.”

Altogether, the Ukrainian president said Russia has 75,000 troops deployed in Crimea, occupied parts of Luhansk and Donetsk oblasts and near the state border.

The previous day, the Wall Street Journal, citing sources at NATO’s headquarters in Brussels, and The New York Times, reported that “senior Defense Department officials said that close to 80,000 Russian troops remained near various strips of the country’s border with Ukraine, still the biggest force Russia has amassed there since Moscow annexed Crimea in 2014.”

Mr. Blinken said Washington is working on advancing “the peace process…to find a way to promote diplomacy to resolve the issue but Russia…doesn’t want to act in good faith concerning the Crimea and Donbas, to restore [Ukraine’s state] borders, its territorial integrity.”

After naming Russia as Ukraine’s “number one foreign threat,” Mr. Blinken said Ukraine’s biggest domestic threat “are oligarchs, corruption and other people who put their personal interests above the nation’s interests.”

He urged Kyiv to forge ahead with judicial reform, a key bottleneck to establishing the rule of law. Mr. Blinken mentioned strengthening “corporate governance” at state-owned enterprises in reference to Naftogaz, a state-run gas conglomerate.

The U.S. government previously criticized recent actions that were taken by the Cabinet of Ministers to fire the gas company’s chief executive by circumventing its Supervisory Board. There is renewed concern that political interference could once again take hold of state-run companies, putting their independence in danger.

Mr. Blinken also urged Ukraine’s parliament to complete the adoption of a bill to revamp the SBU, the country’s domestic intelligence agency – mainly, to strip it of its financial crime investigation unit, a source of the spy agency’s corrupt activities. 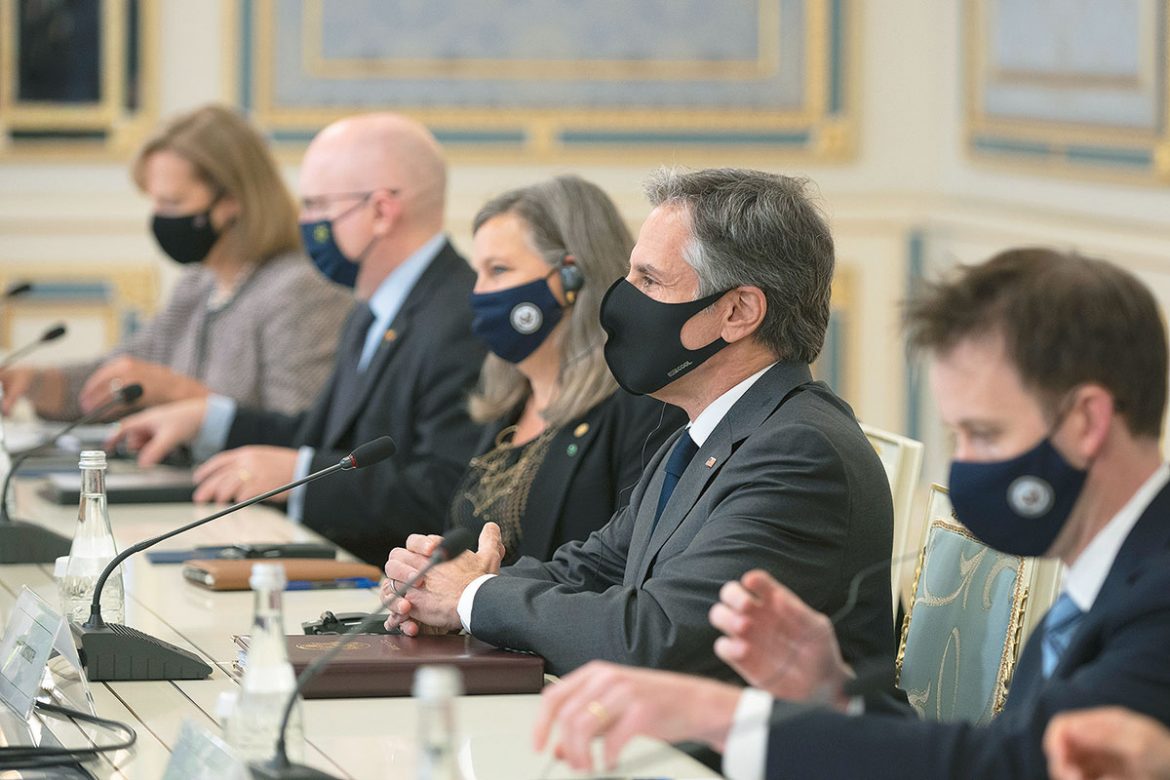 U.S. Secretary of State Antony Blinken (center) and Undersecretary of Political Affairs Victoria Nuland in Kyiv on May 6.

He lauded progress made to make agricultural land a commodity – a moratorium on the sale and purchase of farmland is scheduled to be lifted on July 1.

“Laws are important, but their implementation is also important,” Mr. Blinken said. “The Ukrainian public wants to see this… regarding the fight against corruption.”

Afterward, the U.S. envoy held a separate meeting with Prime Minister Denys Shmyhal.
Mr. Shmyhal stressed that Ukraine is unswervingly committed to the course of reforms, in particular fighting graft and enforcing the rule of law.

“Ensuring the effective operation of anti-corruption institutions, the integrity and independence of the judiciary and the prosecutor’s office, are part of our agenda both in the context of Euro-Atlantic integration and a criterion for continuing cooperation with the International Monetary Fund and the World Bank,” he said.

Prior to visiting Ukraine, Mr. Blinken took part in a meeting of the Group of Seven (G-7) democracies in Britain where they pledged to combine efforts to counter Russia’s “irresponsible and destabilizing” behavior, but offered little concrete action aside from expressing support for Ukraine.

“We are deeply concerned that the negative pattern of Russia’s irresponsible and destabilizing behavior continues,” the top diplomats of Britain, Canada, France, Germany, Italy, Japan and the United States said in a joint statement on May 5 in London.