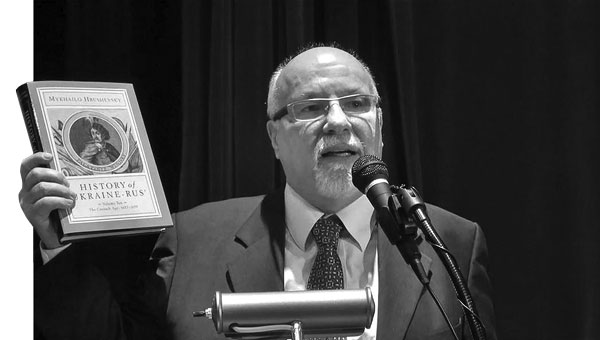 TORONTO – Some 80 supporters of the Hrushevsky Translation Project (HTP) joined family and friends of the late John Yaremko at St. Vladimir Institute in Toronto on Sunday afternoon, December 7, 2014, to launch a new volume of Mykhailo Hrushevsky’s “History of Ukraine-Rus’” and to honor the volume’s sponsor. The event was organized by the Peter Jacyk Center for Ukrainian Historical Research of the Canadian Institute of Ukrainian Studies (University of Alberta) together with St. Vladimir Institute and the Ukrainian Canadian Research and Documentation Center of Toronto.

Volume 10 of the history, subtitled “The Cossack Age, 1657-1659,” is the last of Hrushevsky’s multivolume work to be written by the master historian. The unfinished original was edited by his daughter, Kateryna, and published in 1936, two years after Hrushevsky’s death. The central historical figure of the volume is Bohdan Khmelnytsky’s successor as hetman, Ivan Vyhovsky, whose portrait appears on the volume’s handsome cover. The volume explores the tense situation among the Kozaks after Khmelnytsky’s death and Vyhovsky’s negotiations with both the Muscovite and Polish-Lithuanian sides in an effort to secure his hetmancy and the Kozak state. 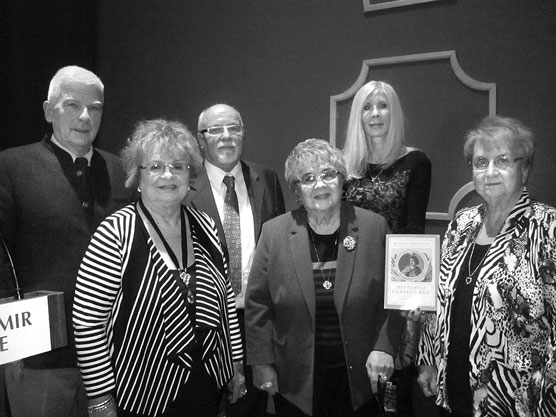 [The Ukrainian Weekly prefers to use the spelling “Kozak” rather than “Cossack” to differentiate Ukrainian Kozaks from Cossacks of other nationalities.]

The new English-language publication features two introductions, as well as extensive bibliographical material. In the first introduction, consulting editor Andrew B. Pernal discusses Hrushevsky’s sources and the structure of the volume. The second introduction, by consulting editor Yaroslav Fedoruk, gives a factual and moving account of Hrushevsky’s creative work during his final years, which was carried out under increasing surveillance, arrest and exile by the Soviet government.

The Toronto launch and celebration opened with a greeting by Paul Strathdee, president of St. Vladimir Institute, who noted the abiding importance of Hrushevsky’s work and spoke of John Yaremko as one of the institute’s founding members. Mr. Strathdee then introduced the audience to three sisters of Mr. Yaremko who were present, Rosalie Yaremko, Lucy Migus and Jeanette Cooke, together with Mr. Yaremko’s niece Hélène Yaremko-Jarvis. The Very Rev. Bohdan Sencio offered a benediction and prayers of remembrance.

Dr. Frank E. Sysyn, director of the Jacyk Center, then addressed the audience. He recalled that in founding the Center, the late Peter Jacyk stipulated that its major undertaking be the publication of a full English-language version of Hrushevsky’s monumental history, thus initiating the Hrushevsky Translation Project (HTP). He went on to speak of Hrushevsky’s dedication, industry and achievement in preparing the final volume of his history despite the tumultuous and threatening circumstances of its writing.

As editor-in-chief of the English-language publication, Dr. Sysyn outlined some of the complexities involved in translating and preparing the Hrushevsky volumes, as well as the multiple tasks undertaken by the HTP team of staff editors and consulting scholarly editors to assure complete and accurate English-language editions. He noted in particular the talented work of Myroslav Yurkevich, managing editor of Volume 10, and the contributions of consulting editors Prof. Pernal and Dr. Fedoruk and HTP managing editor Uliana M. Pasicznyk.

Dr. Sysyn said that Mr. Yaremko, as the first Ukrainian-Canadian to be elected to the Ontario Parliament, understood the importance of Hrushevsky’s work for restoring and amplifying Ukrainians’ knowledge of their past. He spoke warmly of the care Rose Sametz and the late William Sametz of Toronto gave Mr. Yaremko in his latter years, including support of his decision to help fund the Hrushevsky Translation Project. Dr. Sysyn expressed gratitude in particular to the late Mr. Yaremko for his sponsorship of Volume 10, noting the contribution in his memory of the Chair of Ukrainian Studies Foundation (Toronto).

Prof. Paul R. Magocsi, holder of the John Yaremko Chair of Ukrainian Studies at the University of Toronto and member of the Chair of Ukrainian Studies Foundation, spoke from the perspective of teaching history at the university. He expressed satisfaction that because English-language versions of several volumes of Hrushevsky’s history now exist, students of those periods no longer need to rely on the histories of the Russian scholars Soloviev and Kliuchevsky.

Prof. Magocsi also spoke of the remarkably high quality of the English-language volumes of Hrushevsky’s “History of Ukraine-Rus’,” noting in particular their wealth of verified and updated bibliographic data and newly drawn and highly usable maps. Each of the history’s translated volumes is a major scholarly work in its own right, declared Prof. Magocsi. Pointing out that Volumes 2, 3, 4, and 5, now in editorial preparation by the HTP (already published are Volumes 1, 6, 7, 8, 9, Book 1 and Book 2 in two parts, in addition to 10), focus on the little-researched period of the 12th through 15th centuries in Ukrainian history, he anticipated the especially valuable contribution that their English-language editions will be to historical scholarship.

Oksana Zakydalsky briefly introduced a video of an interview she conducted with John Yaremko some years ago. The audience then had the opportunity to view the video and hear Mr. Yaremko himself speak of his upbringing, his academic, professional and personal experience as a lawyer and politician, and his rediscovery as an adult of the history of the Ukrainian people as part of his own. He recalled his indignation at their centuries-long subordination and limited opportunities in their own land, as well as his admiration that despite these circumstances Ukrainians had managed to preserve and develop their identity and culture. In recalling his multi-faceted political service in Canada, he emphasized his consistent commitment to human and civil rights and efforts as minister of citizenship to foster the integration rather than assimilation of newcomers that today is a hallmark of Canada’s multicultural society.

Marta D. Olynyk, translator of Volume 10 and other volumes of the history, offered the audience a unique insight into Hrushevsky’s commitment to scholarship. As a 17-year-old student the future historian learned that in the year of his birth, 1866, not a single scholarly book in the Ukrainian language had been published in the Russian Empire, owing to the severe restrictions mandated by the tsar’s Valuev circular. He vowed to repair that void through his own publications. Hrushevsky kept that promise, managing in his lifetime to produce and publish some 2,000 works of scholarship.

Dr. Marko R. Stech, executive director of CIUS Press, noted the generous support Mr. Yaremko and his late wife, Mary, had given to a broad range of Ukrainian academic and cultural institutions, especially in endowing Ukrainian courses at York University. He also acknowledged work by other members of the HTP team, notably technical editor and indexer Tania Plawuszczak-Stech, mapmaker Wendy Johnson and cover designer Michael Cherkas. Dr. Stech thanked the audience for their attendance and invited them to visit the CIUS Press book table to view and purchase Volume 10, as well as other volumes of the history and publications of the press.

Nadia Jacyk, president of the Petro Jacyk Education Foundation and daughter of the founder of the Jacyk Center, expressed gratitude to Dr. Sysyn and the HTP team for realizing her father’s goal of publishing a full English translation of Hrushevsky’s history. She also expressed gratitude for the Yaremko sponsorship of Volume 10, noting that her late father had respected John Yaremko’s passion, drive and commitment to Ukraine and the Ukrainian community. Ms. Jacyk then presented the Yaremko family with copies of her father’s biography, “Leaving Home.”