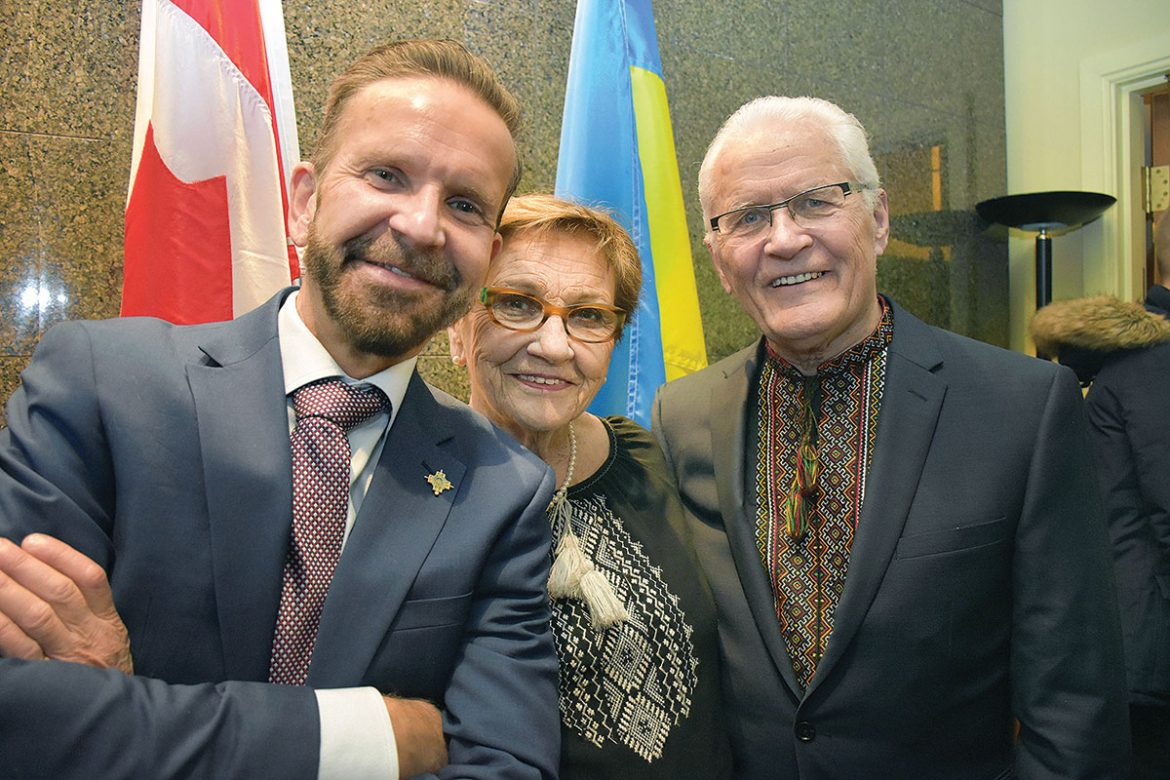 At the Embassy of Ukraine in Ottawa on January 15 for a celebration of Malanka (from left): correspondent Christopher Guly with Marta and Stefan Korbutiak.

OTTAWA – Growing up in Winnipeg, as the grandson of Ukrainian immigrants to Canada, touchstones to my ancestral homeland were everywhere – from my friends’ shared ethnic roots, to the food we ate and the traditions our families maintained.

Within a crowded social Ukrainian-Canadian cultural-religious calendar, Malanka was never as big a deal for me as it was for my peers whose parents were born in Ukraine and who typically followed the Julian calendar. However as a young guy, it was an excuse for a party, with plenty of pyrohy and “pyvo” (beer).

Three decades later, Malanka has become more personally relevant in my current hometown of Ottawa, thanks in part to the folks who represent Ukraine in the capital.

Unlike Winnipeg, with a Ukrainian-Canadian community that has been entrenched in the city’s life since the turn of the 20th- century, Ottawa’s Ukrainian Canadian face is framed more by Ukrainians who have arrived in Canada following the second world war and, more recently, around the time Ukraine regained its independence.

According to the 2016 national census, of the over 1.3 million people who live in the National Capital Region (Ottawa and Gatineau, across the Ottawa River, in Quebec), only 1,830 indicated that their mother tongue was Ukrainian. Of those, more were women (1,045) than men (780).

It is a small yet eager group hungry for Ukrainian cultural activities.

The annual Capital Ukrainian Festival, held in July, certainly whets that appetite. Other activities throughout the year serve as welcome appetizers, and the Ukrainian Embassy’s Malanka celebration has become the pièce de résistance for Ottawa’s Ukrainian community since it was introduced under the watch of Ihor Ostash, who served as Ukraine’s ambassador to Canada from 2006 to 2011.

And what’s not to like? Free vodka shots (get there early); traditional Ukrainian cuisine, including holubtsi, varenyky (I still call them pyrohy and especially enjoyed the cherry-filled ones) and my favorite – a dish with red beets and herring (shuba).

At this year’s event, held on January 15, the menu also included kutia, which I recall as a bland starter to the traditional Christmas Eve dinner but for which I now have a new appreciation thanks to an annual competition the Embassy runs.

To vie for a small gift – and a bottle of Ukrainian vodka – people bring their homemade creations, and it’s usually more than just wheatberries, poppy-seeds, walnuts and honey. Kahlua, as one of many innovative ingredients that have been added to the ceremonial grain dish, extends kutia’s place on the Christmastime menu – for flavor alone – to qualifying as a dessert.

But Malanka on Ukrainian diplomatic territory is not just about eating or drinking.

It’s about fashion. Many of this year’s 150 or so guests wore their finest embroidery in the form of vyshyvanky.

It’s about Christmas caroling or koliadky. Two choirs – Ottawa’s Ukrainian men’s choir Akord and the Assumption of the Blessed Virgin Ukrainian Orthodox Cathedral choir – greeted guests with “Dobryi Vechir Tobi” as the singers entered what would become a jam-packed hall on the lower level of the embassy’s downtown Ottawa location.

Malanka is also about social connections.

“It’s nice to get together with different groups of people,” said Marta Korbutiak, a fellow former Winnipegger who has lived in the Canadian capital for the past 13 years and regularly attends the Ukrainian Embassy’s New Year’s soirée.

“You’ve got newcomers and people who have been here for a while. You have people who don’t speak Ukrainian and those who speak the language, and they all get together and I find that nice,” she commented.

For 80-year-old Mrs. Korbutiak, the annual event is also an opportunity to reconnect with the country of her birth via the diplomatic mission that represents it in Ottawa.

Mrs. Korbutiak was just a girl when she and her family left the Carpathian Mountain city of Kalush in western Ukraine in November 1944 and went to a displaced persons camp in Austria before coming to Canada in 1949.

But she and her 86-year-old husband, Stefan, who also was born in Ukraine, raised their three daughters in Winnipeg with a determination to keep the Ukrainian language and its cultural traditions a priority within their family.

Maintaining those connections sometimes leads to discovering new ones.

Mr. Korbutiak told The Ukrainian Weekly that he shares something in common with Andriy Shevchenko, Ukraine’s 42-year-old ambassador to Canada.

The former journalist and politician, and now diplomat was born in Hvizdets, near the city of Kolomyia in western Ukraine. Mr. Korbutiak, who like his wife immigrated to Canada in 1949 from the Landeck DP camp in Austria, hails from the village of Balyntsi, three kilometers from Ambassador Shevchenko’s birthplace.

Olenka Galadza, a high school teacher and iconographer who was born and raised by Ukrainian parents in Rhode Island and who now lives in Ottawa, described attending the Ukrainian Embassy’s annual Malanka event as “a refresher injection of the Ukrainian spirit I grew up with” in the United States.

“The fact is, if it weren’t for the second world war, I, and many like me, would have been born in Ukraine,” said Mrs. Galadza, who is married to the Rev. Peter Galadza, a Ukrainian Catholic priest and director of the Metropolitan Andrey Sheptytsky Institute of Eastern Christian Studies at the University of Toronto.

Perhaps, were it not for the Embassy Malanka party, personal connections within the Ukrainian Canadian community might also not have been revealed to me.

While chatting with Andriy Sawchuk – a member of the incredibly talented Akord choir who, by day, has been poring over Ukrainian Canadian historical documents at Library and Archives Canada – I learned that his grandparents moved in the 1940s from Winnipeg to the southern Ontario city of St. Catharines, where 48-year-old Mr. Sawchuk was raised.

That was not the only link between us, though.

Mr. Sawchuk is related to a family (the Skrypnyks) whom I knew in Winnipeg, and knows a family (the Korbans) to whom I am related.

The annual Malanka celebration is intended to both celebrate the Ukrainian Christmas and New Year season and “to thank the community for the work we do together,” according to Embassy spokeswoman Zoriana Stsiban.

But over a bowl of creatively concocted kutia, it has also become an evening to recognize the common points we share as members of that Ukrainian Canadian community in Ottawa.