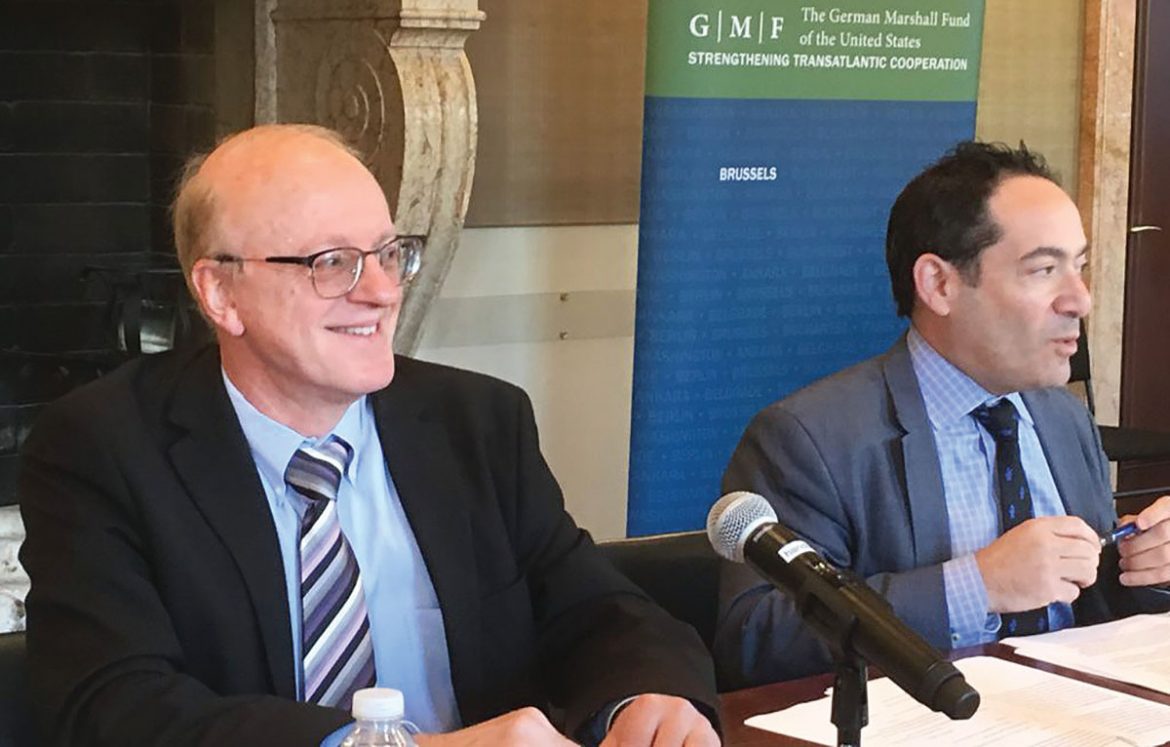 Orest Deychakiwsky (left) and Jonathan Katz at the launch of the Transatlantic Task Force on Elections and Civil Society in Ukraine at the German Marshall Fund in Washington.

WASHINGTON – With Ukraine’s 2019 presidential and parliamentary elections now on the horizon, Ukrainian, American and European experts gathered for the inaugural event of a year-long project aimed at supporting a fair and democratic election process in Ukraine. The launch of the Transatlantic Task Force on Elections and Civil Society in Ukraine took place on October 30 in the format of a three-way video bridge between Washington, Kyiv and Brussels.

The session was moderated by Jonathan Katz, senior fellow at the German Marshall Fund, and Orest Deychakiwsky, board vice-chair of the U.S.-Ukraine Foundation. They are co-chairs of the Friends of Ukraine Network (FOUN) Democracy and Civil Society Task Force and organizers – along with the Reanimation Package of Reforms (RPR) – of this trans-Atlantic initiative.

As noted by Mr. Katz, a former deputy assistant administrator for the Europe and Eurasia Bureau at the U.S. Agency for International Development (USAID), the idea is to create a new platform to enable the Ukrainian NGO sector to better inform Western supporters of Ukraine about reform progress:

“One of the things we really want to do is to institutionalize the engagement of civil society in Ukraine with U.S. policy makers, opinion makers, think tanks, [and] civil society organizations that are focused on Ukraine and focused on Ukraine’s trans-Atlantic integration and democracy. One of the gaps that we saw that existed in forming this effort was one of communication between Kyiv and Washington, and Kyiv and Brussels. And looking at what’s happening on the ground in real time.”

Mr. Katz also underscored that the U.S. Congress, the administration and Ukraine experts in general are paying close attention to the conduct and possible outcome of the Ukrainian election as it “could challenge the trajectory of U.S. policy in the region.”

“The importance of this” effort, he added, “is to benefit civil society in Ukraine, which has really taken the lead over many years but also since the Maidan at moving Ukraine in the right direction” and to strengthen U.S.-Ukraine relations and support the government’s reform efforts. 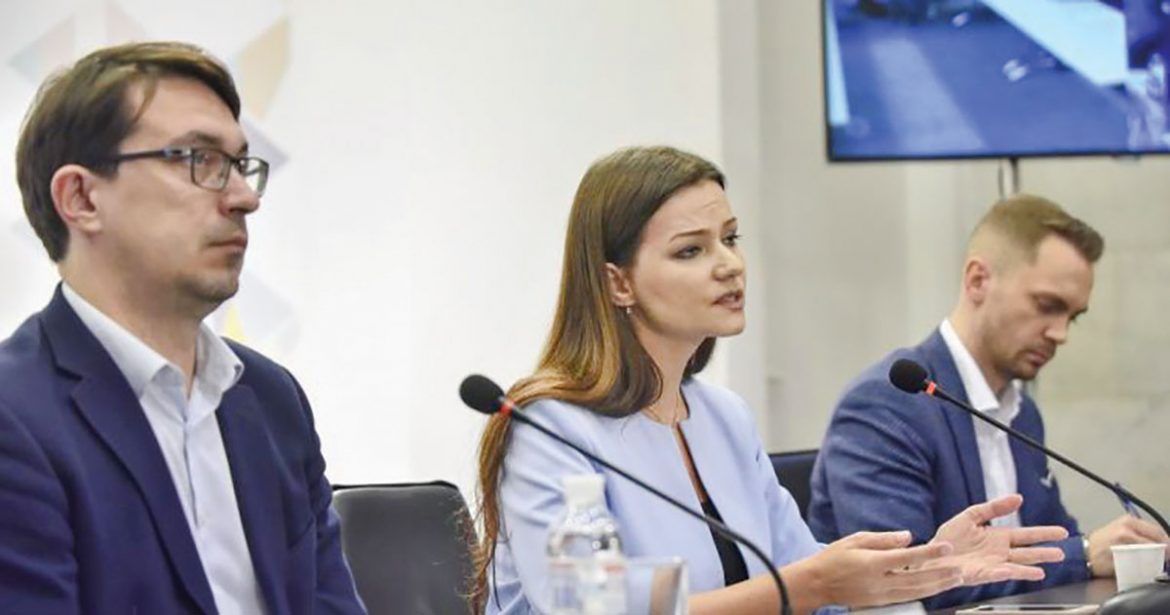 At the Ukraine Crisis Media Center in Kyiv (from left): Ukrainian NGO leaders Denys Kovryzhenko, Olena Prokopenko and Mykhailo Zhernakov at the launch of the Transatlantic Task Force on Elections and Civil Society in Ukraine.

In his remarks, Mr. Deychakiwsky, a former senior policy advisor with the U.S. Helsinki Commission, noted the generally positive international assessment of Ukraine’s last election and presented an overview of many of the election-related issues that are of concern to Washington today, for example, the question of whether Ukraine will move to an entirely proportional parliamentary election system with open party lists. Also, “you have issues of media coverage, especially given [some] media’s reliance on oligarchs – access of candidates and parties. The role of money. And more mundane but essential things like election administration,” he said.

One of the most urgent concerns, he noted, is the problem of “physical attacks on civil society, especially anti-corruption activists and journalists or efforts to obstruct their work. We’ve seen well more than 50 attacks since the beginning of the year, according to recent Human Rights Watch and Freedom House and Amnesty International reports. This is very disconcerting; it needs to be taken seriously. Ukrainian authorities at all levels need to see civil society as an ally and not as an adversary.” And Mr. Deychakiwsky stressed that it’s incumbent on “all of Ukraine’s friends to monitor and encourage the exercise of civil and political rights in advance of these elections.”

The U.S. government and experts are also focusing particular attention on Russian election interference and cyberattacks in Ukraine, including on election infrastructure. “Ukraine has a lot to teach us here – in terms of countering disinformation,” said Mr. Deychakiwsky, referring the audience to a recent Washington Post article on Ukraine’s efforts in 2015 to warn Facebook management about the Kremlin’s spreading of disinformation through this hugely influential social media network.

In her opening remarks from Kyiv, Olena Prokopenko, head of international relations for the Reanimation Package of Reforms (an influential association of some 80 NGOs), expressed the view that, without the engagement of the West and international organizations through statements of support and assistance conditionalities, “most of Ukraine’s reform achievements would not be possible” and that the task force will be an important forum for Ukrainian reformers to convey their policy priorities to U.S. and European Union policy makers and opinion makers.

“[W]e plan to cover the progress of Ukrainian reforms from anti-corruption and judicial reforms, to electoral reform, …to energy independence, to defense, cybersecurity, economic development and, of course, safety for civil society,” she said. Prosecution of those responsible for violent attacks on civil society activists, the draft law on the state Security Service, ensuring fair electoral rules, the transparent selection of anti-corruption court judges, strengthening of the National Anti-Corruption Bureau (NABU), and continued deregulation of the economy and removal of administrative pressure on business are among the top priorities for RPR.

As noted by many experts, major progress on anti-corruption efforts will greatly improve Ukraine’s business environment, make it more attractive for direct foreign investment, and help accelerate Ukraine’s integration into the European Union and NATO.

Explaining the particular reform priorities of Ukrainian civil society, Mykhailo Zhernakov, director of the DEJURE Foundation, explained that, “without the rule of law, without strong judicial institutions, without fair justice, other reforms are not possible, economic growth is not possible, direct investment is not possible, the successful fight against corruption is not possible.”

And he expressed disappointment at the slow implementation of reforms in this sphere, blaming it on a lack of political will and on placing implementation of these reforms into the hands of old judges and the old system, who have a vested interest in preserving the status quo. Civil society has credibility with the population and is well-placed to continue the push for reforms, said Mr. Zhernakov.

Despite a 2014 coalition agreement committing the Parliament to adopting a comprehensive election reform package, Denys Kovryzhenko, senior legal advisor with the International Foundation for Electoral Systems, expressed skepticism that this can be achieved prior to next year’s election. And the impunity of those who are involved in election violations and fraud remains a serious concern. He also raised doubts that the existing mixed system, with half of the MPs (national deputies) coming from single-mandate districts, could soon be transformed into a fully proportional system with open party lists, which would greatly reduce opportunities for manipulation and vote buying.

What can be addressed, however, is fully enfranchising 1.6 million internally displaced persons (IDPs) from the Russian-invaded Donbas and Crimea who have settled in other areas of Ukraine but currently face voting restrictions, Mr. Kovryzhenko said. Millions of Ukrainian labor migrants working throughout Europe will also be encountering voting difficulties and “this can hardly be viewed as consistent with international standards,” he noted.

Along with the Reanimation Package of Reforms, Ukrainian organizations participating in the Transatlantic Task Force on Elections and Civil Society in Ukraine include the Ukraine Crisis Media Center (UCMC), the Center for Democracy and Rule of Law, the Center for Policy and Legal Reform, the OPORA Civil Network, the Democratic Initiatives Foundation, the DEJURE Foundation, the Center for Economic Strategy, the Anti-Corruption Action Center, Center UA and Transparency International Ukraine.

The Brussels office of the Ukrainian World Congress and the Kyiv office of the Ukraine Crisis Media Center hosted the launch event in those two cities, while the German Marshall Fund hosted in Washington. Attendees in Washington included representatives of the National Democratic Institute, the International Republican Institute, the National Endowment for Democracy, the U.S.-Ukraine Foundation, the State Department and USAID.