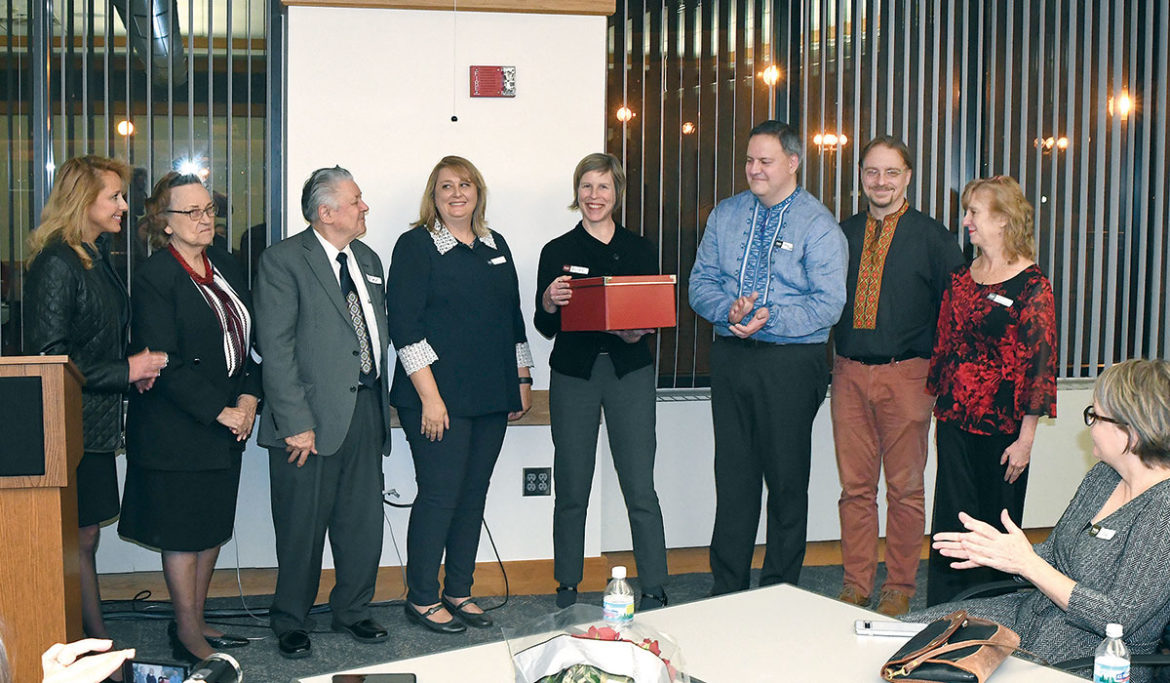 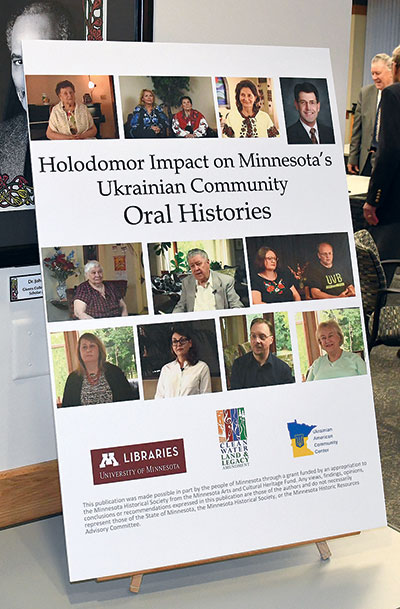 Professionally recorded video files and written, annotated transcripts of 11 interviews with Holodomor survivors, and children and grandchildren of survivors, will be permanently housed at the IHRCA, located at the University’s Elmer L. Andersen Library.

“Our collection’s strengths are first- and second-generation immigrants, including displaced persons who arrived post World War II,” said Ellen Engseth, curator of the IHRCA and head of the University’s Migration and Social Services Collection. “Working with community was integral during our formation 55 years ago and remains central today – and so we are very pleased to host you here today.” 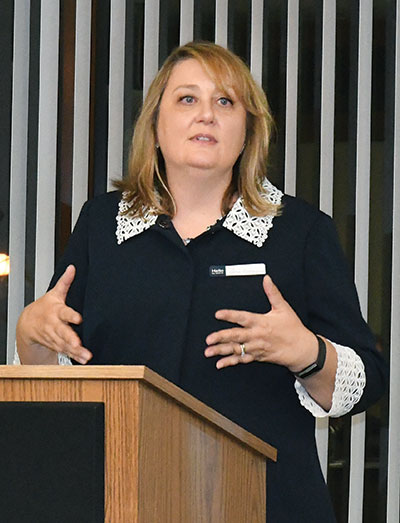 Zina Gutmanis speaks to the group of 50 community members and researchers gathered at the University of Minnesota Andersen Library for the ceremony.

“The project was conceived after I learned three years ago that my grandparents were Holodomor survivors,” said Ms. Gutmanis. “The revelation got me to thinking about whether anybody else I knew in the community had a similar family history. I realized that in our community we talked about the Holodomor primarily as a historical fact, and I was interested in learning more about the personal costs that survivors carried with them, as well as commonalities I may share with other descendants.”

Ms. Gutmanis presented the project at the Holodomor Forum in Philadelphia in October and a paper about the project was read out at an international Holodomor conference held at Taras Shevchenko National University of Kyiv in November. The next phase will be to supplement the oral histories with additional research with the idea of eventually creating a documentary film.

The project was supported by a grant from the Minnesota Historical Society and administered through the Ukrainian American Community Center in Minneapolis.

For more information about the oral histories, readers may contact HolodomorMN@gmail.com.

The following transcript excerpts highlight some common themes that emerged in the oral history interview conducted as part of the project “Holodomor Impact on Minnesota’s Ukrainian Community.”

— Participants relied on stories in books and film to emotionally process their academic understanding of the Holodomor.

“In 1953 [University of Minnesota professor Dmytro] Solovey wrote a book in English titled ‘The Golgotha of Ukraine.’ When this book came out, it spurred people like me to learn more. I knew about the Holodomor from quiet conversations, but to hold something in your hands physically and read about it, well, nothing like that existed. It contains narratives he recorded of various people, various families whose lives he describes: how they lived, what they did to survive, and what happened to them.

“…It was as if we were under some sort of spell, under the horror, and we really didn’t talk about it. All the people who bought the book knew about it because they had been witnesses to the Holodomor. But for some reason, we were just not ready to come out and speak about this loudly.”

“When Slavko Nowytski’s film ‘Harvest of Despair’ was shown in the 1980s, it increased the dialogue in my family and with my Ukrainian friends in my generation. In that format, and to hear survivor stories, and to see so many visual images, that part was new to me. It was akin to studying how horrible the Holocaust was, and then seeing Steven Spielberg putting it together visually. I just sobbed through the entire film.

— Participants spoke about their relationship to food and not wasting food.

“To this day I can’t waste anything. I never leave anything in a restaurant, I always take something home; if I can’t eat it, I give it to a friend or neighbor. When I was growing up it was a sacrilege to throw stale or old bread in the garbage can. You always had to put it out for the birds. I remember when my grandparents passed away and we were cleaning out their house, we found linen napkins with crusts of bread in [them], tucked up in the rafters in the garage and the house. I kind of laughed, [because] I thought she was saving it for the birds – until I heard President [Viktor] Yushchenko talking about his grandparents, [and] how as a safety precaution, they tucked a cloth with crusts of bread into the rafters or in the floor boards so they would never have to go hungry again.”

— Participants felt something about being descended from survivors, even if it was not discussed.

“I don’t know at what age we knew, but I know certainly in our teen years all of us [my siblings and I] became aware of a grief and a suffering in ourselves that had to do with our parents. When I look back, we were all very protective of our parents, very much a caretaker role, probably more than my colleagues who didn’t go through these kinds of things.”

“When the movie ‘Dances with Wolves’ came out, I was in high school and it blew me away! They [Native Americans] experienced genocide, and it’s [depicted in the movie]. That was a big opening from my own Ukrainian background… Understanding your history, at least for me, helps you calm down and put together the pieces so it’’s not just this foreign element agitating you in some way or another. It’s kind of like psychology – talking therapy.”