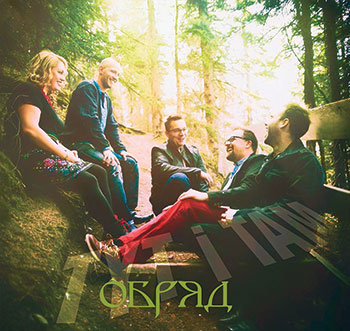 Tyt i Tam performs a unique and progressive style of Ukrainian folk music.

Each member has an extensive background in many varied styles of music, which when fused together creates Тут і Там’s signature sound.

As stated on the band’s Facebook page: “Тут і Там’s creative arrangements and sincere musicality transcend the studio and contribute to their dynamic live shows.”

Selections from Obriad include favorites such as “Vesnianka,” “Arkan” and “Nese Halya Vodu,” but also re-imagined classics like “Sumnyi Sviatyi Vechir”  (which dates from the second world war) that describes the ongoing war between Ukraine and Russia.

The band performed this summer at Canada’s National Ukrainian Festival in Dauphin, Manitoba, and at the Saskatoon Folkfest as part of the Karpaty Pavilion.

Readers can learn more about the band by going to Tyt i Tam’s website, www.tytitam.com or via e-mailing tytitamband@gmail.com. The band’s music is also available for purchase on iTunes and on CDbaby.com.