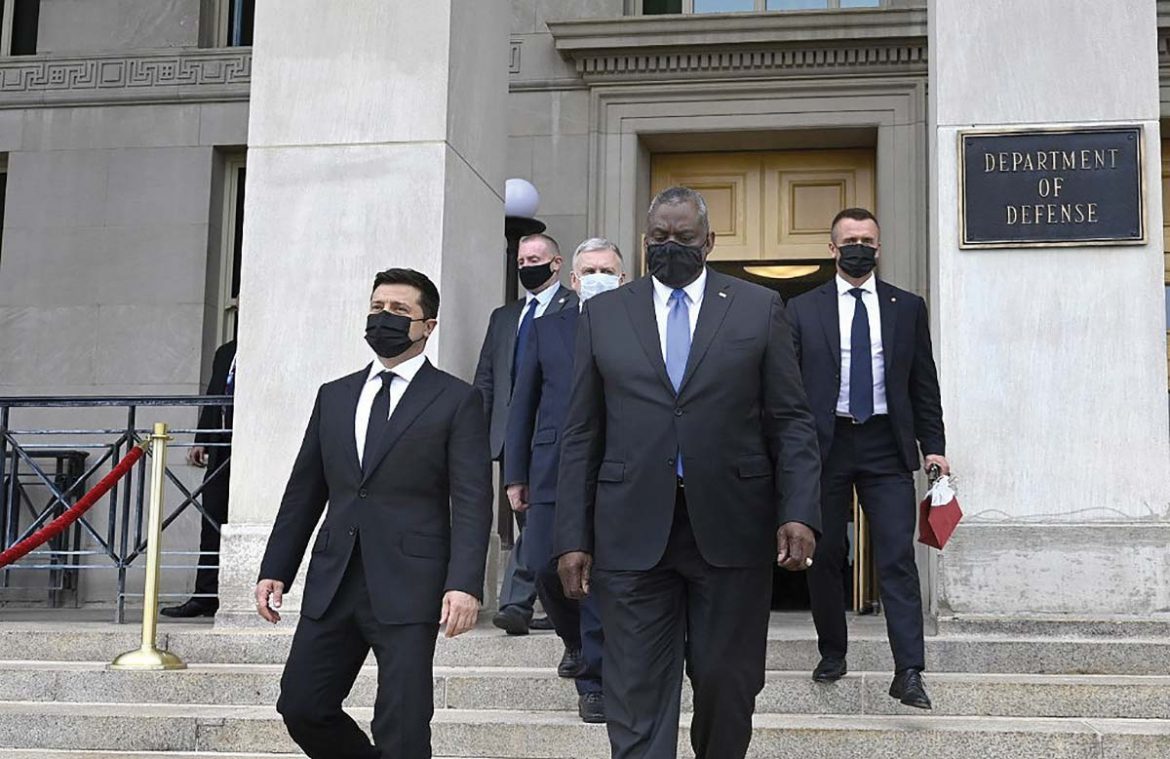 Ukrainian President Volodymyr Zelenskyy met with U.S. Secretary of Defense Lloyd Austin during the president’s trip to the United States on September 1.

Washington promised Kyiv up to $60 million in military aid before U.S. President Joe Biden and his visiting Ukrainian counterpart, Volodymyr Zelenskyy, met in the White House on September 1.

The Biden Administration said in a notification to Congress cited by the AP news agency on August 31 that the aid package for Ukraine was necessary because of a “major increase in Russian military activity along its border” and because of mortar attacks, cease-fire violations and other provocations.

“Russia’s buildup along the Ukrainian border has highlighted capability shortfalls in the Ukrainian military’s ability to defend against a Russian incursion,” the notification states. “Ukraine’s significant capability gaps must be urgently addressed to reinforce deterrence in light of the current Russian threat.”

Mr. Zelenskyy, who arrived in Washing­ton on August 30 on a three-day visit, and Mr. Biden met on September 1 at the White House as part of a visit Washington hoped will demonstrate support for Ukraine’s sovereignty.

Russia took control of Crimea from Ukraine in March 2014 after sending in troops, seizing key facilities and staging a referendum dismissed as illegal by at least 100 countries.

Moscow also backs separatists in a war against government forces that has killed more than 13,200 people in eastern Ukraine since April 2014, although it has consistently denied any role in the fighting.

Mr. Biden is also expected to press Mr. Zelenskyy to tackle corruption in the country and carry out reforms.

Mr. Zelenskyy, meanwhile, is expected to raise Washington’s decision not to block construction of the Nord Stream 2 natural-gas pipeline to Germany that bypasses Ukraine. Mr. Zelenskyy has described the new pipeline as a powerful geopolitical weapon for Russia.

Critics of the pipeline project – which is nearly completed – argue it will strengthen Moscow’s energy hold on Europe and cut Ukraine off from lucrative gas-transit fees, amounting to billions of dollars annually.

The new proposed military aid package to Ukraine will reportedly include more Javelin anti-tank missiles, which Kyiv sees as critical to defending against the Moscow-backed separatists in the Luhansk and Donetsk regions of eastern Ukraine.

In March, the Pentagon announced a $125 million military aid package for Ukraine, including two armed patrol boats to help the country defend its territorial waters.

Military aid to Ukraine became a politically charged issue in the Trump Adminis­tration. Allegations that then-President Donald Trump withheld assistance to Ukraine as part of a scheme to press the Ukrainian government to investigate Mr. Biden and his son Hunter formed the basis of the first impeachment case against Mr. Trump.

Mr. Trump was acquitted by the Senate in February 2020.

Mr. Zelenskyy tweeted that the costs of the construction of five power plant units would amount to up to 25 billion euros ($30 billion).

More than 50 percent of Ukraine’s electricity demand is met by nuclear power at present. Six of the 15 nuclear power plants in operation in the country are already supplied with fuel by Westinghouse. (With reporting by dpa and AP)