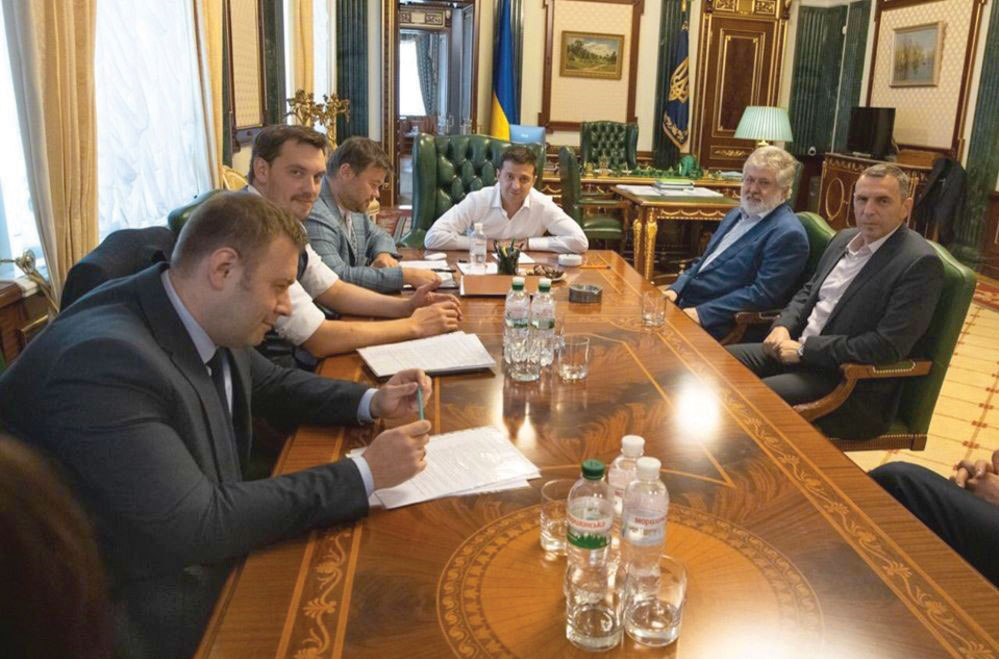 President Volodymyr Zelenskyy (center) is seated next to Ihor Kolomoisky (second from the right) in Kyiv on September 10, 2019.

Though not financial sanctions, the entry ban pertains to when Mr. Kolomoisky was governor of the Dnipropetrovsk region from 2014 to 2015 at the height of the Donbas War against Russian-led forces in Ukraine’s two easternmost provinces of Donetsk and Luhansk oblasts.

U.S. Secretary of State Antony Blinken also said in a statement that the restrictions concern the oligarch’s “current and ongoing efforts to undermine Ukraine’s democratic processes and institutions, which pose a serious threat to its future.”

Ukrainian President Volodymyr Zelenskyy’s office complimented the sanctions the same day in a statement while not mentioning the tycoon’s name. The statement did say the country must overcome the dominant caste system controlled by influential oligarchs.
“Ukraine is grateful to all its partners for support on this path,” the statement said. “The battle with the oligarchs…is also about creating the conditions in Ukraine in which business can grow in a transparent and competitive environment, and large financial groups will not be able to dominate the market or influence the media and political decisions.”

His spokeswoman, Iuliia Mendel, also wrote a blog for Washington-based Atlantic Council that amplified the president’s goal of ending “the oligarch era.”

As such, the State Department’s 7031c designation means that the mogul’s wife, Irina Kolomoiska, his daughter, Angelika Kolomoiska, and his son, Israel Zvi Kolomoisky, are ineligible for entry into the United States.

Mr. Blinken didn’t say what specific human rights violation or corrupt act the influential Ukrainian was or is allegedly involved in, but he is being investigated in the U.S. and Ukraine for one of Europe’s largest bank heists.

The U.S. Justice Department suspects him of misappropriating hundreds of millions of dollars from his former bank – PrivatBank – to purchase assets in the U.S. The bank once serviced 20 million private clients and is still Ukraine’s largest lender.
Ukraine nationalized the bank in 2016 after an international auditor and regulators discovered a $5.5 billion gaping hole in its balance sheet.

Mr. Kolomoisky has denied wrongdoing and has maintained he is the rightful owner of the bank while pursuing lawsuits in various jurisdictions to regain control of the lender. He did not respond to a phone call or text message sent to him requesting comment.

He and Mr. Zelenskyy have a business relationship lasting about a decade. A former comedian with no political experience, the president’s skit shows and a popular TV series in which he played a fictitious president, aired on Mr. Kolomoisky’s TV channels. The tycoon also backed his presidential campaign and returned from self-exile in 2019 after Mr. Zelenskyy was elected president.

From 2006 to 2016, Mr. Kolomoisky and his partner, Hennadiy Boholyubov, allegedly used shell companies to launder money that they fraudulently shifted from PrivatBank while buying 22 properties in Illinois, Ohio, Kentucky, West Virginia and Texas.

They include “an iconic skyscraper in Cleveland…a shuttered Motorola facility in rural Illinois and a Dallas office park that was once the headquarters of Mary Kay Cosmetics,” according to a separate investigation conducted by the Investigative Consortium of Investigative Journalists.

Other assets include at least nine steel mills in Michigan, Indiana and other states.
Attorneys for the now state-owned bank said Messrs. Kolomoisky and Boholyubov used PrivatBank “as their personal piggy bank,” according to a court filing in Delaware.
Both of the accused have denied the allegations and have stated that the U.S. assets were bought using $2 billion they earned from selling a steel business in Ukraine.

Last year, the Justice Department launched a civil case against the two partners seeking forfeiture of some of the properties they amassed.

The Federal Bureau of Investigation (FBI) is also investigating them and has raided two companies under their control in Miami and Cleveland.

Mr. Kolomoisky has also sought assistance in gaining entry into the U.S. as recently as 2017 when he retained the Washington-based lobbying firm Arent Fox for $50,000 to assist him with obtaining an E-2 investor visa.

The same year in Ukraine, the National Anticorruption Bureau of Ukraine (NABU) started investigating Mr. Kolomoisky regarding the alleged PrivatBank loan recycling scheme in which fraudulent corporate loans were paid off with money from new fraudulent corporate loans. The process used was similar to how Ponzi schemes operate whereby early investors are paid with funds from more recent investors.

Last month, NABU detained one of three suspects, who are all former high-level executives, related to PrivatBank. They are accused of funneling the equivalent of $4.9 million from the bank.

Mr. Dubilet’s Ukrainian cell phone number is out of service, as a reporter for The Ukrainian Weekly learned when an attempt was made to call his cell phone.

Mr. Zelenskyy has slowly distanced himself from Mr. Kolomoisky since taking office. On February 11, 2020, the president dismissed his top aide, Andriy Bohdan, who has legally represented the oligarch in cases stemming from PrivatBank’s collapse.

Still, the tycoon controls at least 30 national lawmakers who are nominally part of Mr. Zelenskyy’s Servant of the People party.

One of them is Oleksandr Dubinskiy who was expelled from the party on February 1 after the U.S. Treasury Department sanctioned him a month earlier for meddling in the 2020 U.S. presidential election. Those measures block any of his U.S. assets, including dollar-denominated accounts.

Mr. Kolomoisky and other oligarchs, including pro-Russian lawmaker and tycoon Viktor Medvedchuk, have opposed economic and anti-graft reforms that would unlock further lending from the International Monetary Fund and other sources of Western funding.

Washington and Brussels have successfully pushed for a bill to safeguard the banking sector which prevents the former owners of nationalized banks to regain control over their previously-owned banks.

Mr. Kolomoisky’s U.S. visa ineligibility “is [only] the beginning,” Ms. Mendel said in an interview posted on YouTube on March 9 with Olesya Batsman, editor-in-chief of Gordon.

When asked if the Ukraine would extradite Mr. Kolomoisky if the U.S. requested it, she said: “We’ll see. … I’m not a fortune teller.”