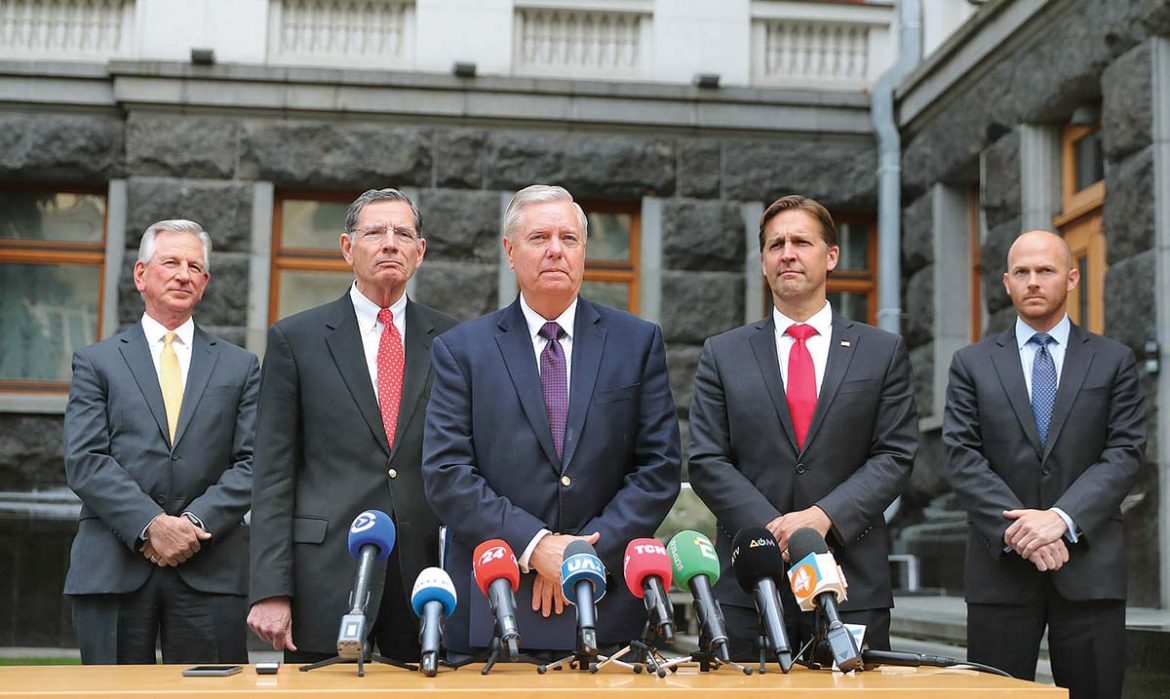 KYIV – A group of five U.S. lawmakers led by Sen. Lindsey Graham (R-S.C.) paid an unexpected visit to Ukraine on the same day that the Russian operator of a controversial natural-gas pipeline announced that it had completed the final stages of welding it together.

Mr. Graham said after speaking with the Ukrainian president, Defense Minister Andriy Taran and Foreign Affairs Minister Dmytro Kuleba that Congress will push for “additional military assistance” to Ukraine, which is mired in a war with Moscow that is now in its eighth year.

The South Carolina senator acknowledged “that we are deeply moved by the loss of more than 13,000 lives in the fight for their [Ukraine’s] freedom.”  The number of people killed is a result of a Russia-instigated war that is being waged in the two easternmost regions of Luhansk and Donetsk.

“You’ve lost 49 soldiers this year alone. … We will provide aid to keep your freedom, and to let [Russian President Vladimir] Putin know that Ukraine is never going back under his yoke,” Mr. Graham said.

For his part, Mr. Zelenskyy said in a statement that energy security was part of his discussions with the U.S. lawmakers.

He thanked the visiting delegation for “a clear understanding of the security threats posed by the implementation of the [Russian] Nord Stream 2 project,” which will eliminate Ukraine as a gas transit country to Europe and further expose it more to Moscow’s military bellicose behavior.

“The Kremlin has used and continues to use gas supplies as a weapon. The sanctions pressure on Nord Stream 2 should be maintained,” Mr. Zelenskyy said, referring to the restrictive measures that were in place on the 1,230-kilometer-long Russia-controlled underwater pipeline project. U.S. President Joe Biden waived portions of those sanctions in May, defending the move by saying that the Nord Stream 2 (NS2) pipeline was 90 percent complete when he took office.

Officials in Kyiv have maintained that NS2 is a purely “political” project, not commercial, in that it will circumvent the country’s already existing and capable pipeline network that has customarily supplied gas to Russia’s buyers in Europe.

Hurdles for NS2 to become operational and the extent of its 55-cubic billion yearly capacity, which will double the volume of Nord Stream 1, remain.

Although Russian state-owned gas export monopoly Gazprom says that the last weld of pipe was completed on August 6, the project is still facing obstacles.

A German court in Dusseldorf on August 25 overruled an appeal by the pipeline’s Swiss-registered Russian operator, which ultimately controls NS2, after the country’s energy regulator said it wasn’t exempt from the European Union’s rules on fair market competition.

Specifically, the petitioned court ruled in favor of the EU’s so-called Third Energy Package, which stipulates that an energy producer cannot be a monopoly provider.

However, Gazprom insisted that financing of the pipeline project was completed before the rules went into force in May 2019. The German Duesseldorf Higher Regional Court ruled that it hadn’t been physically completed, and therefore was not exempt.

The group of companies behind NS2, at the head of which is Gazprom and Germany’s Uniper, are Wintershall Dea, a unit of BASF, Anglo-Dutch Shell, Austria’s OMV and French-based Engie.

Based on the EU’s energy rules, Gazprom would only be allowed to directly sell up to 50 percent of its gas to Europe via NS2.

“The remainder shipped through the pipes would have to be ordered by other customers who want to transport it,” Oleksandr Kharchenko, managing director of the Energy Industry Research Center in Kyiv, told The Ukrainian Weekly.

Gazprom can still challenge the German court’s ruling by appealing to the Federal Court of Justice. The Russian gas giant asserts that it is a form of targeted discrimination against its operation.

“The rejection of Nord Stream 2 AG’s application for a derogation exposes the discriminating effect of the amended EU Gas Directive,” a Gazprom spokesperson told The Moscow Times.

“The pipeline still needs to be certified and approved for use. Certification is expected to take up to four months but will only start once all paperwork is complete, which entails checks by the German economics ministry …” Reuters reported.

Afterward, “the European Commission (the executive branch of the EU), will scrutinize the decision by the German [energy] regulator and approve or disapprove whether its decision is correct,” Svitlana Zalishchuk, who advises Naftogaz CEO Yuriy Vitrenko, told The Ukrainian Weekly.

Last month, Mr. Biden and outgoing German Chancellor Angela Merkel both agreed to allow the completion of NS2 in exchange for additional support for Kyiv. They threatened unspecified sanctions should Russia weaponize energy to coerce Ukraine.

The talks were held in Washington and without Ukraine’s participation. During his White House visit earlier this month, Mr. Zelenskyy received assurances that Ukraine would receive an additional $60 million worth of assistance in defense and security aid.  The money will help Kyiv continue to defend Ukraine from further Russian aggression.

Ukraine in October will be further cutoff as a gas supplier when neighboring EU country and NATO-member Hungary will start receiving gas from Gazprom’s other pipeline project, TurkStream, which runs further south and much farther away than its border with westernmost Zakarpattia Oblast, raising questions of extra transit costs.

Kyiv’s “pump-or-pay” gas transit contract with Moscow expires at the end of 2024 and is worth $7 billion. When the contract was renewed at the end of 2019, about 40 percent of the 200 billion cubic meters of gas that Russia had sent to Europe yearly was transmitted through Ukraine.

As NS2 becomes operational, Russia has over the summer reduced gas volumes to Europe when it is cheaper to purchase and store gas for use during winter months and when the market price of gas subsequently increases. Future gas prices on the continent have reached “all-time highs,” a Wall Street Journal article said on August 25.

As of September 1, future gas prices in Europe for the following month went beyond $650 per 1,000 cubic meters, according to Bloomberg.

Still, Ukraine’s state-owned Naftogaz company, which is affiliated with TSOUA, is not relenting on its position that NS2 should not be operational.

On August 27, the Naftogaz CEO, Mr. Vitrenko, said on Facebook that the company is still pursuing other options to let Russia ship blue fuel to and through Ukraine via international arbitration courts.

His goal for Ukraine is to ensure it remains a viable gas transit country until at least 2035 when he believes “renewable energy sources will replace natural gas” in the country, he said.

Another point of contention, he mentioned, was that the gas transit contract should stipulate that the actual transfer of gas takes place at the Russian-Ukrainian border so that European countries order it directly from Ukraine “until 2035.”

Perhaps, the most important point the CEO said, is for Russia to allow gas from Central Asian countries to be shipped through its pipelines to Ukraine for its own supply.

“Gazprom must ensure non-discriminatory access to all pipelines that connect Russia with Europe, including Ukraine,” Mr. Vitrenko said.

Energy Expert Andrian Prokip of the Ukrainian Institute for the Future also voiced caution regarding the threat NS2 poses to Kyiv’s national security.

“The government should pay urgent attention to geopolitical issues surrounding Ukraine’s role as a gas transmitter and to modernizing the country’s internal distribution systems,” he wrote for the Washington-based Wilson Center think tank. “[It] should set aside populist pricing and policy strategies.”

He added that Ukraine could develop “a stronger, more robust economy…but only if the energy sector can be transformed.”