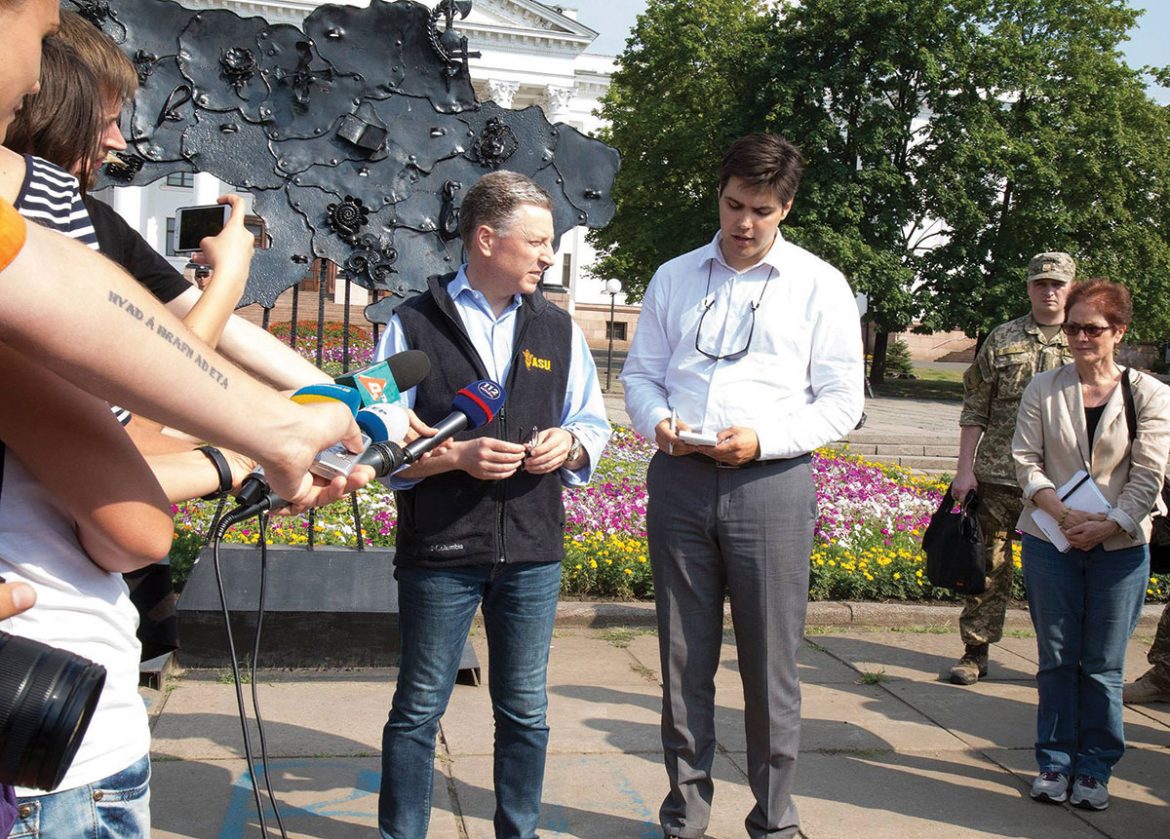 KYIV – The new U.S. special envoy for Ukraine peace negotiations said he was stunned by the number of ceasefire violations in the country’s war-torn east after making his first visit to the region.

Kurt Volker, who was recently appointed as Washington’s point man for talks on ending the war between Kyiv’s forces and Russia-backed separatists in eastern Ukraine, made the comment in a July 23 interview after spending the day at the frontlines of the conflict.

“The level of ceasefire violations on a daily basis is astonishing,” Ambassador Volker told RFE/RL by telephone from a train bound for Kyiv, where he was set to hold talks with Ukrainian officials the following day.

Mr. Volker’s assessment came hours after he told a news conference in Kramatorsk, the headquarters of Kyiv’s military operation against the separatists, that Ukraine is locked in a “hot war” whose origins he blamed on Moscow.

“This is not a frozen conflict, this is a hot war, and it’s an immediate crisis that we all need to address as quickly as possible,” the envoy told reporters in the government-controlled eastern city.

Asked later during the news conference whether the United States understood that Russian “aggression” was to blame for the situation and not a “civil war,” Mr. Volker answered in the affirmative.

Mr. Volker’s visit to eastern Ukraine was his first to the region since his appointment in early July as Washington’s special representative on negotiations to bring an end to the conflict, which has killed more than 10,000 since April 2014.

Kyiv, the United States, the European Union, and NATO accuse Russia of backing the separatists with weapons and personnel. Moscow rejects the accusation despite substantial evidence of such support.

A ceasefire deal signed in February 2015 in the Belarusian capital, Minsk, has failed to end the violence, which has recently flared up. Ukraine and the Russia-backed separatists accuse each other of violating the deal.

Mr. Volker told RFE/RL that the recent spike in hostilities, in which at least nine Ukrainian soldiers were killed over the previous 72 hours, were of particular concern.

Earlier on July 23, Mr. Volker visited the government-controlled town of Avdiyivka near the frontline, wearing a tan bulletproof vest and helmet for part of the trip.

He told RFE/RL that it was “shocking” to see the walls of apartment buildings where civilians still live “blown out” by direct artillery strikes.

He said he was most shocked by the human cost of the war, which he discussed with schoolteachers who have endured years of fighting, and a man who “lost his legs and had his hands blown off” when a shell exploded on the street where he was walking.

Mr. Volker said he also talked about the impact the war has had on the local economy, meeting with a man whose business was taken over by Russia-backed forces in the eastern city of Donetsk, forcing him to flee.

In a video released by the Ukrainian military on July 23, Ambassador Volker was shown arriving by helicopter at its operations in the east and speaking with military officials there.

Asked if he plans to visit the other side of the frontline, he told locals and the media on July 23 that he plans “to meet a Russian counterpart at some point.”

“I think that meeting with the Russians is what we need to do in order to gain the perspective – the strategic perspective – over how to resolve this,” he added.

The U.S. State Department said on July 21 that during his visit to eastern Ukraine, Ambassador Volker would “meet with those who have been affected by Russian aggression” and “discuss the importance of security and safety for all Ukrainians.”

He was set to meet Ukrainian officials in Kyiv on July 24 “to discuss the path to restoring Ukraine’s sovereignty and territorial integrity,” the State Department said.

Following his stopover in Kyiv, Volker was to travel to Paris to meet with French and German officials on the Minsk accords, which were brokered by German Chancellor Angela Merkel and former French President Francois Hollande.

From there he heads to Brussels to meet European Union and NATO officials to discuss resolving the Ukraine conflict.

Mr. Volker told RFE/RL that his appointment, his visit to eastern Ukraine, and his upcoming visits to France and Brussels are “a response to the need” for the United States to play a greater role in the Ukraine peace process.

Despite U.S. President Donald Trump’s stated desire to improve ties with Moscow, his administration has maintained the punitive measures targeting Russia for its actions in Ukraine that began under Mr. Trump’s predecessor, Barack Obama.

The Obama administration hit Russia with several waves of sanctions over its seizure of Ukraine’s Crimean peninsula and subsequent backing of the separatists.

Republican and Democratic lawmakers in Washington, meanwhile, said they have reached agreement on legislation that would allow new sanctions targeting Moscow – as well as Iran and North Korea – and would limit any possible effort by President Trump to ease sanctions against Russia.

The Republican-led House of Representatives passed the bill by a vote of 419-3 on July 25. The legislation would require the White House to obtain permission from Congress before easing or lifting sanctions against Russia.

With reporting by Reuters and AP.