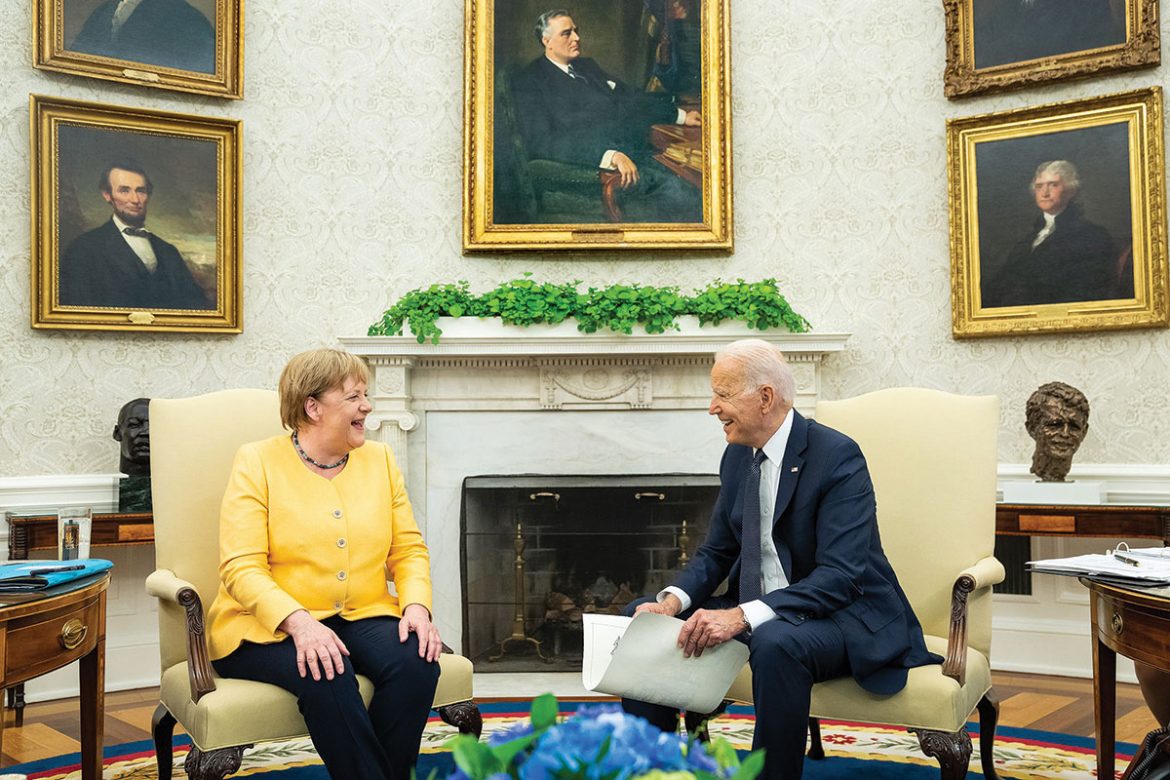 KYIV – Ukraine is still pursuing a last-gasp effort to halt a Kremlin pipeline project to Germany despite an agreement reached between Washington and Berlin to allow its completion, leaving Ukraine vulnerable to further Russian military aggression.

The efforts come as a White House invitation has been extended to Ukrainian President Volodymyr Zelenskyy for August 30 and while the chief executive of the country’s main oil gas company – Naftogaz – Yuriy Vitrenko, is on a two-week lobbying visit to Washington to reap bi-partisan Congressional support to re-impose sanctions on the project.

Ukrainian Foreign Affairs Minister Dmytro Kuleba furthermore met with his Polish counterpart, Zbigniew Rau, to discuss the Russian-controlled Nord Stream 2 (NS2) project that will not only circumvent Ukraine’s existing pipeline network to Europe but also adversely affect the energy security of Europe, according to critics of the pipeline project.

In a joint statement released on July 21, Messrs. Kuleba and Rau castigated the U.S.-Germany “energy deal” for being meaningless and containing no elements that would reduce the pernicious effects of the project on national and energy security.

“Currently, this crisis is significantly deepened by the resignation from attempts to stop the launch of the NS2 gas pipeline,” the joint statement said. “This decision has created [a] political, military and energy threat for Ukraine and Central Europe, while increasing Russia’s potential to destabilize the security situation in Europe, perpetuating divisions among NATO and European Union (EU) member states.”

The following day, Mr. Kuleba said on Facebook that Kyiv has “many questions” on how the agreement “is capable of reducing security risks for Ukraine…we honestly always said for us NS2 is foremost a security matter.”

NS2 is an underwater, 55-billion-cubic-meter (bcm) pipeline that will supply Russian Arctic gas to Germany and will double the capacity of the current volume sent to the country through Nord Stream 1. As much as 40 percent of the gas imported yearly by Europe comes from Russia, and as a result NS2 will essentially eliminate Ukraine as a strategic gas transit country to the continent.

Russia’s current gas-transit contract with Ukraine expires in 2024. As a result of that contract, Ukraine usually receives between $2 billion and $3 billion in hard currency revenue.

Critics in and outside Ukraine fear that once the pipeline becomes operational, Russia could further coerce Ukraine on all fronts, including on the conventional military side. Some 14,000 people have been killed in Ukraine since early 2014 after Russia forcibly seized Ukraine’s Crimean Peninsula and subsequently invaded certain parts of the easternmost regions of Luhansk and Donetsk. 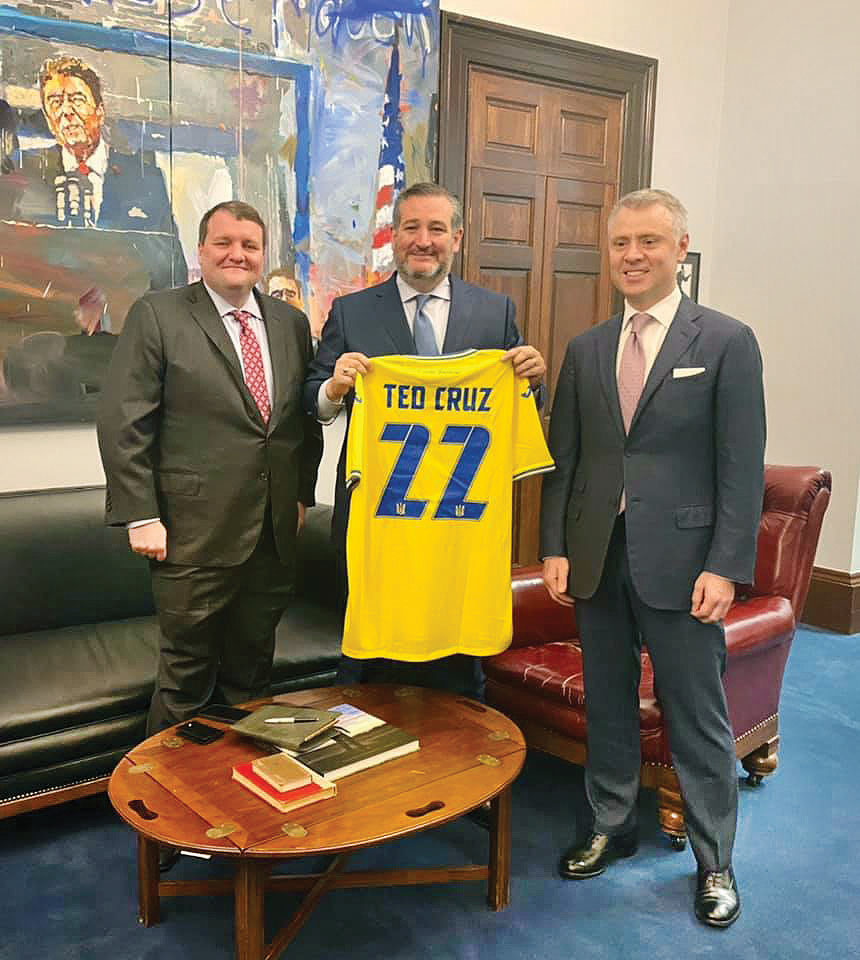 Pictured during a meeting in Washington on July 21 are (from left): Andrew Mac, non-staff adviser to the Ukrainian president; Sen. Ted Cruz (R-Texas) and Yuriy Vitrenko, chief executive of Naftogaz.

Russian state-owned gas giant Gazprom, moreover, this summer has restricted gas supplies to Europe, driving up prices that would normally be cheaper during non-peak months when household heating isn’t required.

The Baltic countries of Estonia, Lithuania and Latvia, as well as Poland and other EU countries, have opposed the $11 billion project, which is nearing completion.

Russia through Gazprom is financing half of NS2, while five European companies are splitting the rest of the cost, including OMV, Uniper, Wintershall, Royal Dutch Shell and Engie.

U.S. President Joe Biden waived sanctions on NS2 in May, defending the decision as a fait accompli because it is more than 90 percent complete. Resistance from bi-partisan congressional lawmakers has ensued, while Sen. Ted Cruz (R-Texas) has blocked certain Biden administration appointments until the corresponding restrictive measures are reinstated.

Meanwhile, German Chancellor Angela Merkel, who brokered the energy security deal with Mr. Biden, called it “good” for Ukraine while speaking on July 22 to journalists in Berlin after returning from Washington.

Released on July 21, the U.S.-German energy deal has four principal points designed to mitigate the national and energy risks to Ukraine.

“Should Russia attempt to use energy as a weapon or commit further aggressive acts against Ukraine, Germany will take action at the national level and press for effective measures at the European level, including sanctions, to limit Russian export capabilities to Europe in the energy sector, including gas, and/or in other economically relevant sectors,” the statement said.

No specific measures were mentioned in the statement, including a so-called kill-switch clause that would enable Berlin to cut gas flows should Russia act aggressively toward its neighbors, however.

Officials in Washington who provided briefings on the agreement said that the language of the statement was left deliberately vague so that Russia wouldn’t develop countermeasures.

The joint package for Ukraine includes Germany utilizing “all available leverage to facilitate an extension of up to 10 years to Ukraine’s gas transit agreement with Russia, including appointing a special envoy to support those negotiations, to begin as soon as possible and no later than September 1,” according to the terms of the agreement. 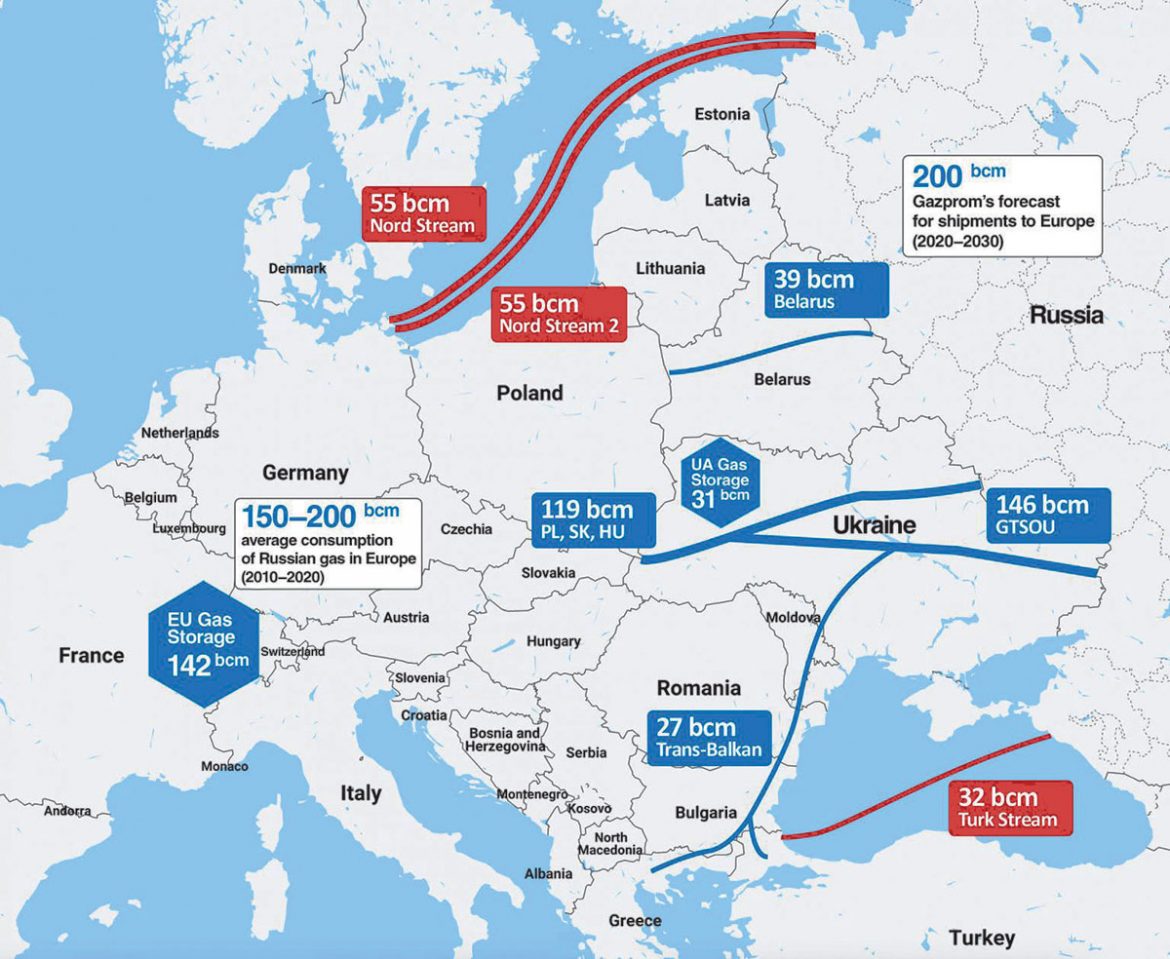 A map shows gas transit routes from Russia to Europe.

The U.S. and Germany committed to establishing a “Green Fund” for Ukraine of at least $1 billion to diversify its energy resources, an endeavor upon which Kyiv has already embarked.

For example, a decade ago Ukraine was importing 70 bcm for domestic use. That number is now down to 10-15 bcm. Conversely, Ukraine would transit more than 100 bcm of gas from Russia, but now Ukraine can hardly expect to ship 60 bcm.

Speaking to journalists in Kyiv on July 21, U.S. State Department Counselor Derek Chollet rebuffed a report by U.S.-based Politico that suggested the U.S. had pressed Ukraine to not criticize the Russian gas pipeline.

He said that “Ukraine is a democratic country. It has its own voice.”

The unveiled energy package hasn’t stopped Mr. Vitrenko, the CEO of Naftogaz, from seeking congressional support for sanctions in Washington, especially since the Ukrainian president’s White House visit will take place when Capitol lawmakers will be in summer recess from August 7 to September 20.

So far, he said on Facebook, “we have strong bipartisan and bicameral support! Our American partners in Congress fully share the position that Nord Stream 2 threatens Ukraine’s security.”

The tools to stop the project “are still there,” he added.

Rep. Michael McCaul (R-Texas), member of the House Foreign Affairs Committee, said that he had no doubt Russia “will use the Nord Stream 2 pipeline as a weapon of coercion against Ukraine and transatlantic energy security as soon as it is operational.”

U.S. Sen. Jim Risch (R-Wis.), who sits on the Senate Foreign Relations Committee, said the agreement “was negotiated without the participation and consent of key allies like Ukraine and Poland.”

Rep. Marcy Kaptur (D-Ohio) said before the agreement was announced that “Congress must reject any deals that fail to protect transatlantic security and Ukraine’s sovereignty.”

Both sides of the aisle have also urged the White House to reschedule Mr. Zelenskyy’s upcoming visit because of the summer recess, which would deprive him of the opportunity to meet with lawmakers.

Regarding the timing of Mr. Zelenskyy’s visit, Ms. Kaptur said: “I don’t like that time at all,” while adding that “we have sent letters to President [Joe Biden] urging that this date be changed so that members of Congress can be here in Washington at the same time.”

A separate security agreement with the U.S. is being discussed behind closed doors that might include giving Ukraine non-NATO ally status, a Ukrainian presidential adviser told The Ukrainian Weekly. The deal is “hopeful, but not certain,” the adviser said.

The Ukrainian Congress Committee of America (UCCA), which is the largest representative body of the Ukrainian diaspora in the U.S., also criticized the agreement.
“Nord Stream 2 is a geopolitical scheme designed to provide [Mr.] Putin’s Russia with additional malign influence on our European allies and partners,” a statement released on July 20 by the organization said in response to reports of the deal that was made public the following day.

Representing nearly 2 million American Ukrainians, the group said that Washington should “not only fully administer congressionally mandated sanctions against…[NS2]…it should further sanction any of the subcontractors that work… [it]…to ratchet up the pressure on Russia to finally leave Ukrainian territory.”

“What do the U.S. and Germany have to talk about regarding Ukraine and Russia now? Telling [Russian President Vladimir] Putin he can’t fire the gun Germany built and they helped him load and point at Ukraine’s head,” he tweeted on July 20.

Germany’s The Greens party, the main opponent to Ms. Merkel’s party when she steps down during the September 27 Bundestag elections, also voiced opposition to the deal.

“At a time when [Mr.] Putin is putting massive rhetorical and military pressure on Ukraine and once again questioning the country’s sovereignty, Washington and Berlin are sending the wrong signals to Moscow,” said Oliver Krischer, the vice-chairman of the party’s parliamentary group, as cited by Ukraine Business News.