KYIV – The U.S. Treasury Department on January 11 sanctioned several Ukrainian individuals and entities linked to a Verkhovna Rada lawmaker that a Washington intelligence agency says is a Russian agent who allegedly attempted to influence the 2020 U.S. presidential election.

Joining lawmaker and suspected Russian agent Andriy Derkach, who does not belong to a political party, on the department’s “Specially Designated Nationals List” is Oleksandr Dubinsky, who leads the party Servant of the People. 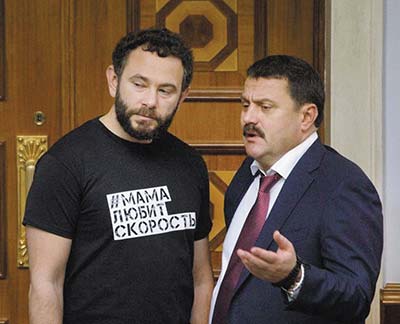 Oleksandr Dubinsky (left) and Andriy Derkach in the legislative chamber of the Verkhovna Rada.

Andriy Telizhenko, a former diplomat who briefly worked at the Ukrainian Embassy in Washington, was included on the list, as were former high-level prosecutor Kostyantyn Kulyk and fugitive ex-lawmaker Oleksandr Onyshchenko.

The four allegedly “have publicly appeared or affiliated themselves with [Mr.] Derkach through the coordinated dissemination and promotion of fraudulent and unsubstantiated allegations involving a U.S. political candidate,” the Treasury Department said in a news release.

It further said that “they have made repeated public statements to advance disinformation narratives that U.S. government officials have engaged in corrupt dealings in Ukraine.”

In a separate statement, Secretary of State Mike Pompeo said that Mr. Derkach “has been an active Russian agent for more than a decade, maintaining close connections with Russian intelligence services.”

A graduate of the Soviet Union’s KGB academy, Mr. Derkach was sanctioned in August for “spreading claims about corruption – including through publicising leaked phone calls – to undermine former Vice-President Biden’s candidacy and the Democratic Party,” Director of the National Counterintelligence and Security Center (NCSC) William Evanina said in a news release at that time.

Mr. Derkach has rejected the sanctions imposed on him as part of “Ukraine being managed by foreign actors.”

Four websites were also sanctioned and labeled “media front companies in Ukraine that spread disinformation.” All are tied to Mr. Derkach.

Mr. Giuliani’s last known trip to Ukraine was in December 2019.

Messrs. Derkach, Dubinsky, Onyshchen­ko, and Telizhenko reportedly fed the attorney unfounded allegations against U.S. President-elect Joe Biden when he was running for office and helped construct a baseless counter-narrative that it was Ukraine, rather than Russia, that interfered in the 2016 U.S. presidential elections and hacked the Democratic National Committee.

Mr. Giuliani embarked on the campaign amid Mr. Trump’s first impeachment trial for alleged abuse of office, which stems in part from a phone call in which he prodded Mr. Zelenskky to investigate Mr. Biden and his son, Hunter Biden, for alleged corruption. At the time of the call, Mr. Trump’s administration was withholding millions of dollars in military aid to Ukraine that Congress had approved in Kyiv’s fight against Russian-led forces in the two easternmost regions of the country.

In September, a Senate committee probe into the allegations found no evidence of wrongdoing with regard to Hunter Biden’s paid role for sitting on the board of a controversial Ukrainian energy firm when his father served as vice president.

Mr. Zelenskyy hasn’t commented on the new sanctions given that a lawmaker from his party was included on the list.

The Ukrainian president’s chief of staff, Andriy Yermak, tweeted that “for the sake of clarity – regardless of party affiliation, this administration will do everything in its power to hold [accountable] those responsible for meddling in U.S. elections.”

In a Facebook post, Mr. Dubinsky asserted that “once again, I declare that I have never interfered in the elections of other countries, including the American elections.”

After the latest round of U.S. restrictive measures, three Ukrainian lawmakers have now been sanctioned. Pro-Russian lawmaker Viktor Medvedchuk was blacklisted in 2014 for his role in Russia’s forcible takeover of the Ukrainian territory of Crimea, which occurred that same year.

Russian President Vladimir Putin is the godfather to one of Mr. Medvedchuk’s daughters and the politician has visited the Kremlin leader numerous times, traveling on direct Kyiv-Moscow flights in contravention of Ukrainian law.

“This highlights the difficulty of Kyiv’s position,” wrote Anders Aslund, a senior fellow at the Washington-based Atlantic Council. “How can these three politicians remain members of the Ukrainian parliament at a time when a majority of their fellow MPs recognize that the country is at war with Russia? Why has Ukraine not expelled the three sanctioned MPs from parliament or attempted to prosecute them for their alleged involvement in Russian intelligence operations?”

All property and interests in property of the designated individuals and entities that are subject to U.S. jurisdiction have been frozen, “and U.S. persons are generally prohibited from engaging in transactions with them,” according to the Treasury Depart­ment.