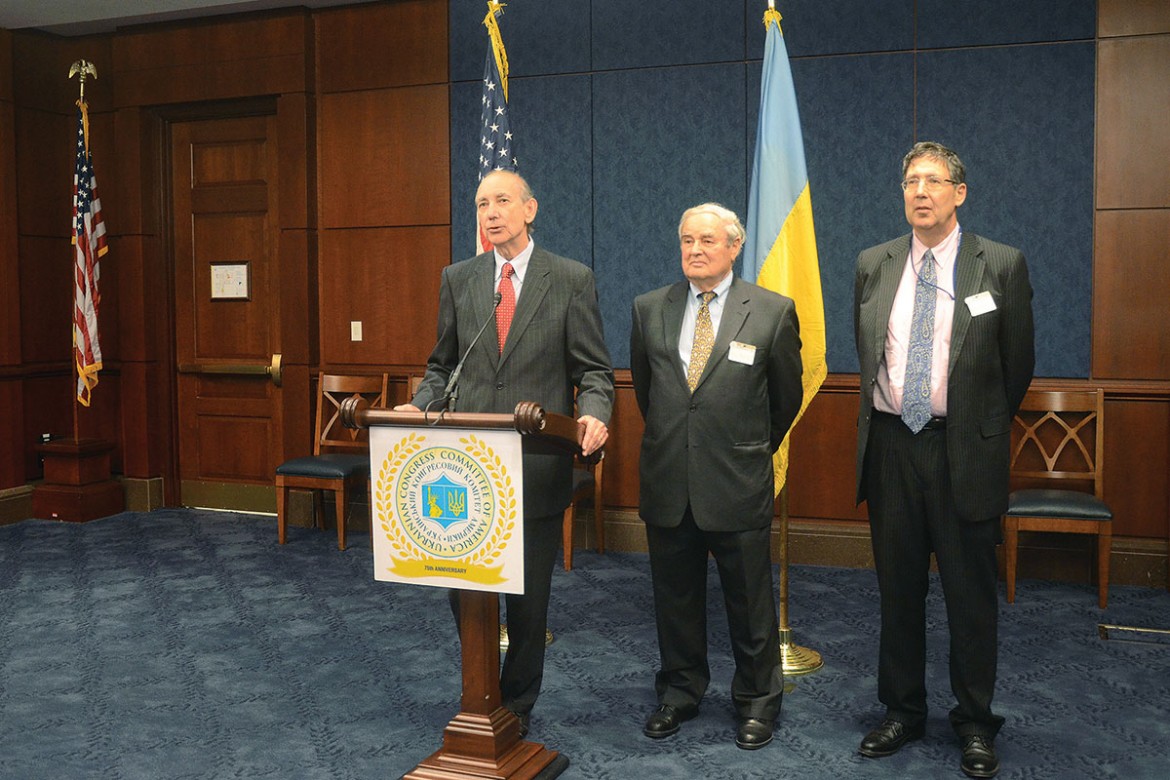 Three former U.S. ambassadors to Ukraine – Roman Popadiuk, William Green Miller and John Herbst – share their ideas about what the UCCA and the United States can and should do to help Ukraine today.

WASHINGTON – The Ukrainian Congress Committee of America (UCCA) celebrated the 75th anniversary of its founding with a reception on May 20 at the Senate Visitor’s Center at the U.S. Capitol, where U.S. and Ukrainian government representatives joined with a large group of representatives of Ukrainian American organizations and the Ukrainian Catholic and Orthodox Churches to mark the occasion.

As they praised and thanked the UCCA for the positive work it has done since its founding in 1940 for the benefit of its community, Ukraine and the United States, much of the focus of remarks by speakers, including five members of the U.S. Congress, was also on what the United States and other Western countries are and should be doing to help Ukraine during its current crisis with Russia.

The first congressman to address the gathering, Rep. Michael Turner (R-Ohio), who chairs the House Armed Services Subcommittee on Tactical Air and Land Forces, put it this way: “I appreciate you being here. I appreciate your strong voice for Ukraine, and I appreciate also the opportunity to stand with you in support of a country, that like all countries, deserves territorial integrity, freedom and the ability for self-determination.”

Similar expressions of support were made by the four other U.S. representatives participating in the event: Bill Pascrell Jr. (D-N.J.), Paul D. Tonko (D-N.Y.), Brendan Boyle (D-Pa.) and Robin Kelly (D-Ill.). Rep. Kelly also mentioned and delighted many attending the reception by noting that she, too, has Ukrainian roots. Her mother is half-Ukrainian, the daughter of Ukrainian immigrants to Pennsylvania, she said. 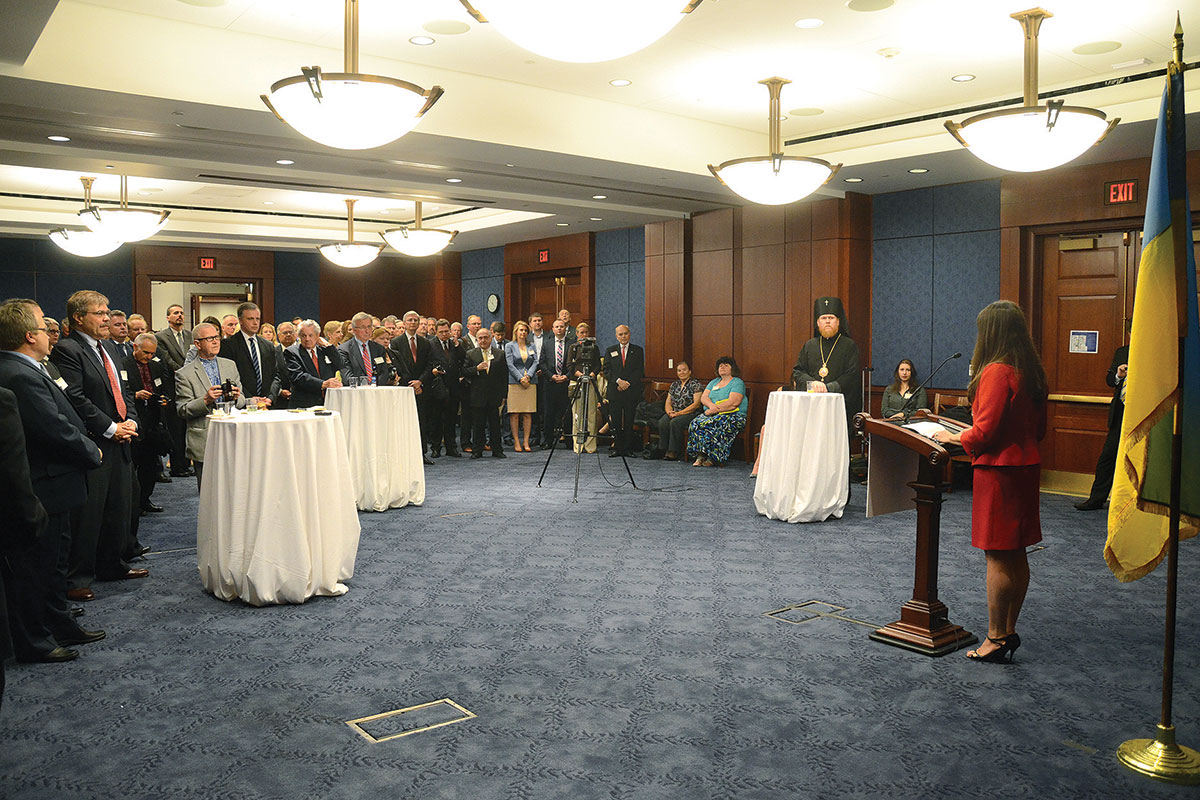 UCCA President Tamara Olexy speaks at the organization’s 75th anniversary event in Washington about the goals the UCCA set for itself in 1940 and what they are today given current developments in Ukraine. 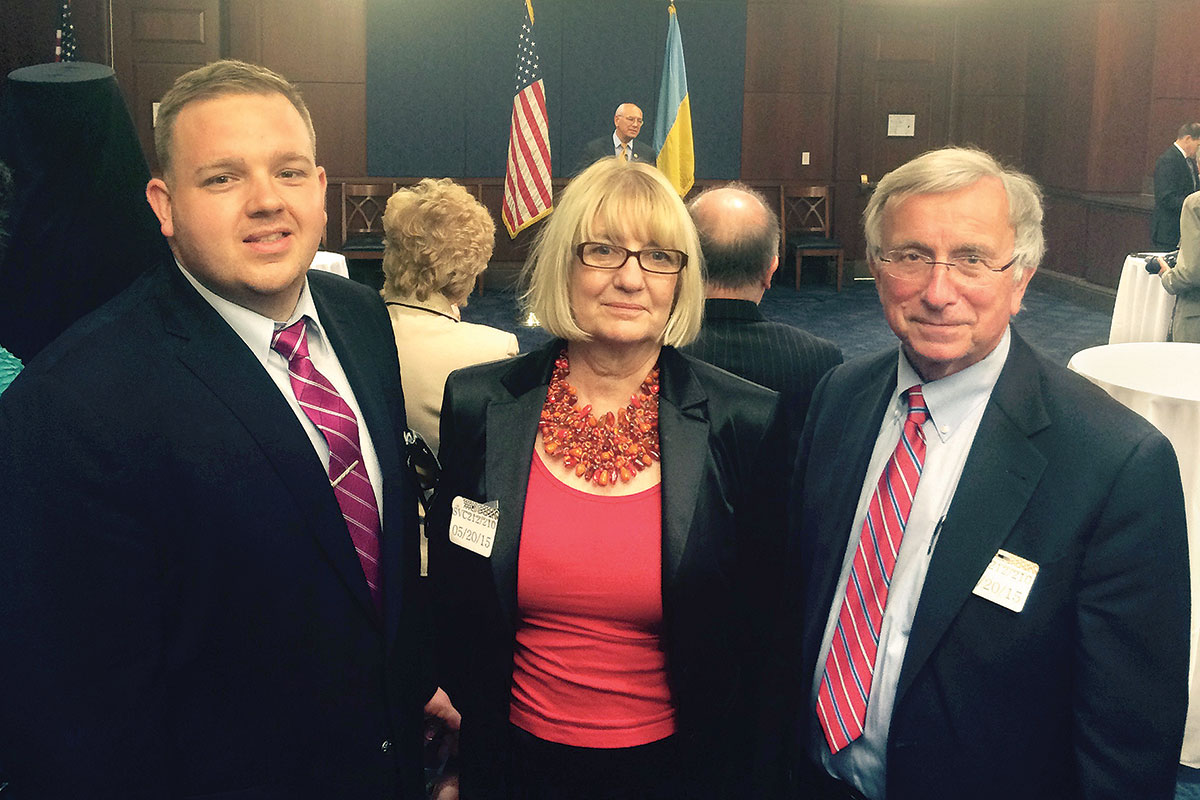 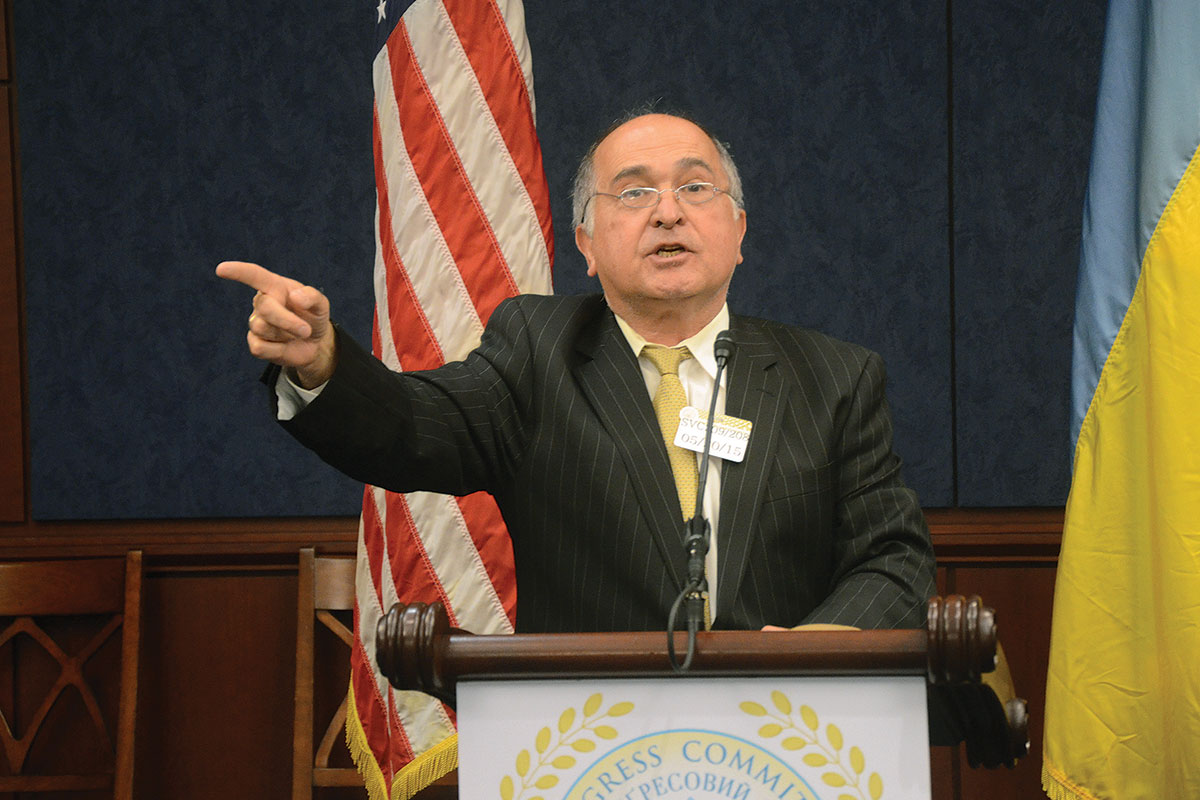 Askold Lozynskyj, who served as UCCA president in 1990-2000, discusses the organization’s role in the past and the future. 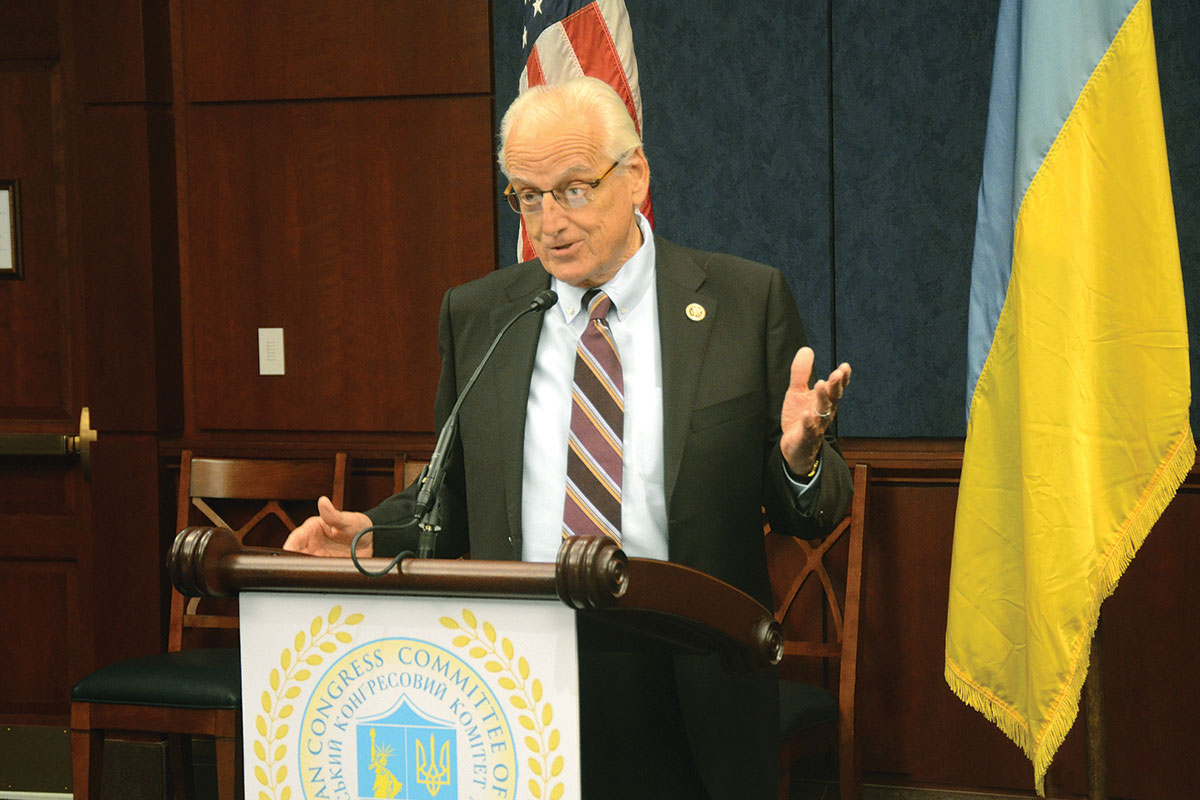 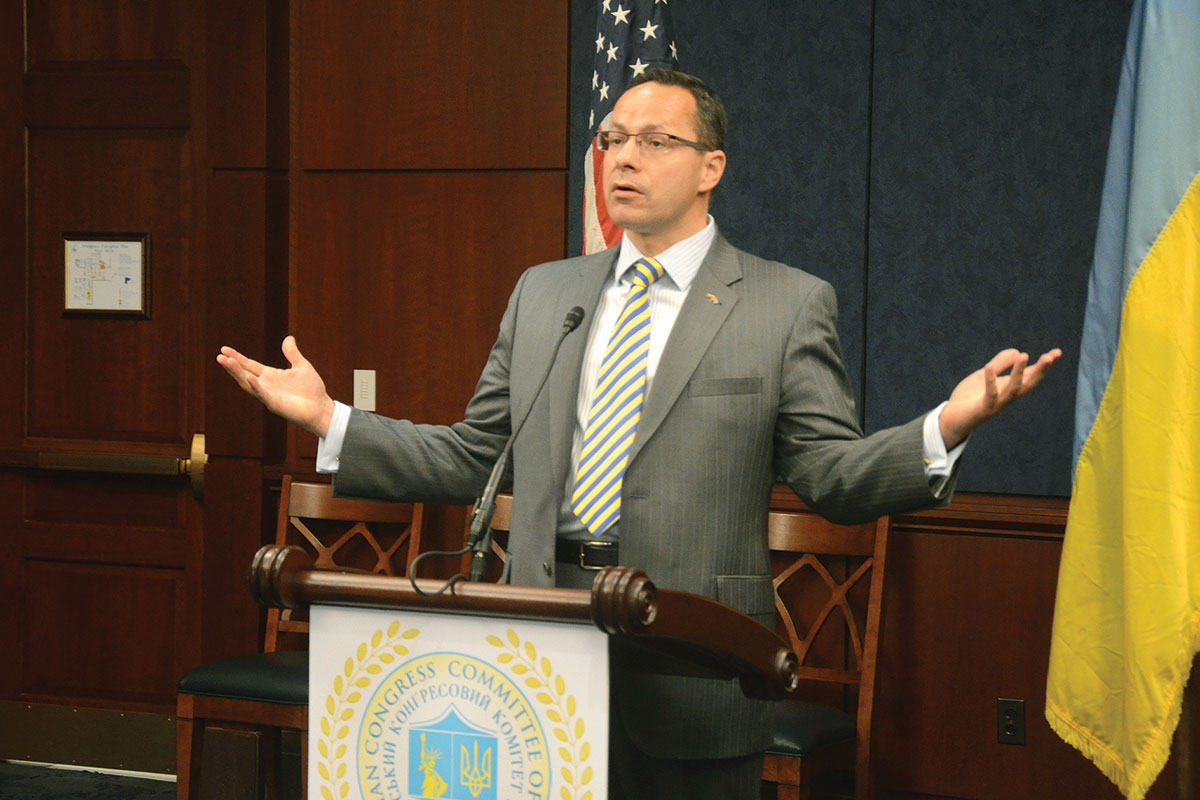 Ambassador Zygimantas Pavilionis of Lithuania says he wants Western powers to help Ukraine defend itself against Russian aggression “now, and not when it’s too late.”

UCCA President Tamara Olexy, in her remarks, read the proclamation of the UCCA’s founding which underscored the rights of Ukrainians to a “free and independent national existence, and to declare that the Ukrainian people will never cease in their centuries-old struggle until they have achieved the establishment of a free and democratic state of Ukraine.”

“The founders of the UCCA were individuals with a noble cause, a cause greater than themselves: freedom for Ukraine and her people,” she said, adding, “And they were determined to find the strength and perseverance to make all Ukrainian American organizations under one umbrella organization, thereby establishing the UCCA.”

She pointed to a number of the organization’s accomplishments through the years: publishing the English-language scholarly journal The Ukrainian Quarterly, establishing the United Ukrainian American Relief Committee, getting Congressional approval for building the Taras Shevchenko monument in Washington, fighting against Soviet human rights violations, securing the passage of the Captive Nations Week Resolution and bringing about the establishment of the Congressional Ukrainian Caucus, among other achievements.

“Many milestones have been reached, and we applaud the many achievements over the past 75 years, but the work of the UCCA is not yet complete,” Ms. Olexy said. “Today, Ukraine stands at the front line in the defense of democracy. The risk to the greater democratic world could not be higher than the ongoing aggression by the Russian Federation and its proxies against Ukraine’s territorial integrity.”

The original words of the UCCA founders’ preamble still ring true today, she said, as Ukraine continues its age-old struggle to secure its sovereignty and maintain its territorial integrity. “We must remain steadfast in our support for Ukraine and continue to be guided by the mission of our founders: to inform the world about the truth about Ukraine, to maintain and support our unique Ukrainian heritage, to represent the interests of our Ukrainian American community, and to honorably serve our new homeland – the United States of America.”

Eugene Czolij, current president of the Ukrainian World Congress, which represents Ukrainian organizations in 48 countries, praised and thanked the UCCA for its many valuable accomplishments since its founding in 1940.

The UCCA, he said, “has successfully coordinated and united several waves of Ukrainian immigrants in the United States as well as their descendants, representing their dreams, aspirations and efforts to be both a contributing community to the welfare of their country of choice – the United States – and to actively support Ukrainians in Ukraine to ensure that their spiritual homeland – Ukraine – becomes a fully independent, sovereign, democratic, modern European state.”

The organization has always defended subjugated nations in their struggles to overcome repressive, authoritarian regimes, he said. The UCCA “has spoken for dissidents whose voices have been silenced, and today actively builds a solid base of support among U.S. government officials and the American public for the vision of a new generation of Ukrainians in Ukraine that see their future in the community of free and democratic Western nations.”

Mr. Czolij said he was convinced that the UCCA will continue working hard to ensure that the 2014 Ukraine Freedom Support Act passed by Congress will be fully implemented and that the United States “effectively helps Ukraine defend not only its territorial integrity, but also our core values of democracy, self-determination of nations and fundamental human rights and freedoms which are being brutally challenged by Russia’s current authoritarian regime.”

Representing the Ukrainian government at the anniversary, Vice-Minister of Foreign Affairs Serhiy Kyslytsia read a letter from Foreign Affairs Minister Pavlo Klimkin, who praised the UCCA for its accomplishments and work for the benefit of Ukraine.

“We especially appreciate your support today in the times of aggression against the Ukrainian state, when thousands of Ukrainians took up arms to protect Ukraine’s freedom, unity and territorial integrity,” the minister noted.

The highest U.S. government representative at the event, Deputy Assistant Secretary of State Eric Rubin, also focused on what he termed this “truly important pivotal point in Ukraine’s history,” when for the first time since Ukraine’s independence a government is committed to reform and to put the country on the “path to a modern, democratic Western European future.”

“Are we doing enough?” he asked. “I’ll tell you candidly, it’s never enough and it isn’t enough. And those of us inside the government are doing our best to advocate for additional resources, for additional support.”

Also presenting their greetings to the UCCA were three of the former U.S. ambassadors to Ukraine who have remained active in Ukrainian affairs since departing Kyiv – Roman Popadiuk, William Green Miller and John Herbst.

Among the foreign government representatives at the 75th anniversary event was the ambassador of Lithuania, Zygimantas Pavilionis, who has been outspoken about getting the Western powers united in their efforts to assist Ukraine in this time of need. And that, he said, would include providing Ukraine with lethal weapons assistance “now, and not when it’s too late.”

Representing the Georgian Embassy was its deputy chief of mission, Giorgi Khelashvili.

As Mr. Sawkiw noted at the conclusion of the reception, among those present at the event were: representatives from the offices of U.S. Reps. Marcy Kaptur (D-Ohio), Sander Levin (D-Mich.) and Mike Fitzpatrick (R-Pa.), the Embassy of Latvia, the Central and East European Coalition, Polish American Congress, Lithuanian-American Community, Joint Baltic American National Committee and Jewish American organizations. Also represented were the Open World, Open Society and Soros foundations, the American Foreign Policy Council and Atlantic Council think tanks, Ukrainian American credit unions, the Ukrainian National Association and other organizations.