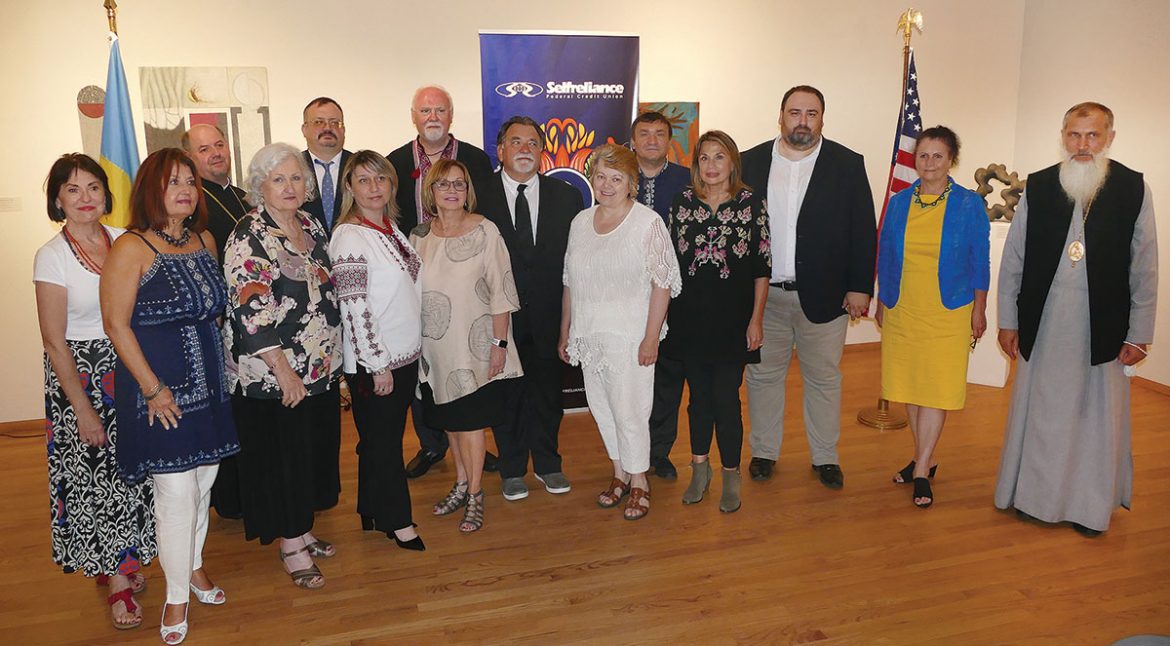 CHICAGO – Representatives of Ukrainian organizations in Chicago and the surrounding Illinois suburbs gathered at the Ukrainian Institute of Modern Art to celebrate the 25th anniversary of the ratification of Ukraine’s Constitution.

Participants in the celebration, which was initiated by the Illinois Division of the Ukrainian Congress Committee of America (UCCA), included Yevhen Hlibovytsky, lecturer at the Ukrainian Catholic University in Lviv and founder of pro.mova, a Ukrainian company that works to develop a long-term vision for Ukraine through media communications and business. 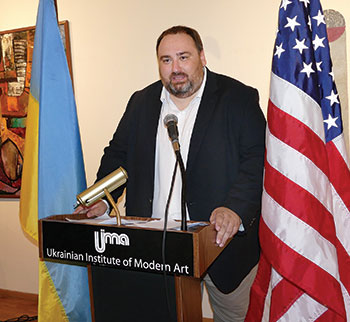 Yevhen Hlibovytsky, a lecturer at the Ukrainian Catholic University in Lviv, speaks during an event in Chicago commemorating the 25th anniversary of Ukraine’s 1996 constitution.

During their remarks on June 26, Messrs. Koledov, Hlibovytsky and Diaczun all noted that Ukraine has a history of numerous efforts to amend the Basic Law of Ukraine. The Russkaya Pravda (1017) was based on the Pravda of Yaroslav the Wise, which comprised regulations of feudal law along with regulations that could be traced back to the primitive communal system. It served as the legal code of Kyivan Rus and was remade during many centuries.

The Constitution of Hetman Pylyp Orlyk (1710) was a constitutional document, one of the first constitutional documents in Europe, that established the principles of the separation of powers in government between the legislative, executive and judiciary branches. The Constitution of the Ukrainian National Republic (1918), which was approved by the Central Rada but never promulgated, remains an important document from the period of the Ukrainian National Republic from 1917-1918.

Then, on June 28, 1996, following the relentless year-long leadership of Olek­sandr Moroz, the speaker of the Verkhovna Rada, Ukraine’s parliament adopted a new Constitution for the country. The Constitu­tion of Ukraine marked the beginning of the formation and development of Ukraine as a new democratic and independent state.

Constitution Day is celebrated throughout Ukraine as a national holiday on June 28.
Speaking during the event here, Mr. Koledov reminded everyone that in 1991, following the declaration of independence in Ukraine, “…the most important task was the adoption of a new Constitution.”

“This involved Ukrainian domestic and world experts, including a U.S. citizen of Ukrainian origin, federal judge Bohdan Futey. The four-year constitutional process took place during heated disputes that questioned the possibility of the adoption of a coherent progressive document which would lay the foundations of Ukrainian statehood,” Mr. Koledov said.

“It was extremely important that the adoption of the Constitution was carried out with the approval of its text by a constitutional majority of the legislature of Ukraine, in order to obligate elected members to accept their responsibilities before future generations. Elected officials approved the current Constitution with maximum good will, constructive cooperation and compromise,” Mr. Koledov said.

Mr. Hlibovytsky, the celebration’s keynote speaker, said that the adoption of the Constitution of independent Ukraine confirmed the age-old aspirations of the Ukrainian people for an independent and sovereign state with territorial integrity among other free nations of Europe and the world.

“The new basic law of Ukraine has absorbed the best modern examples of state-building, which are recognized at the international level,” Mr. Hlibovytsky said. “The Constitution of Ukraine is not perfect. Additions and changes will need to be made. We must remember that the Constitution is about the laws, regulations and commitment to obligations in advance of our future generations.”

Participants in the artistic program of the evening included: Victoria Hasko (My Ukraine), Mariya Bahriy (Prayer for Ukraine), Volodymyr Lymar (aria Misero Pargoletto), Yulia Perohozhuk (violinist, Melodiya; piano accompanist Oksana Pidruchna), Evanhelina But (pianist, In the Cherry Garden and Thorn Blossoms) and Vira Boychuk (Return to Me and Shoes). Oksana Chuyko organized the program and served as the master of ceremonies.

A reception organized by the staff of the Ukrainian Institute of Modern Art concluded the anniversary celebration.