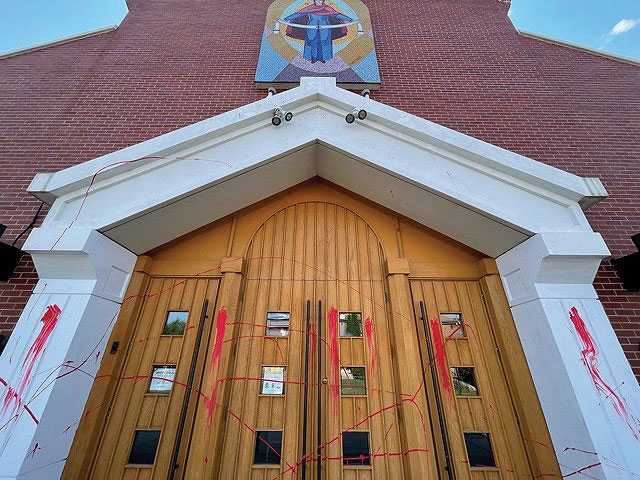 The outside of the Assumption of the Blessed Virgin Mary Ukrainian Catholic Church in Calgary was vandalized overnight between June 30 and July 1.

OTTAWA – The Ukrainian Canadian Civil Liberties Association (UCCLA) condemns the recent vandalism of two Ukrainian Catholic churches in Canada and wants these incidents to be investigated as hate crimes.

Overnight, between June 30 and July 1, the Assumption of the Blessed Virgin Mary Ukrainian Catholic Church in Calgary was vandalized with spray paint, and the property defaced. A memorial plaque that commemorates Canada’s first national internment operations was also defaced.

And on June 18 it was reported that a 100-year-old Ukrainian Catholic Church in Fisher Branch, in Manitoba’s Interlake region, was vandalized; windows were smashed and numerous items within the church were damaged.

Roman Zakluzny, chairman of the UCCLA, issued the following statement:
“What happened to indigenous peoples as a result of the residential school system is appalling and we support their efforts to secure a recognition for what they suffered. But to desecrate churches and frighten their peaceful congregants is appalling and must be investigated as a hate crime against an identifiable group, specifically Ukrainian Canadians. Those responsible for this vandalism are obviously ignorant – the Ukrainian Catholic Church is independent of the Roman Catholic Church and no parish of our Ukrainian Catholic Church in Canada was ever involved in the creation, management, or functioning of any of the residential schools in this country.

“The UCCLF [Ukrainian Canadian Civil Liberties Foundation] placed more than 100 plaques across Canada, like the one defaced in Calgary, to commemorate Canada’s first national internment operations of 1914-1920, whose victims were mainly Ukrainians and other Europeans. The systemic racism our community suffered resulted in thousands of innocents being jailed, then forced to do heavy labor for the benefit of their jailers, all across Canada. The irony is that this plaque, memorializing this dark chapter in Canada’s history, was also defaced by those whose appreciation of the history of this country seems rather purblind.

“The Ukrainian Canadian community wants the federal government to help restore the burial sites of all the victims of Canada’s first national internment operations. An internee cemetery established at Spirit Lake, in Quebec’s Abitibi region, by Ottawa’s men, holds the remains of at least 16 internees, including children, although the whereabouts of at least one child, Nellie Manko, remain uncertain. Despite repeated requests from the Ukrainian Canadian community for government assistance in restoring, properly marking and hallowing this unique historical site, no action has been taken. Why should this internee cemetery be forgotten? This internee cemetery is rapidly deteriorating and will soon vanish into boreal forest. That is unacceptable.

“Now that a $27 million federal fund has been established to locate, restore and properly commemorate burial places where those innocent of any wrongdoing were buried, the UCCLA is again asking the federal Heritage Minister, the Honorable Steven Guilbeault, to address our concerns with respect to the Spirit Lake internee cemetery, to ensure that this site is properly protected and the remains of those buried there are not lost to indifference, ignorance or prejudice. Ukrainian Canadian victims of unjust federal policies and decisions are no less worthy of being remembered than those who suffered similar indignities, regardless of race, creed or color.”