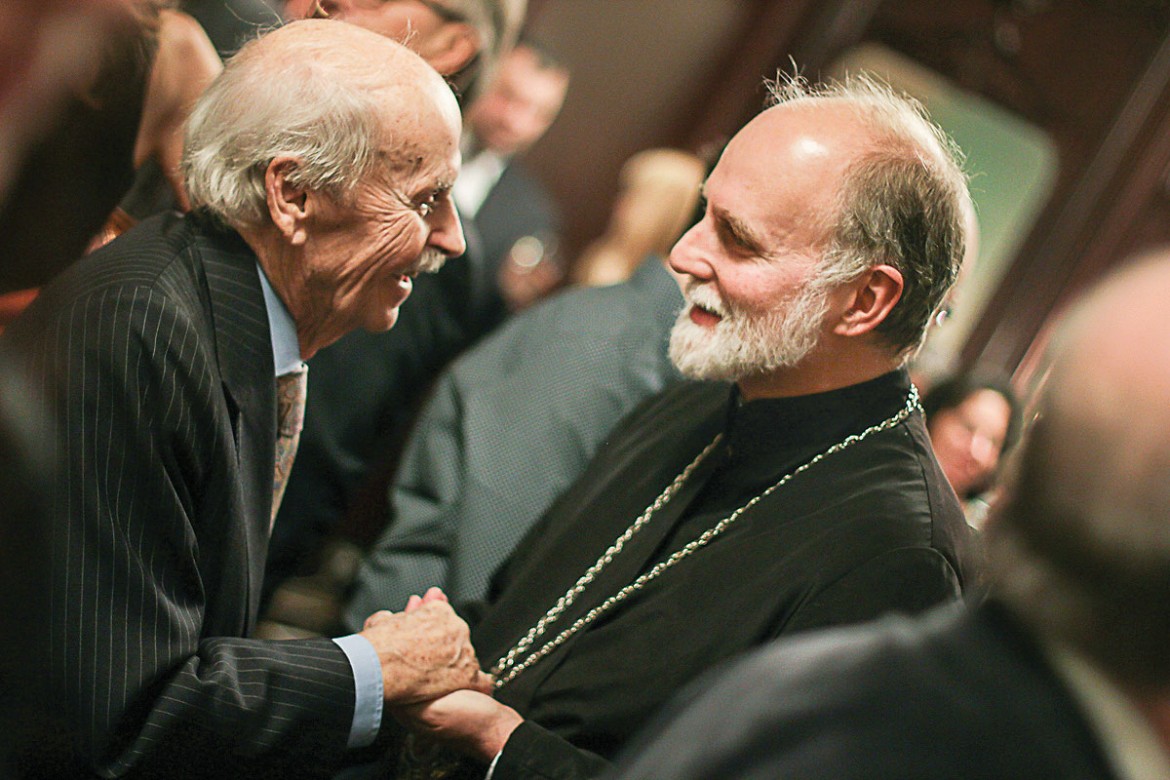 Dr. Bohdan Hawrylyshyn, founder of the Institute of International Management in Kyiv, greets Bishop Borys Gudziak, primate of Ukrainian Catholics in France, the Benelux and Switzerland, at the eighth annual Ukrainian Catholic University Charity Evening and Silent Auction in Kyiv.

What began as a modest get-together of mostly diaspora and native Lviv professionals in Kyiv has swelled to become among the most well-attended and highly sought-after charity events in the capital city – so much so that demand exceeded available tickets.

The evening’s emcees were television star and Ternopil Oblast native Serhiy Prytula, who passed the microphone for part of the evening to UCU founder and former rector, Bishop Borys Gudziak of St. Volodymyr Eparchy in Paris, who called upon the guests to make a pledge this holiday season.

“Do we have the right to complain?” Bishop Gudziak asked rhetorically. “We can walk for ourselves, see for ourselves. And beside us are our brothers and sisters injured by the war, who don’t have that ability. We are all tired. We ask, how long are we supposed to wait? A little more. I want to ask everyone to promise yourselves to not complain from now until Christmas. Don’t complain and bless others. Trust me that you will uncover a new wife, husband, parents, friends.” 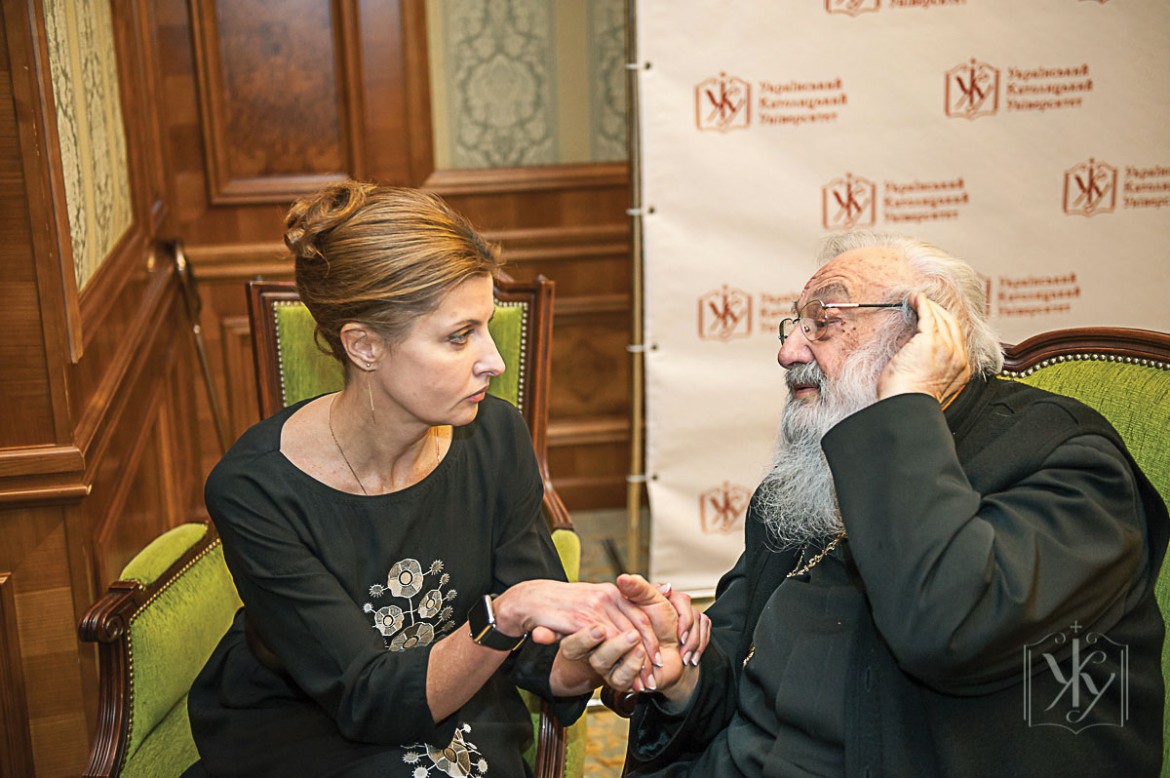 More than 330 Kyiv professionals and dignitaries raised more than 4.5 million hrv (about $184,000) during the night, according to Vasyl Myroshnychenko, the head of the evening’s organizational committee. As a result, 40 new scholarships emerged, covering education and residential costs.

Of that total, 2.64 million hrv (about $108,000) was raised for academic scholarships, while the remainder will be earmarked for the comprehensive campaign that was launched in 2010. Since then, $58 million has been raised out of a total of $65.5 million that is targeted for the end of December 2016.

The evening’s biggest donation was made by Viktor and Iryna Ivanchyk, who launched the Povir u Sebe (Believe in Yourself) Fund in 2009 to help rural Ukrainian schoolchildren pay for higher education. They pledged $30,000 for 10 scholarships. Afterwards, they pledged another $30,000 for 10 more scholarships (which was in addition to the aforementioned total for the evening).

Mr. Ivanchyk, the chief executive officer of Astarta-Kyiv, Ukraine’s largest sugar producer, is a native of a village in the Poltava Oblast and was awarded the Order of Nestor the Chronicler, first degree, in 2010 by the Ukrainian Orthodox Church – Moscow Patriarchate. 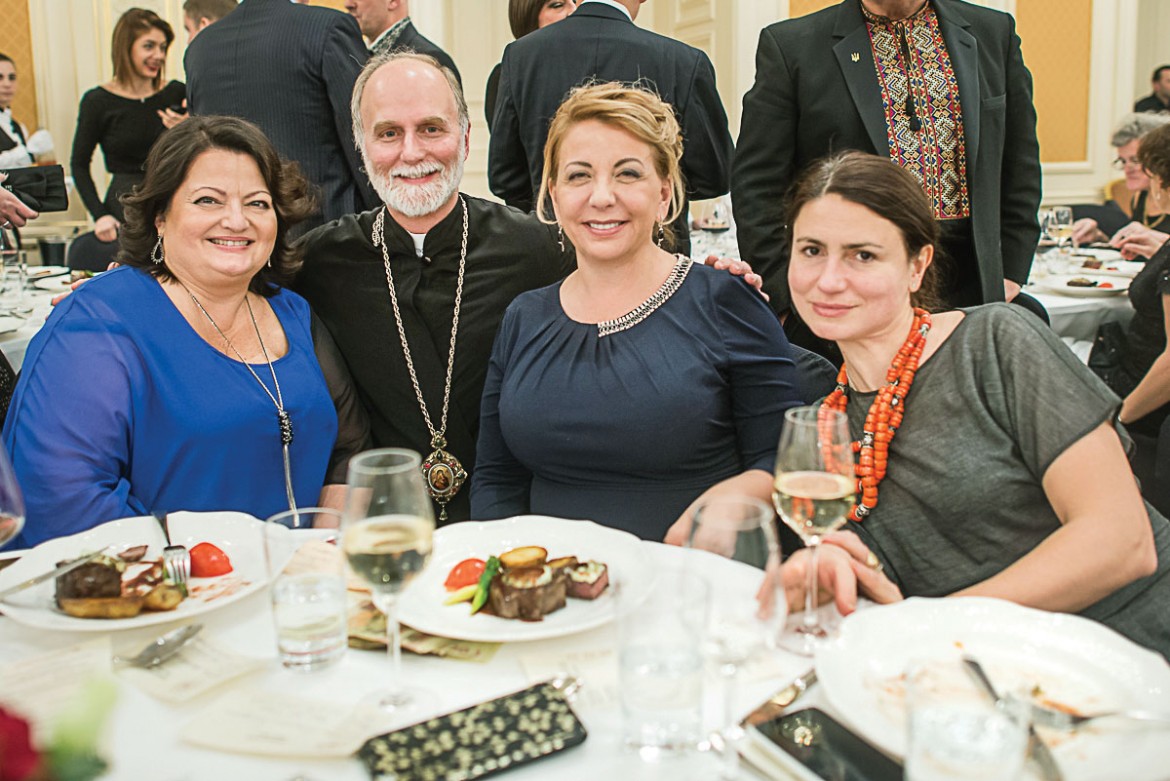 The biggest draw of the silent auction was the painting “Lialka Opovyta” (The Shrouded Doll) by Mykola Malyshko, which was acquired by Hlib Zahorii and Kateryna Kotenko for $4,500.

The evening featured a performance by TIK, which performed its song dedicated to the volunteers in the anti-terrorist operation (ATO), “The Smell of War.”

Most of these guests stayed the full duration of the event, while those like Ms. Jaresko – who was in the midst of critical budget talks – had to leave the event before returning again.