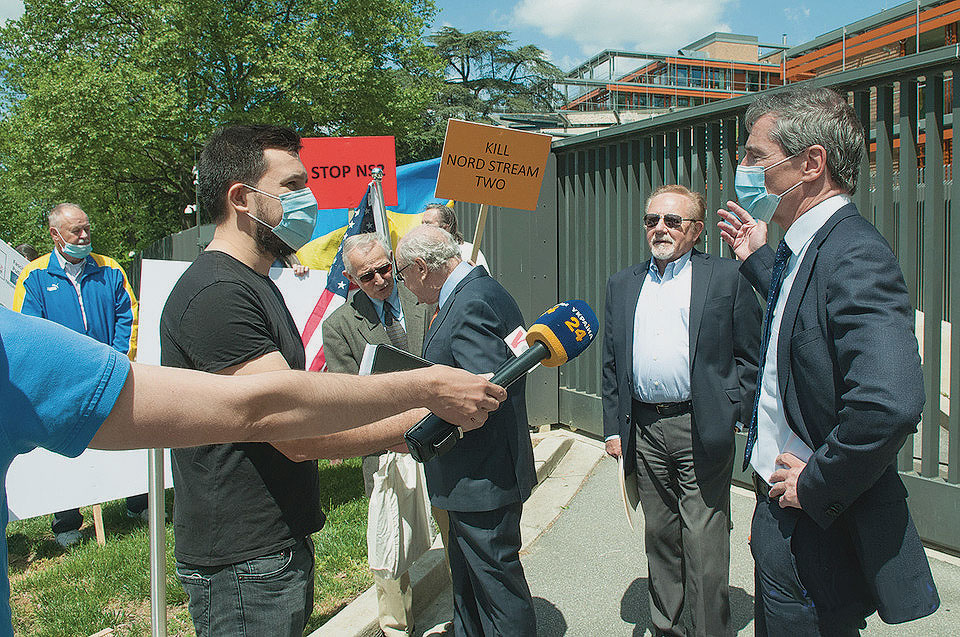 Ukrinform correspondent Yaroslav Dovgopol interviews a German Embassy employee as Zenon Stakhiv (second from the right) listens to the discussion.

WASHINGTON – Members of Ukrainian diaspora communities in Australia, Canada, the United States, France and Germany held protests on April 30 in front of German embassies and consulates in order to voice their opposition on completion of the Nord Stream 2 pipeline.

The protesters gathered in front of German embassies, consulates, as well as in Berlin, where they delivered letters to German Chancellor Angela Merkel. The letters asked her to stop construction of the pipeline, calling it a Trojan Horse.

The idea for the demonstration and delivery of the letter was born two weeks earlier on a tennis court in the suburbs of Washington. The American tennis-playing group, which began calling themselves The Coalition Against Putin’s Neo-Fascism, gathered a worldwide like-minded following.

In Paris, Irene Witochynsky organized a group of five protesters, while in Berlin Luba Pokotylo, a Ukrainian activist, took similar action aided by support from Ukraine’s Ambassador to Germany Andriy Melnyk. In Canada, the ad hoc group was organized by Oksana Bashuk Hepburn, the daughter of a Ukrainian incarcerated in Auschwitz during World War II.

In Ottawa, the protests included the Hon. David Kilgour, a nominee for the Nobel Prize; Vicki Karpiak, daughter of Canadian Sen. Paul Yuzyk; and Olya Moscicky.

“Australia’s Ukrainian community leadership presented letters to representatives of the German government in Australia calling on Chancellor Merkel to stop Nord Stream 2, requesting the letters be passed onto Chancellor Merkel via diplomatic channels.”

Bohdan Wolodymyriw, president of the Ukrainian Council of NSW, and Leshia Bubniuk, the public relations officer for the Ukrainian Women’s Association, visited the office of Germany’s consul general in Sydney to deliver the letter.

Slavko Kohut, president of the Associa­tion of Ukrainians in Victoria (AUV), visited the honorary consul of Germany in Melbourne, Michael Pearce, and delivered the letter.
The Australian Federation of Ukrainian Organizations (AFUO) sent a copy of the letter to the German ambassador in Canberra. 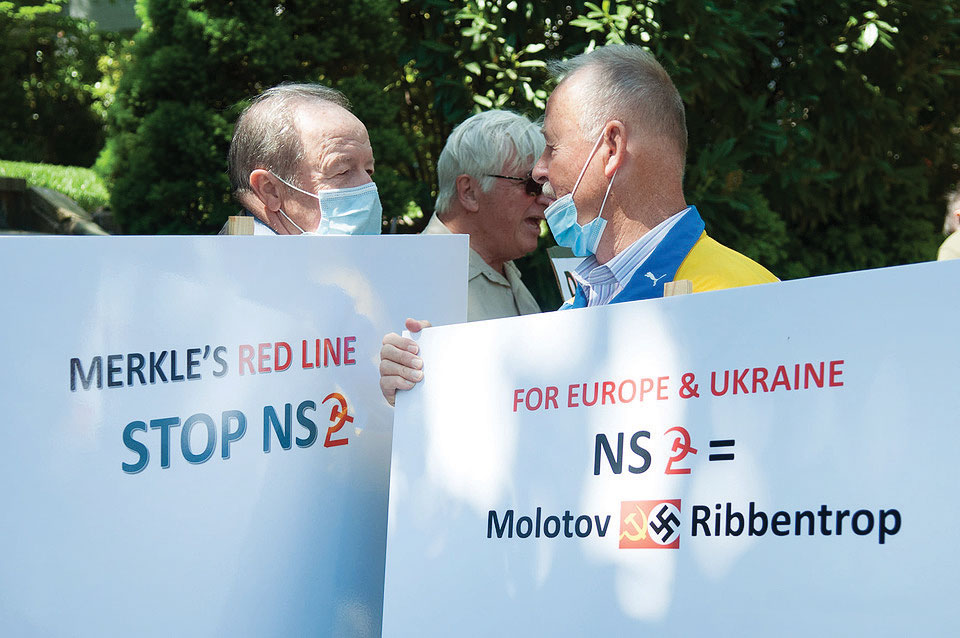 Ukrainian American demonstrators gathered in front of the German Embassy in Washington to protest completion of the Nord Stream 2 pipeline.

Mr. Romaniv also noted that Paul Grod, president of the Ukrainian World Congress, wrote in the Kyiv Post that, “the completion of Nord Stream 2 is a serious threat to peace and security in Europe … Russia’s continued intimidation, deceit and disregard for international law demonstrates that its leadership cannot be trusted and must be contained.”

At the German Embassy in Washington, the event was covered live by Ukrainian TV and Ukrainform via their correspondent Yaroslav Dovgopol.

Reflecting on the results of their ad hoc effort, the three principal mainstays of the group, Jaroslaw Martyniuk, Zenon Stakhiv and George Woloshyn, said they were both surprised and pleased that their spur-of-the-moment effort to protest construction of the Nord Stream 2 pipeline gained international support.

The organizers also welcomed the support of Ed Skibicki, who founded the Facebook group “1,000,000 people around the world in support of Ukraine’s fight for freedom.” Mr. Skibicki not only drove down with his family to participate in the protest in Washington, but he also set up Zoom calls to help organize the demonstrations.
Mr. Martyniuk said he was pleased with the results and encouraged that the group had gained supporters.

“It appears that now we have some powerful allies in our effort to stop Nord Stream 2. Our initiative could be the proverbial straw … that breaks the camel’s back,” Mr. Martyniuk said.

He added that, “our cause is helped by the fact that on May 3 the Nature and Biodiversity Conservation Union filed a lawsuit.” The lawsuit is “against the continued construction of the pipeline, demanding that the Federal Maritime and Hydrographic Agency (BSH), which earlier had granted Nord Stream 2 a permit on January 14 to continue construction in German waters only until the end of May, compensates the damage to marine ecosystems caused by the construction.”