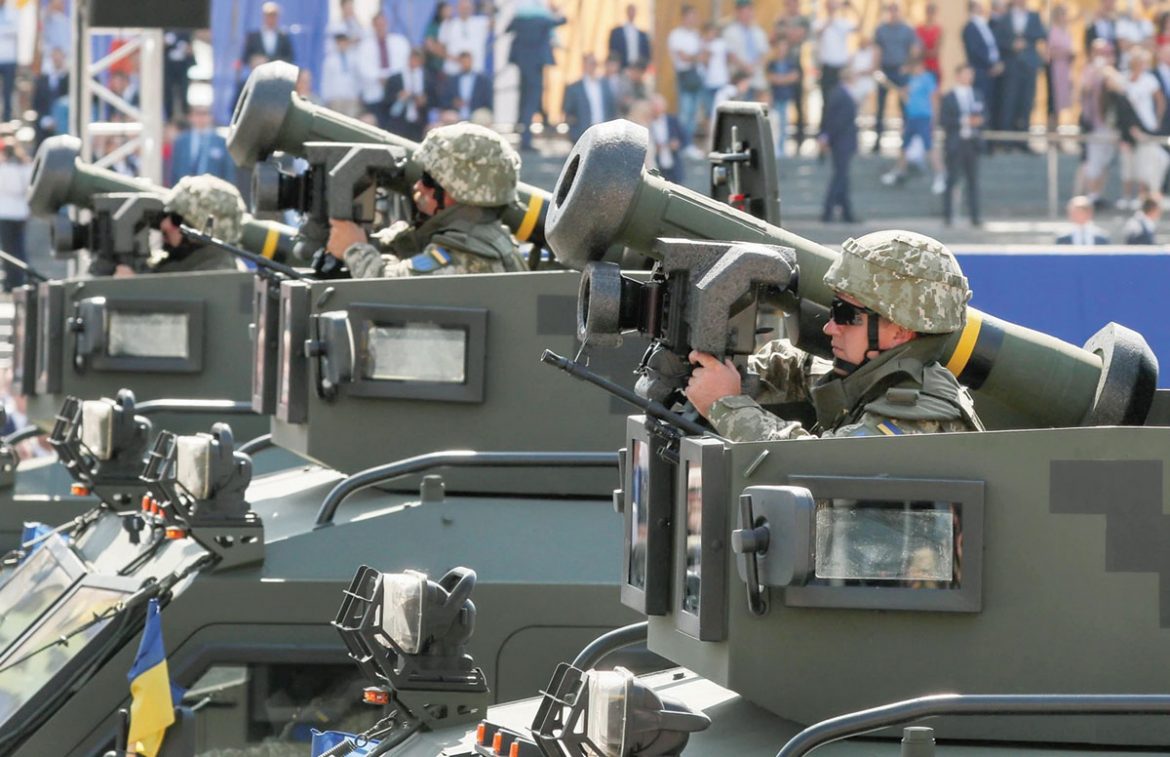 KYIV – Territorial defense units have been called up in Ukraine’s southern regions as President Volodymyr Zelenskyy has urged NATO to accelerate his country’s bid to join the defensive military alliance amid a massive mobilization of Russian troops near the state border.

On April 6, units were scrambled for drills in regions situated along the administrative border with Russia-occupied Crimea and the Black Sea coastline that could be vulnerable to amphibious and land attacks by Russia’s military.

About 100,000 Ukrainian reservists are attached to 25 territorial defense units that are subordinate to the Armed Forces’ leadership. The military’s southern command encompasses five regions: Odesa, Kherson, Mykolayiv, Kirovohrad, and Vinnytsia.

The call-up comes as Russia continues mobilizing thousands of military personnel and hardware along Ukraine’s state border in the east, south and north, raising the specter of high-intensity fighting re-emerging in a smoldering war that is entering its eighth year.

A new Russian military field camp was allegedly located as close as 153 kilometers (93 miles) from the northern border of Ukraine’s Luhansk Oblast, a Moscow-based open-source research group found. The group’s findings can be viewed online at https://citeam.org/ru-military-camp-near-ukraine.html?2.

Using images and videos posted on social media, the Conflict Intelligence Team says it found a new army camp 250 kilometers (155 miles) by car from Ukraine in Russia’s Voronezh region. Another camp was found closer to Ukraine, “possibly near the town of Ostrogozhsk” in the same region, CIT reported.

On April 8, Reuters also reported that Russia’s defense ministry said it was “moving more than 10 navy vessels, including landing boats and artillery warships, from the Caspian Sea to the Black Sea to take part in exercises.”

After Russia forcibly seized Crimea in early 2014, Kyiv cut off key water supplies to the peninsula and it has experienced water shortages and draught.

Ukrainian and Western military experts, including former commanding general of the U.S. Army Europe Ben Hodges, have posited that Russia’s next offensive could focus on creating a land bridge to Crimea by seizing the key ports of Mariupol, Berdyansk and Odesa, essentially cutting Ukraine off from the Black Sea.

Mr. Zelensky, meanwhile, used the 72nd anniversary of NATO’s founding on April 4 as an opportunity to call on it to expedite Ukraine’s accession to the alliance.

In a phone call with NATO Secretary-General Jens Stoltenberg two days later, he said membership would prove to be a “powerful deterrent” to Russia.

“Reforms alone will not stop Russia,” Mr. Zelenskyy said. “NATO is the only way to end the war in the Donbas.”

Ukrainian Minister for Reintegration of the Temporarily Occupied Territories Oleksiy Reznikov stated in February that more than 14,000 people have been killed in the easternmost regions of Luhansk and Donetsk since Russia covertly invaded the area in early 2014.

Twenty-seven Ukrainian soldiers were killed in the war zone since January, including five in the last 72 hours as of April 8. Shelling by forces Russia commands and controls reportedly severed the water supply to around 50 towns and villages near the front line.

In response to Kyiv’s wish to join NATO, Kremlin spokesman Dmitri Peskov this week said that such rhetoric threatens to further destabilize the situation in Ukraine’s east.
He furthermore warned NATO of sending troops to help Ukraine.

“There is no doubt such a scenario would lead to a further increase in tensions close to Russia’s borders. Of course, this would call for additional measures from the Russian side to ensure its security,” Mr. Peskov said on April 2.

Regarding the amassing of troops and hardware near Ukraine’s border, Mr. Peskov insisted they were not threatening.

The U.S. hasn’t been convinced of Russia’s recent actions and wants additional explanation for the military maneuvers, which appear to be offensive in nature.

“We call on Russia to refrain from escalatory actions,” State Department spokesman Ned Price said in a news briefing on April 6. “We’ve asked Russia for an explanation of these provocations…But more importantly, what we have signaled with our Ukrainian partners is a message of reassurance.”

Monitoring of Russian media over the past week by Radio Free Europe/Radio Liberty concluded that Moscow is psychologically preparing the nation for war.

Russian state-run TV channels have been devoting their prime-time programs to Ukraine with the overall narrative being that Kyiv is preparing a military offensive to retake the occupied parts of Donbas.

“Is Ukraine about to start war?” one TV channel titled its program. Another program asked: “A second fratricidal war?”

Russia’s embassy in Australia also tweeted a false news story reported by state-run Tass news agency that said a 5-year-old child was killed by a Ukrainian drone strike in Donetsk. 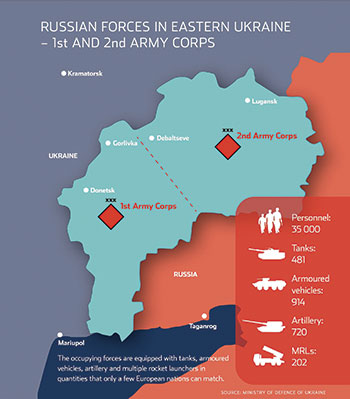 A map of the two easternmost Ukrainian regions of Donetsk and Luhansk.

This story was denied by Ukrainian officials and Kyiv-based media watchdog Stope Fake debunked the fake news in a researched analysis.

“The safety and the fate of the Russian citizens are certainly an absolute priority for the Russian state and President Putin personally,” Mr. Peskov told reporters on April 6 when asked what steps Russia would take to protect its citizens if tensions in Donbas escalate.

Mr. Reznikov also said in February that “about 400,000 people…in the occupied areas of Donbas” have been coerced into taking Russian citizenship. Compulsory “passportization” in Crimea has affected about 2.5 million Ukrainians, he added.

Ukraine’s Western partners, including the U.S., Britain, Canada, NATO and the EU have voiced support for Ukraine and concern over Russia’s troop buildup.

After Kyiv first announced it on March 30, U.S. President Joe Biden initiated a phone call with his Ukrainian counterpart for the first time since taking office.

The two held a 45-minute conversation on April 2 during which Mr. Biden “affirmed the United States’ unwavering support for Ukraine’s sovereignty and territorial integrity in the face of Russia’s ongoing aggression in the Donbas and Crimea,” the White House readout said.

After the phone call, Mr. Zelenskyy said in a video statement that “we discussed the situation in the Donbas in detail…President Biden assured me that Ukraine will never be left alone against Russia’s aggression.”

This week, the Ukrainian president also held phone conversations with his British and Canadian counterparts.

Separately, Mr. Zelenskyy told his British counterpart Boris Johnson that “Russia’s recent actions pose a serious challenge to the security of Ukraine, NATO member states and the whole of Europe.”

He also urged Britain, “along with other allies, to strengthen its presence in the region and increase sanctions pressure on Russia.”

In turn, Mr. Johnson’s spokesperson said “they discussed the U.K.’s significant concerns about the recent Russian military activity on Ukraine’s border and in illegally annexed Crimea.”

France and Germany, who both twice took part in brokering a cease-fire in Donbas that never firmly took hold, in a joint statement urged “all parties to show restraint and immediately deescalate.”

Retired U.S. Gen. Mr. Hodges criticized the statement for not identifying Ukraine as the victim of Russian military aggression.

“One of the most pathetic statements I’ve ever seen,” he tweeted on April 6. “To equate the Ukrainian side with the Kremlin’s aggression, by calling on both sides to ‘show restraint and de-escalate’ is disgusting. It’s like calling on the French Maquis to de-escalate against the Wehrmacht occupiers.”