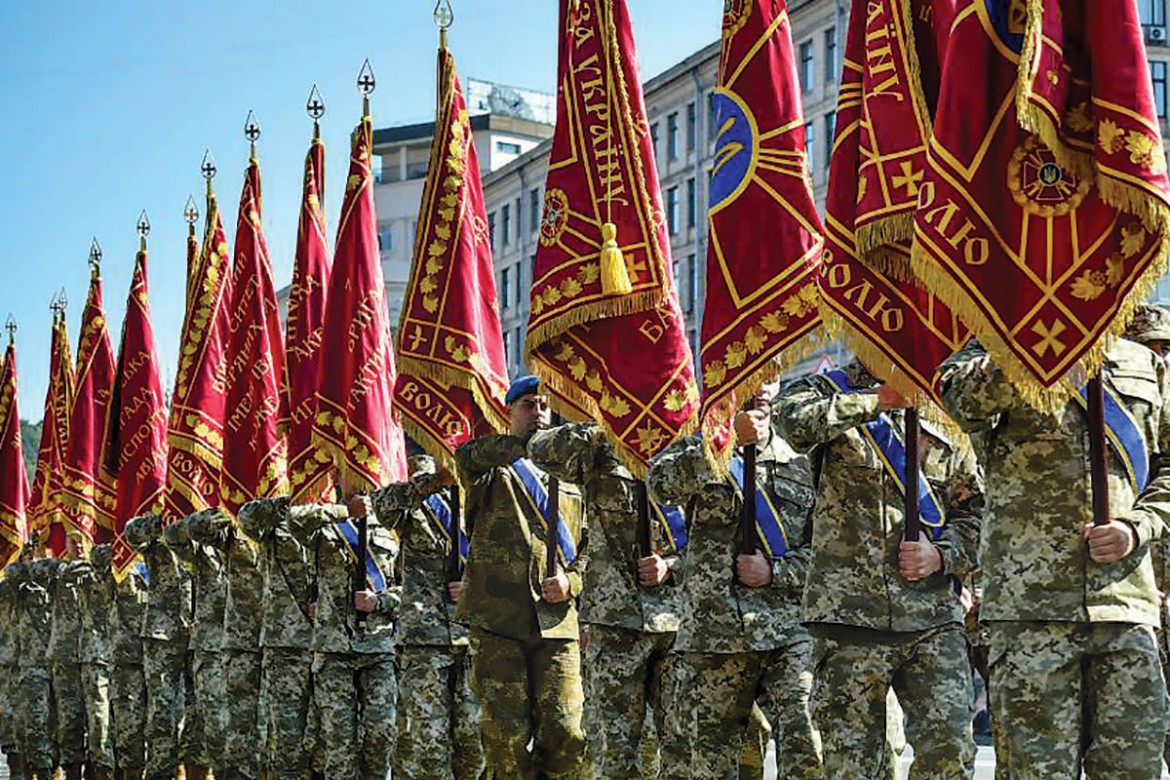 Flag-bearers of Ukraine’s fighting forces during the March of Independence on August 24 in Kyiv.

KYIV – The Ukrainian government commemorated the start of its 25th year of independence from Moscow on August 24 by hosting a march of the nation’s top soldiers along Kyiv’s main boulevard, Khreshchatyk, and awarding Anti-Terrorist Operation commanders honorary battle flags.

Though it dropped the display of armaments and hardware as was the case in the previous year’s Khreschatyk parade, the Ukrainian government emphasized the military theme, which remains relevant as Russian-backed terrorists continue to engage in daily attacks on Ukrainian military and civilian targets.

“It was you who made an attack deep into Ukraine impossible for the enemy, who – besides the Anschluss of Crimea and Sevastopol – tried, attempted and planned to annex at a minimum eight other Ukrainian regions in the framework of the so-called Novorossiya project,” Ukrainian President Petro Poroshenko said in a pre-Independence Day speech on August 22 to soldiers at the Chuhuyiv Airfield in the Kharkiv region.

“It was you who freed from the occupants a large part of Ukrainian Donbas and contained the fighters in the southeastern districts of these two regions [Donetsk and Luhansk]. It’s you who, in tightly closing off the fighting lines, are holding the defense against the aggressor with an impenetrable fortress. Thanks to you, the price of a likely Russian attack became so high that even the most intoxicated Russian minds sobered up. But that doesn’t insure us against a large-scale escalation of military activity in the east, the likelihood of which grows with Independence Day.” 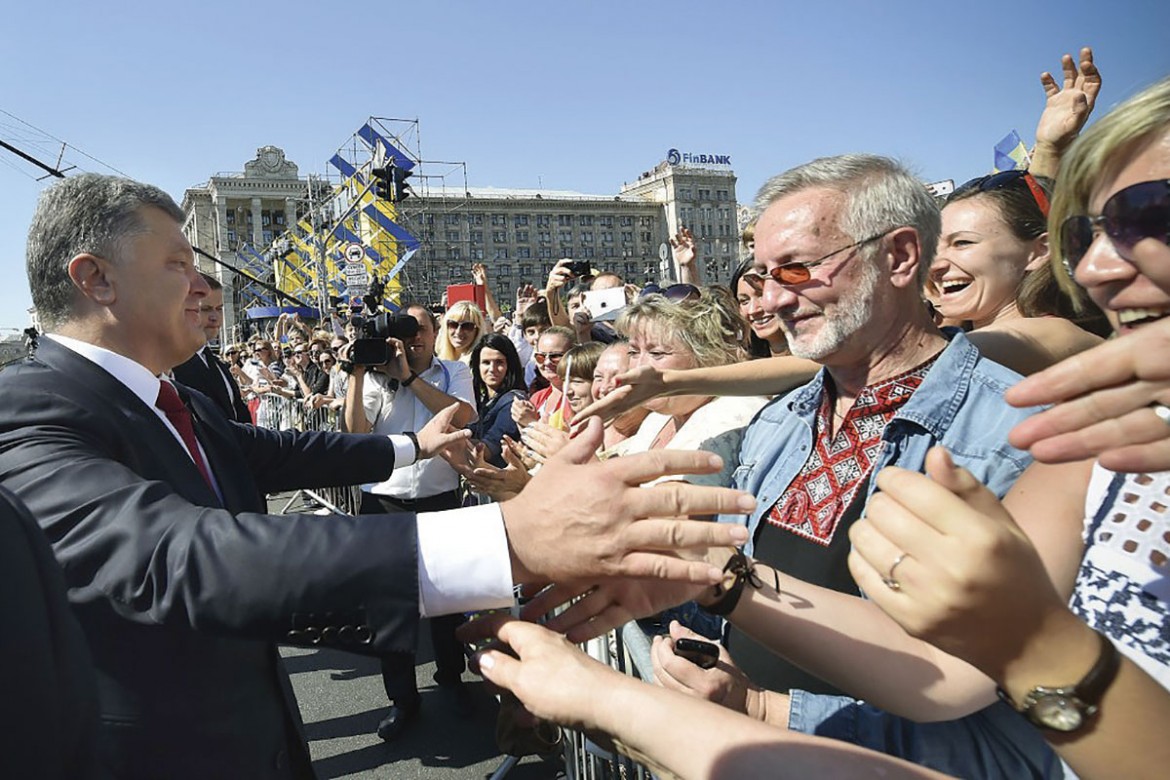 Speaking on August 24 during the March of Independence in central Kyiv, the president said: “Russian aggression has become a catalyst of our unity. We have been completely formed as a single Ukrainian political nation.” He emphasized that “today, we are stronger than yesterday. …We cannot be enslaved or broken. We were born free on our land. And we are ready to defend it until the end at any cost.”

“We have to walk through the 25th year of independence as if we are on a thin ice. We should understand: the slightest misstep can be fatal. The war for independence still continues. And one can win it by combining defensive efforts, diplomatic skills, political responsibility and iron self-control,” Mr. Poroshenko stated.

Moreover, Russia has moved beyond last year’s plans for a military victory towards politically undermining Ukraine, he noted.

“The enemy knows that we’re ready to retaliate and the cost of escalation will be too high for Russia,” the president said in his address on Independence Square. “That’s why it has an alternate strategy of shaking up the situation inside our country and to cause Ukraine to conflict with its key partners, leaving it on its own with the aggressor.”

Indeed, Ukraine is plagued by problems that have been caused or exacerbated by the ongoing war in the Donbas, which has resulted in nearly 7,000 deaths and more than 17,000 wounded since it erupted in April 2014, according to United Nations estimates released at the end of July.

The effect on the economy has been devastating – a fact confirmed by the second-quarter GDP, which plunged 14.7 percent from the same year-ago period after plummeting 17.6 percent in the first quarter.

These latest results encapsulate the Ukrainian economy as the worst performing in the world during the last 24 years, according to an article published on the gazeta.dt.ua news site on August 21 that was authored by Dr. Serhii Korablin, who has worked for the National Bank of Ukraine.

“With such dynamics, until the GDP reaches the level of 1990, Ukraine will remain on the God-forsaken edge of the global economy, far from its current neighbors, not being able to share their successes, plans or possibilities,” Dr. Korablin wrote.

On the political front, the government remains plagued by rivalries among competing clans. Some of Ukraine’s biggest oligarchs – including Rinat Akhmetov and Victor Pinchuk – held a meeting on August 1 at the Hyatt Regency Kyiv to discuss ways to regain the influence they lost when the Party of Regions was dissolved, National Deputy Serhiy Leshchenko reported on his pravda.com.ua blog on August 4.

Meanwhile, reports continue to surface on a monthly basis of businessmen aligned with Prime Minister Arseniy Yatsenyuk competing with those aligned with Mr. Poroshenko for state assets and revenue streams.

“Halfway reforms, delays, the lack of courage, sabotage and corruption are leading towards painful consequences,” Mr. Leshchenko wrote. “And the announced ‘deoligarchization’ will spill into a banal redistribution of ownership and ‘neo-oligarchization.’ That will either be the ‘old oligarchs,’ who will concentrate on a new project and re-establish their influence, or the ‘new oligarchs,’ who in declaring their fight against the old ones will tightly stuff their pockets, and then, afterwards, shielding themselves from revenge, begin to defend their gains through politics. In any case, this will all end badly.”

Yet the president indicated in his August 24 remarks that his top political concern is with the Pravyi Sektor, Ukraine’s largest independent military force, which he continued to accuse of unwittingly playing into the hands of the Russian government with its critical stance toward his government.

“This is happening not from evil intentions, but from short-sightedness or irresponsibility. From the lack of desire or the inability – during the election campaign fever – to realize the consequences of their dangerous initiatives,” Mr. Poroshenko said in his August 24 address, referring to the local elections scheduled for October 25.

“What do I have in mind? For example, attempts to declare military campaigns against Kyiv, or the opposite, calls for an immediate victory march towards Moscow. Striving to undermine approved amendments to the Constitution, or to bury the Minsk accords, including the demand to denounce them,” the president said, referring to the radicals’ calls.

The Independence Day commemorations began on August 22 with the president’s visit to Chuhuyiv, where he said he dispatched the largest supply of military equipment in Ukraine’s history to the separation line, including tanks, armored personnel carriers, howitzers and artillery.

Also at Chuhuyiv, Mr. Poroshenko launched a campaign that renews the Kozak military tradition of presenting flags as gifts bestowing honor. He kneeled before the flag of an aerial assault brigade and kissed it.

On the eve of Independence Day, the president participated in a ceremonial raising of the Ukrainian flag at St. Sophia Cathedral as part of the annual national Flag Day marked on August 23. An exhibit of battle flags from the Anti-Terrorist Operation (ATO) was unveiled at the same event.

That same evening, the president gave state awards to ATO veterans at the Presidential Administration.

The next morning on Independence Day, 14 ATO commanders participated in the renewed Kozak military tradition in which they kneeled before battle flags with the presidential “For Courage and Bravery” distinction, marked by a ribbon, and kissed them before accepting them as awards.

“The traditional battle flag is crimson and decorated with St. Michael’s Warrior Cross, but such are the demands of the time,” Oleksandr Palii, a Kyiv political insider and author, said of the flags.

The president began the day by attending a divine liturgy at St. Sophia Cathedral with his wife and three of his four children. The president and his wife, joined by other notables, then placed flowers at the monument to Taras Shevchenko. 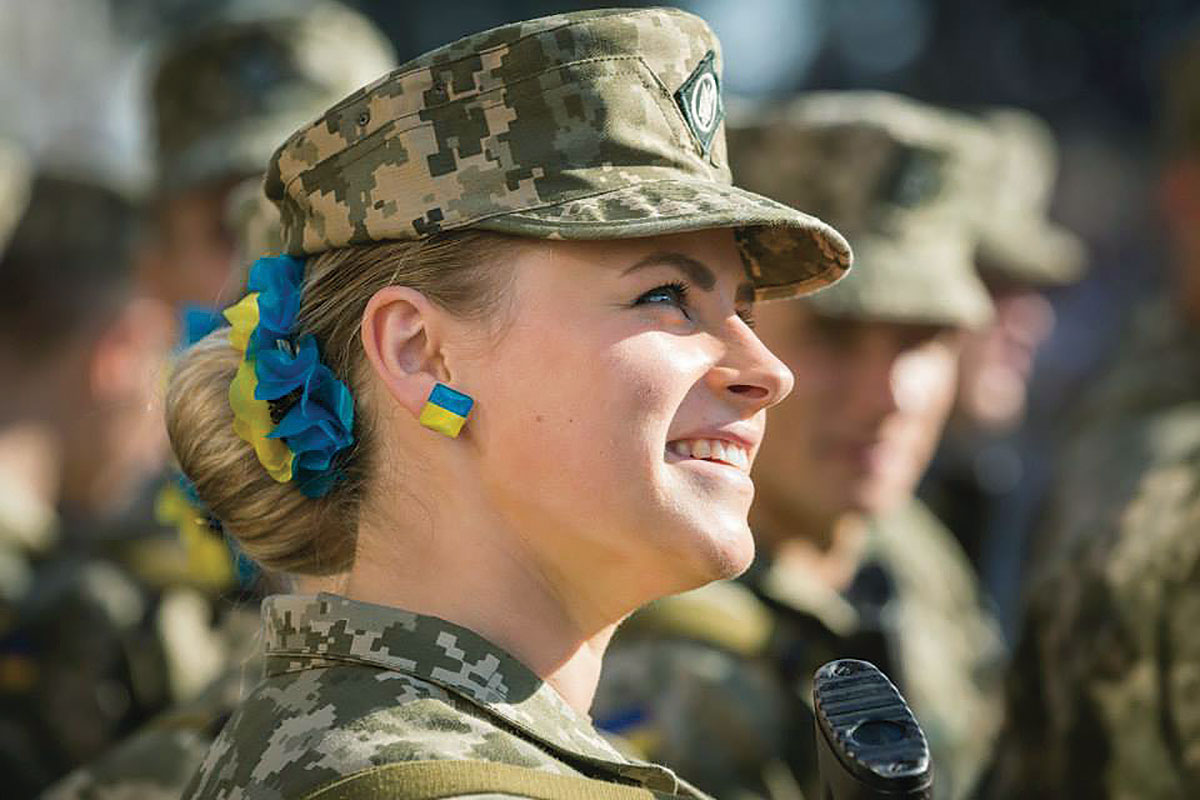 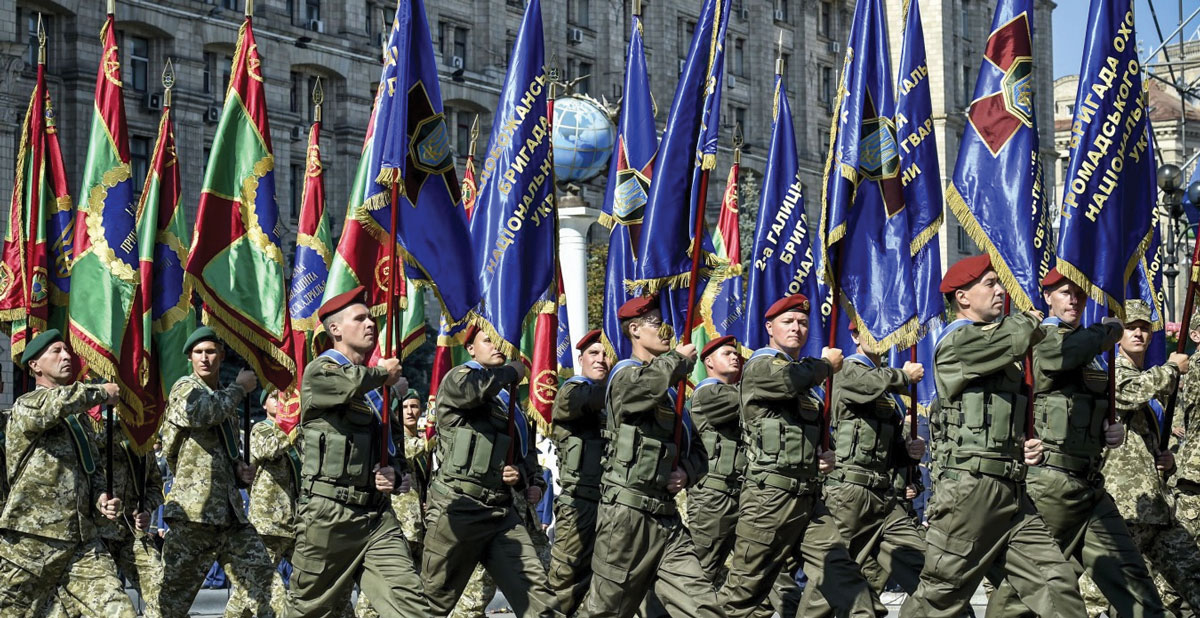 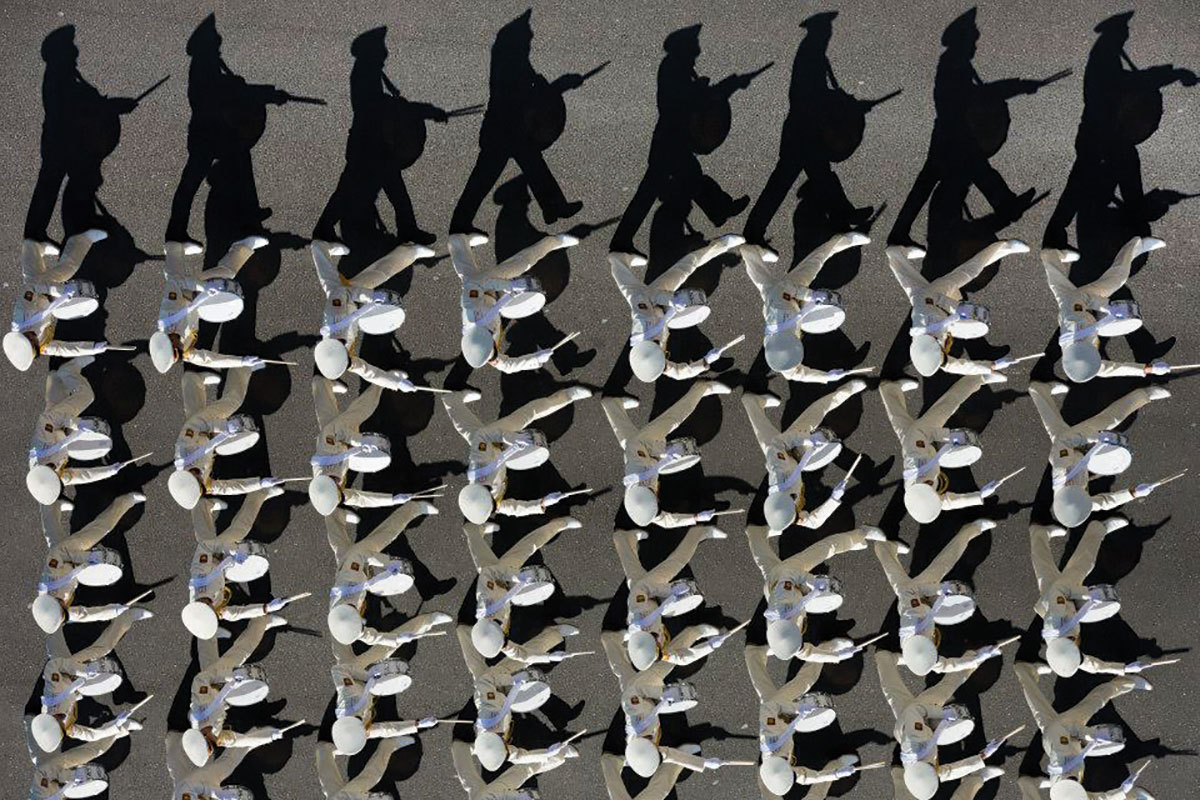 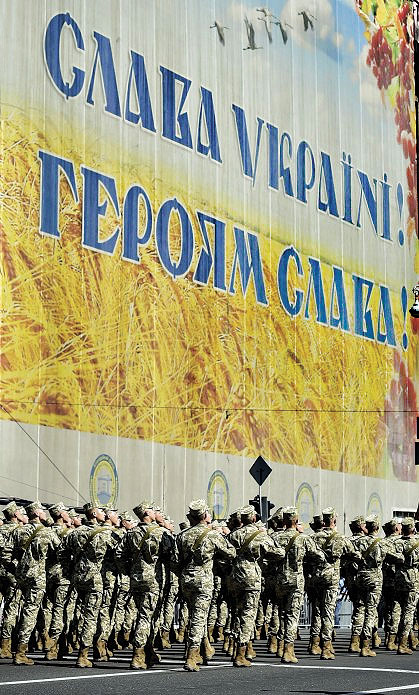 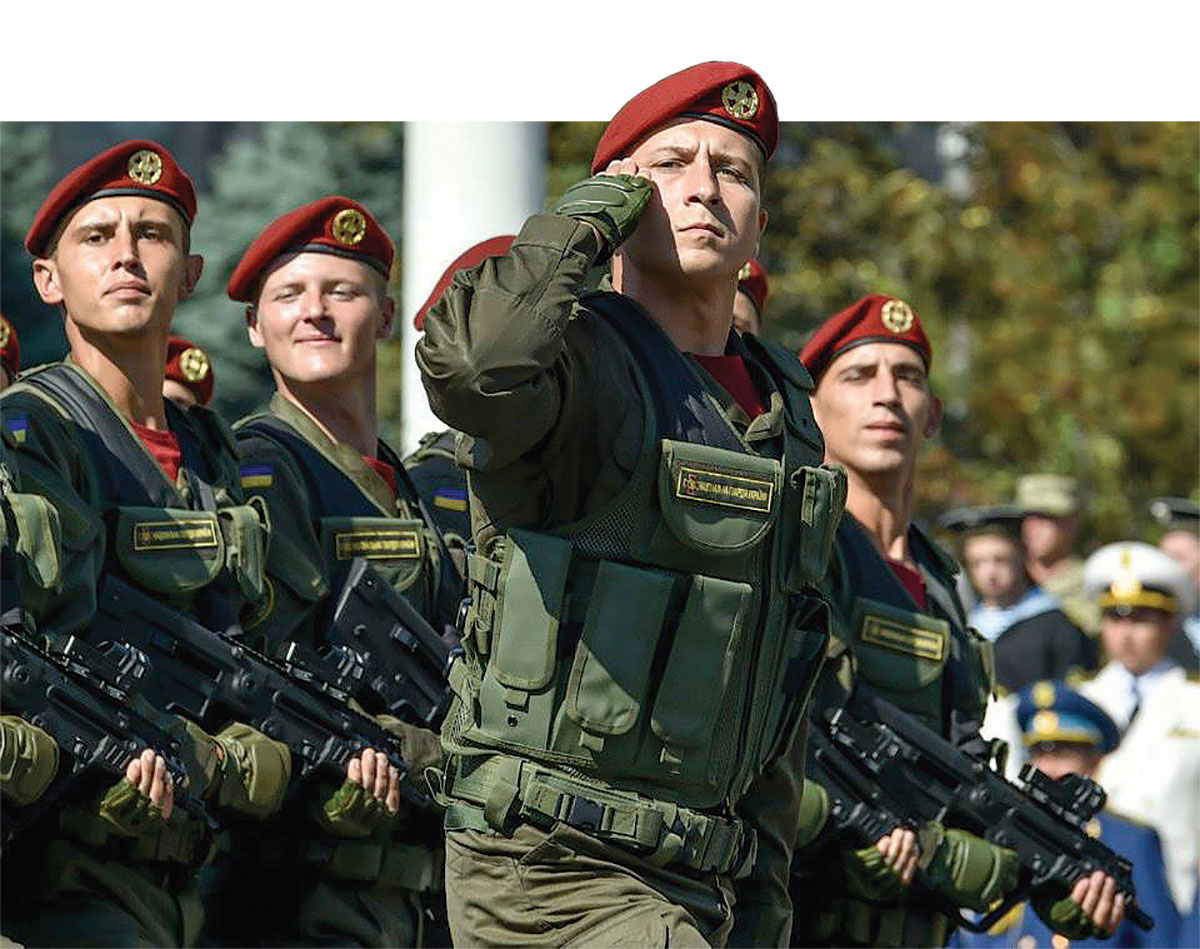 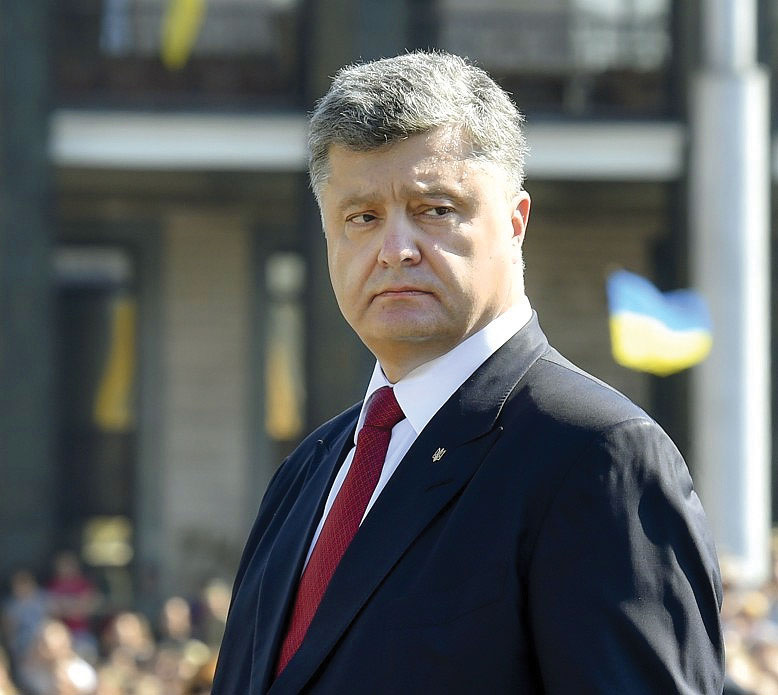 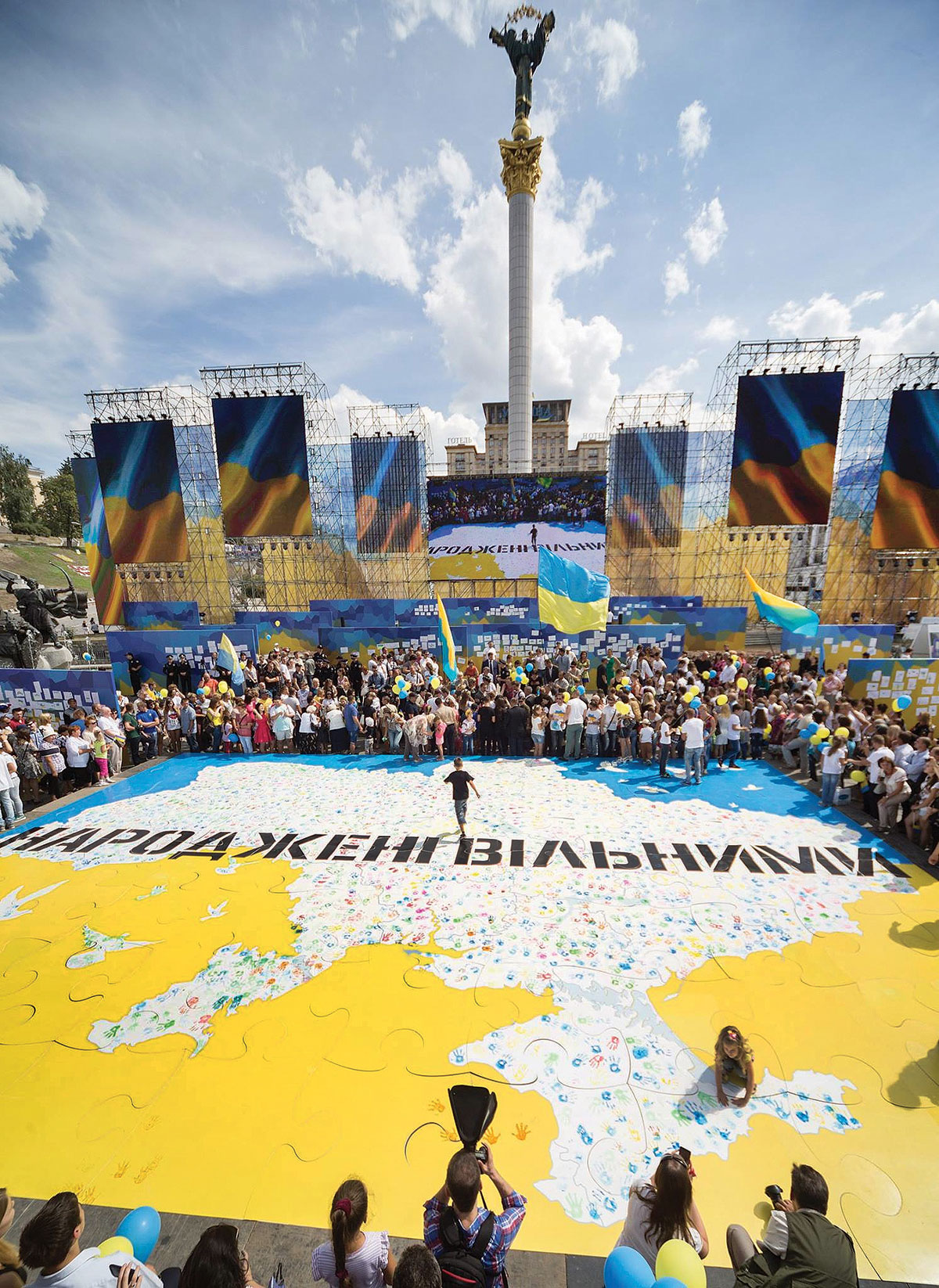 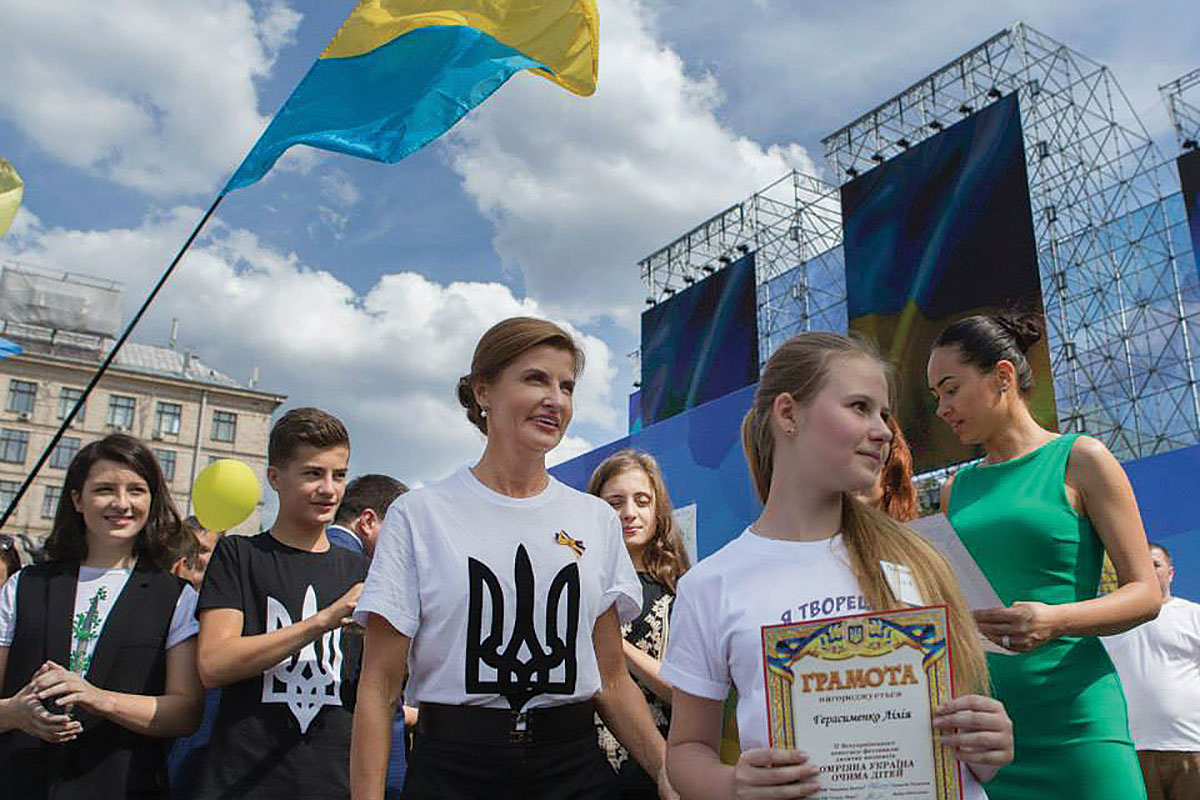 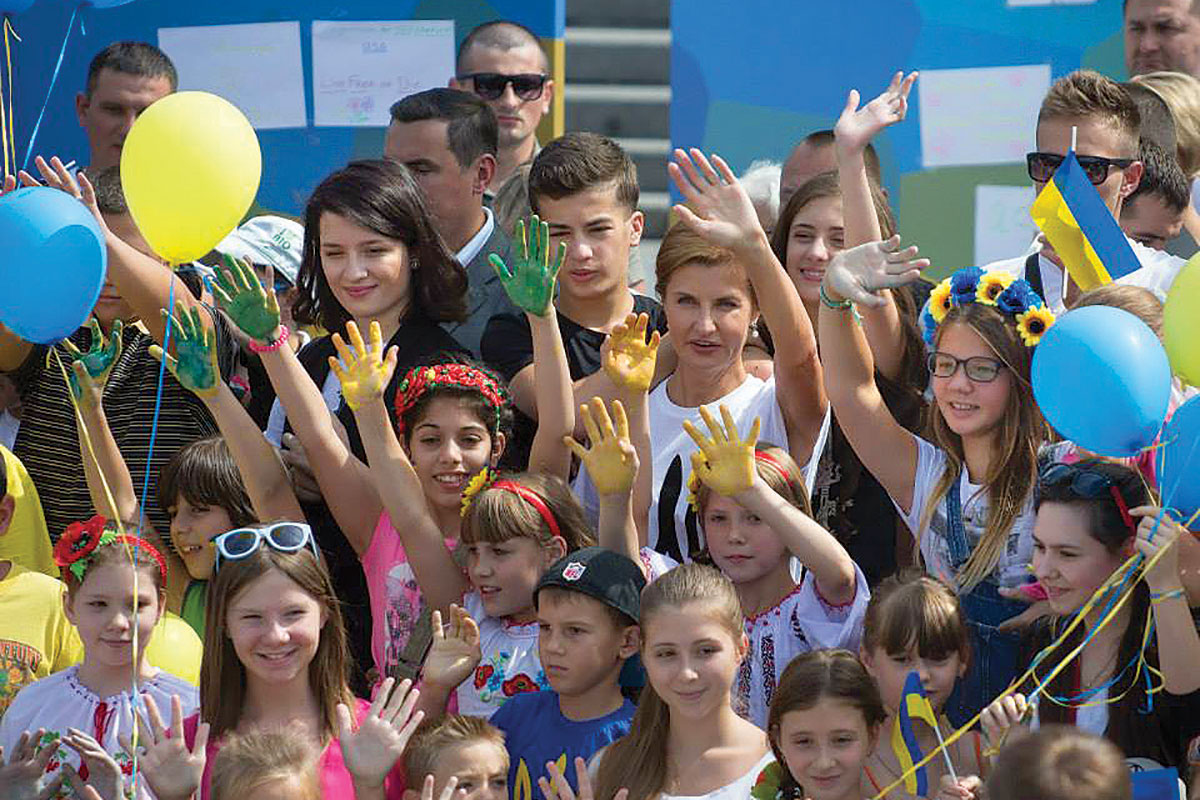