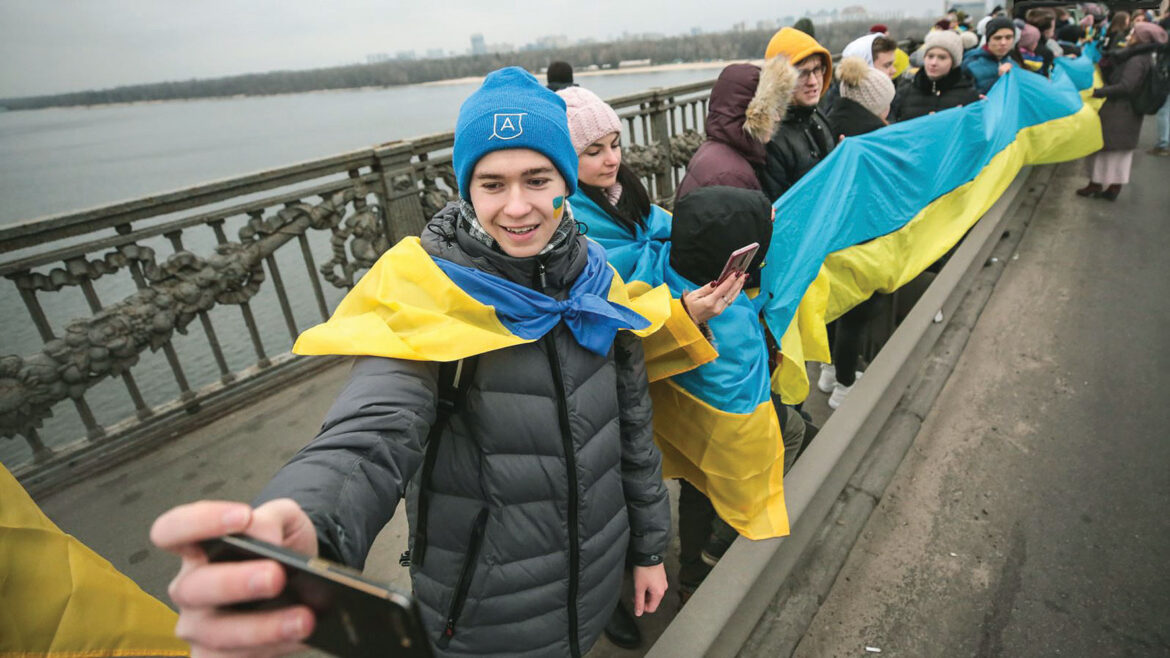 A human chain on January 22 links people along the Paton Bridge in Kyiv over the Dnipro River that bisects the Ukrainian capital, symbolizing both sides uniting when the Ukrainian National Republic was formed in 1919.

KYIV – On January 22 Ukrainians around the country and the world celebrated Unity Day, the day on which in 1919 the nation first declared itself a free and independent state of one united Ukrainian people.

Ukraine’s president and prime minister marked the occasion by taking part in a ceremony honoring the memory of president of the Ukrainian People’s Republic (UPR), Mykhailo Hrushevskyy.
Mr. Zelenskyy laid a bouquet of flowers at the monument for Mr. Hrushevskyy, under whose leadership the Ukrainian Central Rada on January 22, 1919, declared the UPR “an independent, free sovereign state of the Ukrainian people.”

Other small official ceremonies also took place to mark the anniversary, though most events took place online because of the ongoing COVID-19 pandemic. Traditional celebrations were canceled in response to quarantine restrictions that were in place to combat the pandemic. Those restrictions were lifted on January 24.

The official proclamation made in 1919 stated that “the territory of Ukraine, divided over the centuries, today becomes a great united Ukraine.”

“This is the joy of a great unification of not just lands or territories, but the unification of Ukrainians. This is the pride for our ancestors who carried out the Act of Reunification, and with it the eternal dream of all fighters for a united Ukraine,” Mr. Zelenskyy wrote on Facebook on January 22.

The president noted that the unification of Ukraine did not last. “It’s a pity,” Mr. Zelenskyy wrote on Facebook. “Because statesmen did not have enough wisdom and understanding then to preserve an independent Ukraine. This is pain. A hundred years later, Crimea and part of Donbas were separated from a united Ukraine. And there is confidence that in the future we will be able to overcome everything and together we will become the creators of a new act of union,” Mr. Zelenskyy wrote.

The president also sounded a confident note that the country will overcome its current division. “Enough divisions,” he said. “One of the oldest dreams of our people about unity is a fundamental dream. But it cannot be achieved once and for all. This is a permanent job and a daily movement. This is not something in the past, not an ideological framework from above, and not an achievement that can be simple,” Mr. Zelenskyy said.

Three decades ago, on the 71st Unity Day anniversary, Ukrainians created a human chain from Kyiv to Lviv. According to various estimates, between 500,000 and 3 million Ukrainians took part in commemoration.

In 2013, on November 29, the day of the summit in Vilnius, where former Ukrainian president Viktor Yanukovych was expected to sign the EU-Ukraine Association Agreement, another chain of unity took place, from Kyiv to Poland. The event was initiated after Mr. Yanukovych’s pro-Russian government announced that he would not sign the EU Association Agreement. The route took place from Kyiv via Zhytomyr, Rivne, Lviv, to the Polish border checkpoint. About 300,000 people participated in that commemoration.

Due to the pandemic, this year Ukrainians were invited to join the virtual chain of unity that united Kyiv with Simferopol. The creation of the chain began on January 21 and was made using participants’ Facebook profile pictures that were placed on a map and stretched from Kyiv to Simferopol. The chain symbolically crossed the Dnipro River five times: on the Paton Bridge in Kyiv, where the chain of unity has traditionally begun, in Cherkasy, Kremenchuk, Dnipro and Zaporizhia. Some 40,500 people joined the online campaign.

The United States embassy in Kyiv also commemorated the day and specifically called on Russia to recognize Ukraine’s sovereignty and territorial integrity.

“On Ukrainian Unity Day, we again call on Russia to respect Ukraine’s sovereignty and territorial integrity within its internationally recognized borders, including Crimea and the Donbas and extending to its territorial waters,” the embassy said in a statement.

The Ukrainian Congress Committee of America (UCCA) also joined in the commemoration by holding online events that were led by local officials in Chicago and Philadelphia. Ukrainian World Congress President Pavlo Grod joined the event online. Part of the program took place in front of a monument to fighters who gave their lives fighting for the freedom of Ukraine at the Ukrainian Catholic Cemetery of St. Mary at Elkins Park in Jenkintown, Pa. The program included a solemn memorial service and a funeral ceremony at the grave of Lonhyn Tsehelskyy, former internal affairs secretary of the Western Ukrainian People’s Republic.
The sermon was delivered by Borys Gudziak, archbishop of Philadelphia and metropolitan of the Ukrainian Greek Catholic Church in the United States. The program included video greetings of honorary guests and high-ranking officials, including the ambassador of Ukraine to the United States, Volodymyr Yelchenko.