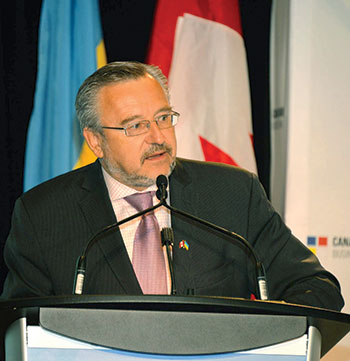 Zenon Potoczny, president of the Canada-Ukraine Chamber of Commerce.

Special to The Ukrainian Weekly

OTTAWA – The doors to further trade deals may be closed once President-elect Donald Trump takes office on January 20, but Ukraine could have an exporting path to the United States via the Canada-Ukraine Free Trade Agreement (CUFTA), according to a Ukrainian Canadian member of Parliament.

Zenon Potoczny, president of the Canada-Ukraine Chamber of Commerce.

Borys Wrzesnewskyj, who represents the Toronto riding of Etobicoke Center for the governing Liberals in the House of Commons, said in an interview that Ukrainian businesses operating in Canada under CUFTA would be able to take advantage of the North American Free Trade Agreement (NAFTA) that includes Canada, the U.S. and Mexico.

“A company located in a place like southern Ontario would have access to the U.S. market,” said Mr. Wrzesnewskyj, who was in Kyiv in July when International Trade Minister Chrystia Freeland – his Liberal Ukrainian Canadian colleague – signed CUFTA with Ukrainian Economic Development and Trade Minister Stepan Kubiv.

But such an entrée won’t be that straightforward, according to the president of the Canada-Ukraine Chamber of Commerce (CUCC).

That could prove to be an invaluable trade route for Ukraine to penetrate the lucrative American market, particularly if President-elect Trump carries the protectionist rhetoric from his election campaign into his administration next year.

CUFTA has not yet been ratified.

Earlier this month, Minister Freeland introduced legislation in the House to implement the agreement that will reduce almost all duties on Ukrainian imports to Canada. Given the all-party support for CUFTA, it will likely get the parliamentary green light in Canada.

Mr. Potoczny expects that to occur – in Canada and Ukraine – either by year’s end or early in 2017.

In the meantime, he has been busy promoting the Canada-Ukraine Trade and Investment Support (CUTIS) project that Ms. Freeland unveiled last December.

The CUCC is a partner in the five-year, $13.6 million (Canadian – about $10 million U.S.) initiative to assist Ukrainian small and medium-sized enterprises in accessing Canadian and other global markets. CUTIS will also serve as a complementary vehicle to CUFTA.

“We will help Ukrainian businesses, which don’t have resources or the expertise to jump into the free trade agreement, sell to Canada through producing market materials for them and have them attend trade shows in Canada,” said Mr. Potoczny. “We hope to find the right product or service Canada wants and find the right Ukrainian company to provide it.”

The CUCC has identified more than 100 Ukrainian companies eager to take advantage of this initiative and, ultimately, CUFTA.

But that trade agreement was not a sure thing, according to Mr. Wrzesnewskyj.

“There were all kinds of problems at different points,” he said about the negotiations, which began in 2010 under Canada’s then-Prime Minister Stephen Harper’s Conservative government.

Mr. Wrzesnewskyj declined to elaborate on the obstacles, and deferred to Minister Freeland, who was unavailable for comment.

However, Mr. Potoczny said that talks stalled when officials in President Viktor Yanukovych’s pro-Russian government displayed little interest in establishing a trade pact with Canada. “They were stealing time and playing games, and were not seriously negotiating,” Mr. Potoczny explained.

During his previous trips to Ukraine, he also heard serious concerns about the proposed trade agreement.

Mr. Potoczny said that Ukrainians had many questions about Canada’s supply management system, which allows Canadian farmers to negotiate the price of milk, eggs and poultry, and sets quotas for how much of these products are imported into Canada.

“Ukraine wanted to have a totally open market in Canada to sell its chicken and eggs, but at the end of the day agreed to annual quotas,” Mr. Potoczny explained.

Negotiations concluded last year, and Mr. Harper took the opportunity, during then-Prime Minister Arseniy Yatsenyuk’s first bilateral visit to Canada in July 2015, to announce that Canada and Ukraine had reached an agreement.

But Mr. Harper never got the chance to sign CUFTA after the Trudeau Liberals toppled his Conservative government in a general election three months later.

It was left to Ms. Freeland, as Prime Minister Trudeau’s international trade minister, to finalize the pact on Canada’s behalf over eight months since being sworn into her Cabinet post when the Liberals took office last November.

“Chrystia made it a priority and made it happen for a bunch of reasons, despite the fact that it would have been easy to have it sit there and put on the stove for another two or three years because of the modest amount of trade between the two countries,” said Mr. Wrzesnewskyj.

“But the agreement sends a clear signal to Russia that we will continue standing shoulder to shoulder with Ukraine while it is under threat,” he added.

Prime Minister Trudeau delivered the same message to Ukrainians when he made his first official visit to their country in July and witnessed the signing of CUFTA, telling President Petro Poroshenko afterward that “Canada will always stand by Ukraine.”

The Trudeau government also sees CUFTA as a way to show support for Ukraine’s efforts to build its economy, said Mr. Wrzesnewskyj.

“It not only shows our confidence that Ukraine is heading on the right path, but it provides opportunities for Ukraine in both trade and investment,” he explained.

It also provides opportunities for Canadian businesses looking for a cost-effective gateway into the lucrative European market, which Canada will soon have access to once a trade agreement with the European Union, signed in late October, is ratified. The Canada-EU Comprehensive Economic and Trade Agreement is massive, and will give Canada access to a market of more than 500 million people in 28 countries, with a combined GDP of more than $14.9 trillion (U.S.).

CUFTA, of course, involves trade between only two countries, which amounted to nearly $207 million (U.S.) last year, and most of that was Canadian exports to Ukraine.

The benefit for Canada, in Mr. Wrzesnewskyj’s view, is that small and medium-sized Canadian businesses can set up a plant or facility in Ukraine and operate it at a much lower cost than in an EU-member nation, such as France. A Canadian business can use Ukraine as its home base in Europe, and tap into the broader continental market through the free trade agreements Canada and Ukraine have both signed with the EU.

Ukraine also has Europe’s third-most educated workforce, noted Mr. Wrzesnewskyj, who expects that CUFTA will also provide a boost to both Ukraine’s and Canada’s strengths in the agricultural and food-processing sectors.

“For centuries, Ukraine was a breadbasket country that had a capacity to produce vast amounts of food, and now has tremendous potential to return to that position,” he explained. “Canada has that potential too since in many ways it is looked upon as an incubator for new products and new ideas in the food-processing industry.”

Most importantly for businesses in Canada and Ukraine, CUFTA will significantly reduce the cost of importing and exporting.

When the agreement comes into force, Canada will drop duties on 99.9 percent of Ukrainian imports. Ukraine will eliminate tariffs on about 86 percent of Canadian exports, with duties on Canadian agricultural exports to be phased out or reduced over a period of up to seven years.

CUFTA will also provide companies with preferential access to procurement opportunities at the central or federal government level in both countries. Under the treaty, Canadian companies could bid on Ukrainian government projects as well as those tendered by public enterprises, such as airports, the postal system and public transportation, including rail and subway.

Ukrainian companies will technically be able to do the same in Canada. Although it’s more likely this government-procurement provision will benefit Canadian firms seeking opportunities in Ukraine.

“Ukraine is in the midst of improving every single piece of infrastructure, so there are a lot of possibilities for Canadian companies,” said the CUCC’s Mr. Potoczny.

He also believes CUFTA could help Ukraine tackle corruption, which according to a recent report by Transparency International, remains a huge problem.

In a survey of almost 62,000 people in 42 European and Central Asian countries, 86 percent of Ukrainians rated their government as doing a bad job at fighting corruption, ranking Ukraine at the top of that list.

CUFTA devotes an entire chapter to transparency, and a section outlining measures to combat bribery and corruption in trade and investments by criminalizing such activity.

Those provisions, along with another made-in-Canada chapter on labor that gives workers the rights to join unions and collective bargaining, and sets out employment standards, such as minimum wages and overtime pay, could also serve as a model for Ukraine domestically, said Mr. Potoczny.

“Those are values we are used to in Canada,” he explained. “But now, through the free trade agreement, Canada can pass along some of those values to Ukraine and the Ukrainian people.”