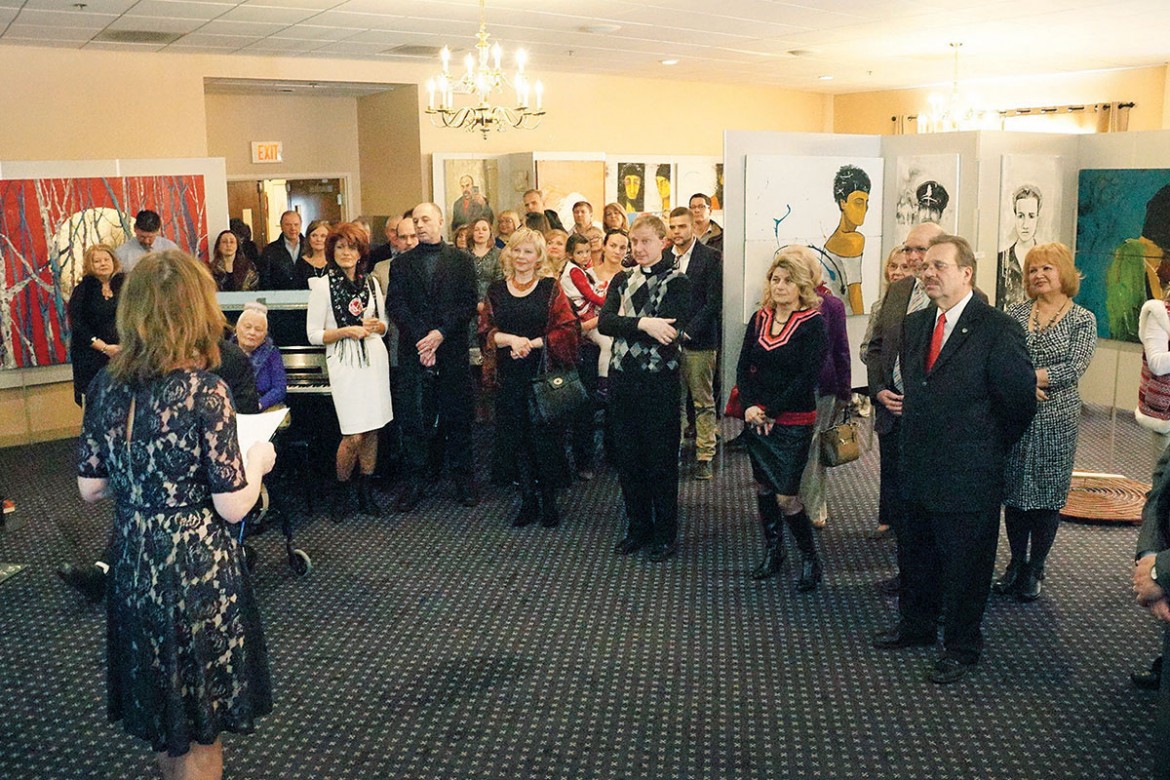 At the opening of the exhibit “Ukraine Exists” at the Ukrainian American Cultural Center of New Jersey, community activist Roksolana Vaskul Leshchuk addresses the audience.

WHIPPANY, N.J. – “Ukraine Exists” was the title of a unique exhibit of art by contemporary artists from Ukraine accompanied by videos of interviews recorded in the country’s war-torn eastern regions whose aim was to depict Ukraine’s current reality of war and peace, as well as to demonstrate Ukraine’s desire to take its rightful place as a full-fledged member of Europe.

Dubbed a “Project of Truth and Art,” the exhibit was presented in two parts, comprising contemporary Ukrainian art and documentary materials from the years 2014-2015.

A project of the charity fund Wilni UA, Ukraine’s Ministry of Foreign Affairs and the Alina Haieva Creative Agency, the exhibit was shown at the Ukrainian American Cultural Center of New Jersey (UACCNJ) from January 31 through February 14.

Its message was outlined in the exhibit brochure: “Through internal and external challenges, overcoming the war, economic and political crises, we are developing. Ukrainian society, culture and art are developing. We are proving that Ukraine is part of the civilized world. We are the state which is tearing itself away from the Soviet past and aiming to fill a significant place in the global states’ family.” 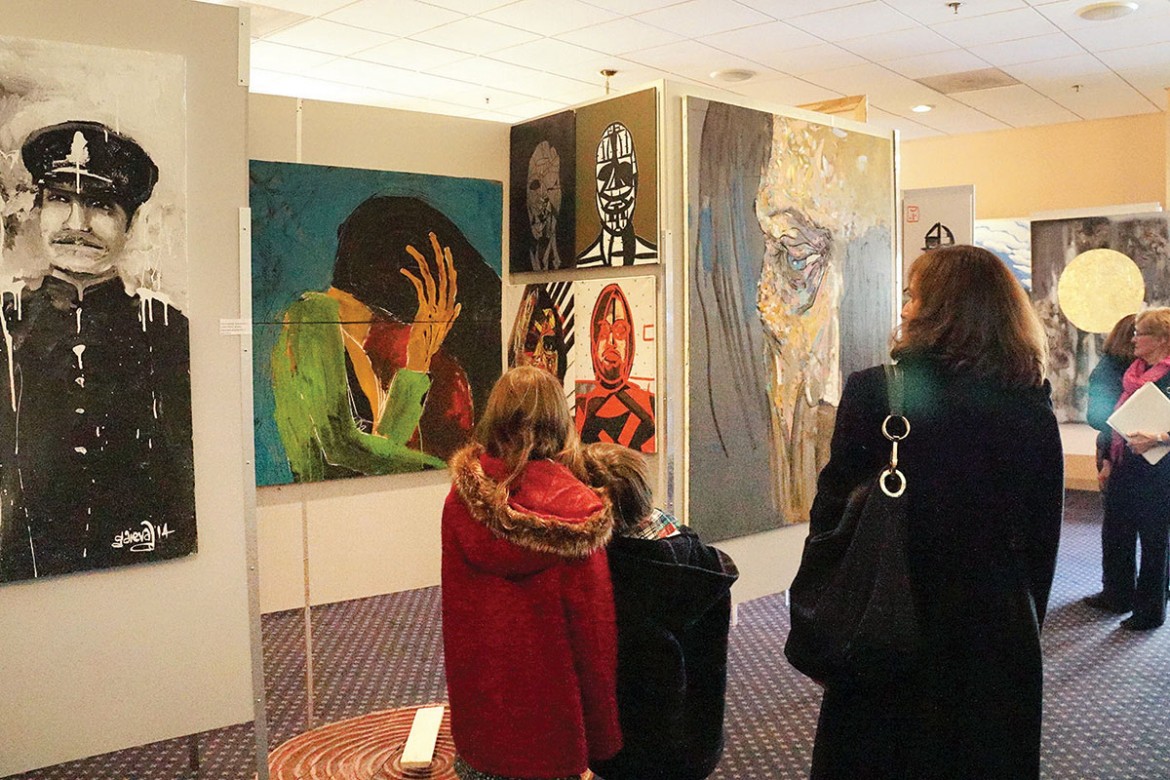 Visitors view the works on exhibit.

The multimedia exhibit was previously on view at the United Nations (January 8-20). It featured contemporary paintings, installations, posters, embroidery, calligraphy and ceramics, by various artists from Ukraine.

At the exhibit’s opening on January 31, the Rev. Stepan Bilyk, pastor of St. John the Baptist Ukrainian catholic Church in Whippany, opened the proceedings with a prayer. 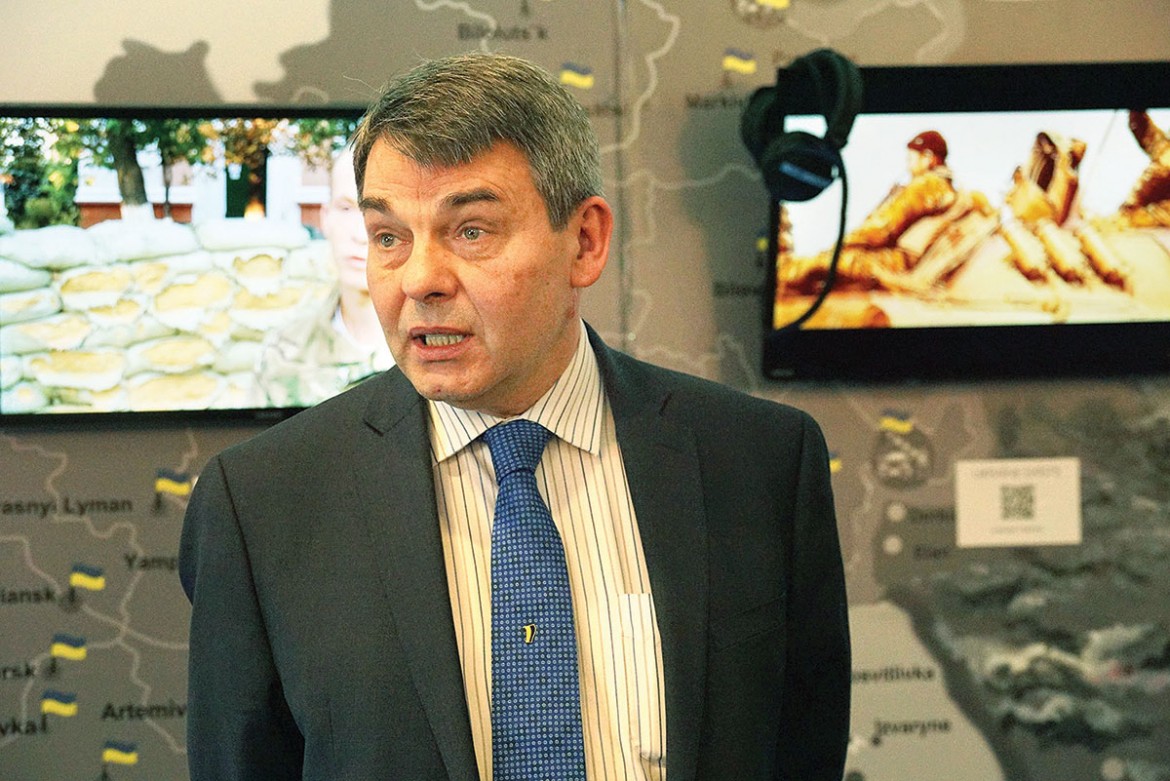 Oleksandr Matsuka of the United Nations Security Council Secretariat comments about the themes of the works on display.

The audience was addressed by Lesia Topolia, the mother of one of the show’s organizers (Taras Topolia), who spoke about the exhibit’s genesis; and Oleksandr Matsuka of the United Nations Security Council Secretariat, who underscored that through their works the artists assert they are not indifferent to the fate of Ukraine and its people. Mr. Matsuka also pointed to the artists’ use of the Ukrainian national icon Taras Shevchenko in a modern-day setting (taking a selfie, participating in the defense of the Maidan), in this way making Shevchenko one of their own.

Other speakers included local community activist Roksolana Vaskul Leshchuk, who was instrumental in arranging the show at the UACCNJ, and Ksenia Rakowsky of the UNWLA’s New Jersey Regional Council. 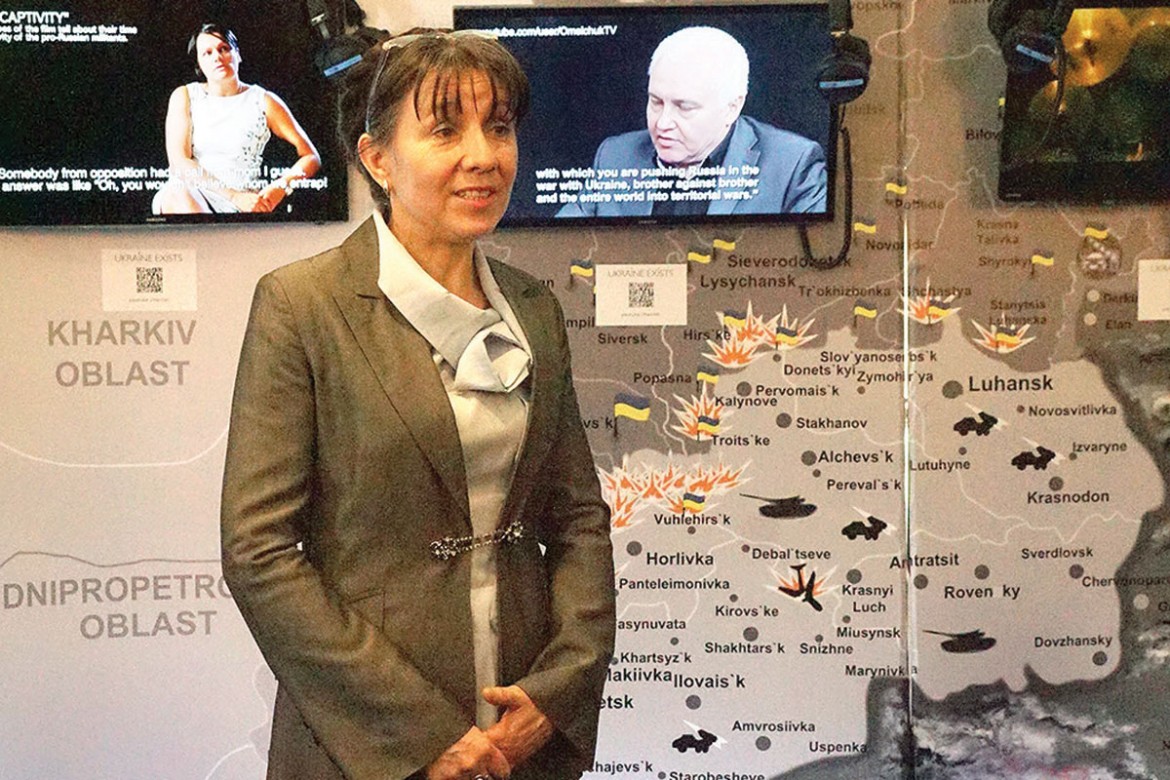 Lesia Topolia speaks about the exhibit’s genesis; she is seen against the backdrop of an installation about the war in the Donbas.

Video presentations on the war in the Donbas covered the lives of both the military and civilians. This documentary work was by Ruslan Horovyi, Ruslan Ganushchak, Victoria Ivleva, Hero UA and OmTV.

Donations received in lieu of an admission fee are to be used to fund humanitarian efforts in the Ukrainian regions affected by war.